Darn, now that's a nice surprise to wake up to! Your husband is one lucky man, Diane! I'll bet the look on his face will be priceless!
Last edited by a moderator: Oct 23, 2014

azdiane said:
... I think maybe I'll get up while he's still sleeping and have the train just chuffing quietly around the little test oval when he gets up.
Diane
Click to expand...

Staff member
That's really good news!
Congrats to you and many, many kudos to Keith.

Diane and her hubby will have a nice surprise gift from me at no charge; I installed an LED under the motor (firebox) that is connected to one of the Tsunami outputs set up for Firebox Flicker. It produces a nice, subtle flicker in the frame area under the firebox that is more noticeable in low light conditions.

Included in the installation is the new Soundtraxx Current Keeper, which will significantly improve the operation of a brass locomotive and their notorious pickup problems.

I got home from the airport and found the box waiting on the porch!

I quickly hid the loco and am now doing my best to look sweet and innocent. I think I'm getting away with it! Tomorrow hubby will be out for a few hours and I will have a chance to play around with it. I feel so sneaky! It's so fun.

A million thank you's to my hero Keith Robinson, who dropped other projects to squeeze me in for this birthday surprise. I'll post a follow-up tomorrow as soon as I can get the little beast on the rails and hear it chuff, ding, squeal, toot, and all the other wonderful things Keith put into it.

Staff member
For some dinky reason, I seem to be as excited about your surprise as you are?
Maybe it's because of the fact that you and hubby are aviators but model trains just as I did before, or maybe I'm just excited because my friend, Keith, was able to help you out when most needed?
Keith called me the day he mailed the package to you and explained what all he did with the firebox light, power pickup and such. We had a very nice long talk about that and other things such as his layout plans, sound installs, and travels.
I cannot praise him enough for the way he handled it all .. I just hope it all works out for you and hubby is Shockley Surprised!

I am so stoked! 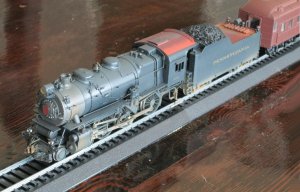 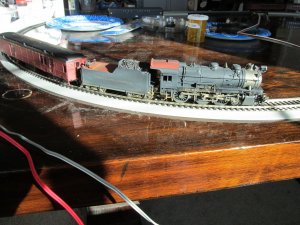 Hi Y'all, this is just a super quick note to say the surprise came off wonderfully. I'll post some details later or tomorrow.
B

Okay Diane, now would be okay to post info. Brian

Wow, that was just perfect !

As I had planned, I got up before hubby did. In and of itself that isn't necessarily unusual at our house as I am a bit more of a morning-person "Lark" than he is. I dug the train out of hiding, and set it up on the little oval of track that now occupies our dining room table to the exclusion of using the table for anything else. I was so nervous I had trouble getting everything on the rails! Maybe ten minutes later I heard him stirring, and he staggered out into the kitchen to grab a cup of coffee.

It's not uncommon recently for one of us to just start a locomotive and a couple of cars running endlessly around on the table, so while I saw him glance over and see a train, and obviously he heard it chuffing in the background, initially he didn't notice that this was a whole new train, and a special one. So he stood there sipping coffee and talking with me about the upcoming birthday gathering. I tried my very best to act normal and keep a straight face. It must have been not more than five minutes, but it seemed like hours before he finally wandered over to the table and did a double-take!

And then, all the effort was worth it! He was ecstatic over it!

Silly, isn't it, a 72 y/o man getting all excited about a model of a real train he used to ride sixty years ago. Silly that his wife got weepy teary in joy over his reaction. Only here, among my peers who share the life-changing psychological disorder of addiction to model trains would I be likely to find understanding.

Thank you all for sharing this wonderful moment with me. Thanks especially to Keith Robinson who made the dcc/sound conversion happen in a narrow time-window. Thanks, more than anything, for so many of you caring about a complete stranger who showed up asking for help and got it in spades.

Staff member
Wonderful! I was afraid that you would "give away" the surprise, or that he would find it before hand.
NOW, if we just had a video of when he realized what he was looking at!
B

Diane, it sounds like the plan worked flawlessly and in such a short time. You did a wonderful job, congratulations! NOW, (not to be pushy) what are the dimensions of that extra room you mentioned? The location of the door, closet and window would be handy as well. Once again, job well done!

azdiane said:
And then, all the effort was worth it! He was ecstatic over it!

Silly, isn't it, a 72 y/o man getting all excited about a model of a real train he used to ride sixty years ago. Silly that his wife got weepy teary in joy over his reaction. Only here, among my peers who share the life-changing psychological disorder of addiction to model trains would I be likely to find understanding.
Click to expand...

Not silly at all. Glad we were able to help. Glad it all came together for you!
P

OK, now this has got me stumped. In all the other photographs of G-5 locomotives I have seen I have never before seen a second side-window in the cab, as appears to be what we are looking at on the two nearest locomotives. Anybody got a clue about this modification?

I also find it curious that all the locos are nearly the same color pale gray. I'm guessing that when the LIRR went to gray passenger cars they painted the locos the same gray color. Notice the side rods are painted. Anybody know anything about painting the LIRR G-5s like this? 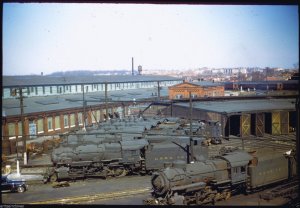 The harsh acids in the coal dust faded the black engine color.

Your question has prompted me to do some research on the G-5. It appears as though the appropriate engine numbers were 30 through 50.

Looking through numerous related websites, engine number 117 in the background was manufactured in 1902 and given the model number G52-simple, manufactured by Burnham Williams and Company.

I was only searching the Long Island road name and ignored the PRR stuff.

Maybe they called these G-5's, too. Anyway, if anyone finds other resources on this, please chime in.