I recently started making some things that are not so readily available on the HO scale market. Ive been using Shapeways and their 3D Printing to create some pretty neat little details so far that I have not really seen in HO scale.

Here are a few pics of some of the models ive created so far on Shapeways. Ive got several more ideas and ill be making them and uploading them as I have time to design the 3D models (which is pretty time consuming might I add). 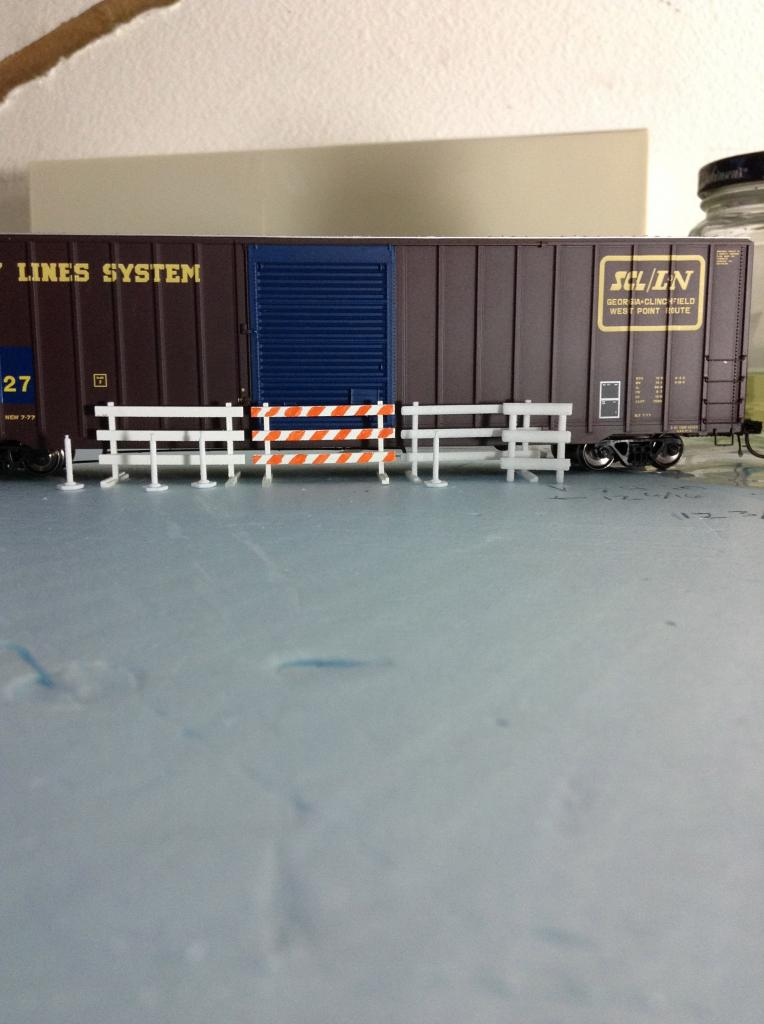 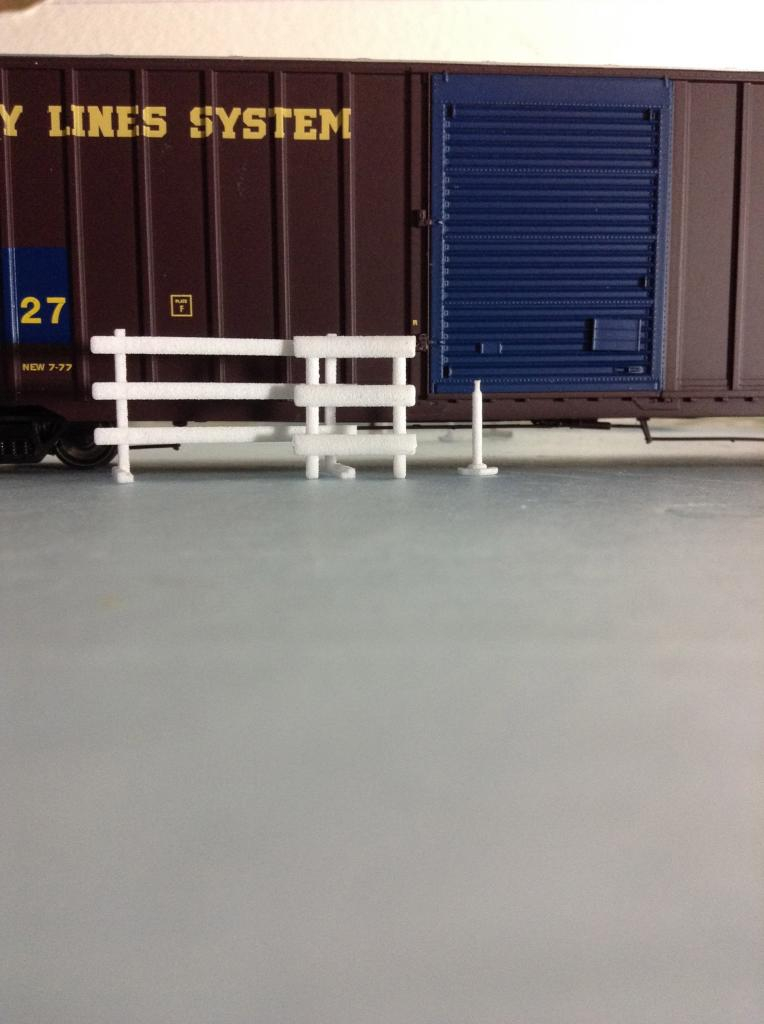 I attempted to paint one of the barricades using some A-line semi Trailer "Rib" Masking tape. But this proved to be harder then I had thought and the paint bled under the tape and resulted in a pretty sloppy paint job for the simulated diagonal striping. So Ive since painted the 3 boards on the barricade a solid orange and will apply some MicroScale "Barricade 45 degree" white striping to them.

So far ive got the following models uploaded and available on Shapeways website, all of which are very close to actual scale (besides having to thicken some of the components to make them able to be strong enough to print and be handled)

1. A 4' wide Type III Barricade w/o Legs.
2. A 10' wide Type III Barricade w/Legs
3. A 48" Tall Delinator "Grabber" Traffic cone with a 16lbs rubber base. Notice in the picture above the "handle" on the top of the cone which gives it the name "the Grabber". I was pleased to see that Shapeways got that tiny detail successfully printed ontop of this already TINY creation.

If your interested, you can check out my store on Shapeways HERE
Ive got the barricade available as a single barricade, a 5-pack, and a 10-pack.
The Delinator cone I still need to fix and update the file to Shapeways since they changed their pricing which resulted in a massive price increase. Will just have to connect all 10 cones for the 10pack on a "tree" so that the cost will go back down and be reasonable.

Its my plan to make models of 4', 8', 10', and 12' wide Type III Barricades having separate models for ones that include legs and ones that are without legs. I figure the ones without the legs can be leaned up against something on a construction site and be stacked or put in the back of a pickup truck or larger flatbed bobtail truck for loads.

All these models have to be hand painted, which can be pretty tricky if you dont have steady hands and a well lite painting area since they are so small.

Here is a picture of some painted ones ive done so far. As mentioned above I painted the boards orange (used BNSF Heritage Orange) and the angle irons or "feet" with a flat aluminum color. All I need to now is apply the microscale barricade stripes. Also did one of the 48" Delinator cones, painted the same orange color and used black for the rubber base. 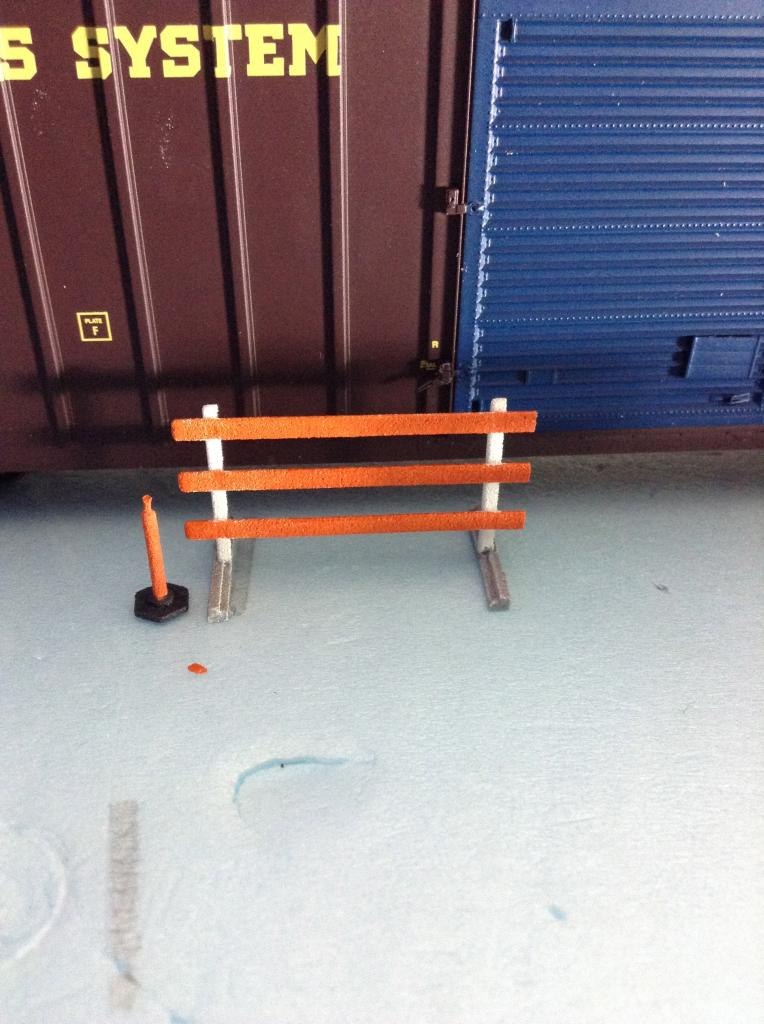 When I get the decals in the mail from MircoScale ill post another picture with the stripes on the painted barricade. Thinking it should turn out pretty well. In the meantime, would be interested to hear what you guys think? Have any of you made your own models and uploaded them to Shapeways? Ive got a million ideas for things Id like to do, but finding the time to create them seems to be a bit of a challenge lol

I saw this in a magazine thought it looked pretty good. Kind of pricey but pretty nice at the same time.