Hello fellas. What would you reccomend for a guy to use in order to play with ideas for a future layout? I don't know when it can happen, I just know I have concepts in mind now. Do you like the CAD type programs, or something else? 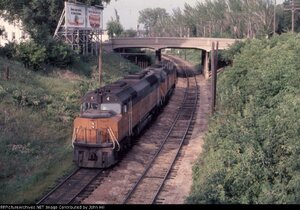 There are several CAD programs out there , and I wouldn't think about building a layout without first designing it in a CAD program. A CAD program will force you to deal with reality before you build it.

I designed mine in CAD and found it was just to stale for my taste and so I redesigned it a second time and was much happier. It was well worth the pain of learning the software .

I just doodled on paper. But I have always found the learning curve on CAD systems to be too time consuming.

Do you have any experience with CAD? If not, the learning curve can be steep, particularly if you want to see how things will look in 3D, and things like that. I have I very old CAD program, that I'm not even sure runs, or is compatible with windows 10/11, or whatever the latest is from Microsoft.

Doodling on paper could be a start, if nothing else. I'd also say to 'recycle' old layouts/tables from old layouts, as it will save time, in terms of building new, as you get older, assuming you remain in the hobby.

Do you have a layout size in mind? There are a lot of publications, print/electronic out there to perhaps give you a start on layout style.

2Tracks said:
Do you have a layout size in mind? There are a lot of publications, print/electronic out there to perhaps give you a start on layout style.
Click to expand...

Not really. I had in mind to plan for a typical bedroom size (US style) but leave a way to accomodate different sized rooms, if that makes sense.

Well, heck, I may as well talk about this a little bit.

The general idea is St. Paul to the west. In my mind, the Twin Cities was the final stepping-off point for the westbound transcontinental trains. Trains from Chicago would take or drop a handful of cars in St. Paul and continue on to the west coast. The goal of this concept is to capture the express transcontinental traffic, as well as the slower regional and local traffic. The golden point of this concept is that any traffic I can think of is fair game.

#1. Western Avenue Interchange & Chestnut St. Yard. As far as I'm thinking, this will be represented by staging, perhaps even a modeled, on-layout yard. Last, but not least, this will serve as the origin and terminating point for a huge portion of automotive freight to and from the St. Paul Ford plant.

#2. Short Line & Short Line Hill. This is a local landmark of the Milwaukee Road! A definite must-have on a Twin Cities layout.

#3. Malacester District. Freight traffic in and out. May be omitted from operation, depending on space.

#4. Minnesota Transfer. A very critical yard within the Twin Cities, used by several railroads to interchange. This is one of two interchanges which grant relevancy to my Burlington Northern motive power.

#5. GN/NP/BN, CNW, Soo interchange. Again, relevancy for my Soo & BN power to be on the layout bringing cars to interchange.

#12. Hopkins & Points west. For now, the end of my layout. Depending on space concerns this is subject to change. I'd love to push the railroad out west into the farmlands. Either way, this puts the West in Twin Cities & West!

Ambitious plan here. I am not wanting to be negative but it will be tough to fit it all into a bedroom sized layout room. Familiarize yourself with noted layout designer John Armstrong's concept of "Givens and Druthers". Givens are the constraints the railroad must exist in, the first two on the list are room size and railroad scale. There may be other self-imposed ones like era, home road or switching/running. Druthers are basically "wish lists". That's the 12 items in your post. However four yards, three interchanges, two switching districts and three scenic highlights cannot really fit into a typical 10' x 12' room. You might fit six of them in with an around the wall with center peninsula layout. However making this list is a very good start. Cross off a few things. The first that comes to my mind is the Mississippi River bridge. I don't know about Minnesota, but the ones down south that I have seen are really large complex structures. With an around the walls layout (removable section across door), you could combine items #1 & #12 into a common yard/staging area. The Hiawatha elevator district might fit well on a peninsula jutting out from a longer wall. The interchanges could be represented by staging spurs that disappear behind scenery, might be tough to stage though.
Good luck with your vision and keep us posted.

Thank you, Willie. Yes, all 12 points will be a lot for any reasonable bedroom layout. I don't really expect to have all 12. Some can also be compressed, such as #9.

Four yards, no. The most important ones to me are #1. Chestnut St. which would be my main yard and Southtown, #7, which would be all of my loco servicing. Any of the others which served interchange/transfer ops won't be represented as full yards, that's just way too much track for no reason. Interchange would be a siding or two with a track that disappears off the layout.

DakotaLove39 said:
Hello fellas. What would you reccomend for a guy to use in order to play with ideas for a future layout? I don't know when it can happen, I just know I have concepts in mind now. Do you like the CAD type programs, or something else?
Click to expand...

Like SantafeWillie, I am a paper doodler. Only after I have doodled something that I like that looks reasonable to I try to draw it more precisely. I also approximate small things with Atlas Right Track software. Have used it since version 1 in 1996 or so. I purchased a full copy of 3D Planit, but despite trying several times it just is totally counter intuitive to me. I cannot even get through the tutorials and understand them. I tried one other program (railCAD? maybe), don't even remember the name but once again it appeared to be written from some other frame of mind rather than a model railroader putting down track, and I gave up on it too.
Last edited: Feb 23, 2021

After much hand doodling, I used XtrkCAD for the final pre-build "plan" on my layout. It has a bit of a learning curve, but if you have some familiarity with computers, it isn't that difficult to learn the basics with the program. It also comes with a number of tutorials, which I'd say are almost essential to learning the interface. After doing that and playing around with it for a while, I was able to come up with a workable design.

In my opinion, one of the greatest advantages of using the software was the ability to input the dimensions of my room, including closets and doors, and then see what would fit. Xtrk allows you to specify things like minimum curve radius, turnout brand and type, and whether you want easements. I had a goal of 28-30" minimum radius curves, and it really opened my eyes as to what I could do. You can also fairly easily copy sections, such as yard ladders, and see what will work with your space, or how rotating a section, adding an easement, or using a curved turnout will affect things.

Plus it's free. One thought, however, hopefully you have a large computer monitor, it would probably be difficult to use on a laptop or small screen. Good luck to you, I had a 13x15' room to work with, and couldn't be nearly as ambitious as you appear to be thinking.

And finally for some color, you had me looking through my pictures to see if I have anything from that area. Here's one of where I think part of the Chestnut Street Yard used to be. Nice day, good light, and of course not a single train went by while was there. -Eric 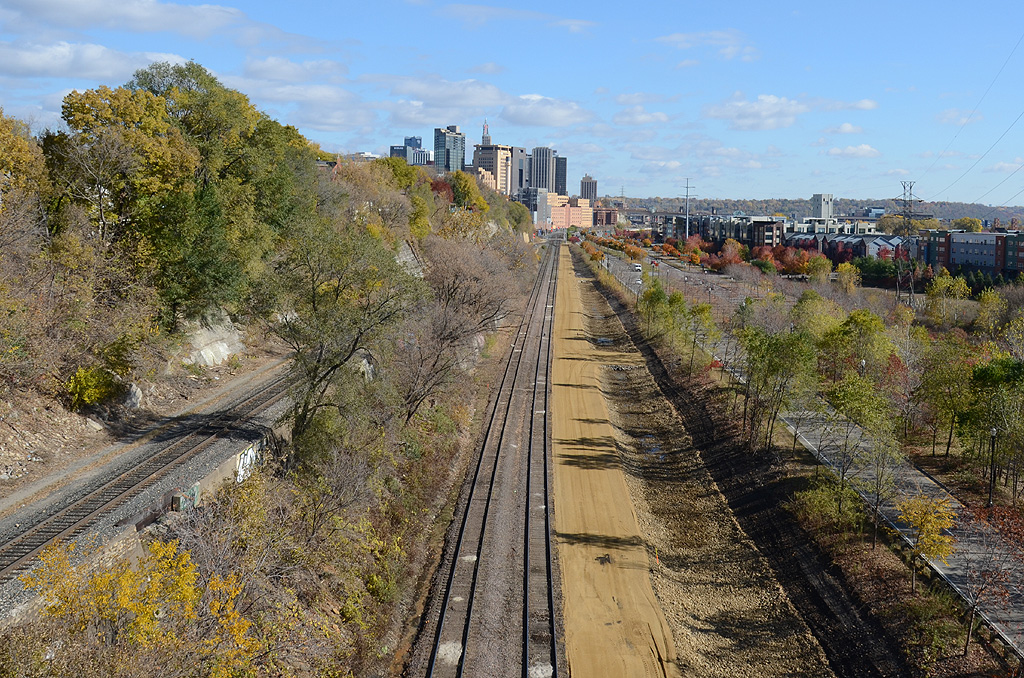 santafewillie said:
I just doodled on paper. But I have always found the learning curve on CAD systems to be too time consuming.
Click to expand...

skyliner said:
And finally for some color, you had me looking through my pictures to see if I have anything from that area. Here's one of where I think part of the Chestnut Street Yard used to be. Nice day, good light, and of course not a single train went by while was there. -Eric

You nailed it. That's the beginning of the MILW Short Line on the far left, there.
Here's the same area, looking the opposite direction, back in the day when it was still double-track. Photo is from my friend and fellow clubber Greg. 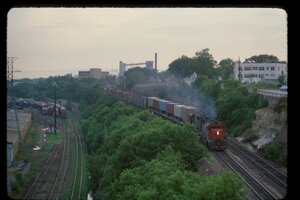 I had a 13x15' room to work with, and couldn't be nearly as ambitious as you appear to be thinking.
Click to expand...

Fortunately my time with North Metro club has taught me a lot about what I like, and what I don't like. Ideally my future layout would be similar but much smaller (Our layout there occupies a 50x100ft room, with most of the floor occupied by free-standing layout which also links to two shelf layouts along one wall.)

Honestly It's been my experience that no one models Milwaukee in the Twin Cities, which is a shame as they were a major player here.