I am stringing 2 Bulb florescent lighting down the length of my shelf layout . I purchased GE T12 Daylight High color rendering (very cool bluish white light) 40 W 2,050 Lumens. Is there a better color rendering or perhaps as in the picture, a second row with a different type to mix hues ( perhaps a yellow bulb with the blue bulb as in picture )
I plan to photograph so a natural color is important. I could also string white LEDs . I intend to string Blue LED for moon light running Thanks ! Keep Striving. 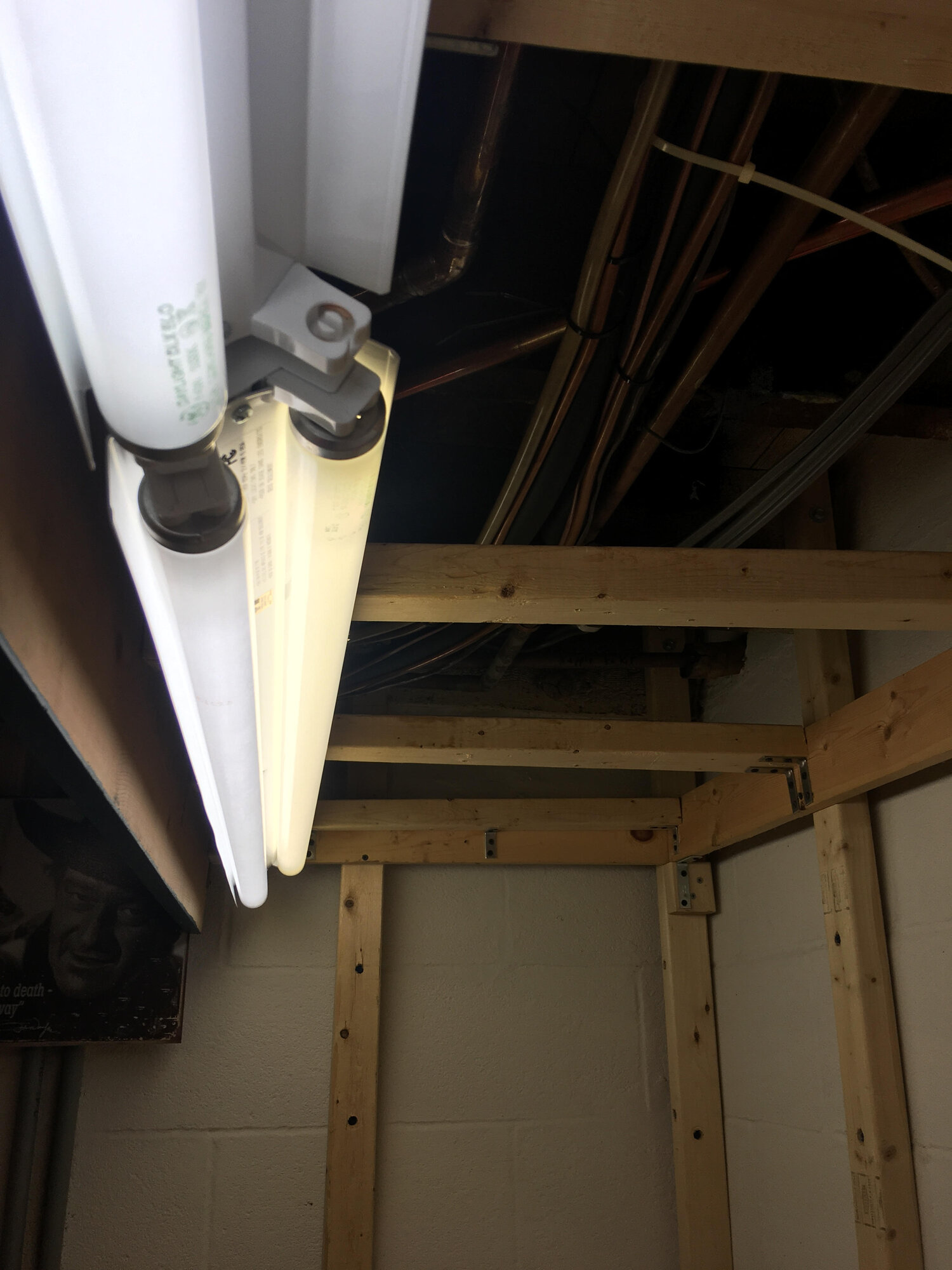 I've replaced all my fluorescents with LEDs. I used full spectrum 5k bulbs. It takes a little while to get used to them, but now they appear (to me) to be pure white. For photography, I set the color balance in the camera (Nikon) to 5200. The pictures come out just as I would expect.
N

I wouldn't use blue LED's, as they can be damaging to eyes.

I installed the four foot LED lights from Costco. They look like fluorescents but are around 4500K and run much cooler.

This might be a good idea, but it is not the whole story.

First of all, a certain amount of blue light is beneficial and is needed for good health.

We are already exposed to very large amounts of blue light. The Sun is by far the largest contributor. Others include fluorescent tubes and CFLs, computer monitors, smart phones, tablet screens, flat screen LED TVs, and LED lights.

Someone smarter than me could probably calculate how much the use of blue LEDs in the train room would add to the exposure we receive from all these other sources. Perhaps cutting down on screen time or watching less television would make sense and allow us to use blue light for our trains without worry.

LED light emission is in very discrete spectra , Thats why looking into just a plain led with no diffuser can hurt even at milliwatt power levels , its like looking into a laser The light is extremely pure.

Most led white light is produced by converting the light from a blue led into white by the coating on the inside of the led (very similar to florescent / and incandescent bulbs) .

The problem with led lighting is poor homogeneity . its spectra has gaps in it , the cheaper the led the more and bigger the gaps . So color temperature doesn't mean that much, because its an average.

The best lighting ...incandescent... its has the most homogeneous spectra .

Thats why you can shine a zillion candle power led flashlight on something and still not see anything , particularly colors like orange , red , brown ...
they tend to appear black .
R

I would replace those old Fluorecent fixtures with LED. If you use the shop light variety, they are fairly inexpensive and availalbe in 5k temp. They use a lot less power and you will save on your electric bill.

In my current layout room, I installed 2x2 flat panel LED but this time went with the 4K temp because I found the 5k tempt to washout the scenery a little too much, but they weren't dimmable. The flat panel lights can be dimmed.
R

I'm staying with cool white florescent lamps and fixtures mounted on the grid of the 2X2 lay ceiling. The heat produced by the ballast, while minor does help heat the train room. The normal temperature in the room is around 66 - 69 degrees after the room warms up.
Click to expand...

As many are aware, heat rises so the heat generated in the drop ceiling so I am skeptical the heat benefit would be significant. Plus you have the higher draw on electricity. Up to you.

My belief is LED lighting for residential use is still in its infancy and we'll see a lot of development in LED lighting as interest grows. I want to use LEDs for my home exterior night lighting due to LED lamp life being over 6 times the life of a average incandecent lamp
Click to expand...

There sure seems to be a lot of LED options for intererior and exteriror home use. My wife and I have replaced our kitchen ceiling light with LEDs and the front door and garage (both sides) with LED lights. The rest of the interior lights are being replaced over time.

"As many are aware, heat rises so the heat generated in the drop ceiling so I am skeptical the heat benefit would be significant. Plus you have the higher draw on electricity. Up to you." -riogrande5761

No future plans to change to LED's and I even have a stock of replacement lamps to use when the time comes since four foot fluorescent lamp production is being phase out and the lamps may get hard to obtain in the future.

One of the 12 story office buildings my company built and owned was constructed during the energy crisis in the 1970's. In order to get approval for construction from the State, the heat generated by the mechanical fluorescent ballasts provided some of heat gain in the calculations in determining energy use for heating and human comfort. This use of the ballasts for "heating" prevented the later wide spread retrofitting to increased energy efficient ballasts and lamps until changes were made to the heating system or building's glass curtain wall.

PS: This building is now a luxury hotel and restaurant and the curtain wall was replaced with the interior gutted and totally remodeled.
Last edited: Nov 3, 2020
T

I remember the energy crisis in the 70's. The gub'mint mandated the temperature in buildings inhabited by government contractors be no higher than IIRC 67 deg. F. The problem was, the windows were all sealed, and there was a plethora of electronic equipment that generated heat. In order to keep the temperature at or below 67 degrees...the air conditioning had to be turned on! Really saved on energy....NOT!
God Bless and Save the United States of America from all enemies, foreign and domestic!

Trailrider: So right you are about the windows being sealed. With this building we could use outside air for cooling during the winter if the need arose. This usually happen in the transition period between the heating and cooling season.

To compound matters, this building was heated and cooled by a Central Plant that required close to 700 feet of underground piping to carry the hot water and chilled water to the building.