Does any one know if the MRC Tech 6 Sound Controller 6.0 give the full availability of sounds for BLI?
I have purchased several BLI Paragon 2 steam locos and will be getting a Paragon 3. I bought the MDC 6 because it allows both my old DC to work and use my new BLI sound locos. Good transition system while I grow my layout. But I appears not to play all the sounds available on the BLI spec sheet. Very little instructions cam with the MRC controller. Thank You 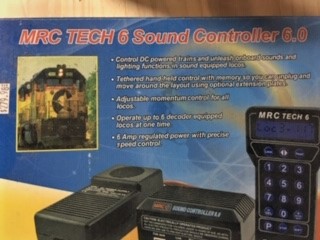 Staff member
Not having used a Tech 6, but as it is a DC controller and can run any dual DC/DCC decodered engine and have it produce the basic lights/sounds, it probably lacks the capability to access the DCC CV's (configuration variables) that control the extra sounds (functions) that the DCC side of the decoder has available. Any modern DCC/sound decoder is, as I mentioned dual purpose and will run on DC as well, but there is a proviso. As the sound system in the decoder requires more voltage to get it "going", it requires about 6-8 volts DC from the controller to start that up and the engine won't move till that happens. This makes them unsuitable for consisting (running together with) a normal DC only loco, which will (or should) start rolling at V1 or 2.

As you progress, we can advise you more fully on the differences between DC control and DCC control. The first thing to realise is that DC controls loco movement by varying voltage between 0 - 12, generally. DCC, on the other hand has power to the track at full voltage, all the time (usually around 14V) and control is achieved with digital signals, passed from controller to decoder, which interprets those signals to the appropriate function
T

I used the Tech 6 6.0amp system for awhile, as I, too, tun both older DC and newer DCC with sound. But I have no experience with the BLI steamers. I had two different Tech 6 6.0's, and both eventually developed problems with the rotary speed controllers. I finally went to a system using the NCE Power Cab for DCC, and an older DC power pack for DC. (The DC power pack has plenty of current capability for older Athearn Blue Box diesels running together, which most of the modern DC power packs can't handle without overheating!) As I don't run more than one train at a time on my 14' x 14' folded dogbone layout, this doesn't cause me any grief. I have the two systems connected to a DPDT selector switch on my main control panel. Thrown one way, the layout is connected to the DC pack. Thrown the other, to the NCE Power Cab with a booster. I would imagine that the NCE system can access a lot of the sounds on the BLI engines, but I can't say for certain. I know that I can get a lot of different sound settings for Soundtraxx Tsumani2 decoders for my kitbashed Mantua steam locos.

trailrider said:
I would imagine that the NCE system can access a lot of the sounds on the BLI engines, but I can't say for certain. I know that I can get a lot of different sound settings for Soundtraxx Tsumani2 decoders for my kitbashed Mantua steam locos.
Click to expand...

Currently there are 28 functions that can be accessed via the keypad on most if not all DCC Cabs and they're gradually getting filled up. SMS finger dexterity is going to required soon methinks. That will rule me out.
You must log in or register to reply here.
Share:
Facebook Twitter Reddit Pinterest Tumblr WhatsApp Email Link