Got my DT602D throttle today. I'm pretty sure it's duplex. Even has the DT602D on the little tab at the top center.
Instructions say to plug it into a loconet plug, I guess with or without batteries. Doesn't actually state that.
I put the three AA batteries into the back. Have to look real close for the + sign because it's printed real small and real close to the metal connectors.
I plugged it into a UP5 where I usually plug any throttle to marry up to my network. The screen starts flashing white to black, about three times per second. Waited for about 15 seconds, maybe it isn't supposed to do that. I unplug it and the screen goes black. No nothing. Buttons do nothing. Plug it back into the UP5. Screen starts flashing white to black to white to black.
OK, maybe my loconet isn't right. I plug the throttle into an available booster and the screen boots up. OKaaaaaayyyyyyyyy. I dial up a loco and run the train while its still plugged into the booster. Things are going good, crawl, walk, run kind of approach. I unplug the throttle (still has fresh new batteries in it) screen goes black, no control of train. I plug it back into the booster and the screen boots up and I can control my loco. Maybe the batteries are bad, so I pick out three more from the box of new batteries. Same thing, no throttle activity.
Maybe my Duplex net is down. I grab an available DT402D throttle, put a battery in it, screen comes up, I dial up a loco and all is good.
I don't know. I read through the manual several time and it seems pretty straight forward unless there is some kind of presumed knowledge that I just don't have. Trouble shooting is about half a page of information but is pretty simple stuff.

I contacted Digitrax and described the problem.
They responded with a short message to send it in for repairs under warranty.

I bought this throttle through Yankee Dabbler. A few bucks less than anybody else was selling em for.
A few months ago, I bought some DS64s from Yankee Dabbler as well. One of them had to go back to Digitrax for repairs.
Getting kinda expensive to buy the item then pay for shipping to have it repaired plus the several weeks or months before I get it back.
Maybe I should pass up the lower than usual prices of YD and buy elsewhere.

Sorry to hear about you having problems with your new DT602. My guess since the throttle work when plugged into the booster, there must be a problem working with the the UP5. Is the connection with the cable into the UP5 okay?

I would join the Digitrax Users group and post your problem before sending back to Digitrax. It maybe be a simple problem that can be cured.

The Digitrax-Users Group is for end users of Digitrax Digital Command Control (DCC) systems for model railroads. Friends Helping Friends. That is our fundamental guideline. The group is for discussions, providing help and assistance on the use and installation of Digitrax products and other DCC...

On the Digitrax Users Forum there's a lot of discussion regarding the batteries used in DT602 and that they should be 1.5 volt since some AAA are less than 1.5 volts. Also, there some issues about the battery holders and the contacts not being installed correctly.

This doesn't explain why it work when plugged into the booster.

Post your question on the site or go to their Chat.

I guess I should have stated that I tried all my UP5s, I think there are at least 16 of them around the layout. The throttle didn't work on any of them but they all work with all my other throttles, about 10 of them..
I'm sure it's the duplex as that is what I ordered and as I stated it has the DT602D label on it.
I have three Loconet Repeaters on the layout. The throttle did work in one of them but not the other two.
This is a pretty extensive layout that I put a lot of planning into. The diagram below shows all the components. 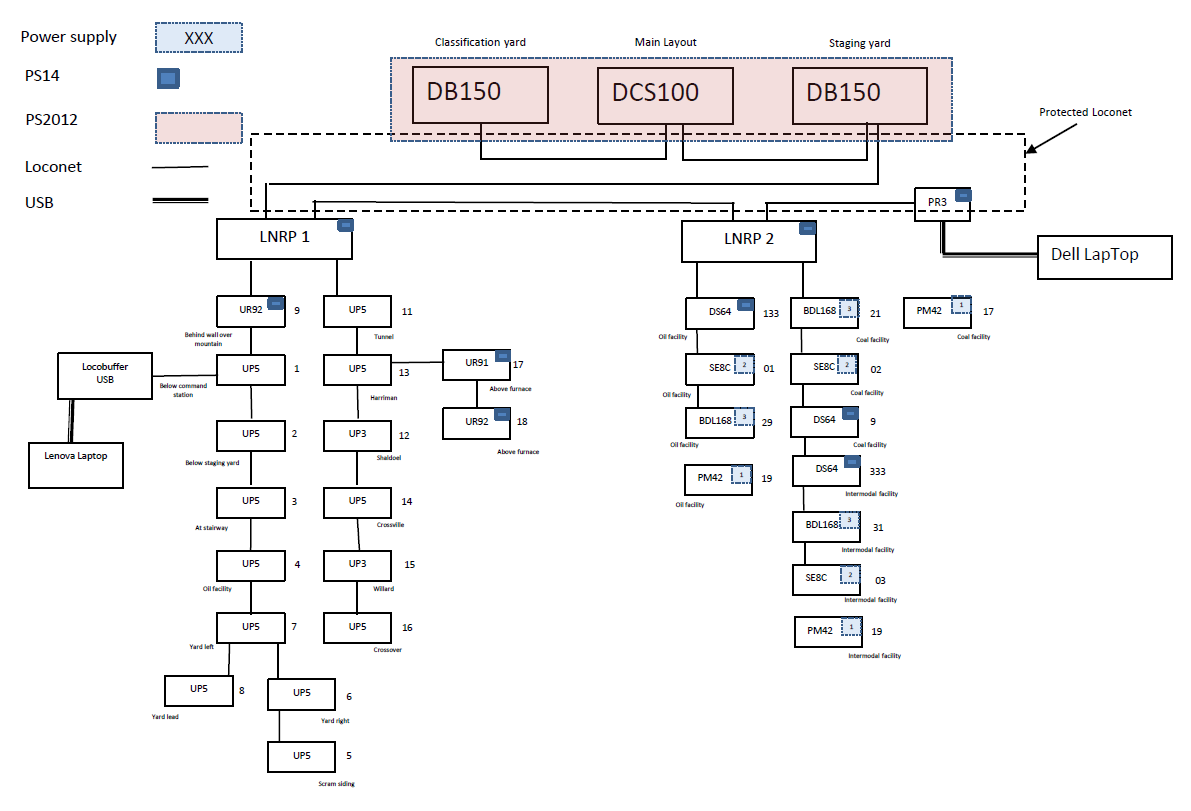 My understanding is that this product is relatively new? if it is , it could be just teething issues .
P

DT602Ds are equipped with Duplex Radio, using existing UR92’s for operation
You never mentioned anything about the UR92 (receiver) only a UP5 and it will work if it is plugged into the UP5 but you need
the UR92 if it is wireless.

Yep, forgot to mention that I have two UR92s in the system. You can see em in the schematic.
As much as I have been able to develop this system, troubleshoot and integrate with the Train Controller Silver software for signal control, I think I pretty well understand what is working and what isn't.
I'm quite sure its the DT602D.
GeeTee, I think you are spot on.
Anyway, the DT602D is on it's way back to Digitrax for a fixing.
Yeah, I put postage on the box, filled out the repair request, included the sales receipt and cushioned it.
G

D&J RailRoad said:
Yep, forgot to mention that I have two UR92s in the system. You can see em in the schematic.
As much as I have been able to develop this system, troubleshoot and integrate with the Train Controller Silver software for signal control, I think I pretty well understand what is working and what isn't.
I'm quite sure its the DT602D.
GeeTee, I think you are spot on.
Anyway, the DT602D is on it's way back to Digitrax for a fixing.
Yeah, I put postage on the box, filled out the repair request, included the sales receipt and cushioned it.
Click to expand...

One question , are comm lines from the repeater terminated into the characteristic impedance of the cable ?

There are no adjustable or configurable features of the repeaters.
The command stations are plugged into one set of loconet connectors on the LNRP and the output from the LNRP goes to the rest of the Digitrax components as illustrated in my schematic.

Ken, hope that Digitrax handles your problem to your satisfaction.

My DCC system suddenly failed just nights before I was having several modelers over to run trains. The DB150 just stopped working and no locomotives would respond to commands and the system was down for the count.

I couldn't spare the time to send the DB150 to Digitrax for repairs before the group came over so I purchased a second DB1150 which worked fine until I did some propramming. It too failed, or I though it failed. Again before the meeting.

To make a long story short, the problem wasn't with my DB150's but with my DT402 throttle going into idle mode. Once I woke up the throttle both DB150's worked fine.

Ken, it must of been a series of occurrences when I had my DCC problems. This was at least five years ago so I working from my memory and may be a bit foggy.

When I didn't have any control over the locomotives the DT 402 must went into idle mode. I must played around with the DT402 and hit the programming mode and the DB150 OFF LINE power indicator was lite and I never thought of hitting the PWR then Y/+ and then PWR to place the DT402 into Fn mode and back into operation which also controls the IDLE MODE as well as the PROGRAMMING MODE.

The display never indicated the throttle being in the Idle Mode by flashing TRK=IDLE and the lastest DT402 manual says to hit PWR then N/- followed by Y/+ and then hit the PWR to place the DT402 back into operation.

I may have an early version of the DT402.

Strange things can happen with DCC.

I since discovered that when I have a DCC problem it's usually a simple problem with a simple fix. Not to scare modelers away, DCC but problems are not real common, but do happen from time to time.

PS: I can use the extra DB150 when I do my layout expansion.

I'm still waiting for mine to show up even though I ordered it 3+ weeks ago. Apparently they are hot ticket item. Everyone is either back ordered or sold out. I hope Digitrax lets you know what happened to it once you get it back so we can all learn about and get over the "teething pains" as its been called.

I mailed my DT602D off to Digitrax on 27 July. I arrived back here today, all fixed, I think. Haven't tested it yet because I have some errands to run before the rain starts.
There is a note on the ticket though. Says "IPL'D battery issue", whatever that is.
G

D&J RailRoad said:
I mailed my DT602D off to Digitrax on 27 July. I arrived back here today, all fixed, I think. Haven't tested it yet because I have some errands to run before the rain starts.
There is a note on the ticket though. Says "IPL'D battery issue", whatever that is.
Click to expand...

Sounds like they uploaded a new firmware (software code in the chips) to fix the issue your having. Kind of like a BIOS update on computer boards.

Seems like Digitrax maybe rushed into production the DT602D throttles????

Invariably , any time you introduce a new product , there will be conditions you didn't test for and the user finds an issue. There's just too many permutations of installations ,initial conditions , and use, . This person is running obsolete hardware ,Someone else is running obsolete firmware and then there's that guy trying to run Windows 3.1 on a 286 . Even if you fix it for one user , you can create a problem for another .

Depending on the complexity of the product it can take years to shake all the bugs out and gets something thats stable .

Anytime your an early adopter , you should expect pain.