Cork vs. Foam vs. Homosote - Which is your preferred roadbed and why?

still in the planning phase on my layout but the cronstrution method has been decideded for the most part. The layout will be 1/8 underlayment foam and cork for the track right aways.

First of all I am lazy and cheap and have only one side of my office with a 2' by 11' area for my layout. The wall in back of this area is a built in ceiling height cherry wood book case and storage cabinets unit with a wet bar. So the wall is unusable. So what has this got to do with my roadbed method. Well it forced me to use some pieces of the dreaded fiber insulation board as the baseboard (UK term) mounted on folding TV tray tables and supported by loose 1X2's. A bit rube goldberg OK. But I also wanted to ballast the track. That involves liquids which would sink into the fiber board.

I cut out what pieces of sheet plastic to underlay track areas. A large part of the layout is a yard and station so just large pieces worked. Small holes were drilled and these underlay sheets were pinned to the fiber board with long track nails.

I then glued (white glue or sometimes liquid nails) and pinned the track (Atlas Code 100 flex and Peco turnouts) to the plastic road bed. I used pieces of the Woodland Scenics foam roadbed material between tracks to build up a scenic ground almost level with the top of the ties.

Now I could sprinkle the ballast and fix it with the usual diluted white glue with drop of detergent method. Nothing leaked into the fiber board.

Away from the yard and station, I cut the plastic underlay to fit the track with about 1/4- inch extra width from the end of the ties on both sides.

I used split halves N scale Woodland Scenics roadbed material to build up a shoulder almost to tie level and then ballasted. This provided a containment for the dilute ballast cement. I used less dilute glue on the solders for ballast to adhere when sprinkled.

This method has worked well and stayed in place for the last 4 years. Not as cheap as planned but the cost was spread out over time. One of these days I will build a proper baseboard, cover it with thin plywood or foam and repeat the same track roadbed method.

How does that Polystyrene work for going around corners? Does it bend at all like cork or foam, or do you have to make the relief cuts like homosote?
B

beiland said:
I probably should have gone to look that up , but thanks for doing it for me.

It looks like they make no claims for its 'insulation' capabilities, so likely I would not chose this for my shed siding application.
http://www.homasote.com/faq.aspx

But back to the roadbed application, the claim would be that I might attach the track to this material and experience much less problems with expansion and contraction in a non-climate controlled train room such as an outdoor shed or garage room in Florida,...is that correct?
Click to expand...

Found this link this morning, Properties & History of Fiberboard,.....lots of links as well
http://inspectapedia.com/structure/Fiberboard_Sheathing.php

I think I will be most tempted to go with more modern materials. The homasote sounds 'old school' and messy/dusty to work with,...plus expensive even if it can be found in the south.

And BTW, I think I've found some interesting material for making track roadbed,.... inside those panels they make for dividing up office spaces (cubicles).
B

...from another subject thread....


jdetray said:
Here are a couple of illustrations regarding the use of cork roadbed.

As it comes from the manufacturer, the cork is partially split down the middle on an angle (Step 1). You can finish cutting it apart until you end up with two halves as shown in Step 2. You then re-orient the cork as shown in Step 3 before gluing down first one half and then the other half. The final configuration is shown in Step 4, where the profile of the cork creates a sloping edge on either side of the track, which helps to form the proper profile for the ballast you will add later. 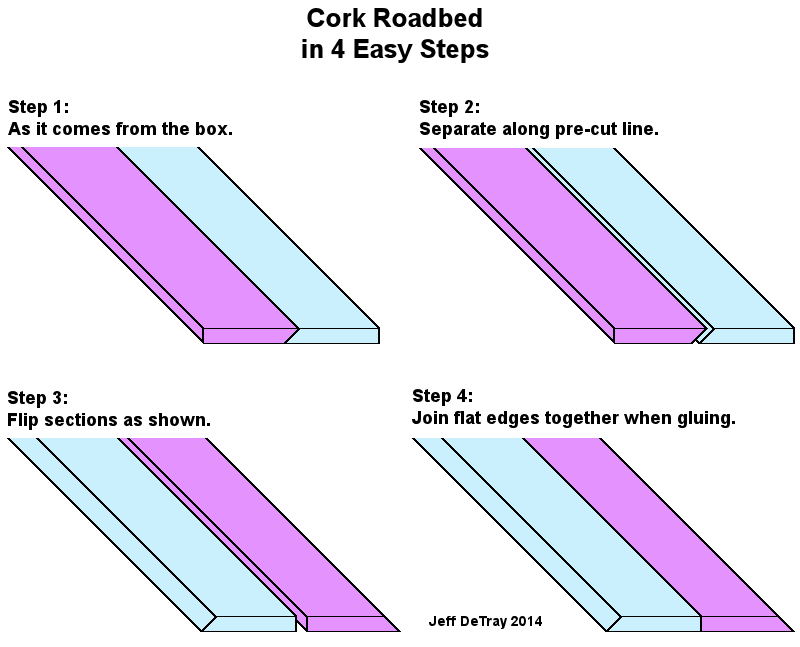 In the photo below, you can see how half of the cork roadbed is glued down and the glue allowed to cure before the second half is glued down. By gluing down only half of the cork at a time, it is easy to follow the curves of your track plan by positioning the flat edge of the cork against the center line of the track, as Iron Horseman describes above.

I use inexpensive latex caulk both for gluing cork to foam and for gluing track to cork. 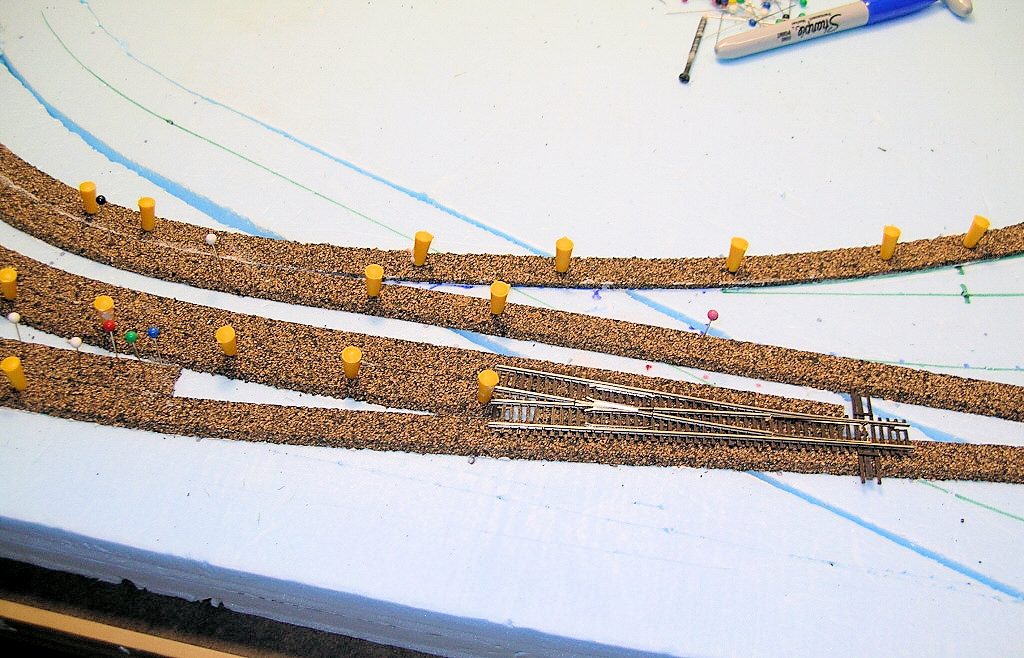 Iron Horseman said:
Do you mean a big sheet of foam over the whole thing or do you mean foam roadbed like Woodland Scenics? http://www.amazon.com/Woodland-Scen...s=woodland+scenics+roadbed&pebp=1419047103089

If you mean the large sheets of foam, I use it often. But always with roadbed. 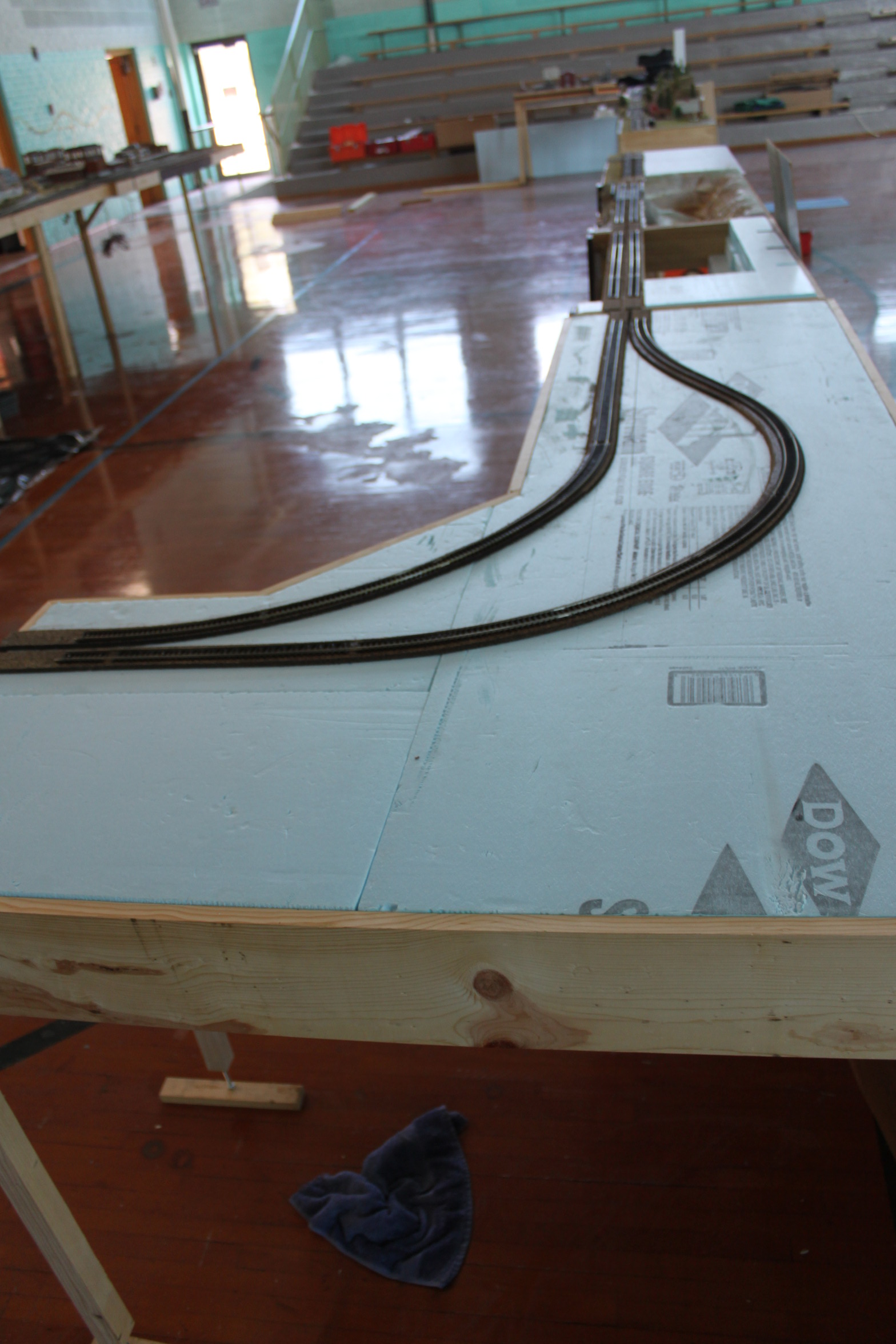 beiland said:
Just for clarification here, you are talking about using the 'plain insulating sheathing' (foam sheeting) as you would homasote,....in both a sheet form as in a flat area rail yard, etc, and in a strip form as roadbed in other isolated wandering mainlines ?

And since you would NOT be utilizing this foam board as the primary subroadbed, I would assume it would not be necessary to use the larger thicknesses?
Click to expand...

No, Insulated sheathing, AKA "Brownboard", "Blackboard", is a wood & cellulose product. There is NO foam in it at all. I do support it w/plywood. It's a little harder than Homasote, but does hold spikes extremely well. I've had well over 1/2 the layout in place for over 10years, and none of the spikes have loosened or pulled even a little.

beiland said:
Is there a specific type of cork you have utilized, or have you had some experiences with several different types??
Brian
Click to expand...

Sorry that I missed this question when you first asked. I use the cork roadbed from Midwest Products. It really appears to be a mix of cork and ground rubber, but it works nonetheless.
Willie
You must log in or register to reply here.
Share:
Facebook Twitter Reddit Pinterest Tumblr WhatsApp Email Link