While I have been in model railroading for years I have not had a personal railroad for over 6 years now. I do help with the scenery on the Railroad Museum model railroad in Minot ND (N scale). I have always in the past modeled in N scale, so this is new to me as I move to HO.

I have planned a modest two level self layout and am looking for input from you as to possible improvements. It will be loosely based on the Copper Range railroad of the Upper Peninsula in Michigan.

The lower level is a straightened out version of Byron Henderson's version of Linn Westcott's switchman's nightmare. The upper level right hand side is a rendition of Chuck Yungkurth's Gum Stump & Snowshoe. The upper left center runaround is set for a Loads-in - empties out operations with a smelter on the left side and a copper mine on the right side.

I will be using a train elevator to get the train from one level to the other.

The layout will be set in the 1920's and will have two locomotives. An 0-6-0 for the lower level yard which will be set along a dock area to move the copper ingots to market and a 2-8-0 to move the cars between the levels. Approximate train length with be about 4-6 cars.

Looking forward to input. The build is a couple of years off but I have started collecting what I need. 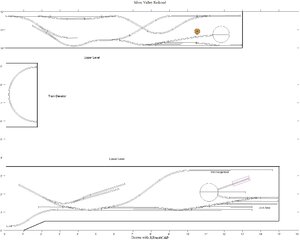 1) Can you not put the two end to end or as an L shape ? Unless the elevator is bulletproof and very smooth ops, you may wind up with trains on the floor.. Plus, for me anyway, I'd think the elevator would become a nuisance after a while..(2) Turntables pose a lot of difficulty installment-wise .. I'd only have one and merely run in reverse back to it, it being at the RR's home base... 1:1 scale short lines run/ran in reverse all the time after set outs and pickups, since they're commonly only 10-20 miles long...
Last edited by a moderator: May 15, 2020
i never heard of a train elevator . sounds like a good idea probably takes up less space than a helix.
MHinLA - To answer your questions, the reason for the two levels is this is my dream layout once we move to our final home and are retired. (I may end up with a much smaller layout) I wanted to get it designed now. I hope there will be enough room for me to put them in an L shape which is a great idea and will modify a version of the plan for that specific purpose.

If I eliminate one of the turntables and run in reverse on the return trip, then I could eliminate the second as well and save the cost and headache of installation could I not?

daves68 - The train elevator idea is from the Model Railroader book, Designing & Building Multi-Deck Model Railroads by Tony Koester. It would take up about 1/2 the space of a helix. I had planned to put it into the corner of the room.
thanks for the info i'll have to check it out
If I'm correct in what you were saying MHinLA this is what you were talking about. 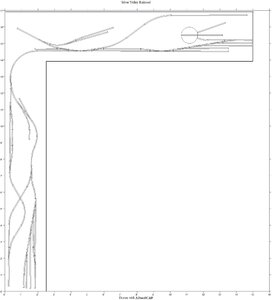 How about a turntable at one end and a wye at the other?
A scissor wye would even take less space, it’s a thought anyway.
I will look into the scissor Wye Rico. Thank You
I hope one of you Genesis will explain/draw a scissors "Y" to me? 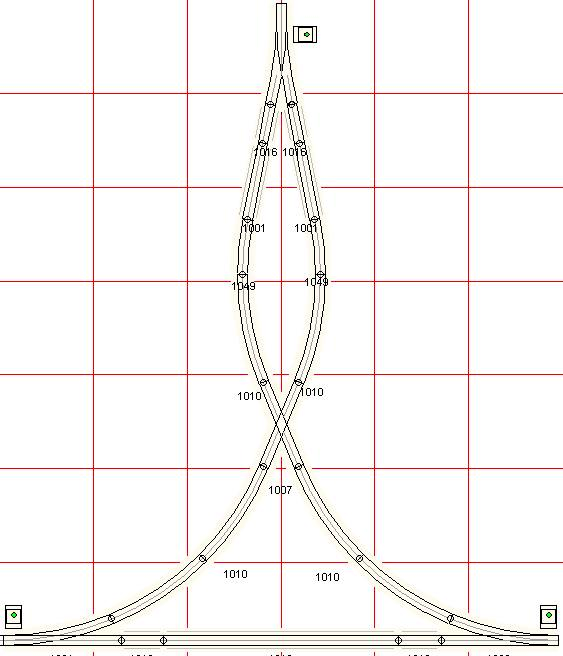 What purpose does a scissor Y do compared to a normal Y? Curious as I plan a Y at the end of my island.
On top of Jerome's question, that I would like to know as well, are there scissor Y's in real life?
Scissor Y's save space. They are very rare on the prototype, as diamonds, even the railroad kind, are expensive.

I thought I knew of one here, but it turns out that rather than build a diamond, they re-aligned the track. 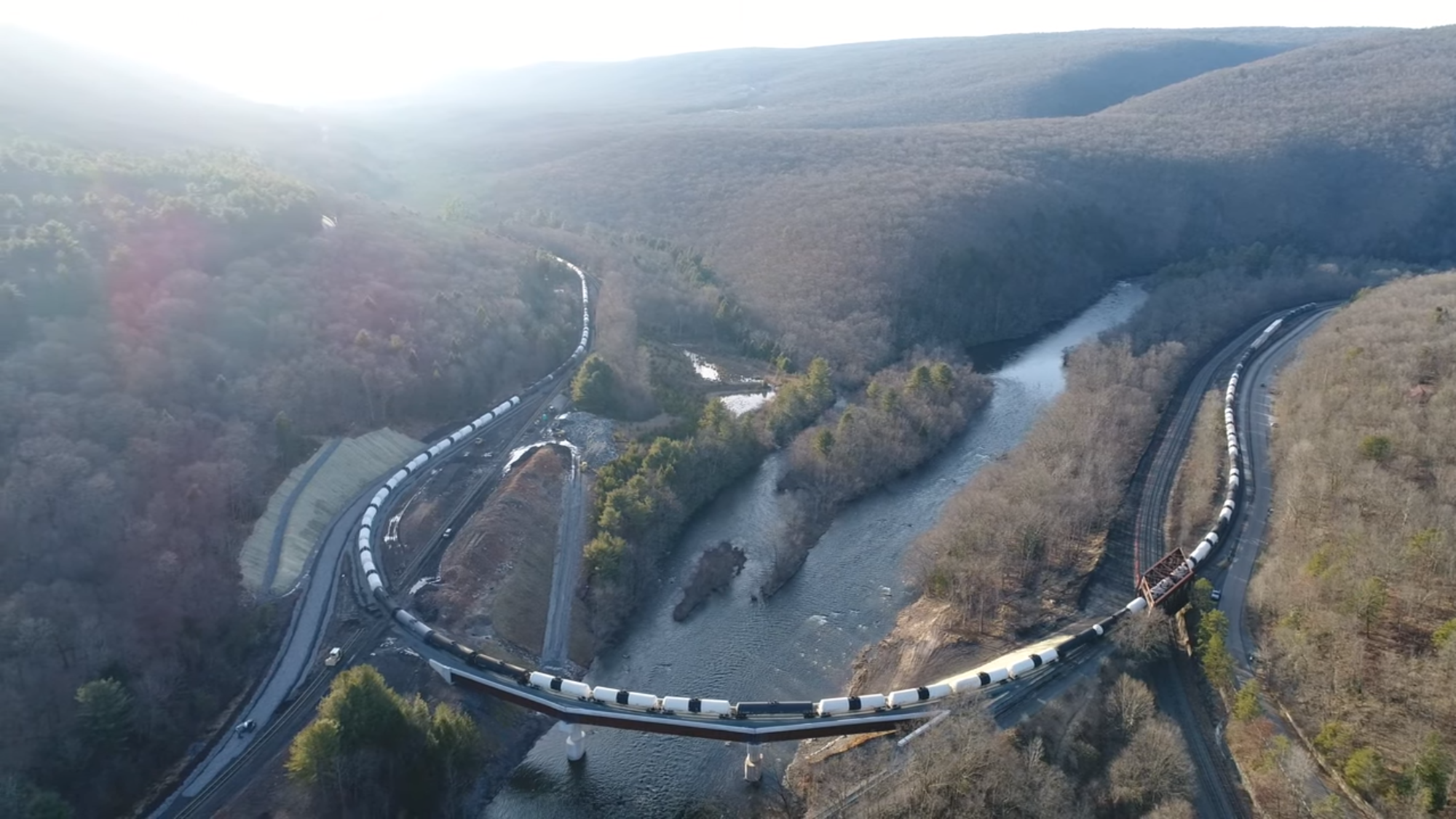 Tell me this doesn't look like a model railroad!
Oh I just love stirring things up then disappearing for awhile!
So how about this, try a space saving star wye! 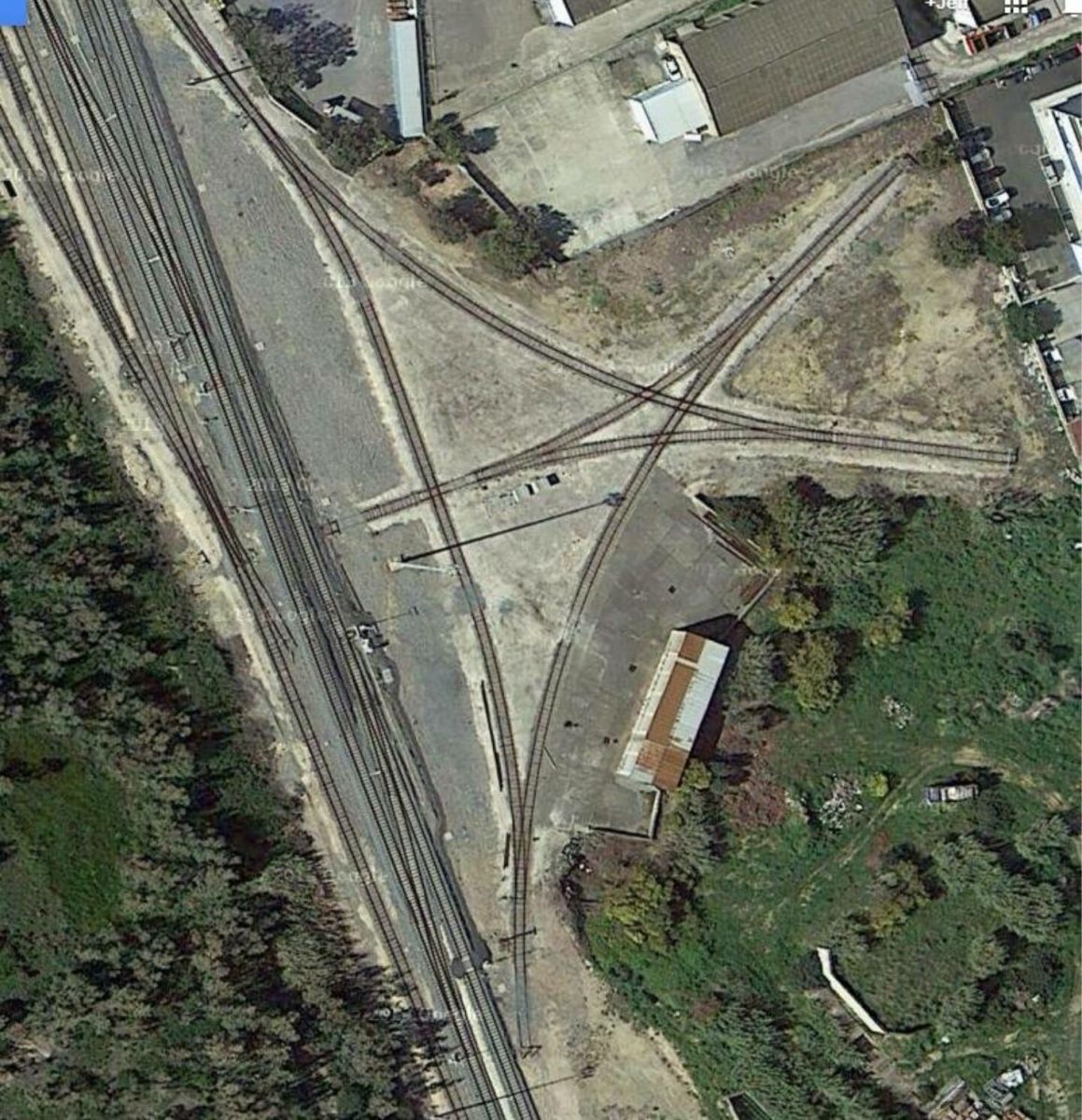 OK, now you are just messing with us!!! LOL
RICO - That is the one I was thinking about!
The elevator sounds like a good idea but will need close attention to detail during design and build. For example, if it does not raise/lower dead level, train will roll off the end (on occasion when moving a train without loco attached). Alignment pins of some sort will most likely need to be retractable.
So let's see a sketch!
You asked about a train elevator. I've been thinking about this and here's how I plan on tackling it.

First off I plan to build one that is a semi-circle of track not a straight one. That way the train moves forward from one level to the next. I plan on a 18" radius so a 40" x 20" 3/4 plywood should do the trick. The plan is to build a box frame out of 2x4 lumber with a 3/4" plywood base. I will then attach a camper stabilization jack to the base and secure my elevator plywood to the top of the stabilization jack. The jack is screw operated so I can then manually raise or lower the jack or attach a motor.

To keep the elevator level and smooth I plan on using 24" ball bearing drawer slides on each of the 4 corners of the elevator attached to the wood frame. This should allow the elevator to make a smooth stable ride when raising and lowering.

Just my thoughts on creating the elevator. If someone can improve this idea I would love to hear the ideas so when I get ready to build it I have a final idea for the build.

Here is a picture of a stabilization jack. It can extend up to 24" in height. 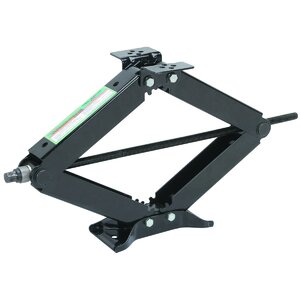