Have you seen the slot car race track of David Popp's from Model Railroader Magazine? It sceniced like a model railroad.

The only man-made object on my layout is the track itself.

My scenery is the High Desert where I live, with Mountains, Buttes, Boulders, Gravel, Cactus, and a Mountain Goat!

Sirfoldalot, I will need hundreds of dollars worth of track components, and I have a large Hobby Budget, so I don't worry about cost.
But thanks for your offer!

My original slot car track was built from scratch, and was free-standing and 30" above the floor. See my pictures.

I replaced it with new model railroad benchwork construction, which is now 12" higher (42") than the old slot car track.

This seems awful high for slot cars, but I'm 6'2", so I'll have no trouble viewing the entire layout from a standing position. I don't think I could comfortably dismantle it and build it lower, since I'm partially disabled from Arthritis in Back, Knee, and Shoulder.

The 2x4 framework is lag-bolted to the studs in the wall of the building, so that would make it more troublesome for me to convert to a lower bench.

What do you think...should I proceed and begin removing the 0-scale 2-Rail track?

Brakeman Hal said:
What do you think...should I proceed and begin removing the 0-scale 2-Rail track?
Click to expand...

If you still enjoy running it, then no. Forget that others don't seem interested, it's not their railroad.

The reason I'm frustrated and disappointed is because of the lack of O-Scale 2-Rail steam locomotives in my favorite wheel arrangement of 2-6-0, 2-6-2, and 2-8-0, in Western road names.

I know I'd have no trouble finding slot cars I'd like, like the ones I had in my first S.C. layout. (See pictures)

Brakeman Hal said:
Sirfoldalot, I will need hundreds of dollars worth of track components, and I have a large Hobby Budget, so I don't worry about cost.
But thanks for your offer!

Wasn't me that commented?

Gentlemen, I have agonized over my decision for the past several days and nights, and have concluded that my Railroad Layout is a Monument to the Railroad Heritage of my boyhood during the Wartime early 1940's, when Steam was King and my Dad was a Fireman on Pennsy Mikados and Consolidations, running mainline Coal and Steel shipments to eastern War Production Plants.

When Dad had occasional Yard Duty, he would take me with him and I would spend the day up in the cab of an 0-6-0 Switcher, while he and the Engineer would assemble another mainline shipment. While watching them work, I began to understand the function of the Valves, Levers, and Gauges, which was quite an eyeful for a 7-year-old West Virginia boy. I even got to step on the pedal that opened the firebox doors!

My layout is simple in operation, consisting of a single short-consist freight train "Calico Freight Lines" running on a single track that winds among the High Desert boulders and mountain buttes which represent the terrain where I live, but any Locomotive, whether Steam or Diesel, Mainline or Switcher, to me is a more noble sight than any Muscle Car or Sports Car zipping around like a mosquito!

Below is my Train House and several inside shots of my O-Scale 2-Rail Folded Dogbone Layout:

Thanks for listening...
Brakeman Hal, age 84 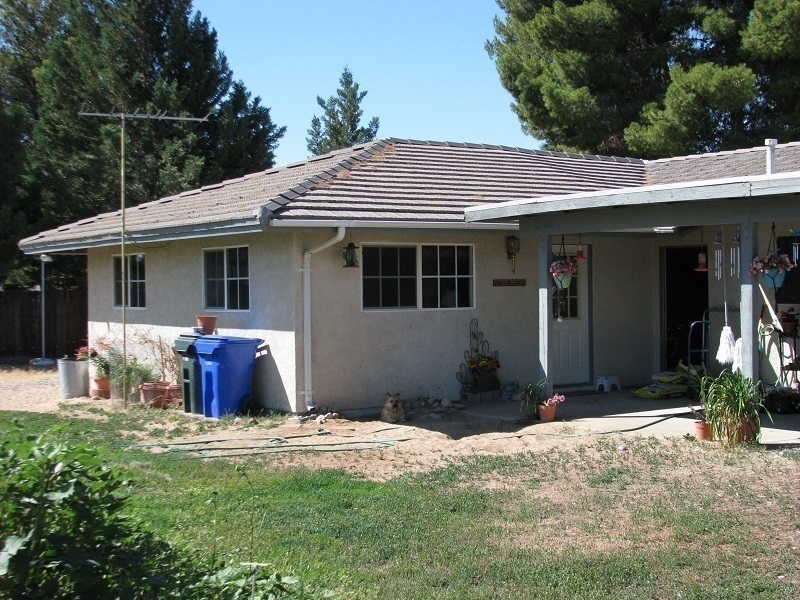 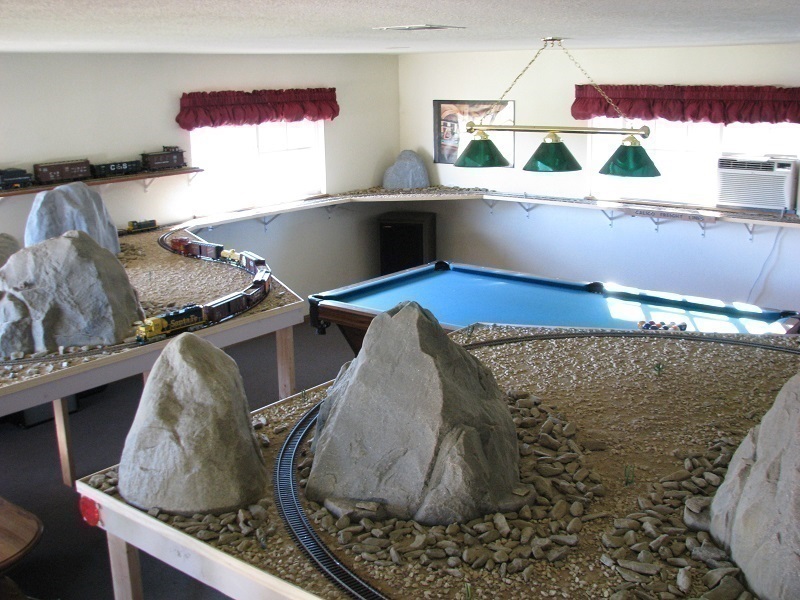 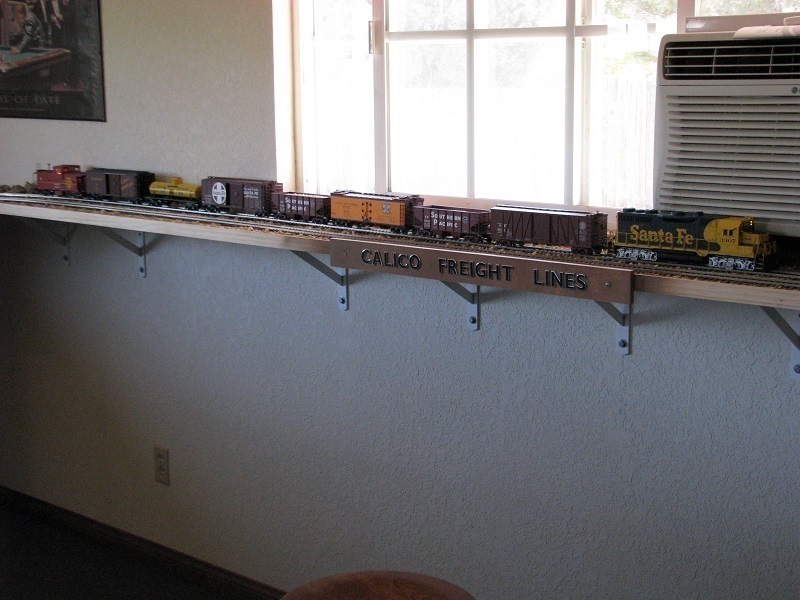 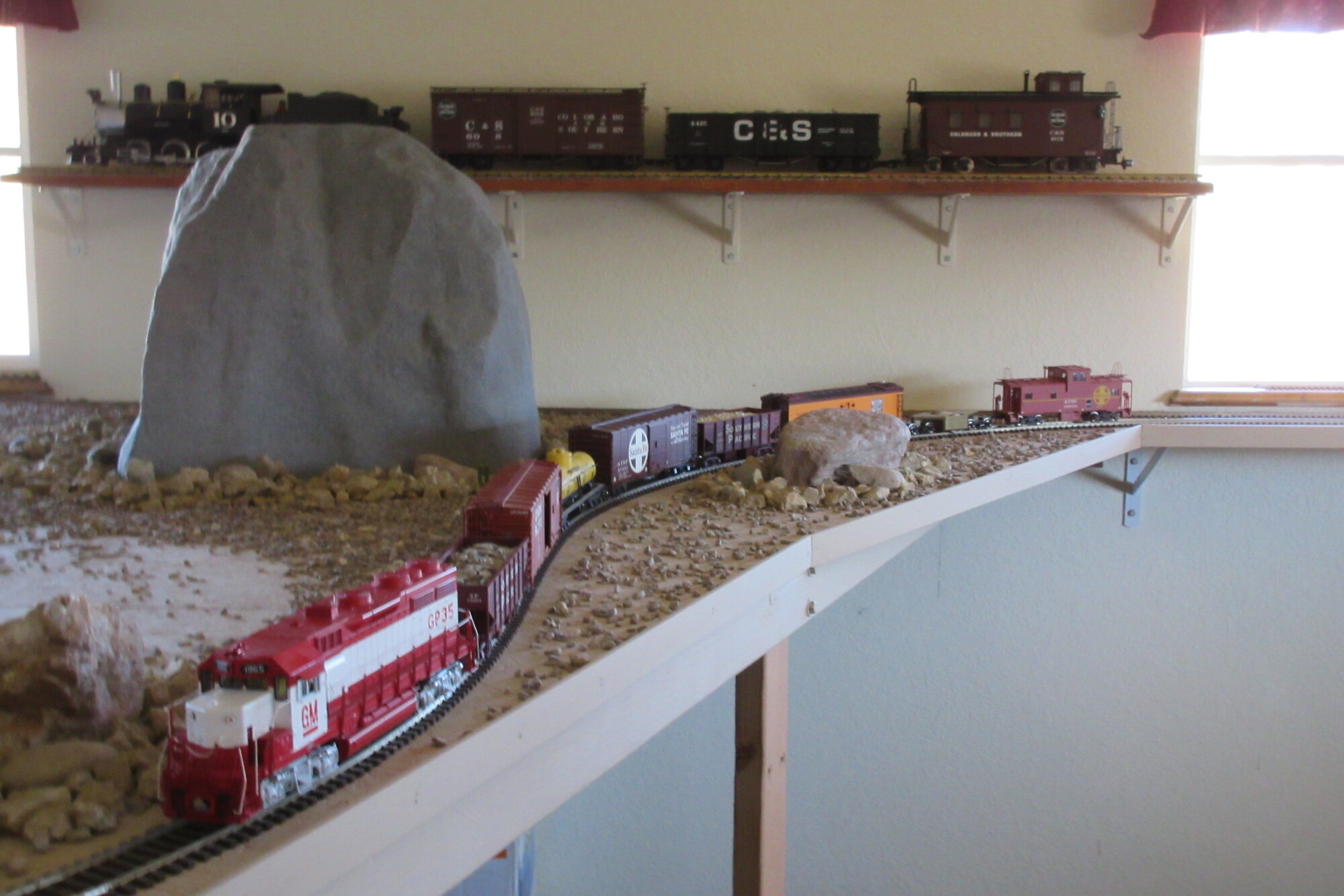 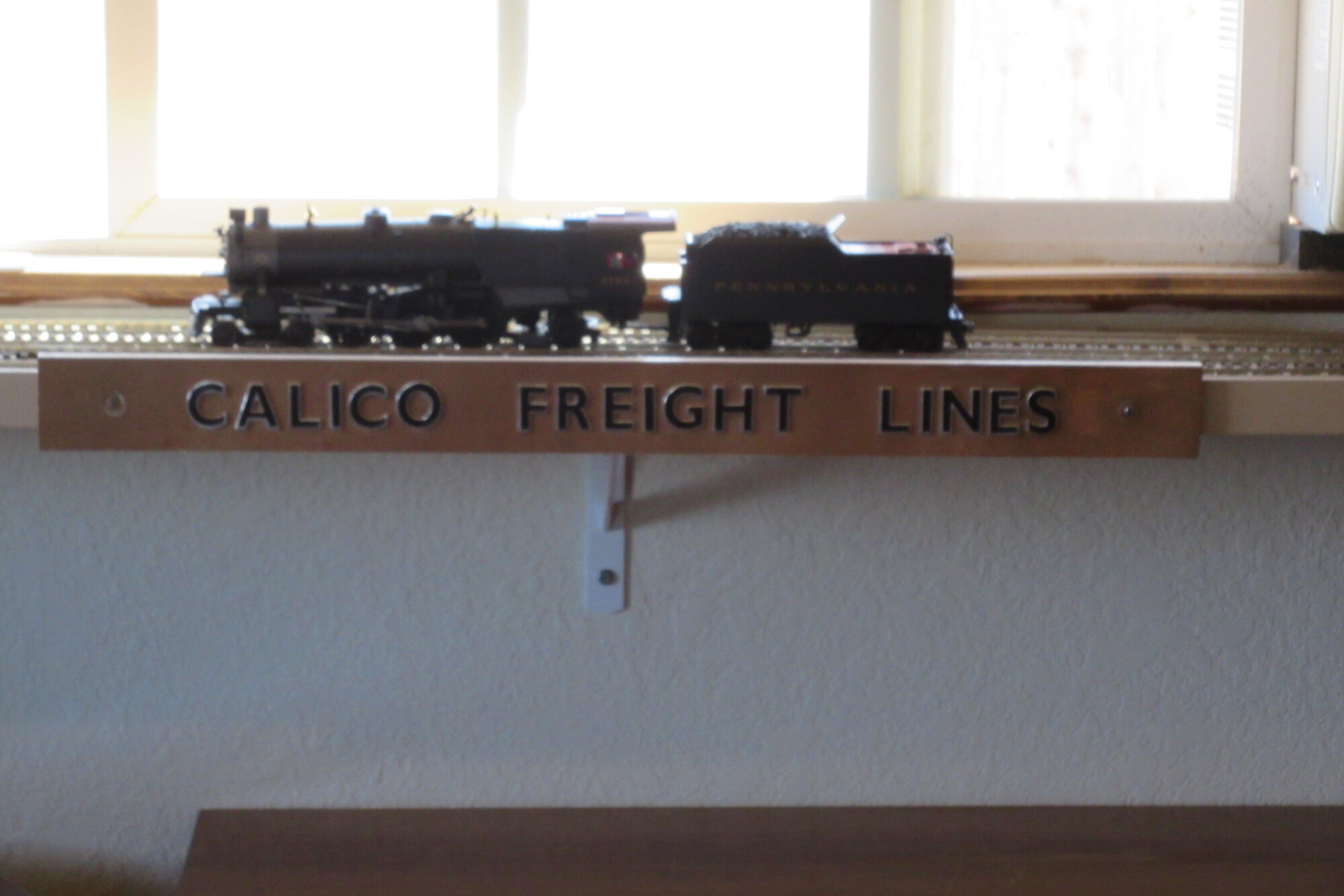 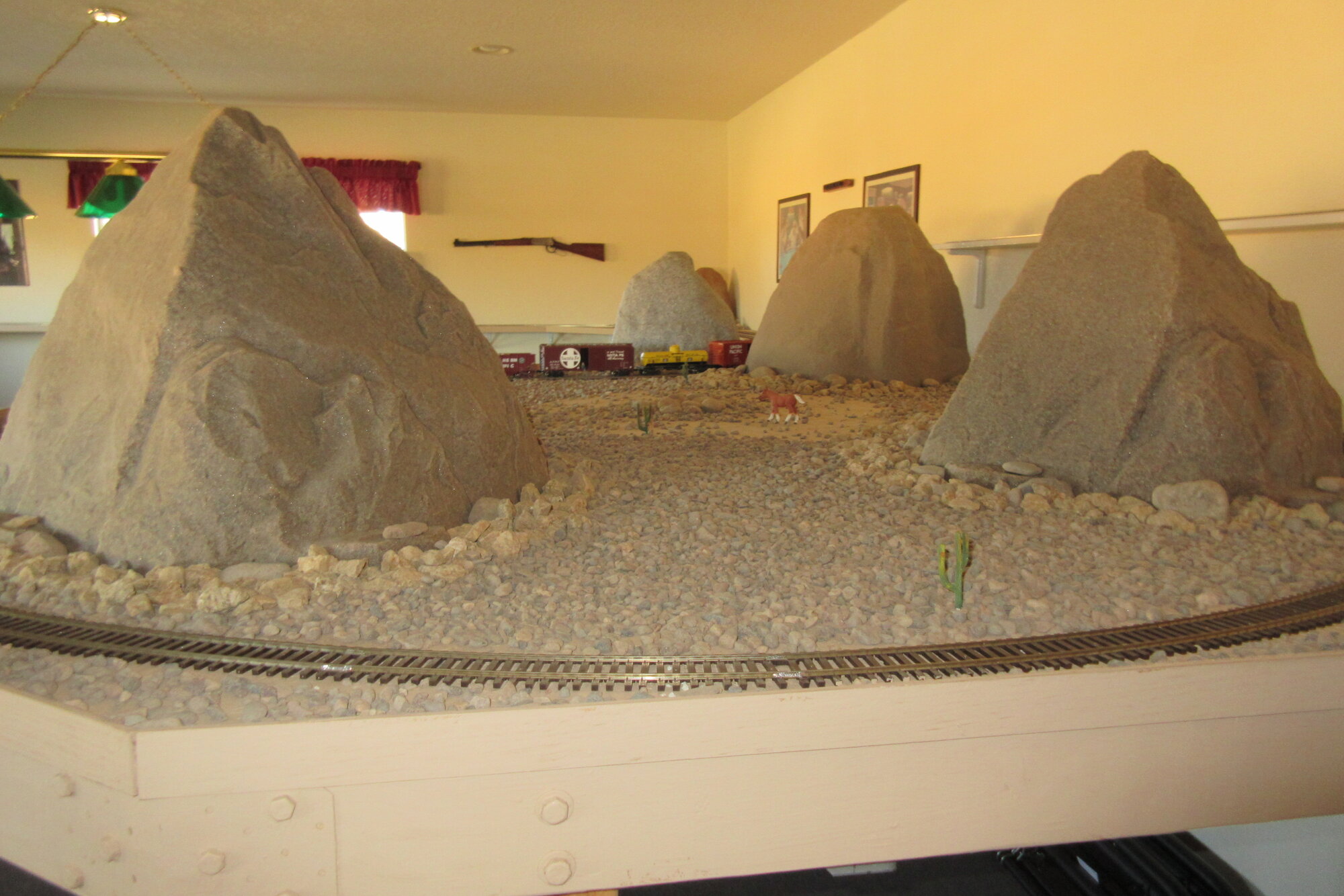 gentlemen, i have agonized over my deciion fo tepast evera
Click to expand...

Excellent News,
I still like my idea of moving some of that slot track over by your railroad! But mainly happy that you still have those trains !

Good News! Hopefully that decision put a smile on your face after agonizing.

Staff member
HAL - What is that 4-6-2 Pacific model???
Is that an addition to your RR?
Is that O-scale too?

Sorry for the indistinct photo, but that's my O-Scale 2-Rail MTH PRR Pacific loco, which I've had for a year or so.

It has a running problem; it makes a jerk forward and stalls, then makes a jerk and stalls. Repeatedly.
I keep it on a turnout siding just for display.

I have another newer O-Scale 2-Rail MTH Santa Fe GP-35 that does the same thing.

I also have an older O-Scale 2-Rail ATLAS Santa Fe GP-35 that does the same thing.

My only locomotive that runs correctly (shown below), is an MTH GM GP-35 that runs fine and displays all the sounds, both with a DCS controller and a DCC controller. The decoder is switchable between DCS and DCC. 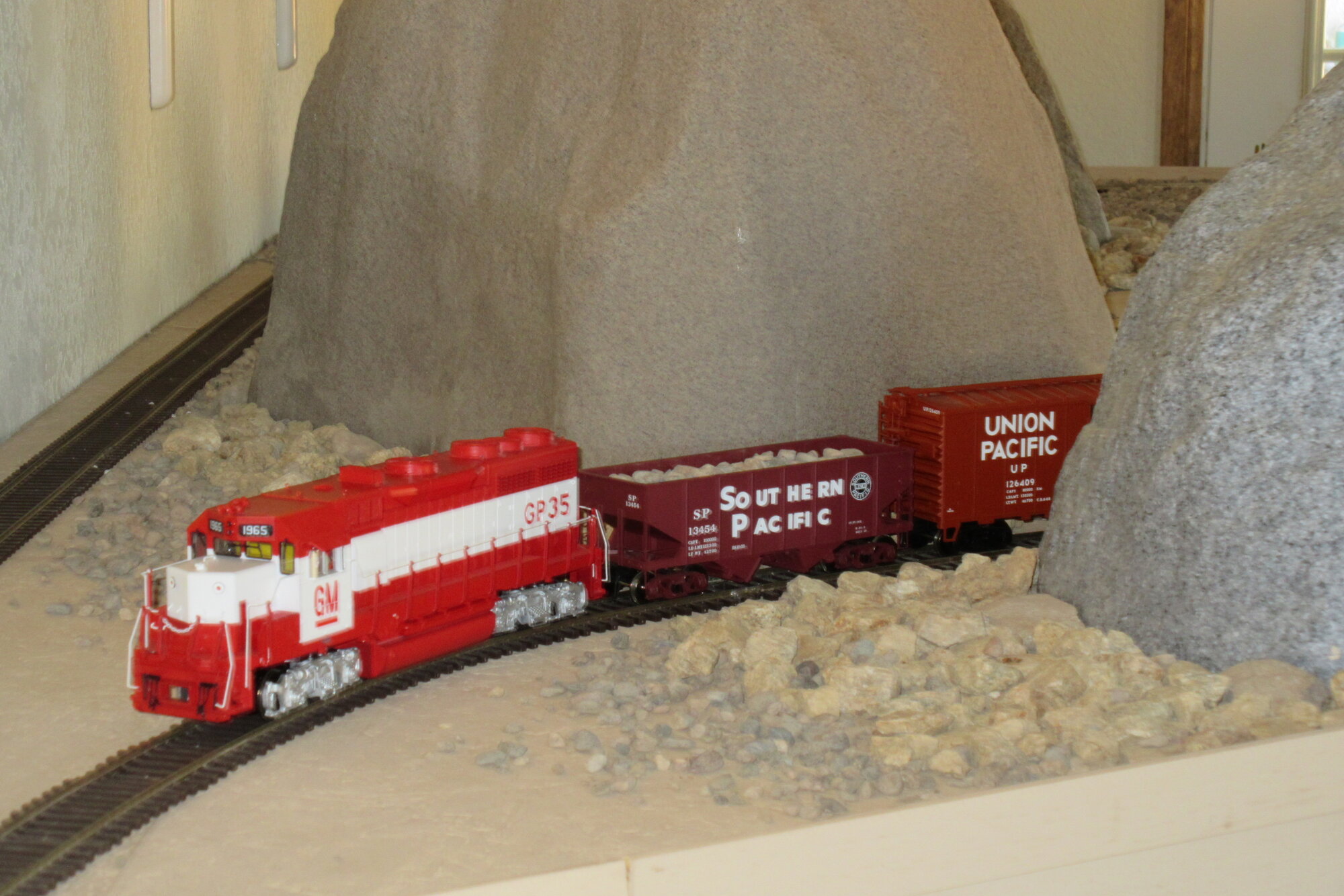 Are they doing it in the same spot?
I wish you were a little closer - surly there is someone around where you live that could take a look at them?

It isn't the track, because the hesitation problem occurs anywhere along the 130-foot course, and the GM loco doesn't have any such problem.

BigGRacing said:
Excellent News,
I still like my idea of moving some of that slot track over by your railroad! But mainly happy that you still have those trains !
Click to expand...

BigGRacing, it wouldn't look right to me having a slot car track in the same room as a model railroad layout.
Thanks for the tip, though...
Hal

Sirfoldalot said:
Are they doing it in the same spot?
I wish you were a little closer - surly there is someone around where you live that could take a look at them?
Click to expand...

There doesn't seem to be any train shop in the State that works on O-Scale 2-Rail equipment...it's as though it were poison!
Now that MTH has folded, I can't even send it to Mike!
Hal
You must log in or register to reply here.
Share:
Facebook Twitter Reddit Pinterest Tumblr WhatsApp Email Link