Some of the regulars at the coffee house posed for a group photo and I was wondering if you guys could help me come up with some names for them,going left to the right.
The woman behind the truck with the blond hair is the waitress...... 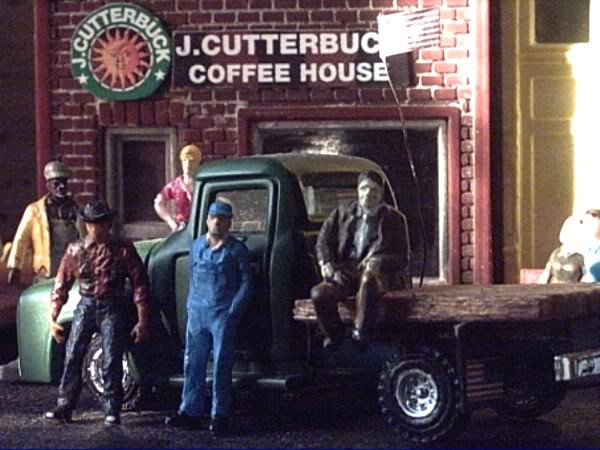 That one in the front looks familiar...

Actually Larry, I think her name's Flo - at least that's what those of us in the Coffee Shop thread call her!

That guy sitting on the flat bed looks like my old boss before I went out on my own. He was named, Max AKA Binky

Guy in in front of the truck looks like my old friend Willie . Nice picture OLD97

How about these?
Left to right:
Speedy, Tex, Flo, Max, & Lefty

Thanks for the kind words guys.
All the names thus far are great and I'm hoping to get a few more before wrapping this thread up............

Hey OldGettysk,
Would that be Willie from Goodyear???

Hey Mike, I just now noticed the similarity of your cafe's logo to Starbuck's!
R

Seeing the complexion of the guy sitting on the truck, I would say his name is either Lurch or Frank N. Stein. But, maybe it's NZRMac on the morning after the day before.
Nice photo of Flo, but you are hiding those (very)long legs of her's.
Last edited by a moderator: Aug 29, 2007

CSX_road_slug said:
Hey Mike, I just now noticed the similarity of your cafe's logo to Starbuck's!
Click to expand...

Yeah, someone else told me that once before. I made the sign from a box of instant coffee mix.

RexHea said:
Nice photo of Flo, but you are hiding those (very)long legs of her's.
Click to expand...

BINGO!!!! Flo has a rather large base on the bottom of her feet!!
She insisted on standing in the background!!!

Yeah Mike that is old Willie from Goodyear . Best sleeper in town !!
D

The guy in the cowboy hat is Slim. He fancies himself an old west gunfighter although he was born a few decades after the fact. He's been petitioning the manager of the coffee shop to put in a cuspidor and a hitchin' post out front. So far the manager has said "no". They pour coffee because if it was jagermeister things would get out of hand really fast.
Last edited by a moderator: Sep 9, 2007
You must log in or register to reply here.
Share:
Facebook Twitter Reddit Pinterest Tumblr WhatsApp Email Share Link