C40-8: The story of a custom paint project

It is easier to drop a wet spaghetti noodle thru a straw, than it is to replace the shell on the chassis of an Atlas C40-8. No, really - I spent close to an hour trying to force that *&&%@# shell back on over the front end. I was ready to do something stupid, when suddenly I felt something snap and the next thing I knew, it was sitting on there perfectly straight, go figure... (Luckily the decoder is already installed and working fine!)

I've been working on this model for the past 2 weeks. It originally looked like the diagram in this link: http://www.atlasrr.com/Images/HOLocomotives/hodash8/8-40C_CSX.gif
I figured I could do a little masking, throw on some Pollyscale CSX Blue & CSX Yellow with some Microscale decals, and be done with it. Wrong - turns out that the large 'csx' letters on the long hood are a scale foot lower on the Stealth paint scheme, so the blue stripe would've covered the bottoms of the letters. So to make a long story short, I ended up having to repaint the entire unit. I wasn't entirely pleased with the results, but hey - a bit of weathering covers a multitude of paint 'sins'!

Here is a proto shot of #7569, courtesy of Dean Heacoch's CSX Photo Archive:

I like this particular unit because (1) the paint is splotchy and uneven as on my model, and (2) the nose 'csx' letters are positioned below the center grabiron, instead of directly over it. I can't bring myself to paint the roof white though, I'm hoping that it wasn't delivered in that color.

Here is where I'm at so far. There are some imperfections that weren't obvious until I saw it in these direct-sunlight photos, it won't be too much trouble to correct those [I hope]... 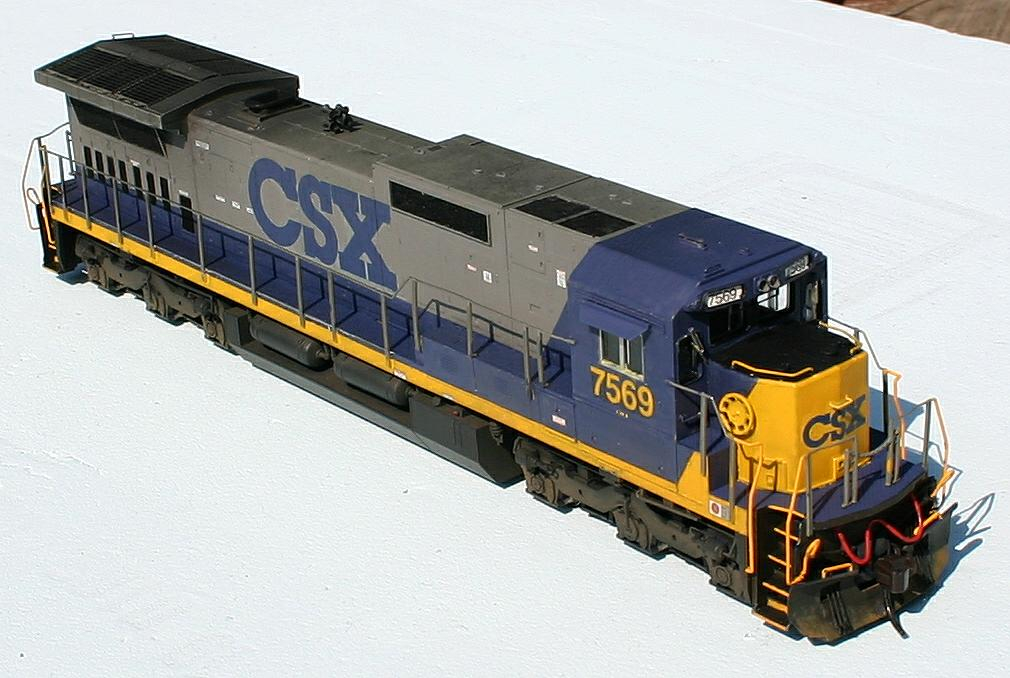 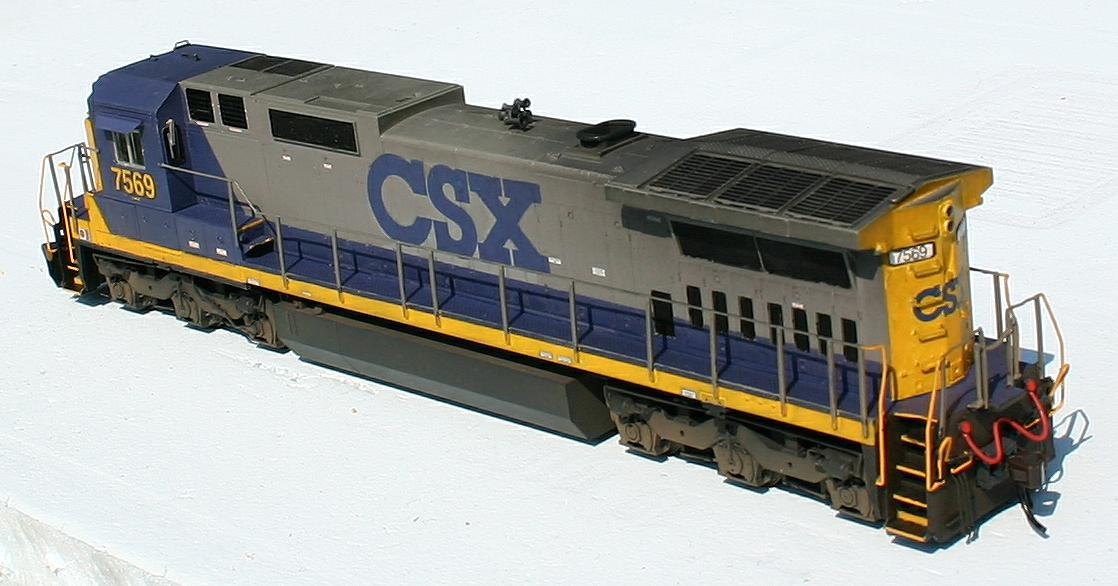 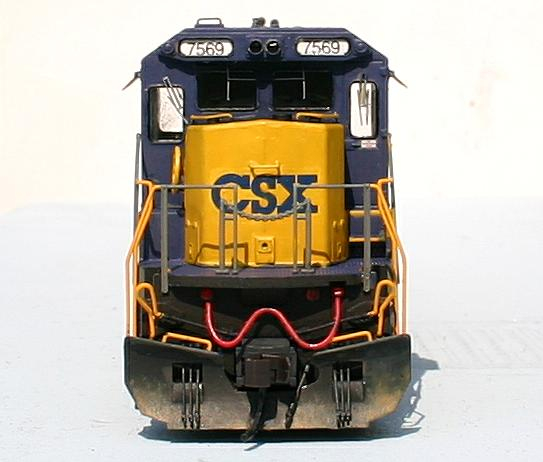 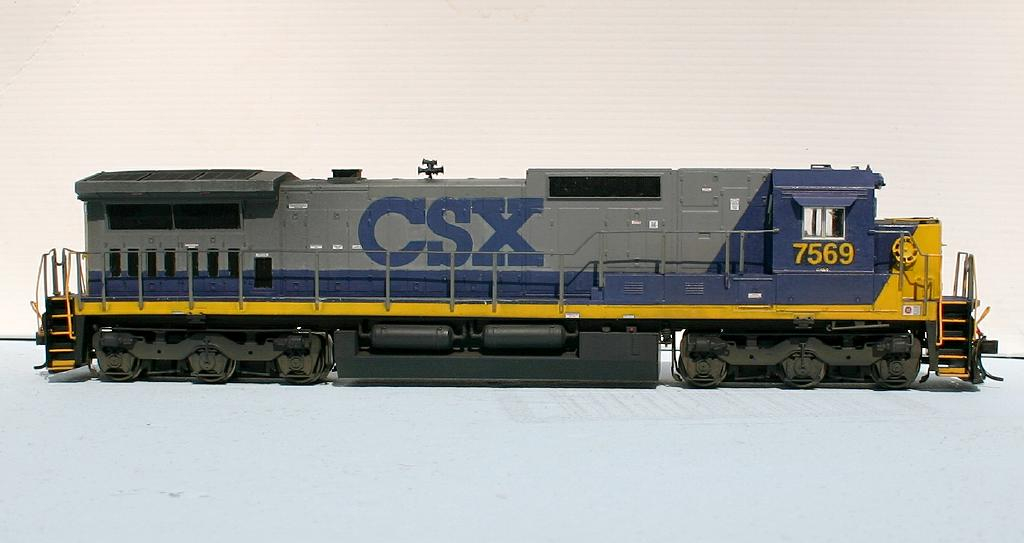 Ken, if I remember right, the white is a later add on to help keep the cab cool.

By the way, superb job!

jbaakko said:
Ken, if I remember right, the white is a later add on to help keep the cab cool.
Click to expand...

Yep, that's exactly what its for Josh. I just wish I had a photo of 7569 before it got the white-cab-roof treatment. I'd already printed and applied the number decals by the time I noticed that attribute.
T

Looks great, I actually saw the prototype about a month ago trailing unit on a grainer. That unit looks beautiful.

CSX didn't start painting the cab roof white until the YN3 (all blue) paint scheme, so at some point the roof was blue. The white was added in 2003 I think, if that helps you.

CP9302 said:
Nice work. CSX didn't start painting the cab roof white until the YN3 (all blue) paint scheme, so at some point the roof was blue. The white was added in 2003 I think, if that helps you.
Click to expand...

Thanx Fred, it does help! Since my target period is 1990-95, it's better if I avoid having any white roofs on my engines.


jbaakko said:
By the way, superb job!
Click to expand...

Thanx Josh - for that, and the confirmational pics in your later post.
Last edited by a moderator: Jun 17, 2007

Nice work, Ken. I'm not a CSX fan, but that unit is inspiring enough to make me one.

RCH said:
Nice work, Ken. I'm not a CSX fan, but that unit is inspiring enough to make me one.
Click to expand...

Thanks Ryan, I wasn't always a fan myself; but since it's the only game in town where I live, it just kinda grew on me!

No biggie, I'll just keep it out of my early-90's photos. As long as somebody doesn't show me evidence that 7569 never had a blue cab roof...in which case I'll have to renumber it.
Last edited by a moderator: Jun 18, 2007

No problem Rich, I got a good laugh out of it!

Wow! That's a fantastic looking model. You did a fine job on it!

From the looks of your pictures, I think we need to have the next ARG meet at your house Ken.

Rex, let's see if we can talk CJ into driving...
R

Darn Ken, when you're not a taxi driver you do some very good paint work. I had to look twice to make sure it was your topic.

Dean Heacock! How about that; he has to somehow be kin to me. No joke, how many Heacock's have you ever known? I wonder where his home is. EDIT: Just sent him an email.
Last edited by a moderator: Jun 21, 2007

Thanx Eric and Rex! If you guys want to 'ARG out' at my place I'd be happy to oblige, just give me a few days advance warning so I can clear a path to the trainroom...