sushob said:
Yet it looks better than some of the still-in-use railbed around here

I love reading all your history threads...even if they are 1000 miles away. Sure you don't want to hang out in PA for a while?

Thanks for reading the history threads Nate. As for the Lehigh rail bed, some of it can still easily be driven, some has been converted into roads, and some of it is so overgrown that it's tough to get thru at all. LGM and I wentback over there today, even though the weather is a bit wet. We did manage to find the remnants of two trestles. It looked to me like the L&N spent some $$$ to get to Lehigh. That's some rugged country out there.

Here's an 1890 map showing Compton and a stub track headed northwest, the direction of Lehigh... 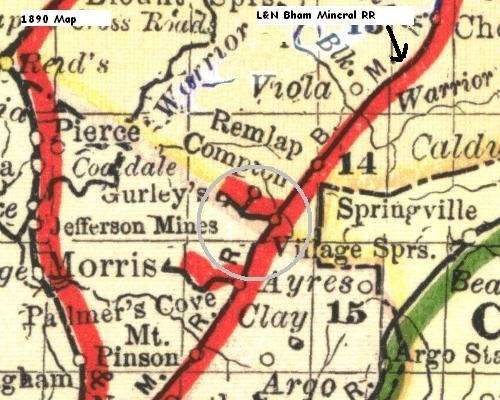 This map shows the break point/wye at Village Springs, the L&N's Birmingham Mineral RR and the location of the two trestles we visited today. 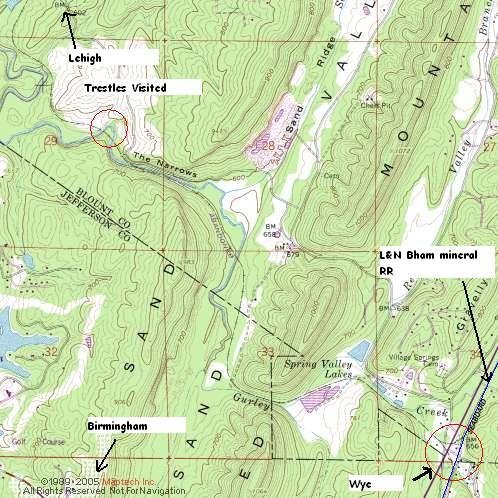 What's left of the first (east) trestle. Keep in mind, it's been at least five decades since the last coal train... 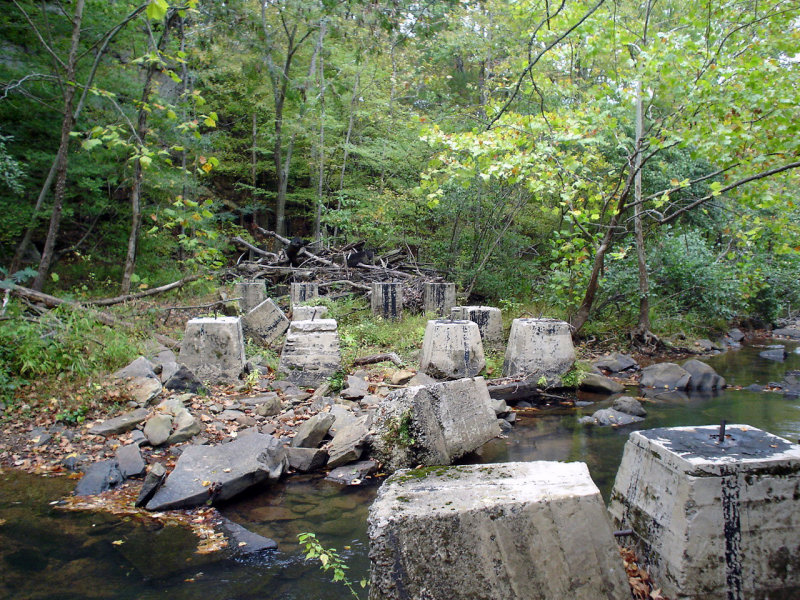 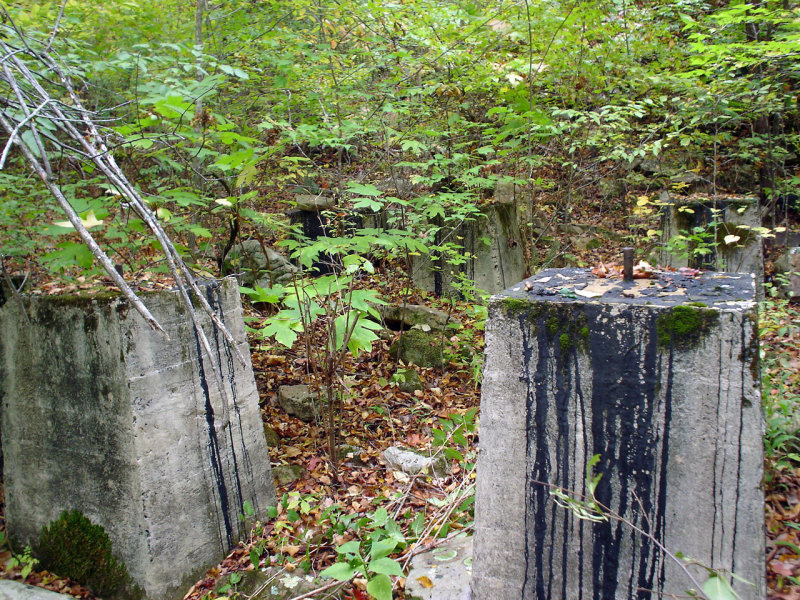 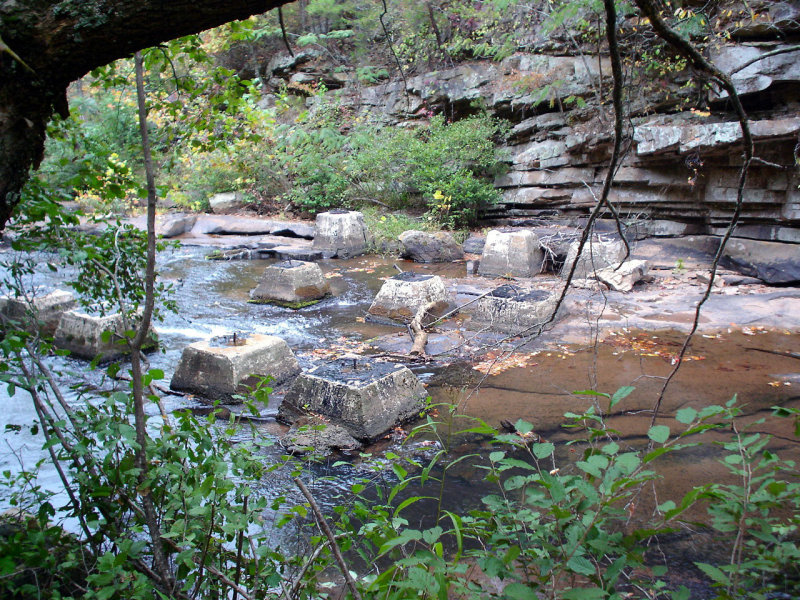 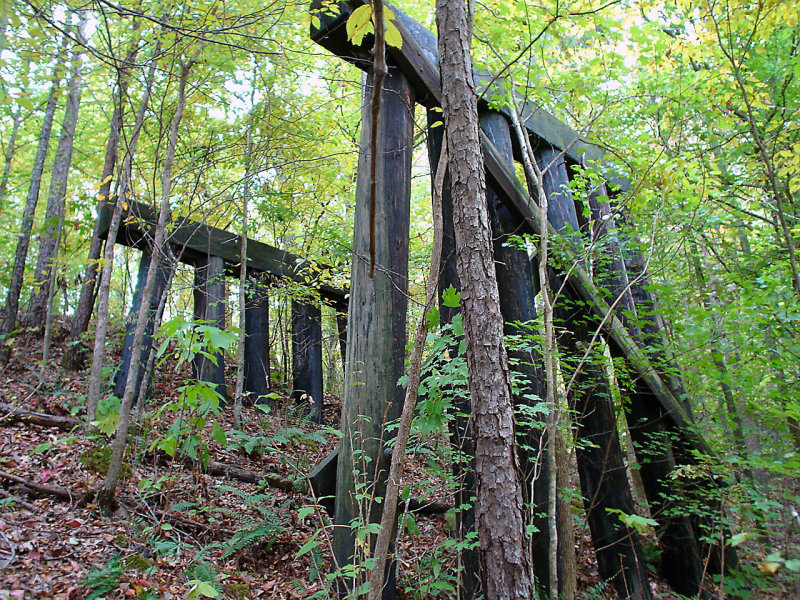 The two were only about 100 yards apart due to the bend in Gurley Creek. They just blasted a cut thru the hilltop between them. 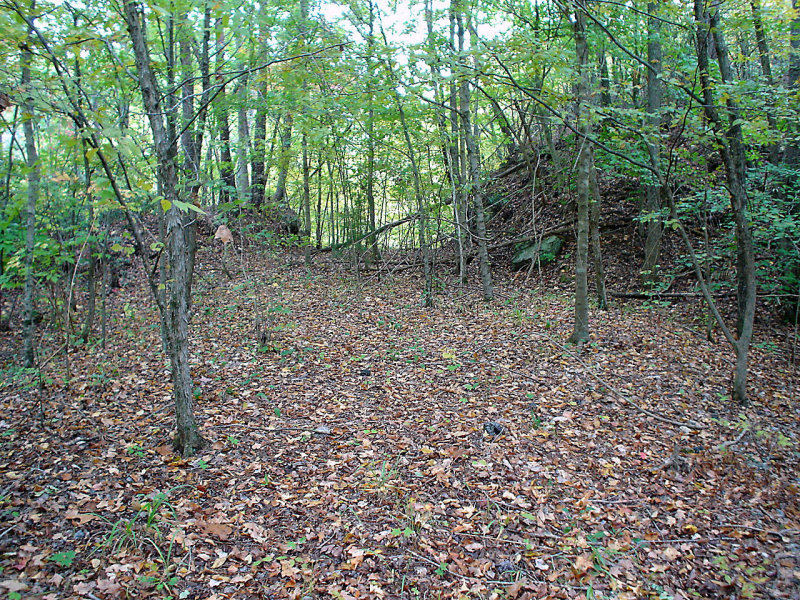 An interesting development took place this past week on the Lehigh research. I found a phone number for Mr Priestly Toulmin III, Ph.D. The Franklin's and I were both very excited to talk with him about his family history at Lehigh. Mr Franklin hadn't talked with him since the mid 50's, when he moved away from the Birmingham area.

Mr Toulmin was very kind to provide me with new pictures of the clay mining operation at Lehigh as well as interesting general background information. For this, I'm very appreciative. He believes the photos date from the 1920's or early 30's.

Here's a short excerpt taken from an email describing the shovels used in the stripping...

I remember three power shovels, two gasoline or diesel-powered, made by
Northwest, that ran on caterpillar tracks, and the "Big Shovel", I believe
made by Bucyrus Erie, that ran on rails. The tracks were laid in short
lengths for each of the four trucks, and had to be taken up from the rear
and relaid in the front quite frequently. It was powered by steam, most of
the fuel being coal dug up along the way in the pit.
In the audio files, Mr Franklin talks of the Bucyrus Erie shovel being sold for $5000, it's scrap value.

Note the steam shovel in the distance. 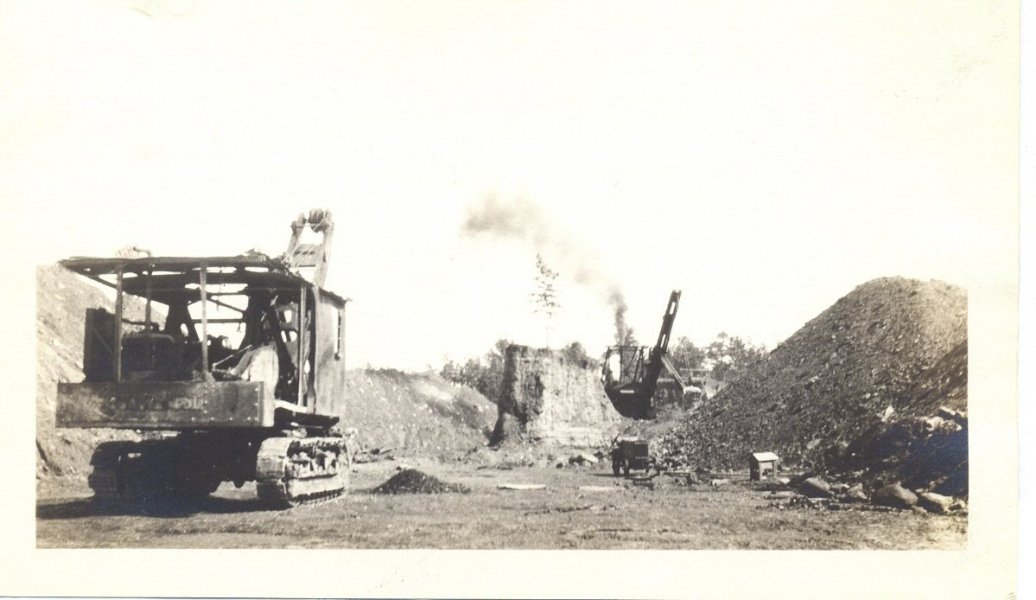 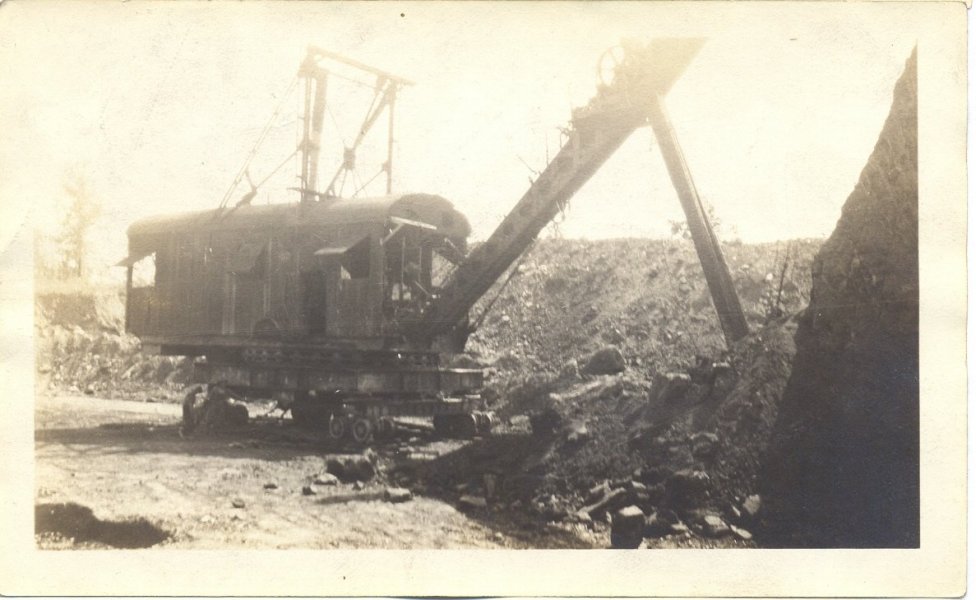 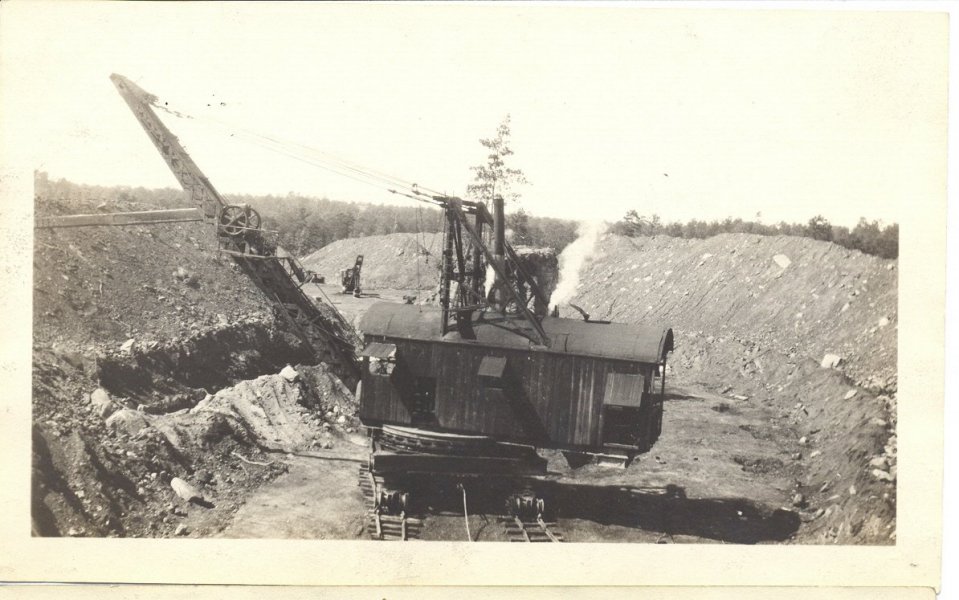 A cool shot of the mine railroad or tram as it was known at Lehigh. Obviously, the clay mining was fairly extensive. 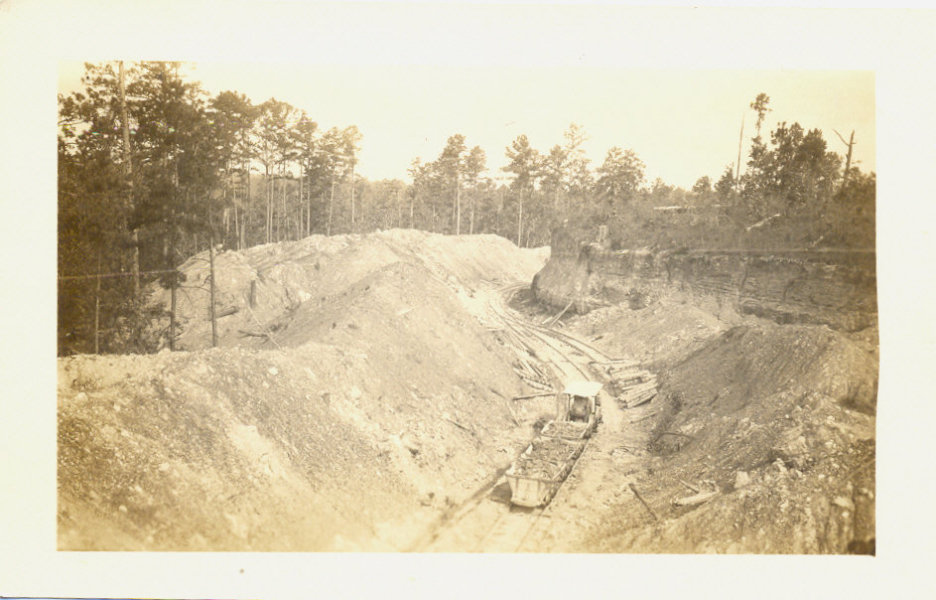 A Northwest gasoline shovel loads clay for it's trip to the L&N spur south of the pit. 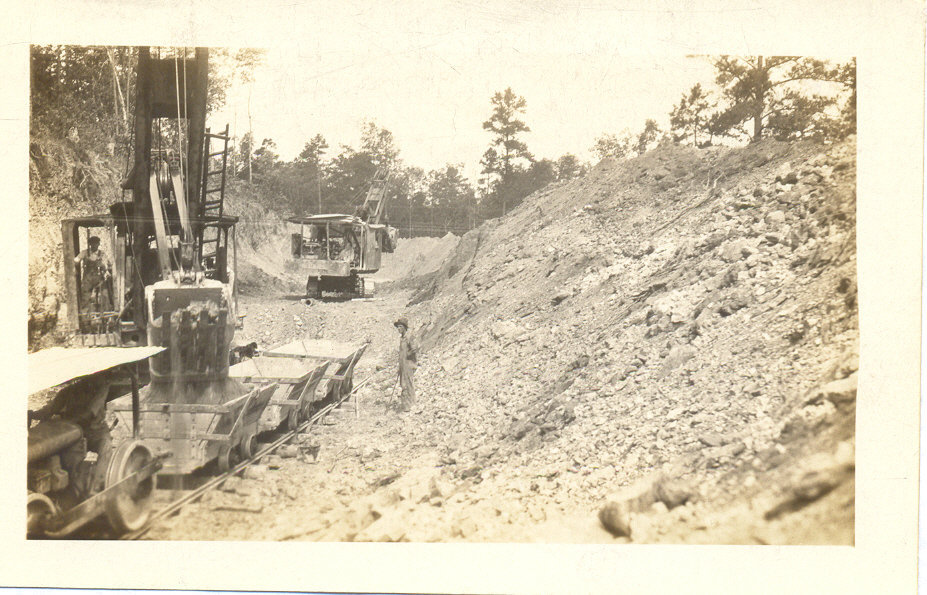 Spoil piles from the clay mining. 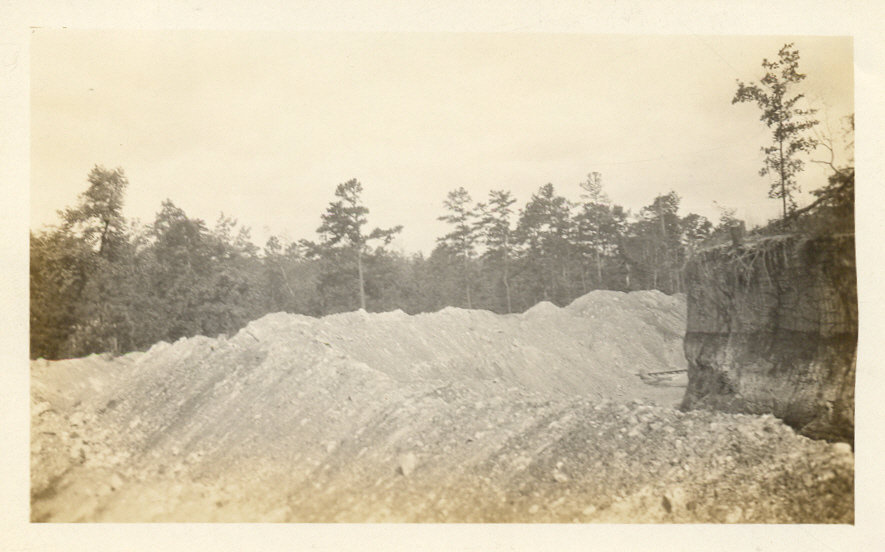 This is a cool pic. Remember, Mr Franklin stated that originally the clay pit was underground coal mine #5. Note the underground workings exposed here by the clay stripping. The coal seam is clearly visible, as are some of the support timbers. 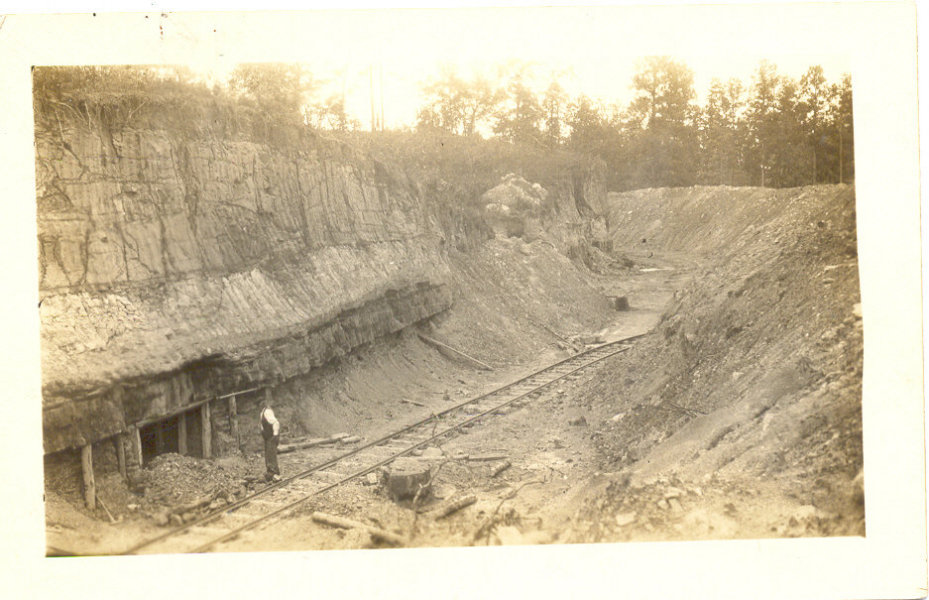 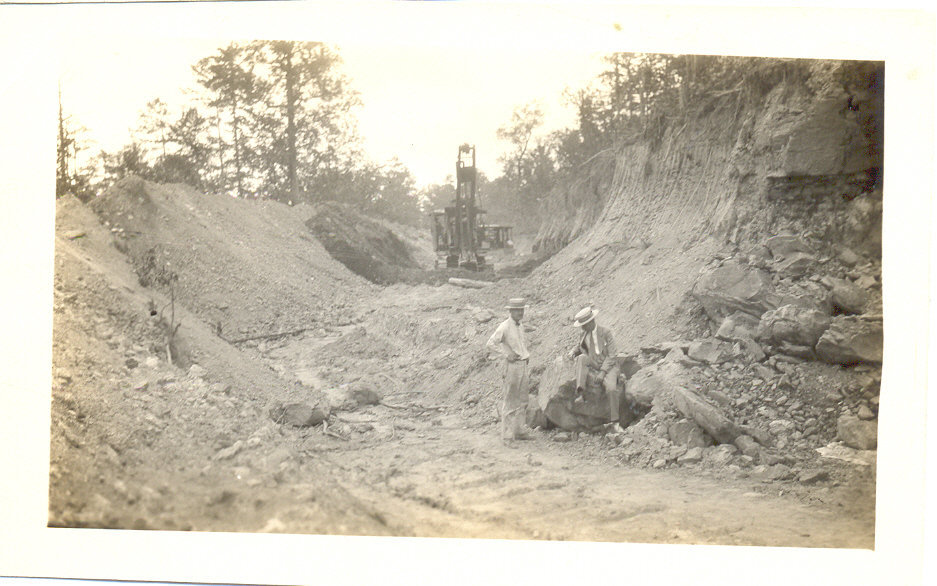 I'm surprise the Bucyrus Erie shovel could stay on those tracks....
M

It's so good to have you post here. It's amazing how much information has become available about Lehigh. Interestingly, I met Temple Tutwiler at a Red Mountain Park commission meeting a few months ago. I wish I'd known he had Lehigh materials!

Please add any other info you think of.

I visited Mr and Mrs Franklin last week. They are such fine folks and are doing well.

Eric, was it Mr Franklin you recorded a year or so ago, i remember listening to a few recordings you did but can't remember who it was.

Steve B said:
Eric, was it Mr Franklin you recorded a year or so ago, i remember listening to a few recordings you did but can't remember who it was.
Click to expand...

Yeah Steve, those recordings were of a conversation I had with Mr Franklin. It looks like my fileden account is belly up now for some reason.
M

My grandfather, Joe Franklin, was from County Limrick, Ireland. He was never able to return home.

The next best thing was to send a passenger car to Birmingham for the Roman Catholic Priests who were from Ireland - to come to Lehigh to spend their vacation with the Franklins.

Uncle Ned can give you more details.

The family stories about riding the train from Lehigh to visit relatives could fill a book.

Boy, I'm glad this thread got bought up again as I hadn't seen it. Great work as usual, Eric, and some real nice information on the people behind the scenes, Molly.

Are you certain that is a Fordson? Ford was religious about writing their name on the radiator frame and I don't see that in this photo. Could just be my resolution of the photo. I believe many or most all the Fordson locomotives were actually 3rd party conversion kits too, so there were probably more variations than there were "standard" ones. Off the top of my head I would have said it was a Westminster Iron Works loco. This is even though it doesn't have the characteristic over-the-hood wheel of the early Westminster's, it does have the solid wheels, and Plymouth looking pilot.

According to Mr Franklin it was a Fordson. If I remember correctly (need to go back to the recordings), he told me it came from Long Lewis Ford (Bessemer, Ala founded in 1911).
L

This conversation is a fascinating find! I was raised in the Lehigh community. My dad and I drove the old Lehigh Road today and were discussing the town, the mines, the road roads and the people that are long gone! I promised him I would do some online research and bring him my findings. He will enjoy this. Thank you for sharing so many years ago.
You must log in or register to reply here.
Share:
Facebook Twitter Reddit Pinterest Tumblr WhatsApp Email Share Link