I'm sure everyone has seen the old Atlas turntable, or even owned one at one time or another. My question is, was there ever a wooden deck turntable like this?? A prototype?? Thanks, Jerome 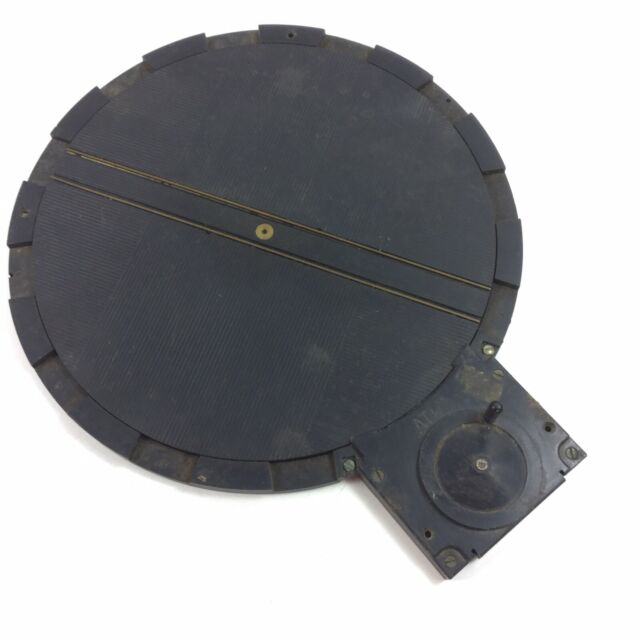 I think B&O has a wooden deck completely covering the normal pit and bridge type turntable.

And, I'll bet the decking is a modern afterthought designed to keep tourists from falling into the pit and calling lawyers.
Last edited: Nov 30, 2019

The Mount Claire Roundhouse, located in Baltimore, MD which is now part of the B&O Museum, has the reputed prototype for the Atlas turntable.
Supposedly, there are several other examples of a completely covered deck turntable, but I have actually walked across the B&O turntable.

Back in the day, Atlas, was searching for a prototype turntable that they could use in their Snap Track line, and this one was readily accessible.
I have no clue as to whether the dimensions match, but a relatively small 4-4-0 like the B&O wood burner "William Mason" ( reputed to have hauled Lincoln's funeral train), fits on the prototype with room to spare. The only certainly, is that the Atlas turntable, matches a 9" section of Snap Track.

Back in the '90s Model Railroader Magazine contained an article converting the Atlas TT to one with a pit. Essentially adding deck bridges to the top and depressing the assembly to match the rest of the track. I have one, that I was going to convert, but never got around to doing the project. Meanwhile, Walthers came out with a more suitable 90' turntable.

Here's a photo of the B&O turntable. And there is a video, too!
http://www.borail.org/turntable-demos.aspx

Thank you guys for the pictures and links. I was aware of this one, I guess I should have been more specific. An outdoor wooden deck turntable. I searched the web but no luck finding one.
M

The B&O museum TT is this way so that patrons can walk right up to the vehicle now on it. But working TTs of this diameter on real RRs were the pit kind; a rotating bridge as we've seen so many many times..I know of one still in use at the end of the Amtrak maintenance facility in Los Angeles,Ca. They still have to turn the diesels of the passenger engines, and steamer 3751 is sometimes in a stall there..
The only real TTs closest to the Atlas were the non-pit gallows deck type TTs. These were found on early steam logging and coal mining lines, narrow and standard gauge, at shops and switchbacks, were wooden and were much smaller than modern steel TTs due to the smaller equipment rotated on them, and were not motorized but turned by a couple people at both ends pushing connected protruding wooden arms..Like the Atlas, they had no pit.
The Atlas basically was/is a way for the model to be easily constructed and mechanized for easy installation on train sets where complete realism is not a consideration...Most fine scale modelers don't use them due to there being no 1:1 scale prototype and several other wrongatudes, if you will, including the brass rails in them which tend to oxidize and cause stall outs.. I still have one somewhere from my childhood in 1957 and it's getting greener and greener.
.....But this does not mean the model train police will come and arrest you if you use one....M
Last edited: Dec 24, 2019
M

jdetray said:
Here's a photo of the B&O turntable. And there is a video, too!
http://www.borail.org/turntable-demos.aspx

Actually the turntable stays fixed in one place and the people, locos and cars spin around it !! It's a real thrill when the centrifugal force starts flying them outward in all directions ! Don't worry though. The engines and cars are welded to the rails......
Last edited: Dec 6, 2019