I am looking at picking up one or two of these in the Conrail scheme and I want some feedback on them. I haven't been able to hold one in person but how accurate are the shells and how is the detail? Anyone add sound to theres? Also if you want to share pictures of your gp35's that would also be cool

I don't have the Conrails, but I do have two GM&O ones they had a couple of years ago. According to the folks at the GM&OHS, some of the paint is not right here and there, but I'm not too concerned right now, since I've still got to complete the tracklaying so I can enjoy my layout some.

I plan to put sound in them one day. They run well. 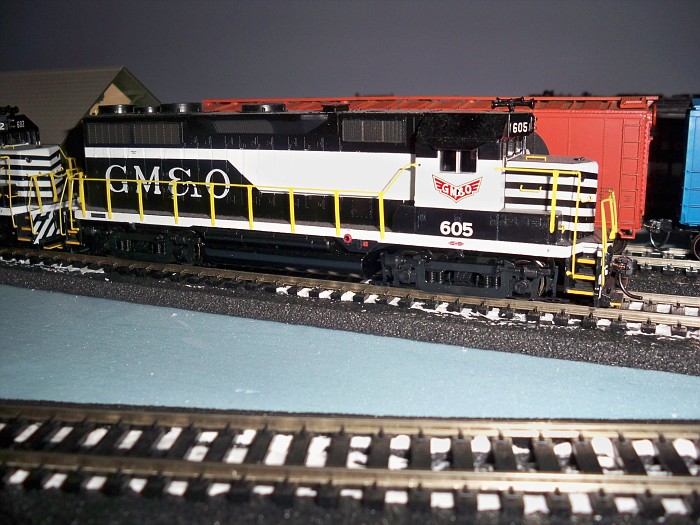 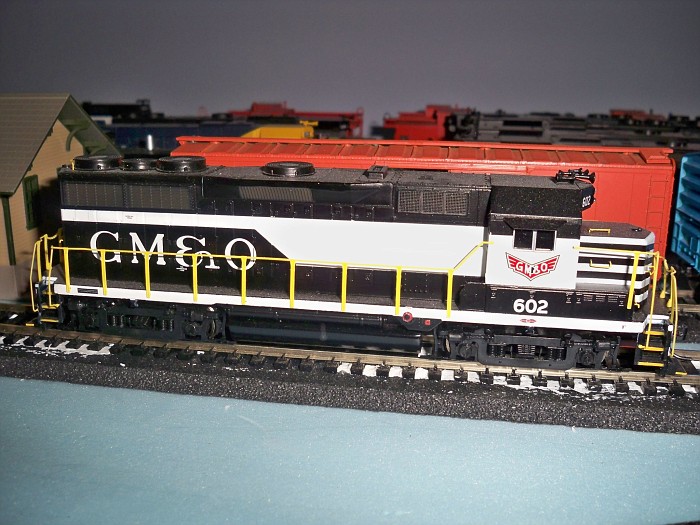 I have a set of the Santa Fe ones and have to admit I like them a lot, very happy with mine. Detail is good for the price, I suspect you could get better detail on more expensive locomotives. The paint is sharp and lettering crisp. Only run mine on DC so far, will eventually put decoders in them, but they run well.

i like it , has nice level of detail (see through fans, lights ) 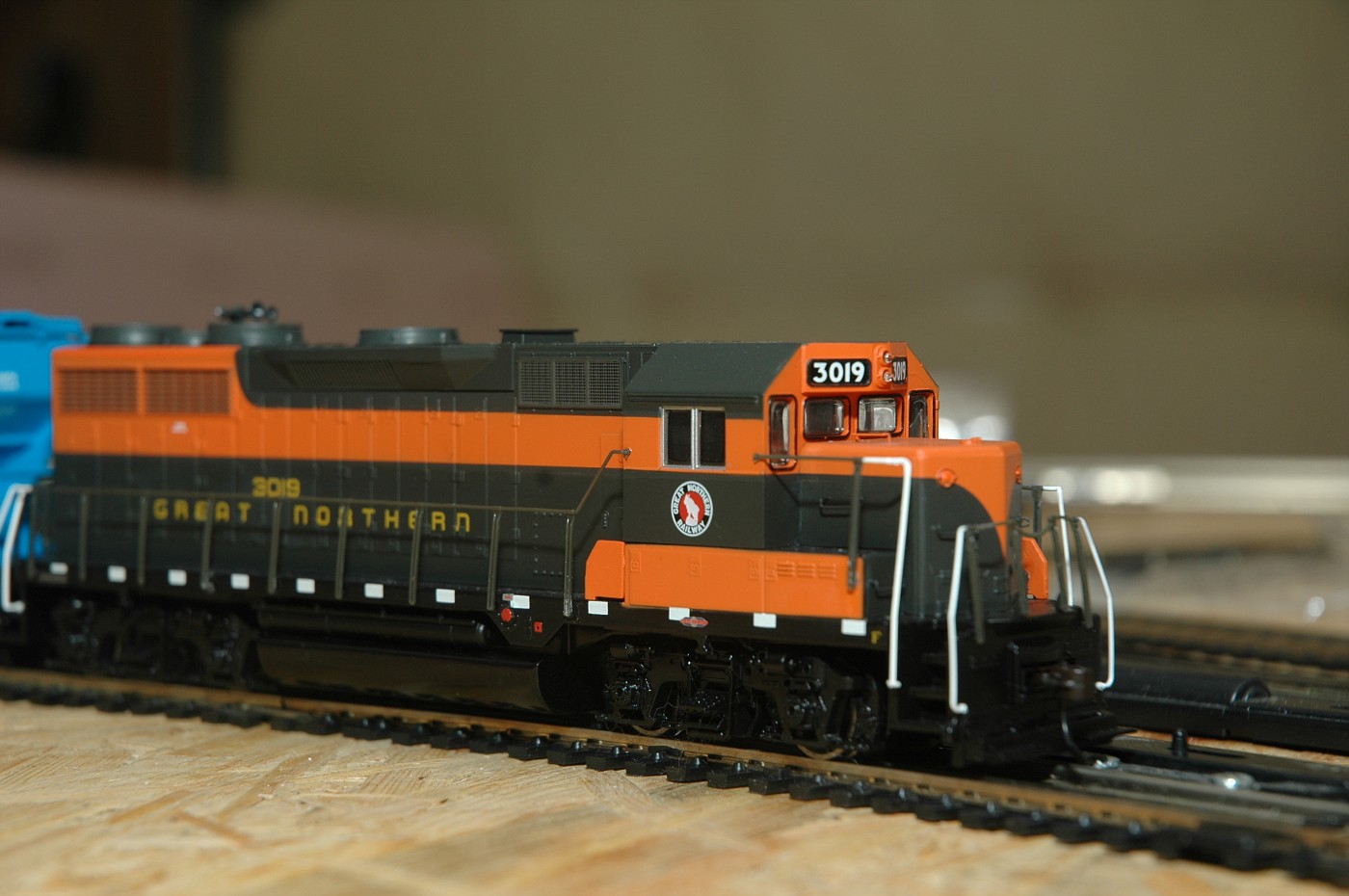 Well I got it today and I must say It blows the pants off my rtr gp38-2. It's a shame the athearn drive isn't a little nicer/quieter but I guess that is a trade off for being so cheap.

it might get somewhat better after you run it for a while. brake in...

The athearn drive likes to growl.

The RTR GP35s are from the RailPower Products tooling and have see-thru fans, wire grbs, etc, but no lit numberboards as theres no light bars in them.

Staff member
Depending on your skill level, you could install a can motor in the locomotive, it would quiet it down considerably. I have a couple of Athearn RTR locomotives, and the drives did get quieter after they had run for a while, a good reason to run yours. Now, if you're planning to put sound in yours, the sound will drown out most of the driveline noise anyway.
F

I haven't even ran it yet guys, I am just assuming it will have that Athearn growl. I will test it later today but unfortunately there will be no break in as that would take forever on my two foot test track Just looking at it in my hand though I am impressed, the details it comes with is pretty stellar for the price. I don't understand why Athearn hasn't bothered to bring all their rtr options up to this level, or at the least have them all be DCC ready.

I don't understand why Athearn hasn't bothered to bring all their rtr options up to this level, or at the least have them all be DCC ready.
Click to expand...

I picked up a GP38-2 in NS paint, which is Athearn's train set loco, and still with the crew-frying headlight and non-DCC compatible. It's a beautiful shell and paint job, with all the grab irons and such added to it.

For some reason the GP38-2 never got the update, and that's odd considering its the most accurate GP38-2 on the market, hood wise.

What's wrong with the Atlas GP38-2? (master series, not trainman)

There are currently no Athearn GP38/40-2s with see-thru fans, or DCC ready/quick-plug equipped. Athearn has been running and re-running the old tooling with new paint schemes. Maybe they should hire Chris Clune again to tool them some nice geeps. (Chris Clune is the guy behind ExactRail. He did toolings for many manufacturers. One of his examples are Athearn's SD50s and SD60s, which he came up with the tooling for.)

I think when they get around to using the RPP tooling for the geeps (if they even have it) then they will be as good as the SD40s, GP35s, SD45s, etc.

I also have a set of the SD45's (lettered for Santa Fe) and agree, they are really beautiful locos although in all fairness I have to admit I like my GP35's more (not sure why). The CF7 is still the best in terms of detailing though since it includes an antenna stand, antenna and air conditioning unit on the cab roof.

None the less, many of Athearns new RTR locos with DCC quicklplugs are awesome locos. So far my roster includes only Athearns except for a single Bachmann GP38-2 which I use for testing purposes.

Except for the two IC GP38-2s that are coming out later this year, I'm not buying another Athearn GP38-2 until the upgrade it to DCC ready. I have 2 Trainman GP38-2s, and they run superbly, and are DCC ready as well. All they need are the details, which aren't too hard to add.
U

I'm confused about why it's taken Athearn so long to upgrade the GP38-2s line to at least have a DCC plug. I've got two of the BB RTR's with the hex drives. They are both good runners but adding all the details and wiring them for DCC is still a chore. The Atlas Master GP38-2 is a good model too, but I prefer the overall look of the Athearn shell. I really wouldn't mind if Athearn just followed the Trainman idea, leaving off the details but making it DCC plug compatible. It seems like they keep increasing the level of detail while ignoring DCC.
You must log in or register to reply here.
Share:
Facebook Twitter Reddit Pinterest Tumblr WhatsApp Email Link