Didn't know about the 'Sulky' slotcars. I live about an hour from the 'Trotters' Museum in Goshen, NY. Might be worth a trip to talk to them about a 'horse & buggy' slot car racer. Although I've done nothing serious about making a set, I've considered whether it might be a 'serious' project for retirement. If the buggy was drawn by a team of horses, you could also add a stagecoach or two, and who knows, maybe a couple of horses with The Lone Ranger and Tonto, too, so they could race each other in their spare time, occasionally swapping out with Roy Rogers and his horse.

Hi folks! Hope everybody here in 'The States,' and those from here, overseas, had a happy Thanksgiving, yesterday.

Its been a while since I posted anything about the layout. In the time since my last post, I've made some changes in terms of the layout. I moved everything to a different part of the basement, when the HO layout had been, and separated the racetrack, from the trains. I'm thinking going forward, that I may use some O27 tracks, with the racetrack, with the idea of running trolleys around to different sections of the racetrack, not the regular trains so much.

As a result, I've been focusing on creating a layout with the HCD and some conventional tables. The plans is to limit the railroads to the PRR, Lackawanna/EL, and Susie-Q. I have one loop which will include only 60" and 72" radii curves, so maybe some day, I can run a PRR T-1 on it. or a GG-1. Otherwise, the other curves are mostly 48" and 60" radii on the other main track. There's a third loop that ties into a part of the 2nd loop, that includes some 36" radius curves, in addition to 42 and 54" tubular track.

Below are some pictures of the current status of things. 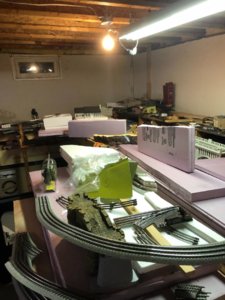 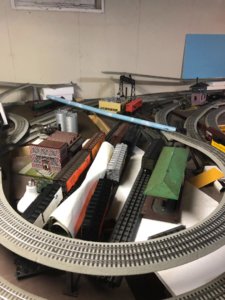 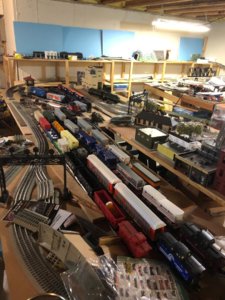 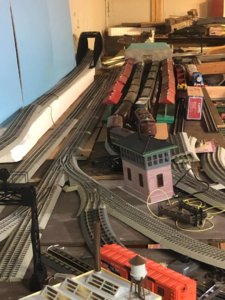