When I pre-ordered my Athearn Genesis Big Boy all those many, many long years ago, I made a boo-boo and ordered the DC version instead of the DCC/sound version.
Now, I know none of the rest of you has ever done anything like that, but I do it on a disturbingly regular basis!
I had hoped that Athearn would have included the speaker housing at least, but no joy. I purchased and installed a Soundtraxx 21 pin NEM decoder for steam https://www.soundtraxx.com/dsd/econami/eco21p.php and it runs flawlessly! Now I am finally getting around to adding the sound system.
To remove the shell from the tender, two screws must be removed from the top of the tender (3 if you have sound) and two from underneath the rear bulkhead. Then the lower front of the tender must be spread apart, and the shell slid back and up to remove it. The two screws that were removed from the top screw into two posts that have cylindrical weights on them. The stock speaker housing is basically two cylinders joined in the middle and screwed to the top of the tender shell. Without removing the screw mounting the speaker housing in place, it is impossible to remove the shell. In the first pic here, if you look closely at the top of the shell you will see one hole circled in red Sharpie. That is where the speaker housing mounts to. So once the shell is removed, the speaker housing lying on the PCB. Here's where the fun begins.
To reinstall the shell, the speaker housing must be lying on the PCB. Once the shell is back on the tender, the speaker housing must be reattached to the tender shell. I've never done it, but my LHS owner assures me: It ain't no fun! You have a space about 1" wide to try and position the housing while trying to get the screw started from the top. He said it helps if you hold your tongue just right.
My sound system will consist of two Soundtraxx 28mm speakers, part #810153, and speaker baffles part #810110. Soundtraxx recommends wiring the speakers in series, so that is what I plan to do. To get the signal from the decoder to the speakers, I will be using a Miniatronics 2 pin Micro Mini connector. This will allow me to completely remove the speakers for repair or replacement if needed. 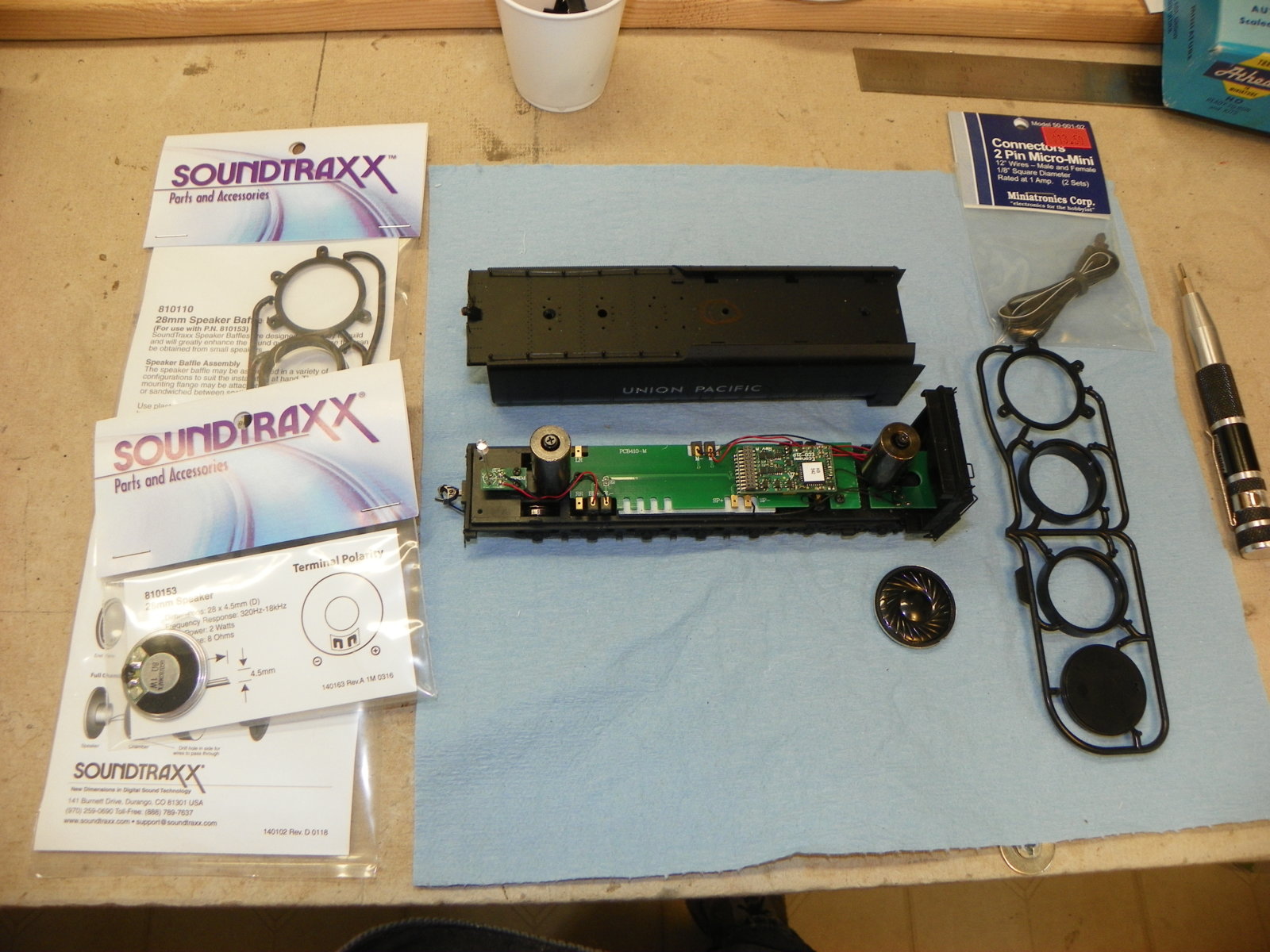 To make it easier to install or remove the shell, I will be making a bridge of two pieces of .080" styrene laminated together in 3/4" strips. The center to center distance of the two mounting post screws on the tender is 4.128", and the weights have a diameter of .466". My plan is basically to drill two holes of .466" diameter 4.128" apart on the centerline of the styrene strip. This will be able to slide up and down on the posts. Once that is done, I will temporarily reattach the tender shell, slide the strip up to the shell, and mark the location of the mounting screw. Then I will remove the shell, and drill and tap the mounting hole for a 2-56 screw.
The speakers will be mounted in the baffles, and the baffles will be screwed to the strip. 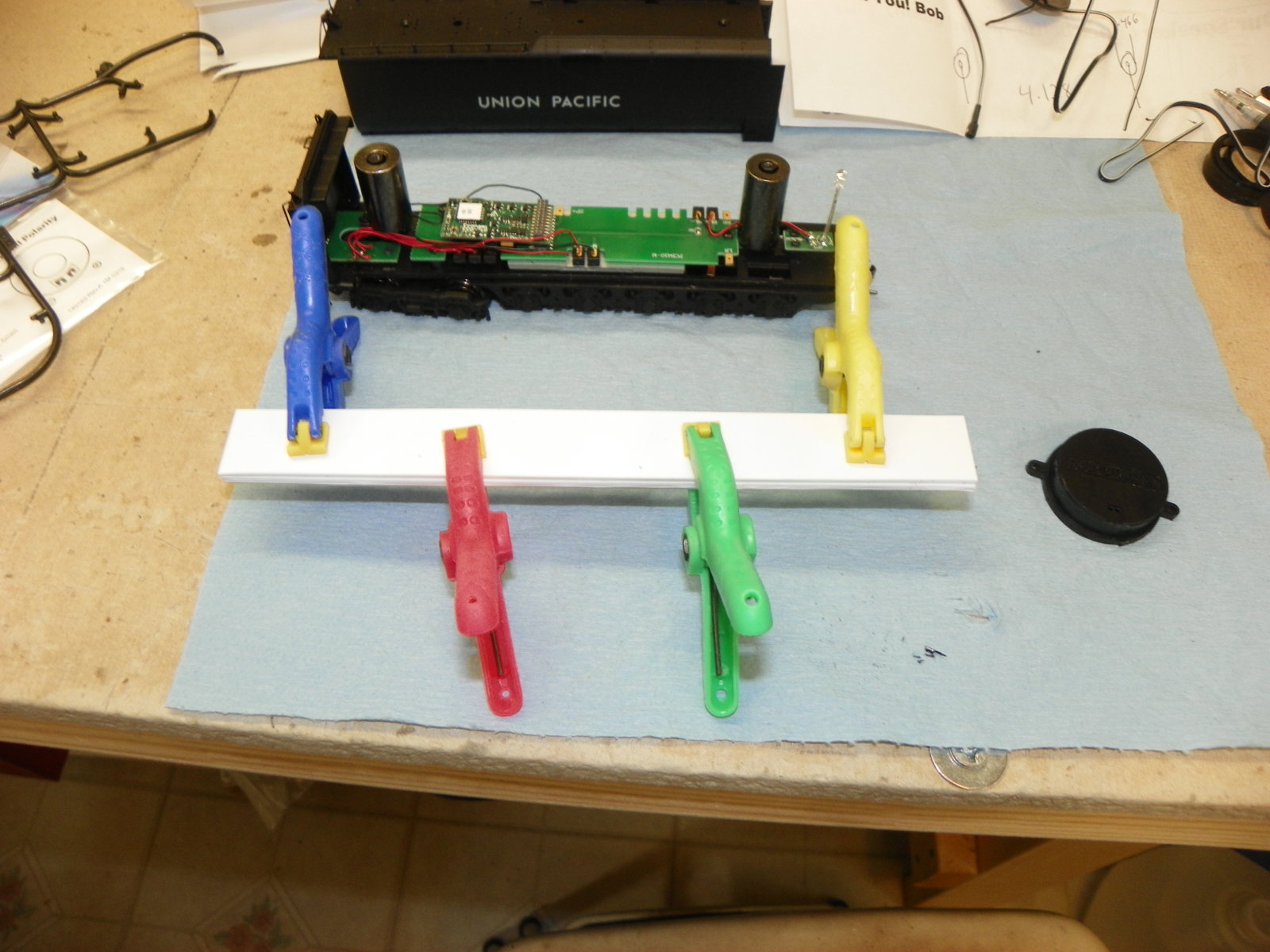 The wire from the Miniatronics connector fits quite nicely through the holes factory drilled in the baffle cover. 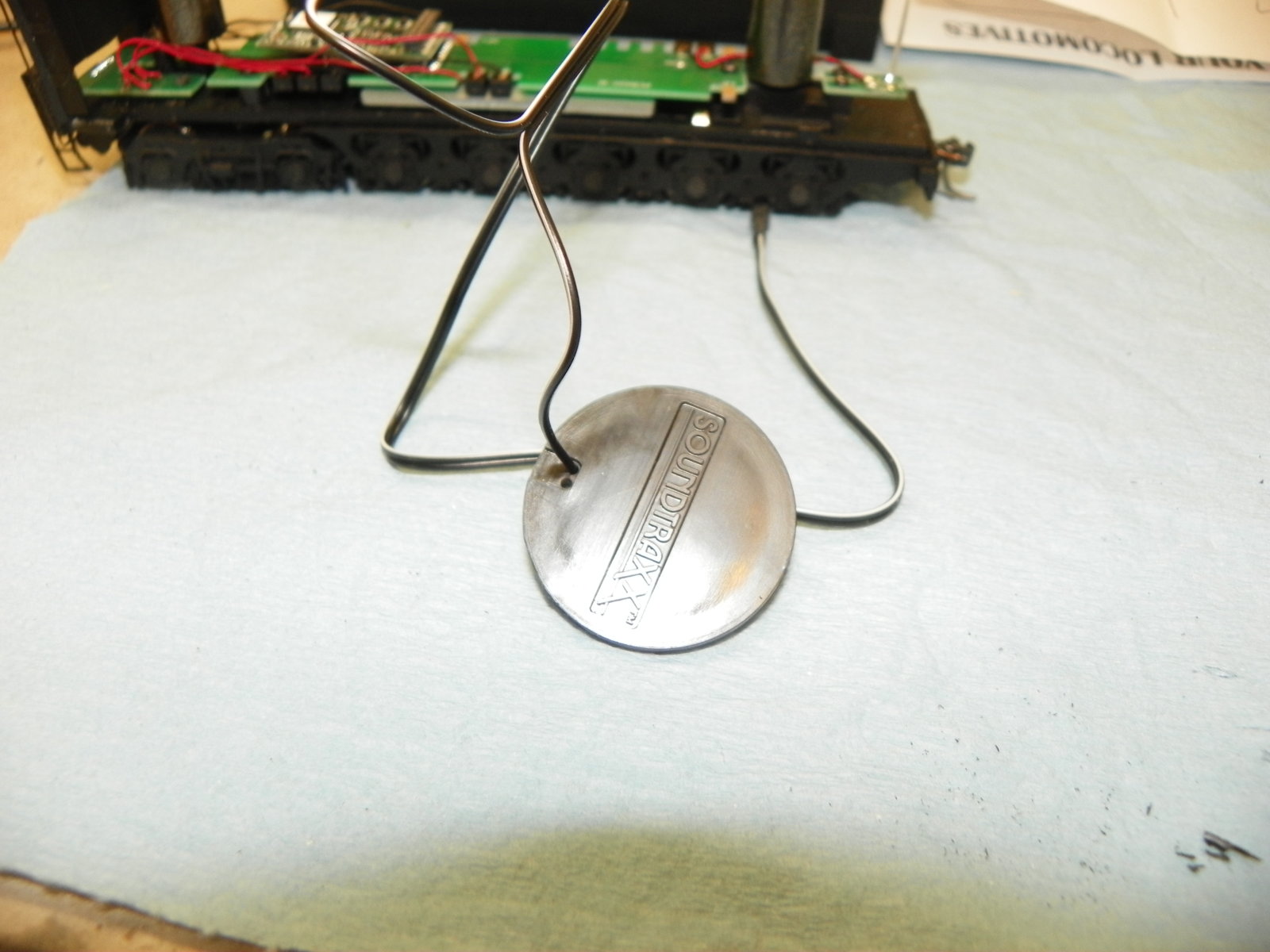 I'll let the styrene lamination dry overnight and work on this tomorrow after church.

And I can put this project into the "done" category.
This pic shows the styrene strip cut, drilled and tapped where required. The speaker baffles can be assembled a few different ways.
The mounting ring could actually have been installed between the baffle ring and cap, but I didn't realize that until I had CA'd the caps into place on the baffle ring.
So the mounting ring is on the bottom of the baffle assembly, and held in place by 1/2" long 2-56 screws. Not ideal, but I'm not redoing this!
The speakers are wired in series, per Soundtraxx recommendations. The black and white wire going to the PCB is the positive lead, the all black wire is the negative lead. The green wire is wired to the positive terminal on one speaker and the negative terminal on the other.
The front of the tender is on the left in this pic, and the end of the styrene strip had to be trimmed like it is because it was hitting the front bulkhead, and the tender shell wouldn't go back on the chassis properly. I've had the shell on and off the chassis several times while getting things aligned. The front speaker is angled because there was not enough room to mount it straight like the rear one. Clearance between the front weight and the mounting hole for the entire styrene strip/speaker assembly required that. 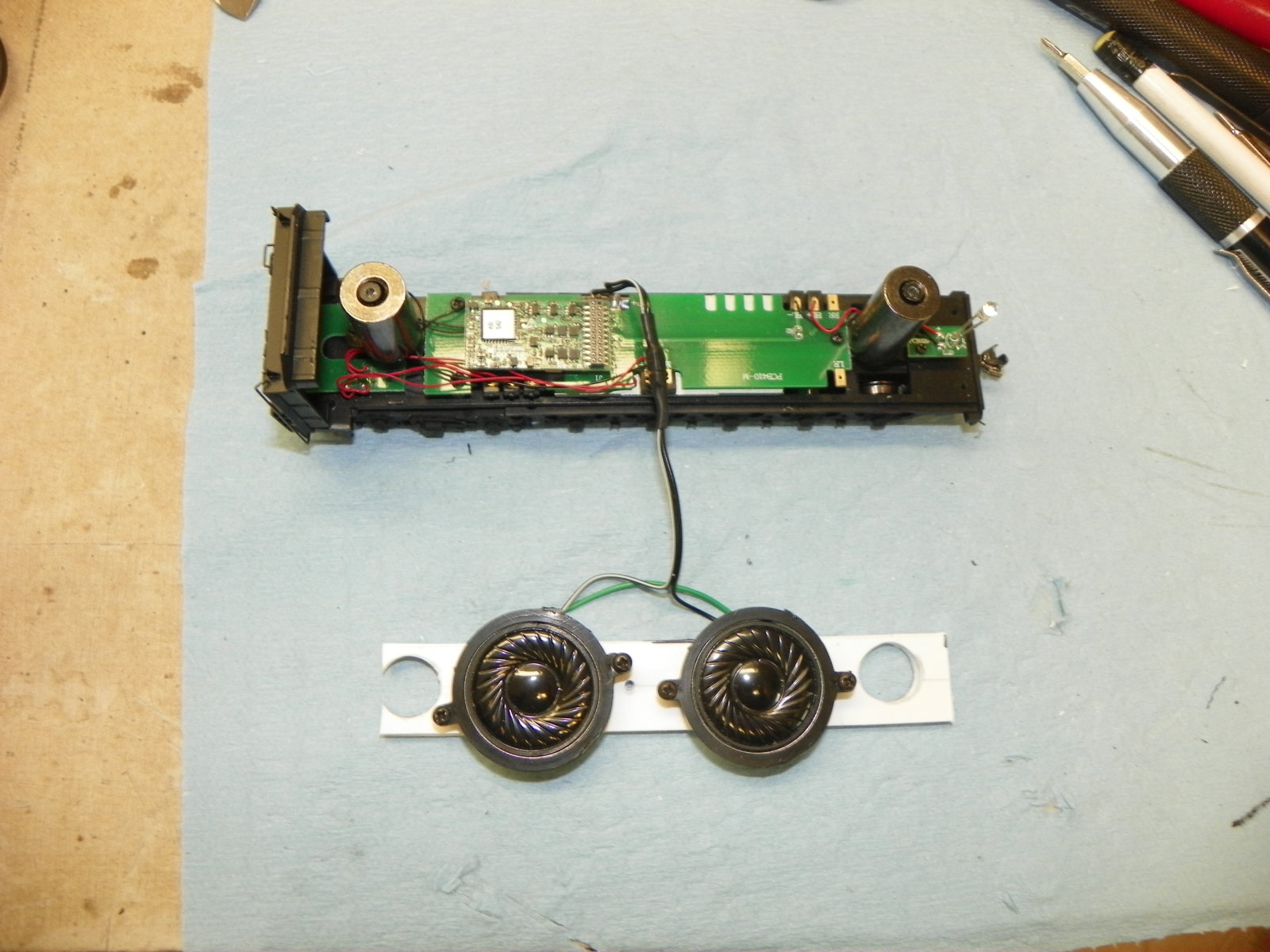 The speakers are a good snug press fit into the baffle ring. Soundtraxx says a bit of RTV sealant can be used if desired, but they seem pretty tight to me, so I didn't glue them in. The holes for the wires got a dab of sealant, though.
Here it is all back together: 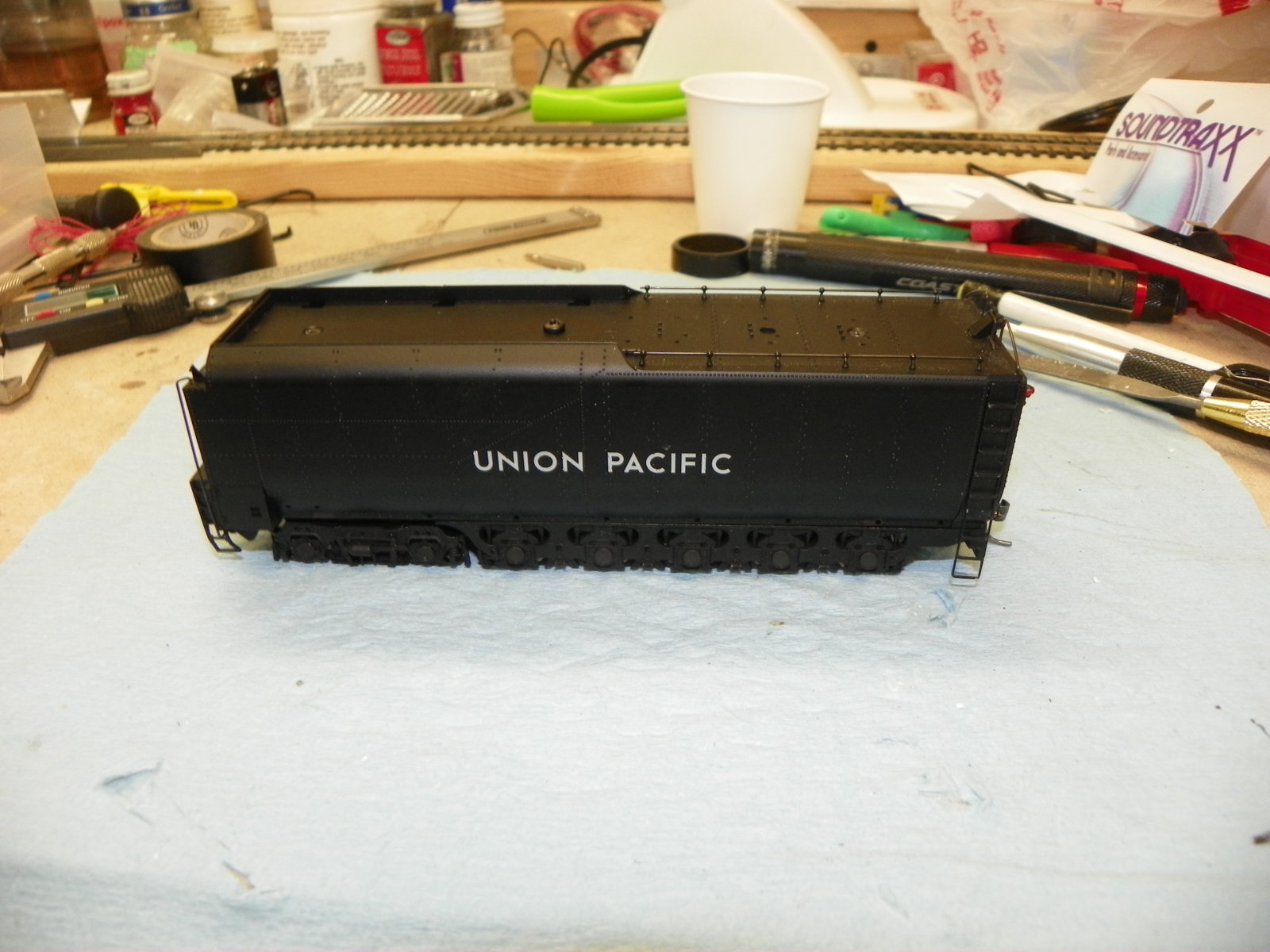 The Pan head screw you seen above the "O" is the mounting screw for the assembly. I had no trouble at all getting this screwed to the shell! I love those rare occasions when things actually work as intended!
I placed the tender on the test track, turned on the power, and was rewarded with sound of the air pump working!
I selected loco 4014, and got to listen to the bell! The Big Boy's all had a Hancock step top 3 chime whistle, so I programmed the appropriate CV with the value for that whistle, and it sounded good! I decided I liked the whistle for the SP GS-4 #4449 better, though, so that's what I gave it. That's also the whistle I gave my Bachmann 4-8-4 #806 when I converted it to DCC and sound. #806 was part of UP's 1937 order and it was fitted with the same type of whistle which was fitted to the Big Boys. So I'm partly correct, but I like the sound, and it's my railroad!
I still need to install the coal load and water tank decking, but I'm going to wait on that until the loco goes on the layout. Which has yet to be built.

Staff member
One of the blokes at my club improved the sound of his UP FEF-3 #844 by placing a sugar cube speaker into the smoke box. It really enhanced the chuff and steam release sounds.
E

It seems these days, that the move is towards having the speaker fire into the sealed enclosure and the back open, especially with the sugar cubes.

The speaker assembly is upside down in the pic. The speakers fire downwards. They really do sound good.

Staff member
The last steam engine I added sound to, I drilled a bunch of small holes in the coal load in the tender. They were unnoticeable, and helped the sound.
E

flyboy2610 said:
The speaker assembly is upside down in the pic. The speakers fire downwards. They really do sound good.
Click to expand...

is the tender floor drilled?
B

I may have to come back to this subject thread one day in the future,..as I purchased their early Challenger genesis with DCC and Sound included. But its my understanding that this stock system of that period of time was not so good?? (I have yet to run it as I did not have a DCC layout at that time, and I am now only building one)

Espeefan said:
is the tender floor drilled?
Click to expand...

I couldn't say for sure, I didn't look. Underneath the PCB is a metal weight, though.

beiland said:
I may have to come back to this subject thread one day in the future,..as I purchased their early Challenger genesis with DCC and Sound included. But its my understanding that this stock system of that period of time was not so good?? (I have yet to run it as I did not have a DCC layout at that time, and I am now only building one)
Click to expand...

This is the first Athearn Genesis model I've owned, so I'm not going to be much help with the sound quality of earlier models. I don't know what decoder is in that one, but if it's a Tsunami TS1000, they have been superseded by the TS1100, which is supposed to have much better sound.

bnsf971 said:
The last steam engine I added sound to, I drilled a bunch of small holes in the coal load in the tender. They were unnoticeable, and helped the sound.
Click to expand...

I may do that in the future. I would have to drill some holes in the top of the tender as well, since the coal load is a removable piece on this model. I think they made it that way because this model is available with a coal or oil tender, and that way only part of the tender has to be different. Much of the area I would need to drill is directly above the speakers or other obstructions, so it may be dicey trying to find spots to do that. They do sound pretty good as they are, which is the factory orientation.
You must log in or register to reply here.
Share:
Facebook Twitter Reddit Pinterest Tumblr WhatsApp Email Link