There are as many reasons to do this as there are layouts to do it on, so...


WHAT- is/was your "ultimate goal" when you found yourself with a "Hankering" for MRR?


My "Goal posts" keep moving, it was just to get trains running, now it is grades and inclined curves, next, it will be scenery. How bout y'all?

My holy grail is to keep the hobby interesting and developmental...well, actually one begets the other, I guess. I try a new scenery or roadbed or some other technique with each layout. Last time it was a large helix, and double mains, including running in the helix. This time it's all cookie-cutter sub roadbed and foam scenery covered in flocking...not the ground goop of the last two layouts. I'm returning to a painted backdrop. And I'm happy to say that I'm having fun. The two go hand-in-hand.

new guy said:
ThWHAT- is/was your "ultimate goal" when you found yourself with a "Hankering" for MRR?
Click to expand...

I have never been in the position to find myself faced with this new thing called model railroading, I having had trains the entire memory of my life. I can't answer the "when I found" part. I am certain even as I child that I had goals either explicit or subconscious, but through all that time I have developed an "ultimate goal".

In junior high I started noticing this model railroad that appeared often in the magazines called the V&O. No matter how much I read about it, I could not figure out if it was a real railroad or not. In fact, some of the articles I couldn't tell if they were written about a model or a real thing. Many years (Decades) later I learned the real story of the V&O. And there in is my goal. I want to develop a model railroad that is so believable in all aspects (scenery, theme, era appropriateness, roster, rolling stock, operations, backstory, and longevity) that for anything published about it, a general reader would not know if it was a model or real.

The Goal is to have a model railroad that is so good it has its own historical society.
N

My goal has always been to enjoy the process of building a model railroad. To this end, I have far exceeded my goal!

I think more than anything I look for the next "can I pull this off?" project. I've created what I think are some pretty great custom paint/decal jobs, I've created a fuel refinery and distribution plant that includes the pieces of five different kits. It's always about the challenge to me. That's what keeps it interesting. Having said that, there's also an almost orgasmic thrill when you get a really great new locomotive or finely detailed piece of rolling stock right out of the box. I think the myriad facets of this hobby are what keeps me interested. If I get tired of building locomotives, I can work on some buildings or scenery. When I'm sick and tired of ballasting track I can lay some new track instead, though obviously the ballasting thing is going to come back and bite me in the butt there. There's always something new to learn if you're willing to push yourself to see what you can accomplish. That, more than anything else, is why I know I'll never tire of this hobby.
R

My holy grail is to build a layout big enough so that my trains have somewhere to go rather than just going in circles; i.e. some run space to go between a few towns and industries before going into staging.

I think I am finally getting close to mine. After the layout was started probably over 30 years ago, everything is finally coming together. All of the track has been completed and I have pretty well run out of places to put buildings. Over 90% of the scenery is now in and I can enjoy watching trains rolling through the scenery and picking up and dropping off freight cars at various industries on the layout. Some times when I go down to the train room to work on a project I'll find myself running trains instead of working on the layout.

I don't think a layout is ever finished as over the years there are many things that I have learned and skills I have gained that can be used to refresh or improve older parts of the layout.

What I was wanting to accomplish is to show how a railroad can interact with the towns and the various industries in the towns and I think I have nailed it. A railroad need a reason to exist.

The Grail for me is The Lionel Christmas LEGACY 'Pioneer' Zephyr http://www.lionel.com/products/christmas-legacy-pioneer-zephyr-6-38848/

I can't justify buying a train that is too big for me to run. The minimum curve is O72, but if I don't think of something else quick I will be ordering it! 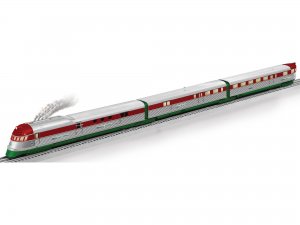 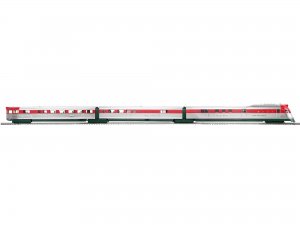 montanan said:
... A railroad need a reason to exist.
Click to expand...

That is exactly what has been driving my layout design and train purchasing philosophy! What really made the "lightbulb" come on for me, was reading Tony Koester's book Realistic Model Railroad Operation, especially the second chapter where he shows how to make even a 4x8 interesting with the different industries that can be switched - while using the other side of the scene divider for staging.

My layout fills 90% of a 24ft-by-24ft garage so it is probably as large as I can ever hope to make it. The track is laid and I have ~half of the structures built, but no scenery as of yet - that is my Achilles Heel. But my trains are running, and there is enough industrial switching to keep 6 operators busy for 2-3 hours. My goal now is to someday have scenery that is good enough to look like real-life scenes in photographs. Getting there may take a lifetime...
You must log in or register to reply here.
Share:
Facebook Twitter Reddit Pinterest Tumblr WhatsApp Email Link