Staff member
At least that gives you incentive and motivation, not that you need it Doing things step by step is a good and logical way to go about it.

What about feeders to the diverting routes of the turnouts? And the inter-loop of track on the right hand side of the track plan.

Yeah, I enjoy doing the scenery more than anything else I think, so I am anxious to get started on that. I need to order a few more pieces of track yet so I can finish the oval part. Then I'm going to have to work on the DCC to decide whether or not that is what I want to use. I have one Athearn loco that is DCC and sound equipped, and one other decoder for one of my Atlas 8-40B's, so seems that is the way I should go, just depends on how complicated it ends up to be.

DCC wiring for your layout will not be complex. Test as you wire and you'll be an expert DCC installer in time.

The wiring I'm not too concerned about, it's just the basic set up and operation of it. I didn't get too far into it on my old layout before I had to quit.

DCC set up is so simple. 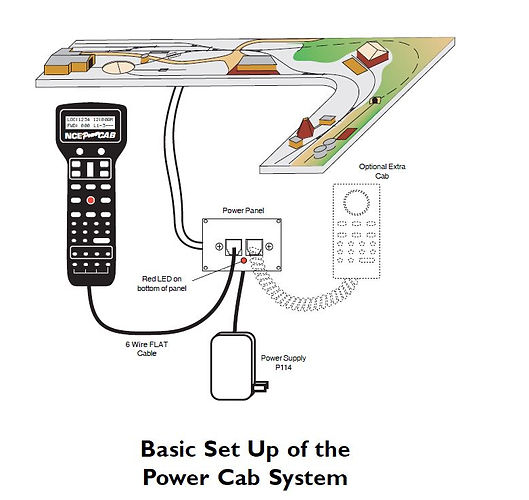 From here you can run trains.

To add to what Greg said, here is how I might wire the layout:

Not sure what turnouts you will be using so this is based upon Peco Insulfrog or any non electrofrog type turnouts. I like to add feeders to "at least one end of my turnouts to ensure they do get the power needed. Again, this is just a personal preference.

As Greg said, wiring for basic DCC is not hard at all, in fact, no harder than wiring for DC. To keep it very basic - run your wires from the power source (your controller) to the track and that's it, it is that simple. All adding feeders does is ensure a good, solid power supply to the areas of the track work the feeders are attached to.

Running a DCC system is just as easy at a basic level. All DCC equipped engines are pre set to a code, a number. Normally that code or number is 03. That is what the DCC controller uses to identify the engine. Therefore, if you have one engine and put it on your track with the controller set to 03 (a default setting I think) then your engine will run.

Each engine comes with its own number though, ie: 4478 that is printed on the engine itself. You can change the 03 number (default) to the actual engine number, in this example 4478. That then becomes the number that your system uses to identify that engine allowing you to run it independent of any other engine on the layout.

If you buy another DCC equipped engine, and you have changed your first to its own number, the second engine will have a default identifying number of 03. You can then run that on the layout, with the first engine (4478) at the same time BUT need to change your Controller from on e number to the other to have control over that engine. So, if you run engine number 4478 and engine number 03 together, you can set the speed etc of engine 03 and let it run on it's own. You can set your controller to engine 4478 and be able to fully control that engine with the controller while engine 03 does it's own thing in accordance with how you first set that up, speed etc.

It sounds complex, but it really isn't once you learn how to set the individual engine numbers in your controller. Normally, or at least with NCE, you use a button on the controller to change between your engines. The hardest part is setting up the engine numbers.

Of course you could set the engine numbers as anything you want.

Thanks for the explanation Tony. As I remember it, the instructions for the Digitrax was kinda involved, but I did have the Athearn running ok, but never got to consisting.

Staff member
You'll need to talk to someone else for much more than what I have already said - that's about the limit of my DCC knowledge sorry. With any luck, when you get to putting a consist together, those experienced in setting it up with the same DCC system as you have (or similar) will enter the conversation.

Consisting is simply. there are three ways to do a consist. The most simple method is just have two locomotives have the same engine number and if you want the locomotives to be tail to tail, change CV29 to 1 or just switch motor leads.

I found that locomotives of the same manufacture, (ie GP-38 for an example) are close in speed matching direct from the factory. I have some Atlas Classic and others that run perfectly together. Check here for specifics on speed matching.