Which bridge to build?

With my new expansion, I now get to build a new bridge. I was thinking about a modern steel trestle style bridge (Viaduct bridge?), but I'm also thinking a braced arch bridge would be easier to build. The span it need to cover is 4 feet (or roughly 350' in HO scale, if I did my calculations correctly).

I'm thinking about scratch building this, so which one would you build?

KB02 said:
I'm thinking about scratch building this, so which one would you build?
Click to expand...

I'd build whichever one fit the space best and whichever one I wanted the most. An arch bridge would be really impressive, but there should also be a "reason" for it. Huge canyon, deep waterway, whatever. The railroad wouldn't go to the expense of an arch if they could do a simple viaduct and get the same results.

As for how hard it is to build. Well, if you enjoy scratch building, it's a fun challenge. If you're mainly interested in the end result, I'd give some serious thought to the Micro Engineering stuff. It's not scratch building, but you can either buy a kit or buy components to customize as you need for your layout. The stuff is affordable and it looks really good! 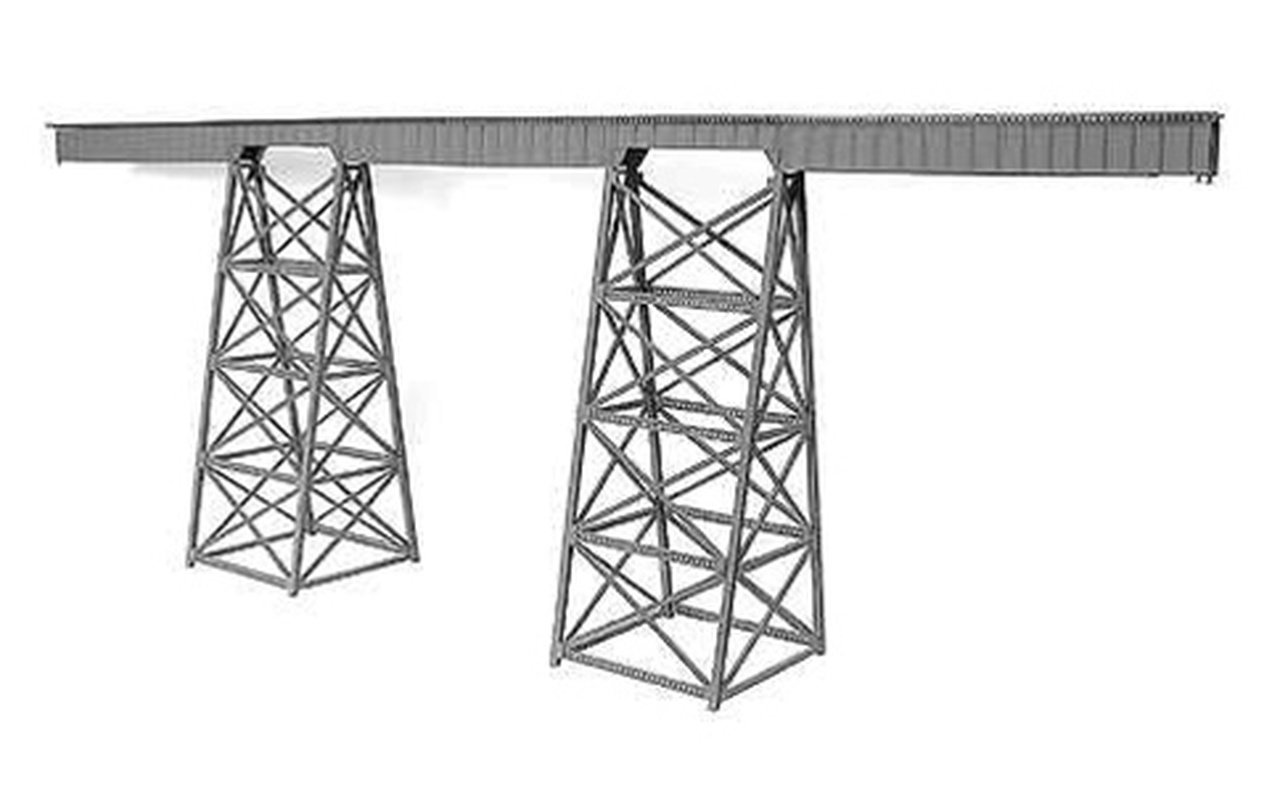 The rails' preference was always to fill. If that didn't meet their needs practically and/or economically, they'd bridge. If two girders, or a combination with a central pylon could do it, they'd do that preferentially. If not, they'd pay through the nose for a complicated truss design to cover the span. Costs go up non-linearly as the span increases.

The various constructions of viaduct are always gee-whiz getters, whether you drive under one or see one well-executed on a layout. But that's where it gets tricky: you have to do some detailed planning and careful construction, not least of which would be the surrounds. A viaduct that's only three real-world inches high isn't going to give anyone pause except to remark on how odd it looks. But, one set in a chasm or over a gorge where it towers 12 real inches high is going to elicit oohs and aaahs. My point (yes, I have one) is that what you craft should look convincing and realistic. Trying to fit a viaduct where it doesn't look right is going to disappoint you. Is this extension going to afford you a realistic setting for a viaduct? Maybe a timber trestle would look better, or simply a girder span if your era is after 1950, maybe a deck truss? For example, I seem to recall that the Atlas Warren Truss can be installed 'upside down' as a deck truss...might be wrong about that.

And I can understand the interest in a viaduct for that span. It makes sense. And, despite my earlier post, there are short trestles or long viaducts that aren't on mile-high pylons or frames. But, it seems to me the wow factor warrants something at least middling on the spectacularity scale, especially on a train layout.

This is the High Level Bridge over the Oldman River in southern Alberta, just west of Lethbridge. It's the longest steel structure of its kind anywhere. 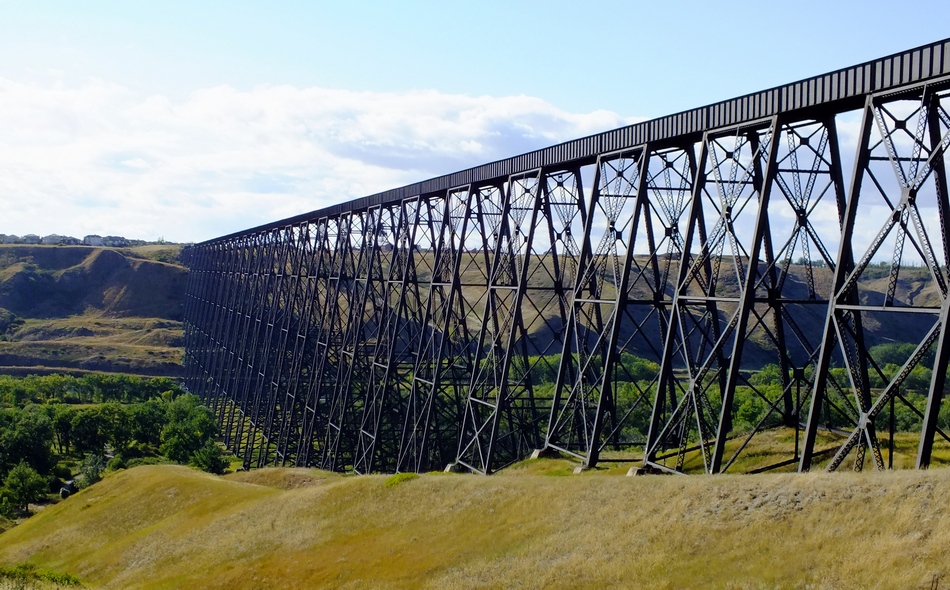 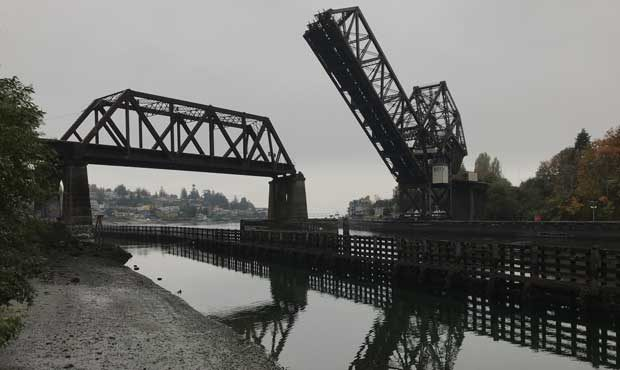 How high will the bridge be? That would be a contributing factor as to what bridge would work best.

Crandall, I’ve been over the High Level Bridge on a windy day, it was one of the scariest things I’ve done!
Last edited: Apr 27, 2020

If you're going to build it from scratch, make sure that's what you want to do and that you have the time. 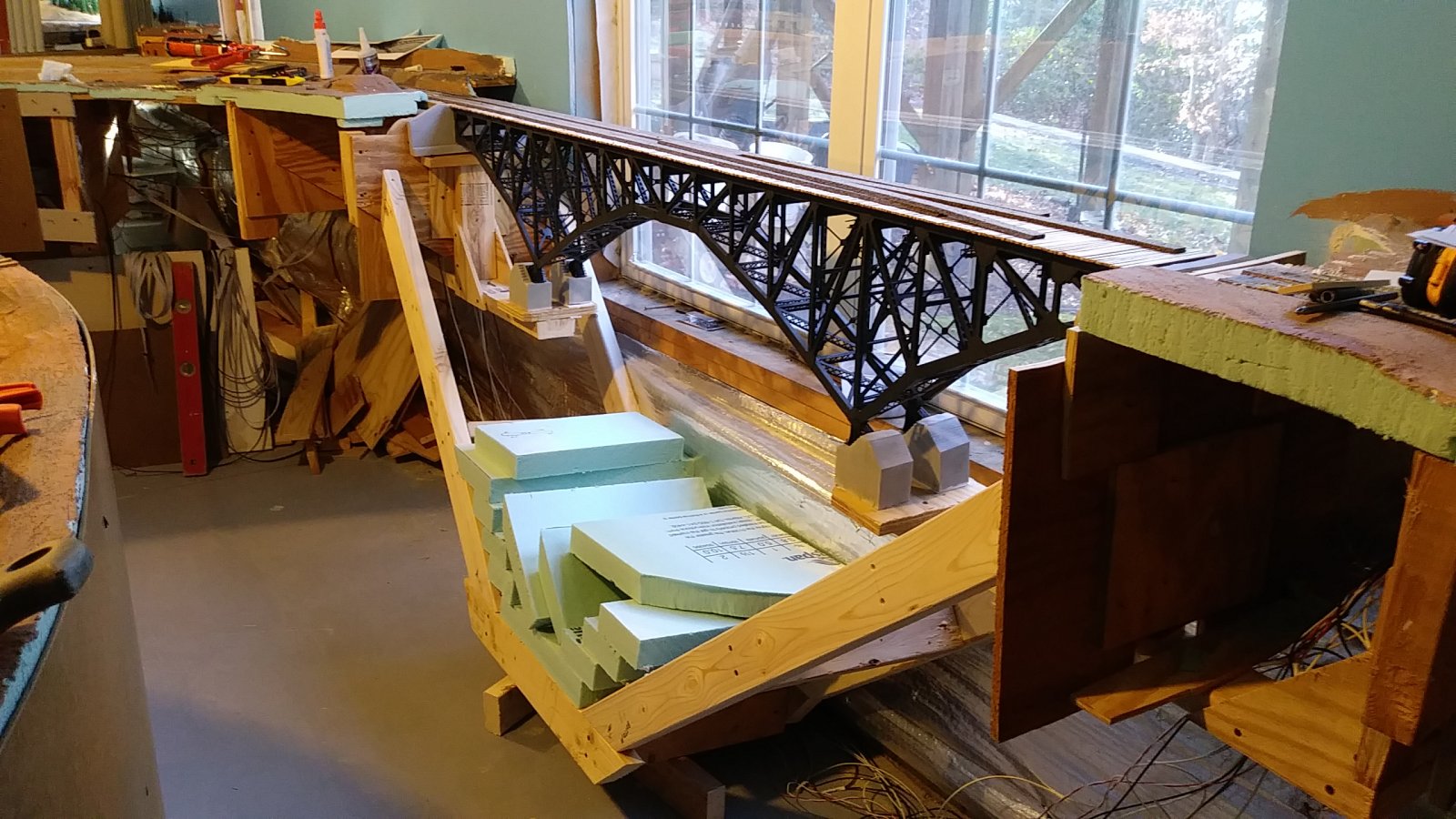 D&J RailRoad said:
If you're going to build it from scratch, make sure that's what you want to do and that you have the time.

Wow, that's amazing! Well done too, with that deep canyon you've justified the need for such a impressive (and expensive to build) bridge.

Here's a prototype version that shows the same kind of location. 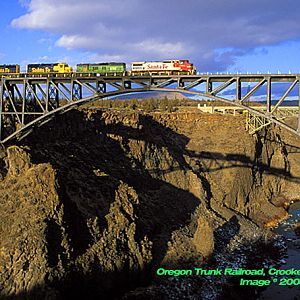 Video version.
I posted a lot of the work on this bridge in a separate thread on this forum.

I am starting this thread as I suspect there will be a lot of activity in the construction I am undertaking. I have a section of my empire that was designed to have a bridge installed. At the time of construction, I didn't have any idea of what kind of bridge I was going to put there. The...

That high level bridge is just an amazing structure.

And Ken, I loved watching your Diablo Canyon bridge come together. That was an epic built with such a satisfying result (at least for me as an audience member).

As I was thinking About this tonight, I was doing some research and it turns out I didn't need to look much further than Portageville, NY. Both structures I was considering side by side in this pic: 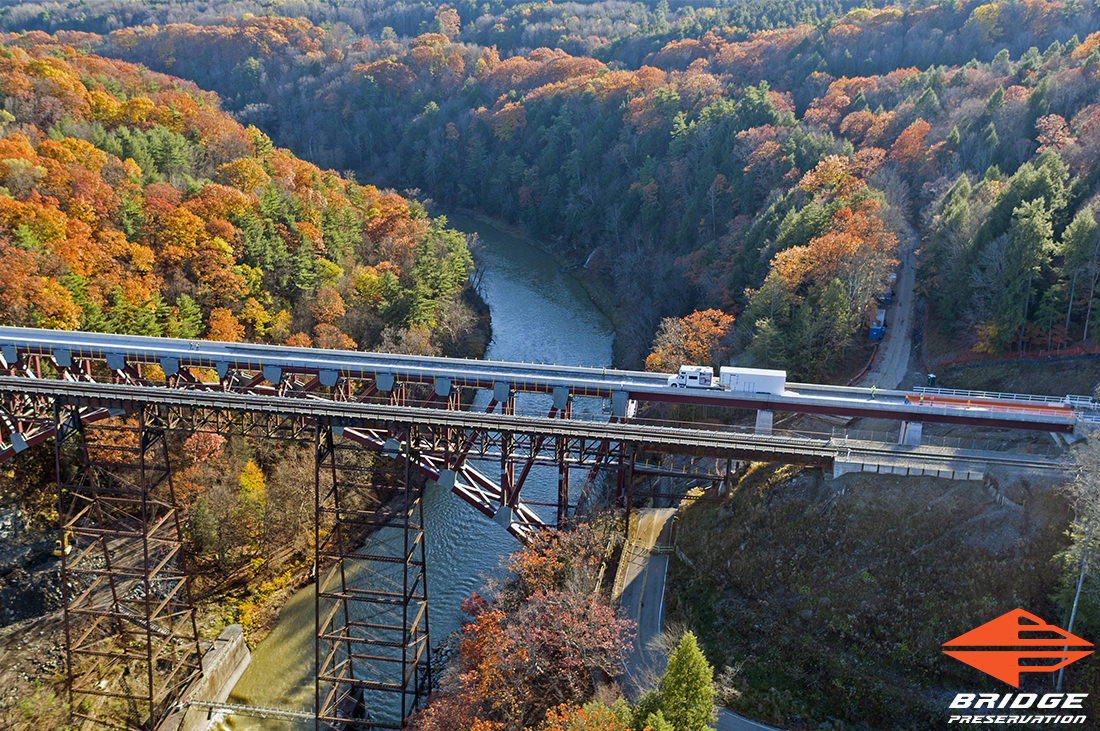 This, for me, is one of the greatest things about this hobby. Doing the research and finding these great stories. The steel viaduct bridge was built in 1875 after a fire destroyed its wooden predecessor. It was built in a CRAZY SHORT time span (and that’s by today’s standards, let alone 1875) and saw it’s last train in 2017!

Thanks, Bob, for pointing out Micromark. I can get the pieces I need to build a viaduct span for about $110. The more i think about it, though, I’m leaning towards the arch.

Staff member
Here's a favorite of mine, Browning, MT. 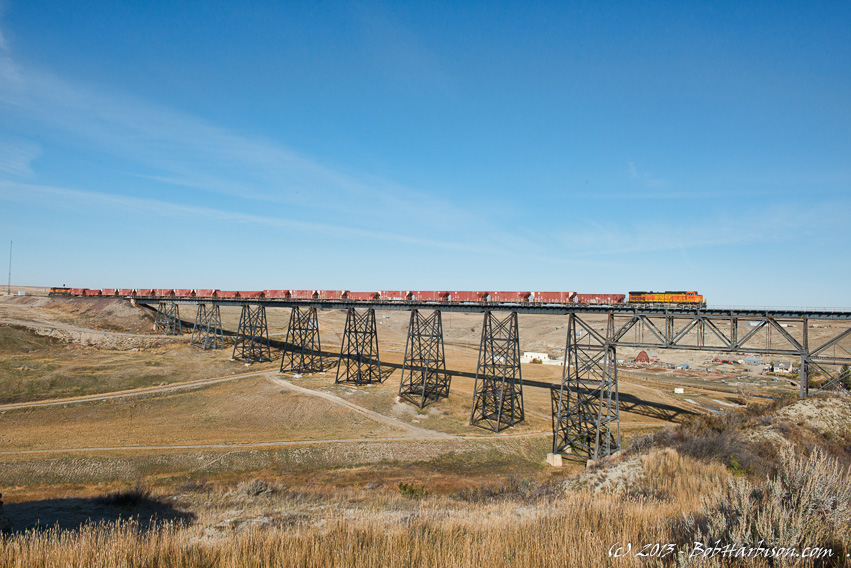 Just ‘cause I’m geeking out about this: the original wooden trestle opened in 1852 after taking just over a year to build. 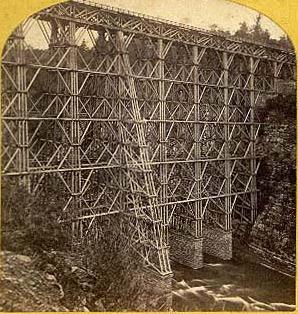 After a fire destroyed it, the new was built in just over a month and a half!

If your building your own fantasy road ,by all means do whatever suits your taste. If your trying to stay with a particular prototype I would go with something representative of that road.

Open trestles look great and have a vast open feel , at least until that first derailment and then its a "Bridge on the River Kwai". Thru trusses are a little safer .

Theres nothing quite a like seeing $350 locomotive taking a nose dive into the benchwork abyss followed by another $350 worth of train , Don't let my pragmatism deprive you of that feeling.


All kidding aside , It depends on the depth of the crossing vs length, For a "real" railroad its about cost , It makes no sense to cross a 100' gap thats a 1000' deep with a trestle , the railroad could build 10 bridges for the cost of a 1000' feet of support structure , by the same toke it doesn't make sense to cross a 3 mile wide gap ,200 ft deep with a single span truss.

Bottom Line :
Look at it from a cost perspective , don't haul the Golden Gate Bridge up the side of the mountain to bridge a gap 100 ft deep when you have 150ft tall pine trees all around you . Same thing goes for concrete / stone dont build a concrete bridge / viaduct if the nearst concrete is 10,000 ft down the mountain .

GeeTee said:
Bottom Line :
Look at it from a cost perspective , don't haul the Golden Gate Bridge up the side of the mountain to bridge a gap 100 ft deep when you have 150ft tall pine trees all around you . Same thing goes for concrete / stone dont build a concrete bridge / viaduct if the nearst concrete is 10,000 ft down the mountain .
Click to expand...

He's got a good point, but the good news is that you can design your layout to justify the bridge you want. That bridge I posted in Bend, OR is a great example!

Here's a google earth view of the location. It's high desert, and the ground in the area is quite flat. Sure, there's mountains, but the area near the bridge is pretty level, practically speaking. Looks a lot like a 4 x 8 sheet of plywood, LOL. Then, all of the sudden, there's this giant canyon, vertical walls, and no practical way to cross it other than an arch bridge. My point is that you could have a relatively flat layout and yet still justify having a giant canyon with a bridge to match. 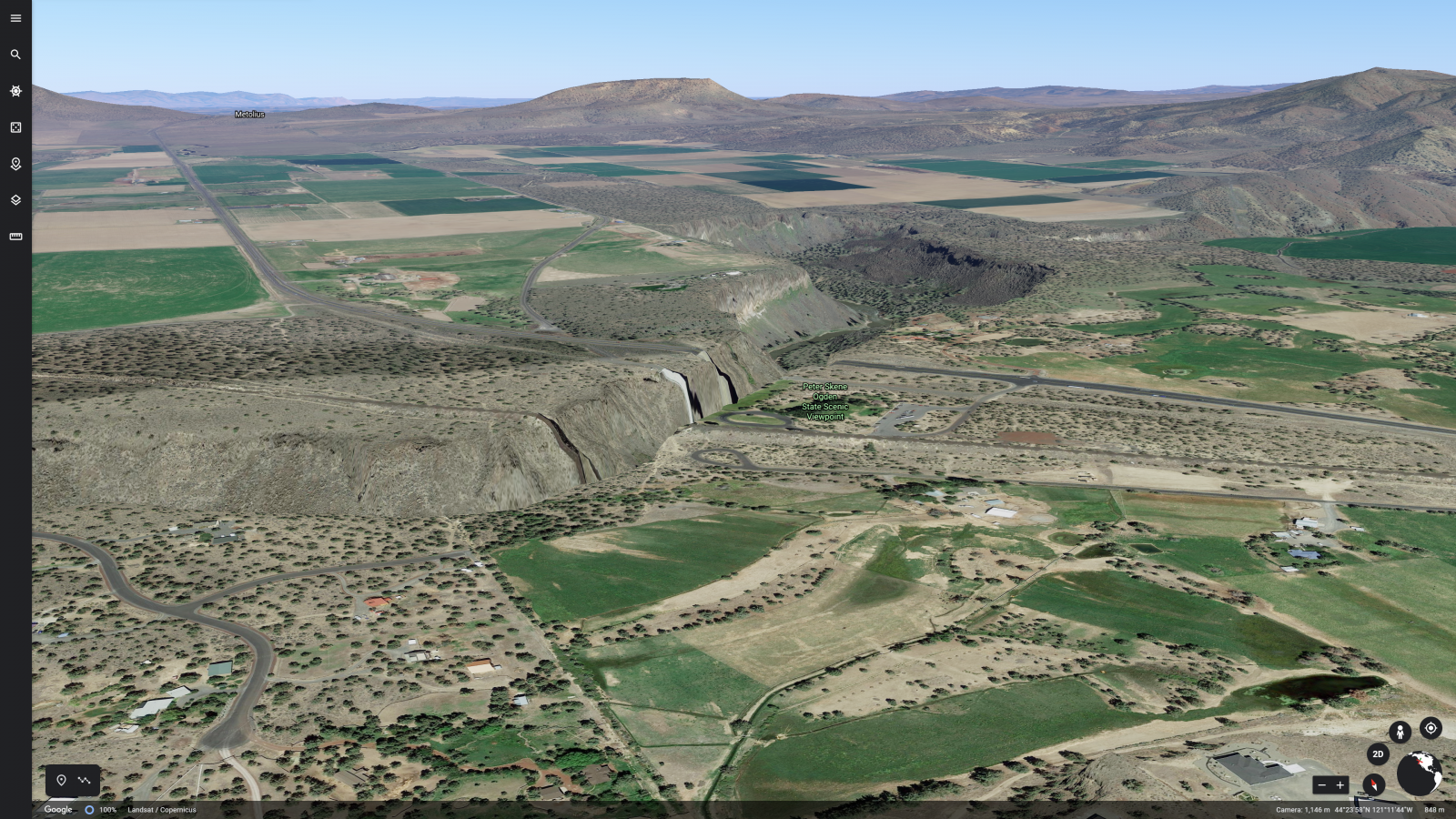