When things don't go so well

Got an e-mail from a friend from church who told me a fellow he knew want to meet me, something about seeing my work on line. Turns out the guy is the president of a local museum model RR group that has a small layout at a local restaurant. Nice fellow. Looking for volunteers to man the layout. I had to turn him down. My job requires too much travel. We did have a nice talk and I mentioned my fondness for brass models. He was delighted about that and took me to a display case and showed me a brass model that had been donated. It didn't run and they didn't know anyone who could fix it. Until yesterday I ended up taking the thing home and looking at it. It's a nice little NP 4-6-0, but it had a lot of problems. Back in the mid 70's labor costs in Japan were going up, and the Dollar was falling against the Yen. Importers started moving brass model production to Korea. The Korean builders are very good these days, but if you happen to stumble across a model from this time period, when they were on their way up the learning curve, your life will become interesting. Look out for Overland Models steamers in green boxes, PFM models made in Korea (the Japanese stuff is fine), and any Korean builder with a name that sounds like a Korean car manufacturer. Many of those are stinkers! I knew what was up as soon as he produced the box. I thought, "no good deed goes unpunished!" "Didn't you learn about volunteering in the service you dummy?" This early Korean stuff is lousy with bad solder joints. It will often attempt to re-kit itself as you work on it. Enough yakking. On to the photos and the fun! 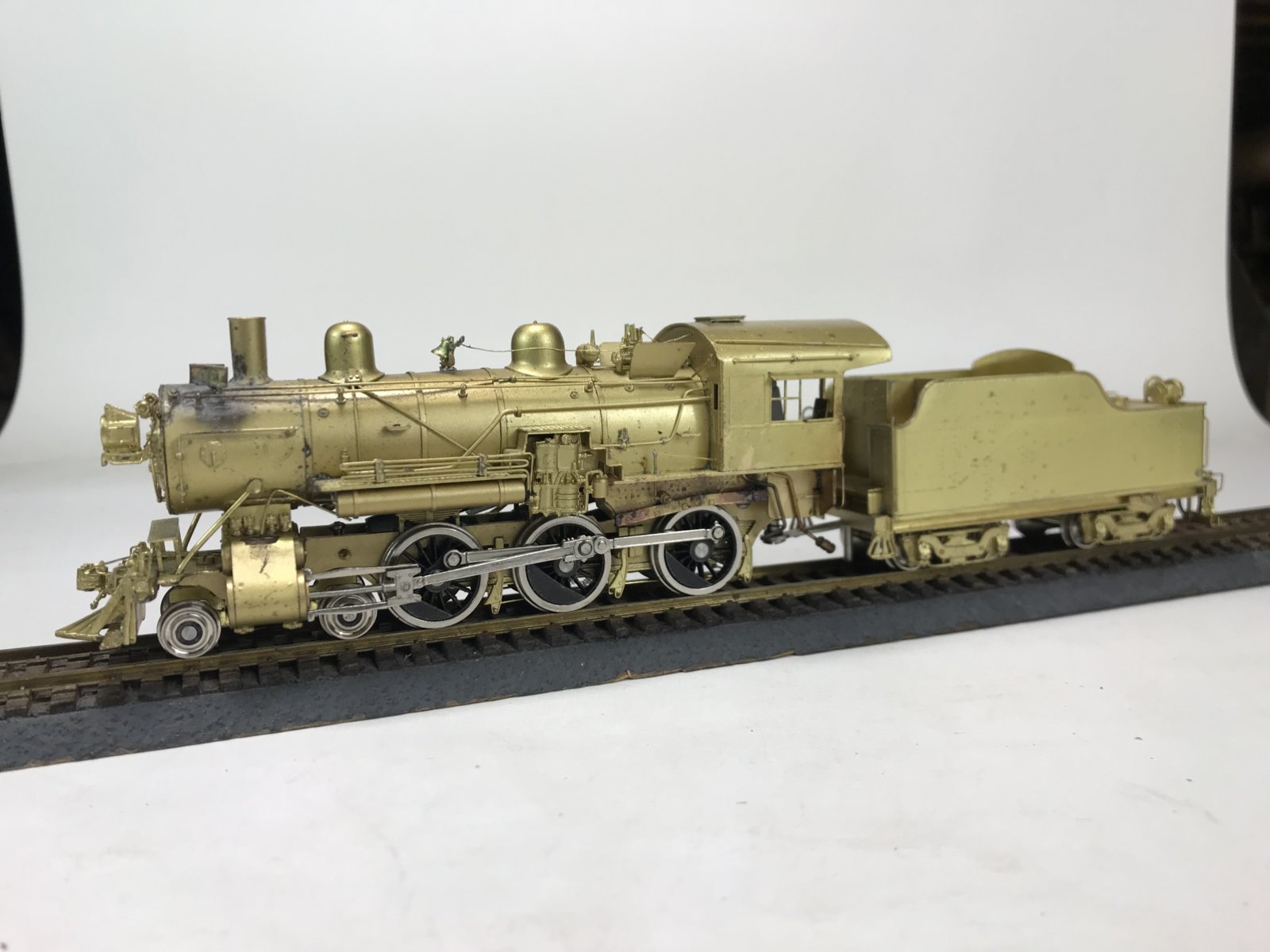 This is actually everything done, but note the discoloration at the stack. This is what happens when the parts don't get rinsed in a wash to remove the acid flux. 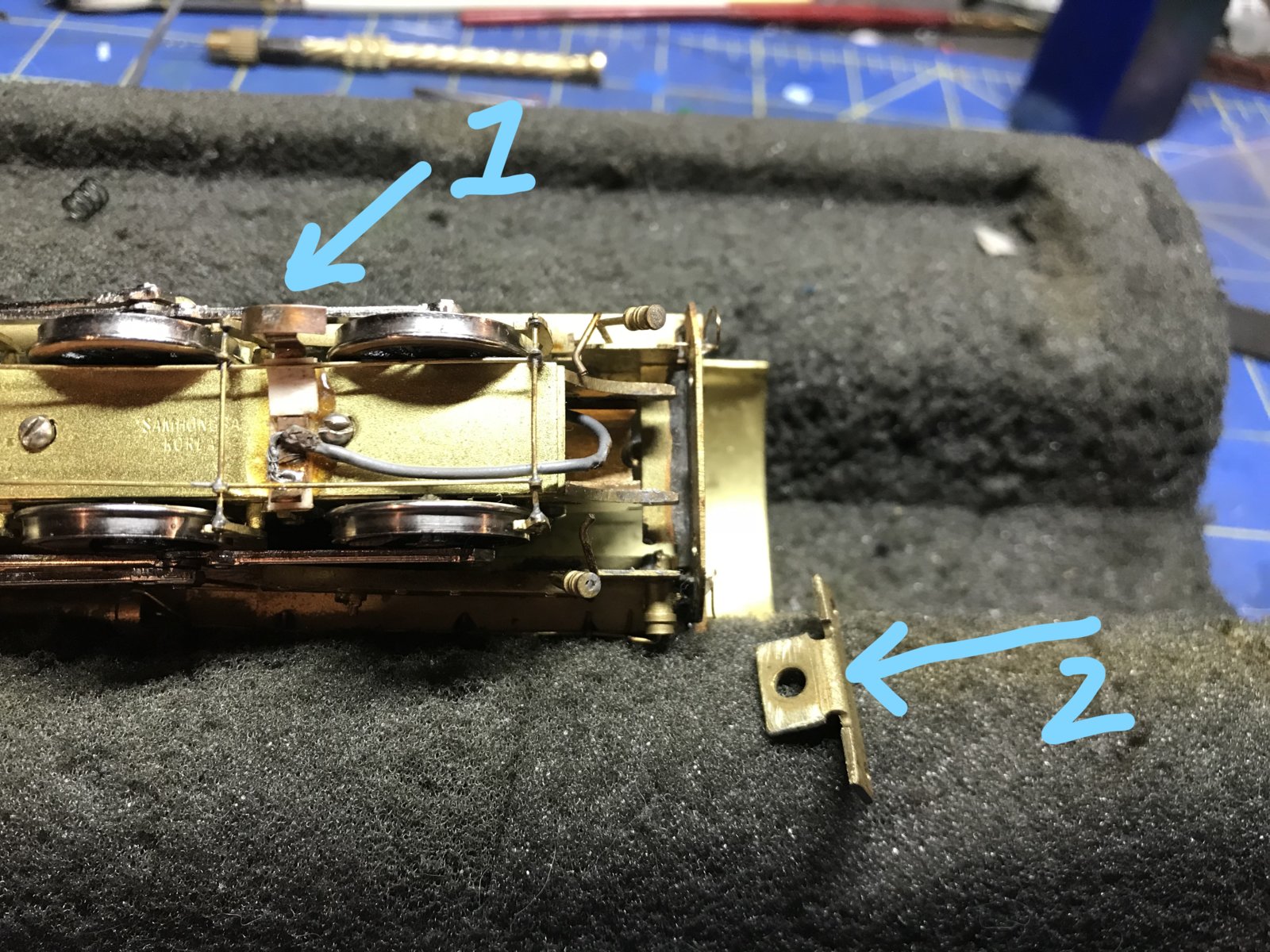 This is the worst of the problems. The rear frame cross member fell off due to cold joints (#2). The previous owner or someone he knew tried to fix it by making the drawbar a mechanical connection only, and installing a wiper for power pickup (#1) These wipers are to supplement power pickup, not to replace the tender, so power pickup was, shall we say, crappy? The cross member is shown cleaned up and ready to be reattached. I had no jig for this, so I had to screw everything back together and position it by hand. 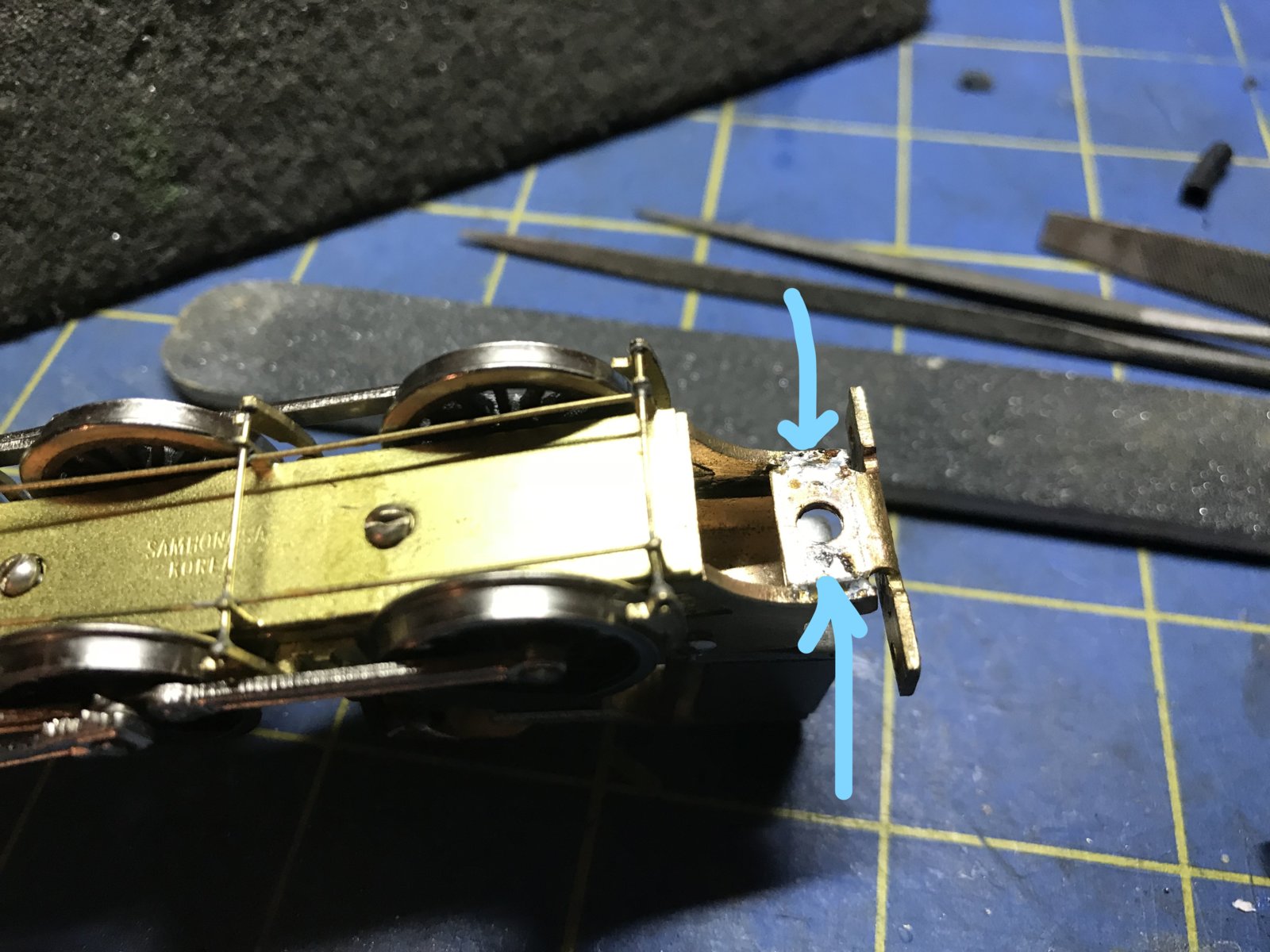 The soldering tweezers made short work of the repair, and everything now fits. Then the re-kitting process began! 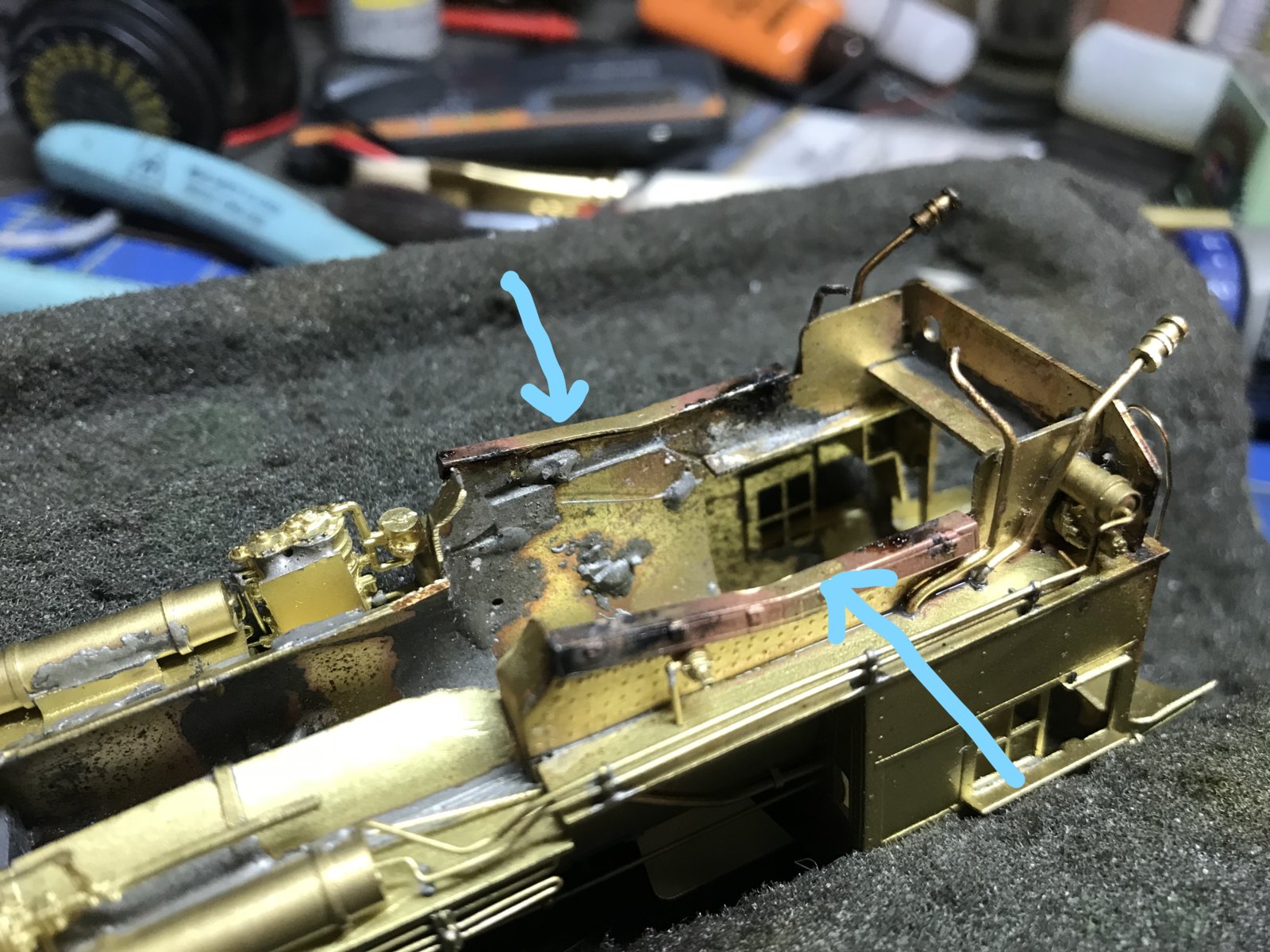 While test fitting and removing a little material for a smoother fit of the chassis into the boiler, both ash pans fell off. They were a simple enough fix. Soldering tweezers to the rescue! Look at the general quality of the solder work on this model. Yuck! After re-attaching them I found out that this model is a convertible. It came as an oil burner, but had ash pans in the box, as well as a tender slope sheet if you wanted to do a coal version of the engine. Since I had already attached the ash pans, I removed the oil bunker and installed the tender slope sheet. Screwdriver work there, no biggie. I also restored the electrical function to the drawbar as built. There are some loose pipes that need soldered into place and whatever else falls off if I do anything else. It is alive!

Staff member
So many questions!
Are you going to paint the model too?
What if he did not want the oil bunker removed?
Looks like 12 gauge wire on the pickup slide?
Why do NP steam have the off center headlamp?(always looked strange to me)
E

Sirfoldalot said:
So many questions!
Are you going to paint the model too?
Click to expand...

That depends Sherrel. He mentioned that, but as this is a museum, and a small outfit, I have an idea I may be asked to donate my time and efforts. I don't get much modeling time what with my job and all. I would expect to be compensated. OTOH I may be feeling generous when the subject comes up. I don't know at the moment!

Sirfoldalot said:
What if he did not want the oil bunker removed?

That's just screwdriver work, but someone had already attached the ash pans, and you have either ash pans and a coal tender, or an oil bunker and no ash pans. I just completed the conversion. That's why I don't especially like convertible models. There is always some compromise. The plumbing is never right for either one, and you have to change other things if you want an accurate model. Many may not care, but I'm fussy that way!

Sirfoldalot said:
Looks like 12 gauge wire on the pickup slide?

That's gone. I trashed it when I restored the tender connection. whoever did it didn't bother to clean the brass before epoxying the thing into place and it basically fell off during handling.

Sirfoldalot said:
Why do NP steam have the off center headlamp?(always looked strange to me)

No clue! That would be a question for Mark (NP2626). I posted the "finished" photo over on one of his threads, as I though he might like it, but we had a bit of a disagreement some time back and I think I'm on his ignore list. I noticed he hasn't posted in a couple of weeks, so he's probably doing summer stuff.
Click to expand...

well, little by little.... no sense rushing it ...
how long did it stay a 'display queen' before this ... ah.. venture ??
it will still be better than when you started, at this point, lol

Alan, you are a Gentleman and a Scholar!! Your knowledge alone is worth a fortune when it comes to this re-build. Great job as always.

I have helped people out with model railroad related stuff without even considering compensation. Now if they wanted me to build an entire layout for them while they went about their daily business without helping, yeah, I would bring up a salary schedule. The closest I came to that divide was back in the late 80s when a friend asked me to build 15 DCC decoders from kits. I assembled them all and kept a couple for myself. They are still in service.
E

D&J RailRoad said:
I have helped people out with model railroad related stuff without even considering compensation. Now if they wanted me to build an entire layout for them while they went about their daily business without helping, yeah, I would bring up a salary schedule. The closest I came to that divide was back in the late 80s when a friend asked me to build 15 DCC decoders from kits. I assembled them all and kept a couple for myself. They are still in service.
Click to expand...

As have I. This is very specialized work requiring special tools. As it happens the museum insisted on paying my going rate, but we agreed if they wanted it painted, I would knock the fee for this job off of the painting price.
E

Postscript: I delivered the model to the museum. They aren't sure if they will keep it at this point, as there are spots on the layout where the track work is a little sub par, and brass models are very good at finding your track mistakes. It did run well though, and they were quite pleased. Another happy customer!

I love a story with a happy ending! (So much of what I see on TV and at the movies nowadays has the "good guys" losing -- no thanks, I get enough of that in real life...)
You must log in or register to reply here.
Share:
Facebook Twitter Reddit Pinterest Tumblr WhatsApp Email Link