What Neat is Your Under-Layout Wiring?

Some times when I go under the layout I look at sections of the under-layout wiring that appears to be a rat's nest of different sizes and colors of wires. Many wires lead to switch machines or terminals that feed some electrical features. I just shake my head in wonder. Complicating the issue is that I installed separate power supplies for switch machines (Tortoise) 6 volts, incandescent lighting (<10 volts), LED lighting, signaling and DCC. Each power supply has a separate buss line wiring that runs the entire length of the layout.

Each of the power supply busses are connected to mini-toggle switches at a Master Control Panel where I can turn the power on or off for all of the electrical supply, except DCC which is always on, but DCC can be turned off at the 12 volt transformer that powers the DCC system. As an example, I can turn off everything except DCC when running trains and forgot the lighting effects or operating turnouts.

Should a problem arise, I just only leave on the buss wiring that powers the effected electric portion or element of the layout. I then use a multimeter to trace the wiring from the earnest electrical terminal to the affect component. I tried to wire each electrical component, be it a signal, turnout or lighting from a terminal strip. I added a second set of operating crossing signals near the Pine River Yard where was an existing opersating signal. Using the approach above I could easily find the correct terminal screws for the signal wiring.

I attempted to make the wiring as neat as possible,but wires do crisscross over each other and I tried to use a color coding system that was abandoned early in the wiring stages. I also wanted to label the wiring.

While it appears that there's no logic or reason for the wiring, once you take time to study how its wired it makes some sense. But, not as neat or organized as I would like it to be.

I've started to mark the terminal strips with a label maker to help in trouble shooting.

I've seen some layouts that are a masterpiece of professional wire installation and perfect wiring of the control panels, color coded wires and labeling.

Okay, how neat is your under-layout wiring and did you follow any particular planning or scheme? 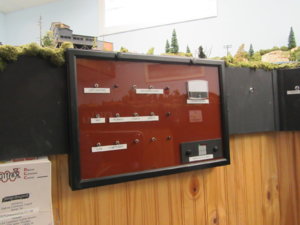 The Master Control Panel with a volt meter for incandescent lighting and a Ramp Meter for the DCC track voltage and Amperage. LED's indicate when certain power is on. The Lexan front panel is mounted on hinges and is opened by lowering the face panel. 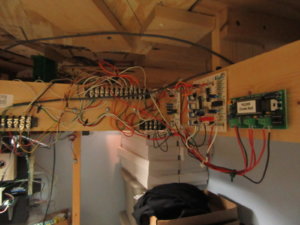 Under-layout wiring for the crossing signal and the crossing detection circuits, bell ringer and flasher circuits. The terminals may also feed other electrical on the layout. 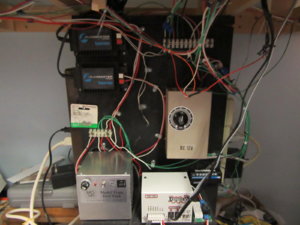 Main electrical supply. Some transformers are hidden behind the panel. Everything plugs into power strips and the layout room's electrical and lighting is controlled by a single circuit breaker.

Like you, I always tried to be neat and logical in my wiring, but strayed in some situations. As a DC user, there is a buss wire (18 gauge) to each block, 40 or so, but the wires are bundled along the same route until they have to split for their blocks. There is only one (-) buss that connects with all sections so that makes that part easier. I use terminal blocks locally to connect to multiple locations in a block, nearly every piece of track has feeders attached. 95% are black or red wires depending on whether they are (+) or (-). All track power is on when I operate unless I am parking a train on it; i.e. staging yard or passing siding overnight. The three staging yards are all on one block each, with Atlas Selectors controlling which track is powered/unpowered. Many but not all terminal blocks are labeled, and many have spare terminals that are to be used for structure/accessory lighting. Since I use ground throws for the most part, I do not have to worry about switch wiring. There is a 12v buss that runs the length of the layout that powers all 12 powered switches (out of 115 total). The actuators are in the fascia adjacent to their locations, so that wiring distance is short and direct. I do not have a signaling system since I am the only one running the layout and just have no need for it. It would be nice for realism, but it may never happen. About six or seven years ago, I installed walk-around throttle receptacles that use recycled four-conductor telephone cable to carry the signals, so it is neatly inside the covering. They are piggy-backed to one another so there is really only one cable running from control base to the end of the run. I also have a haphazard lighting buss to light up buildings and streetlights, however it is not yet operational and only about 20% of the structures that I installed lights in are currently hooked up. I am rethinking how I want to accomplish this as the 22 gauge speaker wire (free to me) will not be stout enough to power everything, unless I run multiple busses or have localized power supplies.
Despite all of this, it does look like a rat's nest underneath the layout. Complicating things is the fact that I am still in the process of installing lighting under the upper level to assist in seeing stuff underneath that the room lighting doesn't adequately illuminate.
All of this said and done, I was always careful in running wire and making hookups, previous layouts taught me something. I haven't had any disruptions or had to troubleshoot anything except for one small section of an industry spur where I inadvertently snagged a wire and didn't realize it until a few days later. I still wish that it could look more professional.
T

Murphy's 17th Law of Wiring states that no matter how carefully and logically complex wiring is done, eventually you will wind up with a rat's nest! Even a allegedly professional aerospace company is now being found to have potential problems with the wiring in some aircraft!

I worked for a commercial and industrial air conditioning company when we lived in Arizona. One of the owners was fanatical about ANY wiring! He wanted it to be neat and orderly and clearly identified. Most wiring for a control cabinet was generally the same color..........black. But when he was done wiring a project, it looked like a piece of art! There could be thousands of wires (there were literally hundreds in most) but they were ALL clearly marked and VERY neatly run. Tracing a wire was made easy because of the care he put into the initial install.

You can get tablets from electrical supply houses that have stickers with numbers and letters that you put around the wires at each of their terminus. With a log of what number or letter wire a wire is for and its location on your layout, you can make trouble shooting much easier. When I get mine started, I plan on following his example as much as I possibly can. Yes, you WILL use more wire, but not that much more and it WILL be well worth it. Just think about how much you hate to have to crawl under your layout and do the wiring now. Well, ain't none of us getting younger and what makes perfect sense now will often times be baffling several years from now when you try to figure out exactly what it was that you did to hook something up. A little extra time spent now doing a neat job and documenting things will make life a LOT simpler later on!

Greg: Looking at what you have for wiring has given me some insight into how I want my wiring to look...now to make it happen.

Here is the wiring in the central portion of my small N-scale layout. It's not as neat as it could be, but everything is carefully color coded.

In this crowded central portion of the layout, feeders are connected to the main bus at the large Track Power Distribution terminal strip. Elsewhere around the layout, I connect feeders to the bus wires with 3M Scotchlok IDCs (Insulation Displacement Connectors, a.k.a "suitcase" connectors). It is essential to select an IDC connector that exactly matches the two types and sizes of the wires you are connecting. 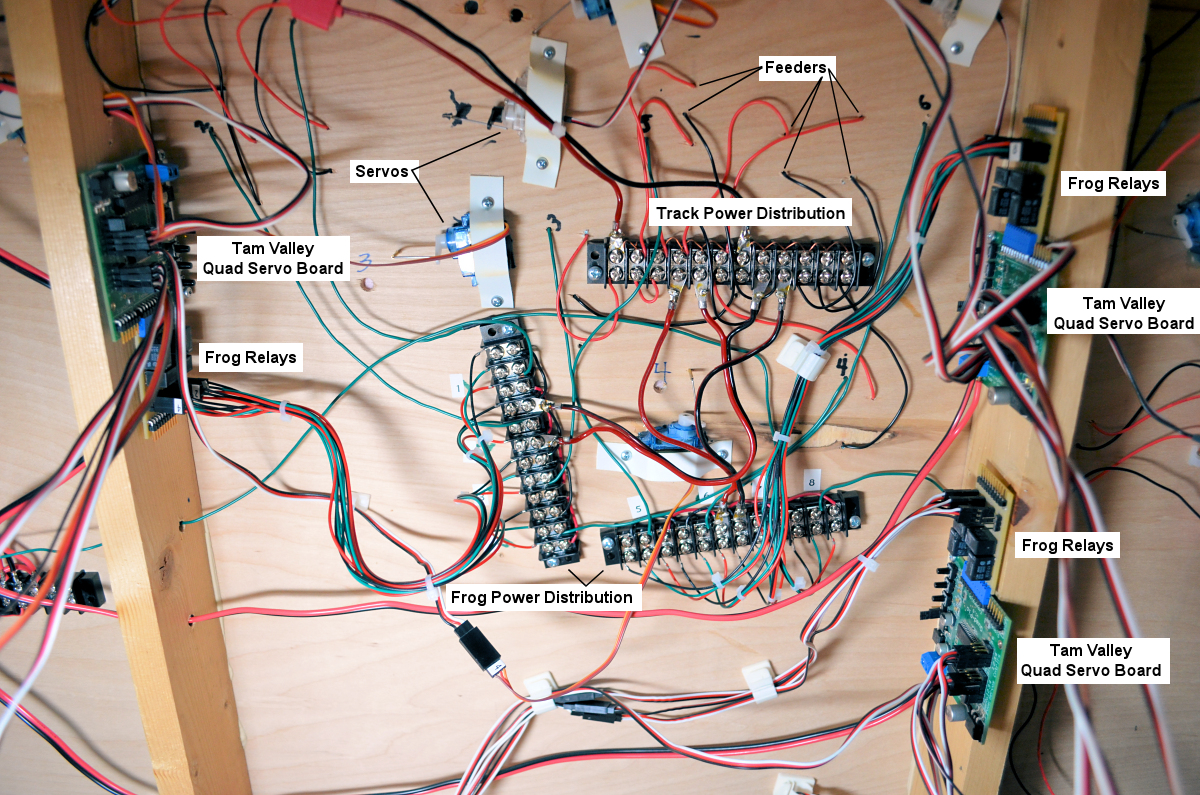 mine is quite a bit simpler, lol
just the DCC bus wires on switches, and small drop wires ... nothing else at all ..

I try to keep the visible wiring neat and orderly. Behind the benchwork though, I just run the wiring from point to point.
I use Homasote board to mount electronic boards and drill holes through the board to bring the wires out to the attachment points. 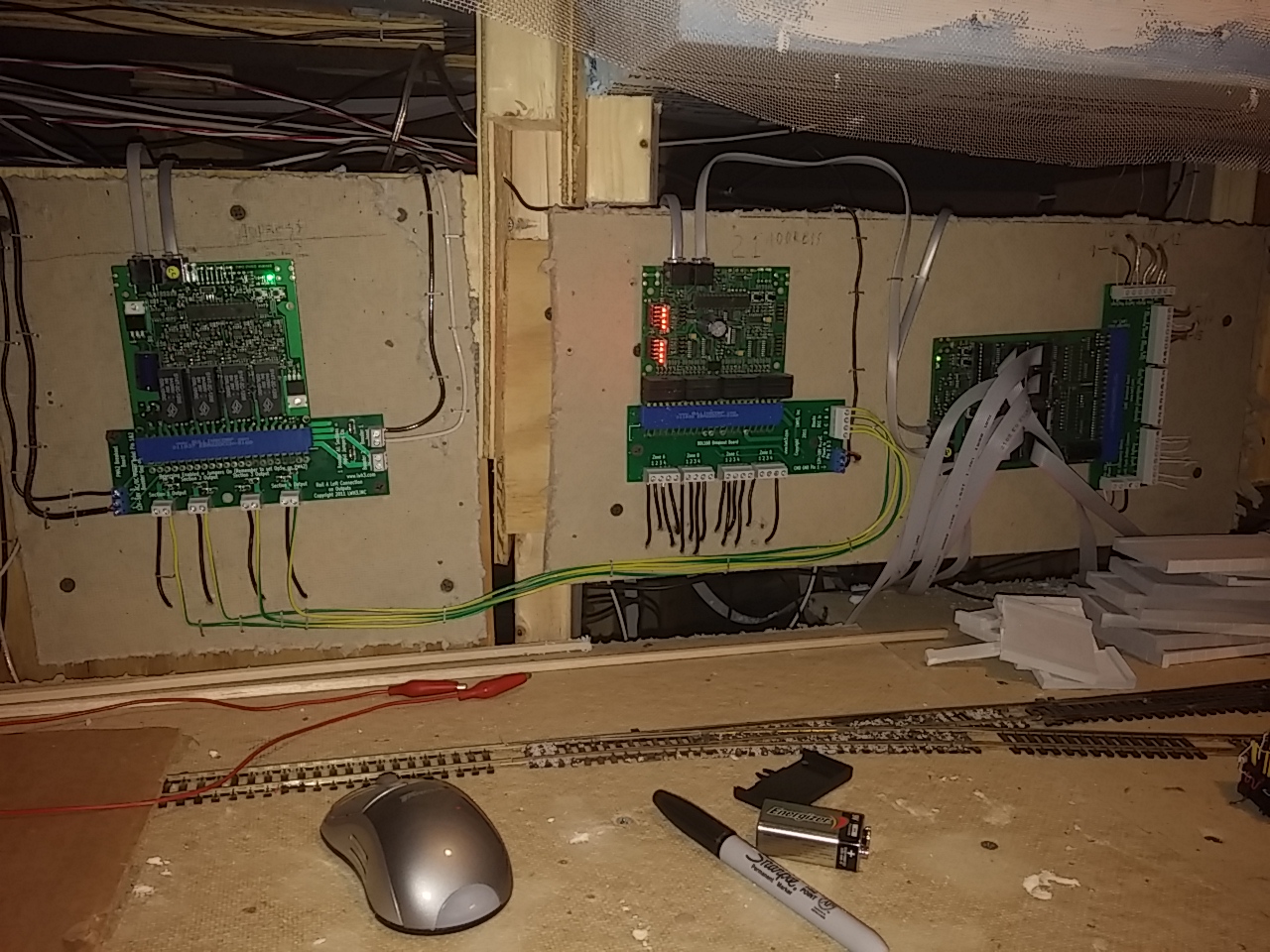 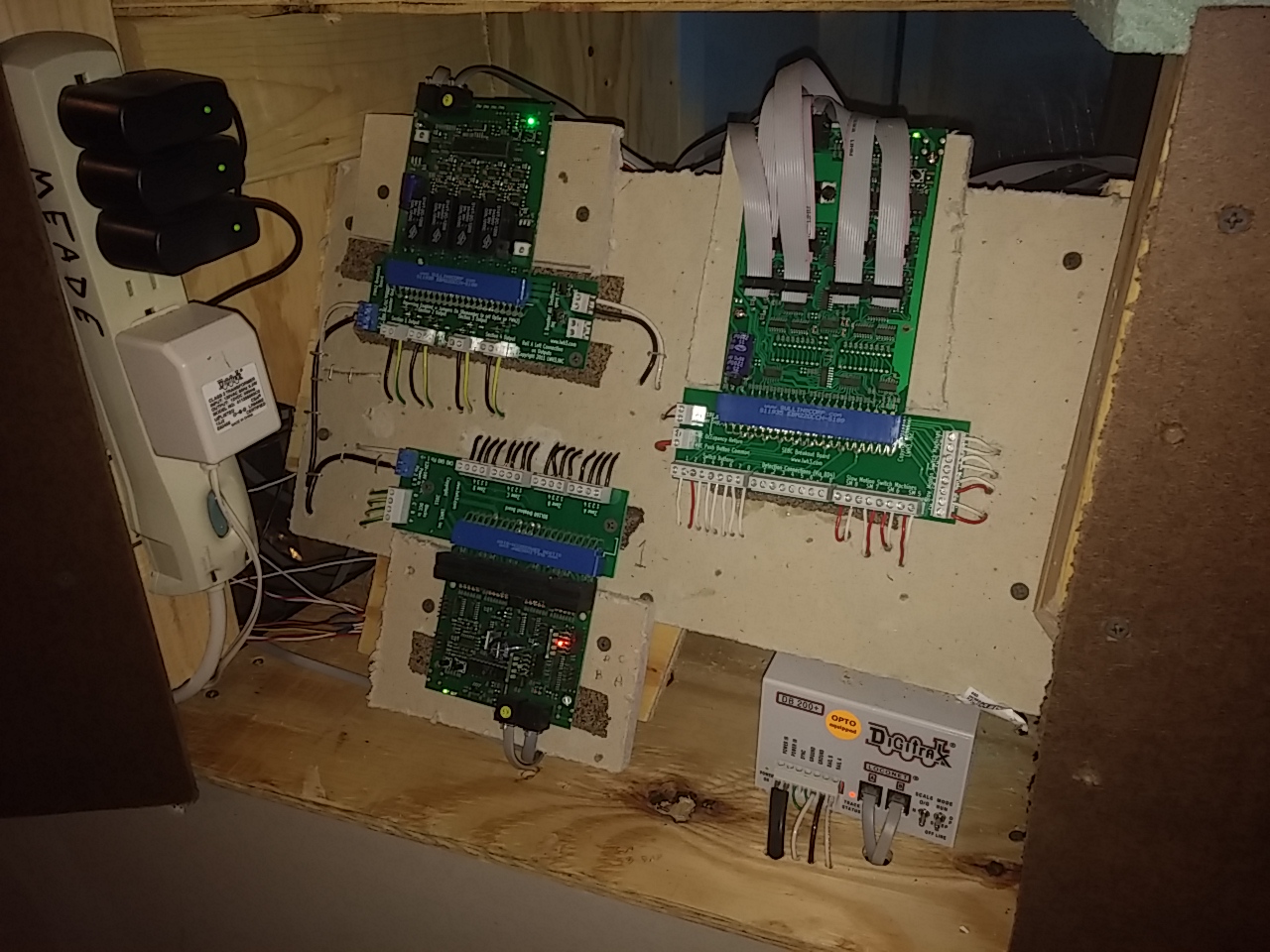 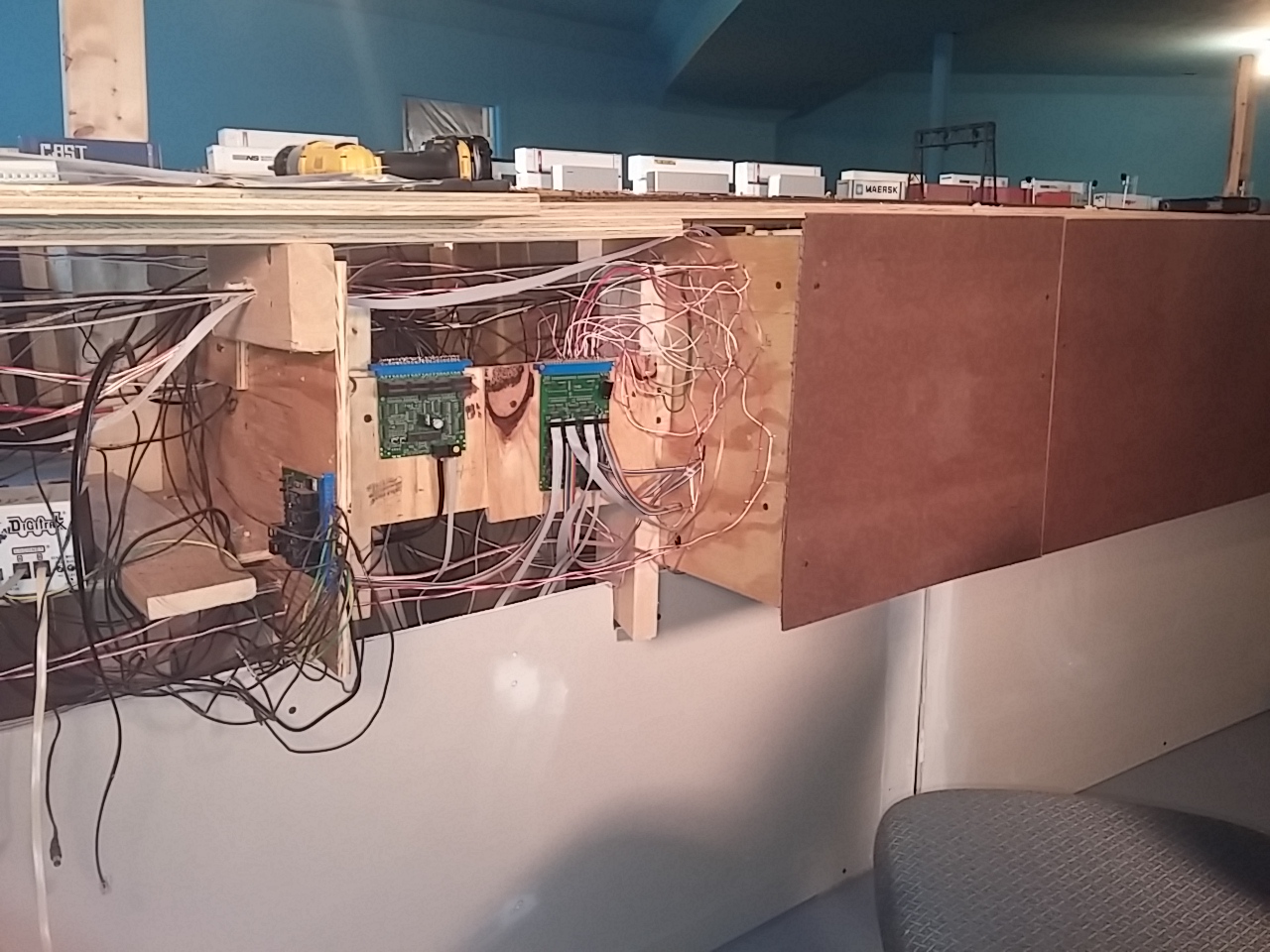