I don't model in N scale, but someone over at the Model Railroader forum asked how to model track in pavement in N scale without the unsightly gaps needed for the flangeway. I came up with the following and I thought I'd share it here.

I modeled the pavement using paper with the concrete texture printed onto it. The paper is shimmed up using poster board. The poster board between the tracks has to be narrow enough to allow for the flanges, but the paper can go the full width of the track. Note that in the pic below I trimmed the pavement a little too narrow (you can see the edge of it.) Ideally it should be wide enough to tuck under the rail head on both sides. The paper will give way as the wheel passes by and then bounce back.

For turnouts the paper needs to move with the points. The only thing I could really think of is to use two pieces, one between the closure rails and one between the points. Make sure there's a bit of overlap. You could try to disguise the joint by making it look like a seam in the pavement.

I created the concrete texture using the free 3D program Blender. I downloaded one of the existing concrete materials at the Blender Material Repository and modified it a bit to be a little more tan than gray. Be sure to use some normal mapping (a.k.a. bump mapping) to give it some 3D texture.
In Blender I created a cube, scaled the thickness down to a thin slab and beveled the edges a bit to create the seams. I duplicated the cube to make nine of them and narrowed the center three. I placed the camera directly above these looking straight down. I added a sun light and angled it a bit to accentuate the seams and bump mapping. Then I rendered an image of it. You'll want a fairly large image because it's better to have to downsize an image than upsize it.

I did all the weathering using Photoshop Elements (GIMP or Paint.net would work just as well.) Cracks can be created by adding a new layer on top of the concrete image. Draw some thin cracks with the brush set to one or two pixels. Than apply the Emboss filter to this layer to give it a 3D effect. Set the Height value pretty low and the Amount value pretty high. Adjust the angle of the light source to match the lighting on the original image. Then set the layer's merge mode to either Overlay or Hard Light to allow the background layer to show through. Adjust the Opacity as needed.

Sizing the image for printing can be trial and error. Use the Grid feature in your paint program to create a grid with 9mm spacing and adjust the size of the image so the center portion of the pavement is 9mm wide. Printers, however, don't always print out at a true 1:1 ratio, so it might take a few tries.
I printed this out onto white typing paper, but you could always use art paper that has a different color and texture to it. Just make sure it's not too thick for your printer.

If anyone uses this, please post some pics of it. I'd love to see it in action.

Sounds like a good way to do it! Your pics don't work, though. (Or is it just me?)
J

No pictures on my screen

Hmmm. Not sure why they're not showing. They show up just fine for me. Here are the direct links.

Looks like the pics are hosted on nscale.net, and they probably don't load for anyone who's not registered there. The IMG codes work though! 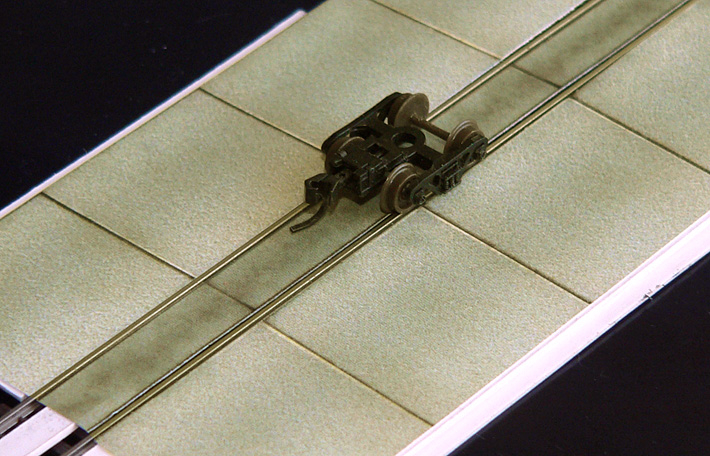 RW&C said:
Looks like the pics are hosted on nscale.net, and they probably don't load for anyone who's not registered there. The IMG codes work though.
Click to expand...

Thanks for posting it. I know what happened. I just Copy/Pasted the original post I made at Nscale.net, including the photos. I assumed it would link the photos to Photobucket. I didn't realize they linked back to Nscale.net.

Here's the pic about the turnout. I might pick up one this weekend just to experiment.

A quick update. In my OP, I trimmed the center piece a bit too narrow so I gave it another try. A perfect fit allows the paper to stay in place without any shimming. Pressing against the web of the rail is enough to hold it in place.

I also updated the texture. I downloaded some concrete textures and used them to enhance the original texture that I made in Blender. I loaded the concrete photos into new layers and used various merge modes (Overlay, Hard Light, and Luminance.) You may need to adjust the Levels and Opacity of these layers to keep everything within the same tonal range.
I also used the Emboss filter to paint in some chips along the edges of the center piece. 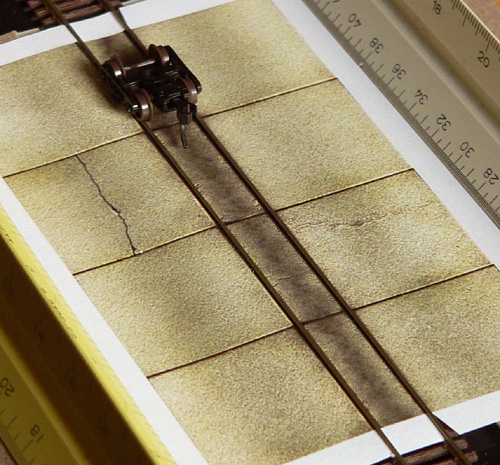