I've added a site about my Track Cleaning Transfer Caboose to my homepage, with video. 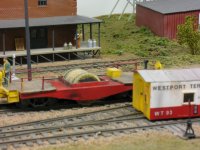 ok I give. It is obviously picking up something. I see no fluid so is it abrasive?

You know as I start back into this hobby I was wondering what exactly is the best way to clean your track. So what is everyone's preference and why?

I use a Center Line car, with Goo-gone on a rag.

Can you help me out with a site on the centerline, Josh? I found their site but it seems to be old and prices out of date. Are they still in business? Didnt see anything on ebay. Thanks.

I use the caboose with the tank in it and adjusting valves to clean my track. But with 8.8 miles of track it goes thru pads like you wouldnt believe. An eraser works great but I cant stand getting the rubbings up.

Anyone else have anything they use that really works?

There's quite a few on Walthers now, including ones built into a locomotive chassis.

As for centerline, I dunno, I'd assume they're still around. http://www.centerline-products.com/
Three of their cleaners just sold on eBay, around $20 a piece. the only inherent problem with them would be the rag unraveling and the brass roller grounding out.
H

I use the Aztec cars, one with a scrubby roller, and one with the wipe. I actually need a third one, also with a wipe, so the other wipe one can be loaded with goo-gone, while the last one has Alky to take up the residue...

As I mentioned before on B_Kosanda's post on Speaker Magnet Mystery that he post a week or so ago...

The Annihilator is one of the meanest weapons in Aztec's arsenal of HO cleaning products to fight the war on dirty track. This car was not built to look utilitarian but as a fashionably functional piece of rolling stock. The custom painted Roundhouse® 40ft gondola is gray with black “M.W.” and dimi data. No road or end numbers are provided. The modeler may apply decals (not included) in the railroad of his choice. To finish off the car the hobbyist might want to cover the mechanism with a piece of cloth (not supplied) to simulate a tarp.

The Annihilator was engineered for ease of use and minimal maintenance. It can be run in a train and go unnoticed without hitting scenery or derailing.

A hard black anodized aluminum chassis holding two free rolling canvas (Sidewinder™) rollers at a slight angle to the railhead, a magnet and a fluid reservoir (1/2 oz. capacity) is housed in a Roundhouse® 40 ft gondola equipped with Kadee® couplers.

There is a valve to regulate the amount of cleaning fluid dispensed to the front roller. The rear roller is run dry and mops up loosened grime. A clear plastic lid covers the reservoir allowing you to see when it is running out of fluid. Turn valve about one quarter turn for ten seconds or so. Turn off and run for 10 to 15 minutes (or change times to suit).

This stealthy lightweight tips the scales at a mere 7-3/4 ounces soaking wet. The Annihilator will clean in either direction but works best with the magnet to the rear.

To read a review on
The Annihilator click here.


DCC Kit for the Annihilator™

This kit replaces the Annihilator's manually-operated metering valve with a solenoid whch is controlled using a DCC decoder (not included).

With the kit installed you no longer have to stop the car to moisten the roller. Just call up the car’s address, push the F2 function button for a few seconds, and the roller is wet again.

Works only with “The Annihilator” track cleaner purchased after August 2004.

I've seen the rig at the NMRA Train Shows. It's pretty impressive, and I like the DCC metering system, especially for my alky rollers. Those tend to evaporate quickly and dry out, while the Goo Gone one sticks around longer.

Unfortunately, it's a pricey item, and I haven't sprung for one yet....