Hey all, turns out my 2 year old loves trains! So my wife and I decided this was finally the year to do our N scale Christmas train layout. Now I wanted to come up with something that allowed me to use it as a small passenger car layout (think Bachmann Liberty Bell Special) during the Christmas season, but also provide enough operational interest to allow me to run it as a semi-permanent layout the rest of the year. I decided on 30" x 72" for the benchwork as I felt that was an easily manageable size for us. I sat down to do some planning, and attached is my first attempt.

It will be an over-under figure eight, minimum radius is 13" on the main lines with a grade to the top of (gasp!) 3.8%. Since I don't plan on running any trains of more than about 5 cars I don't think it will be much of an issue with the motive power I plan to use. I wanted to include a reversing section as well as a mainline crossover, and I think I managed to pack everything in pretty nicely to provide enough room for some nice scenery in addition to three small industry options and a two-train staging area near the bottom. Let me know what you guys think, always interested in feeback! 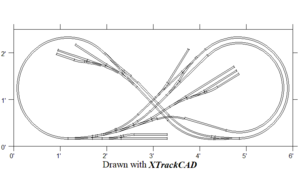 Staff member
The grade will depend on where you start it from. Obviously the double track is over the yard's throat, so start that upward grade just after it leaves the right hand end. You may need to put a bit more gap between the rails around the curve to allow for the embankment the outer rail is climbing up.

At the left side, you can start the down grade as soon as you leave the turnout to the yard at the top, maybe move that yard entry closer to the overpass to increase the mainline's length just there. The bridge over the lower yard can have a buttress end support close to the yard rails.
P

actually the yard is going to be on top I had planned to start the grade at either end of the double track, right after the turnouts. I originally wanted the yard on the bottom, but then I thought it would be more interesting to put it on top so I could see it better. Sorry should have included the elevation points. The uphill grade will end at the end of each curved section, and the entire yard will be on the top, including the bottom two yard tracks. The reversing loop will all be on the top level as well. My CAD software shows a 3.8% grade with a maximum elevation of 1.8", which I think should be plenty for what I'm trying to do in N scale. I'm a bit worried about maximum clearances, but I don't plan to run any modern equipment so I think I'll be okay.
P

The little yard in the top left will be at ground level on the layout, should have mentioned that as well. Geez I can't think straight with trains on the mind...

psychobeagle12 said:
Let me know what you guys think, always interested in feeback.

The little yard in the top left will be at ground level on the layout, should have mentioned that as well. Geez I can't think straight with trains on the mind...
Click to expand...

Is the area in the center left space left for a Christmas tree? You could flip all of that to the other side the track. Into the triangle area there leaving the one loop totally devoid of track for Christmas duty. If not that little yard could be connected to the main further back and the tracks made longer into that area. As it stands now the capacity of the two parallel tracks looks to be only 3 cars, or is that supposed to be locomotive storage? I usually try to avoid the expense of a turnout if it is a net gain of only a couple cars.
P

I actually haven't decided on industries yet, though I guess I probably should. We are going to put the tree up separate from the layout this year, so that empty space was going to be mostly mountain scenery. I was definitely thinking of connecting that yard to the main further down to extend space, so that's probably one mod I am going to make, and I'll just sacrifice a bit of scenery.

A brief note about kids and trains ...
When my nephew was small, he loved trains, too. So my Dad and brother built him a small N-scale layout for Christmas. They quickly discovered that my nephew loved the trains but didn't much care for passively watching them circulate around the layout. He wanted to get his hands on them! Since he did not have the dexterity to place N-scale rolling stock on the rails, he ended up playing with the trains on the floor. He wasn't really interested in the layout at all!

So I have considered this lol. I have Lionel stuff in the attic for him to play with now. The N scale layout... yeah it's more for me than for him. He is absolutely enamored with watching the trains go around right now, and if he gets bored, dad will take over and do some operations lol. But I understand it's a consideration that should be made before deciding to embark on a project like this one.

Staff member
Any updates on your layout?
P

Not much to say really at the moment. Went and got a few pieces of flex track and road bed tonight, need to grab the stuff to make the benchwork. I already have part of the lumber, just need a few pieces of plywood and some pink foam insulation. I'll try to post pics as I build!
P

Kicking around some other track plans. For this plan, the outer track will be at base level and the turnouts that create the reversing loops will be at ground as well. The bridges will be at the second level, around 1.8", and the layout will climb to a third level up to the interchange yard. I like this one for the figure eight and ability to turn trains in both directions, but without an extension I'm afraid it won't be operationally interesting. With the limited space I'm having issues coming up with industries to place and where. I don't just want a bunch of spaghetti to run trains on... thoughts?