The one hour project that wasn't really

Hi all! Been on the road a bunch lately but have had time to do some light projects. I bought this GS-5 model from a fellow on one of the FB brass lists. Nice guy, didn't feel comfortable removing the boiler weight for shipping (which isn't wise but he promised a good packing job and came through, no shipping damage) This one was going to be easy, just upgrade the factory paint a little, pop in a decoder, wire up the lights, and away we go. NOT!!!

When I opened it up, there were a couple of surprises. An old constant lighting/gyra light module, circa 1990's maybe. Nice for the time but useless on a DCC layout. It had to come out. When it came out I discovered half the boiler weight was gone (to make room for the thing). whoever did it also drilled out the holes in the smokebox front to make room for larger bulbs. Why? Who knows! I was doing this stuff in the 90's and there were plenty of small light bulbs out there even then. I used a couple of 12 volt bulbs which are larger and fit in well enough with a little silicone. The missing weight I'll worry about after a performance test. Done yet? Oh no, it gets better! When I tested for continuity I found a lighting module in the tender as well, the diode type that would only allow operation in reverse. Again, useless with DCC. I took that out and the tender light bulb hole had enlarged as well, for no good reason that I can tell. That made it hard to install a lens. Then I found the best part. For some reason the idiot had drilled out the tender kingpin hole and put in a piece of plastic dowel rendering the kingpin electrically dead. This required drilling out the hole a little further, fitting a piece of brass rod into it, soldering that in without damaging factory paint anymore than necessary, then drilling and tapping a hole for the kingpin to return the original current pathway. I still haven't figured out why this was done, but it gave me a fresh contempt for amateurs. Then the less irritating stuff, like decal mistakes, and incorrect old decals. The set that came with the model was OK for what was offered at the time, but there are better decals now, and I wanted it right. Some repainting had to be done, as the decals were very well set, and it was just easier to paint over them. Why is Alan so hot under the collar you may be asking yourself? A couple of reasons. First there are just 100 of these in existence. Its a relatively rare model. You don't take your drill or Dremel to a rare model lightly, and certainly not if you can accomplish what you want to do without cutting things up. Second: I paid a price applicable to a mint condition model. That one stuck in my craw some. This isn't the kind of stuff that shows in photos either. I don't believe the fellow intended to defraud me, I think he bought it this way and didn't know any better. Caveat Emptor. It happens. I managed to fix everything. It's cosmetically intact, and runs very well. We'll see how the smaller boiler weight effects pulling power. Anyhow, here she is, a Westside GS-5. I upgraded the as sold paint job, the decals, and fixed the screw ups. The 5 was the last one I needed for the collection. How to tell a 5 from a 4? look for the roller bearing caps on the trailing truck and tender trucks, and the roller bearing symbols on the drivers. No sound in this one. I have two 4's and a 2 with sound. The non sound DCC and light package didn't require any modifications to the model's structure. 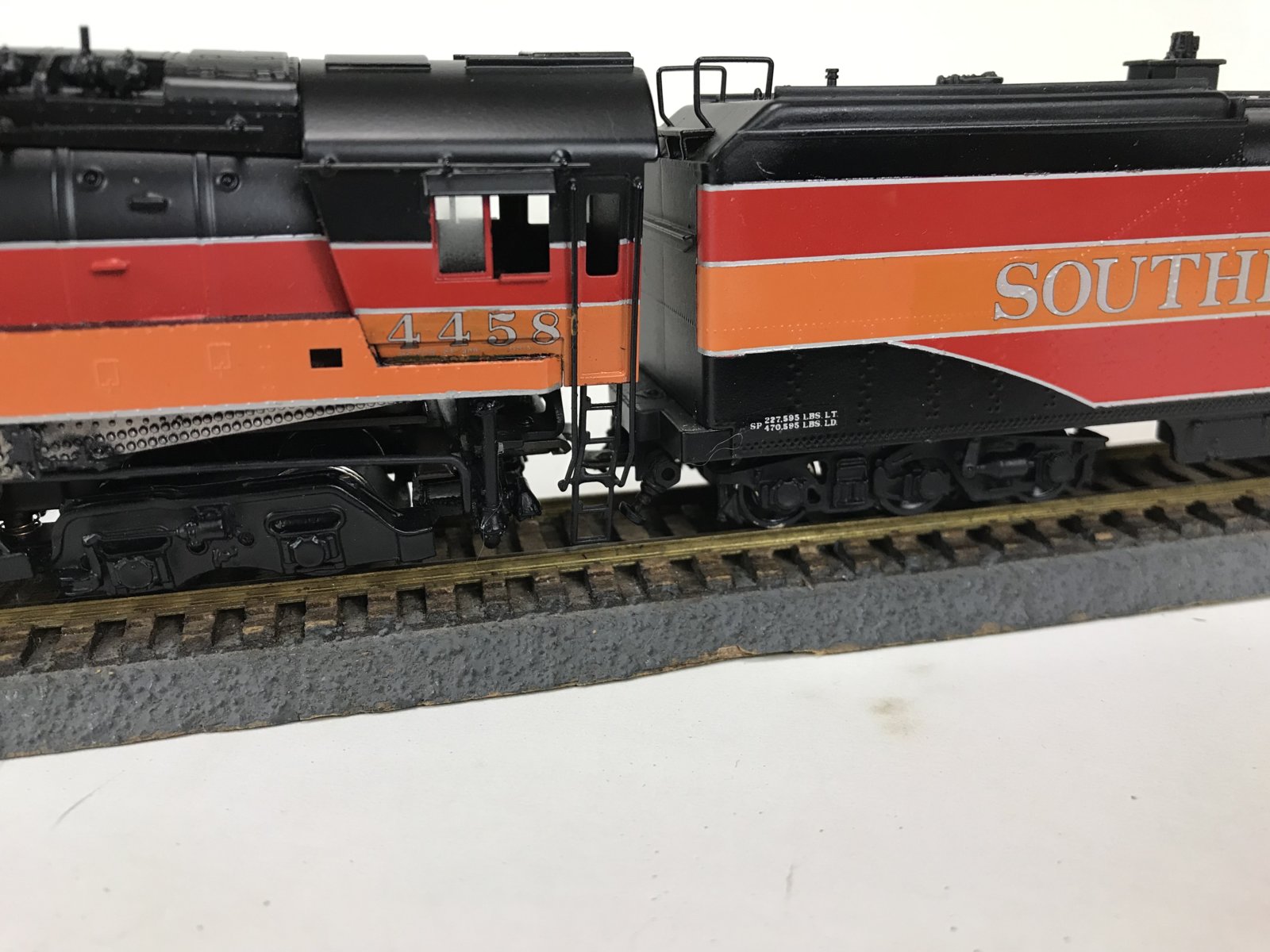 Alan, but as always, you will make her right again.

Couldn’t give up on it! Spent too much money on the blasted thing. It was meant as sort of an object lesson. Even when things look really good they aren’t always. With so much common brass showing up on the market at such cheap prices it seemed like a good idea to do a series of threads on what can be done with it, and pros & cons. And to point out that even the gurus get caught by surprise now & then.

i will admit the last couple of years a lot off
brass has been.dumped on ebay for super rick bottom pricing.
remember when brass was u untouchable, im tempted to grab a AC-9 but still not xheap enough lol
You must log in or register to reply here.
Share:
Facebook Twitter Reddit Pinterest Tumblr WhatsApp Email Link