Kevin, thank you. I've enjoyed doing these Geeps up. A nice break from switchers for a change.

GP60s are awesome looking locomotives, that bigger dynamic brake hatch gives them a real tough appearance. Does the A&P have any in their fleet?

GP60s are awesome looking locomotives, that bigger dynamic brake hatch gives them a real tough appearance. Does the A&P have any in their fleet?
Click to expand... 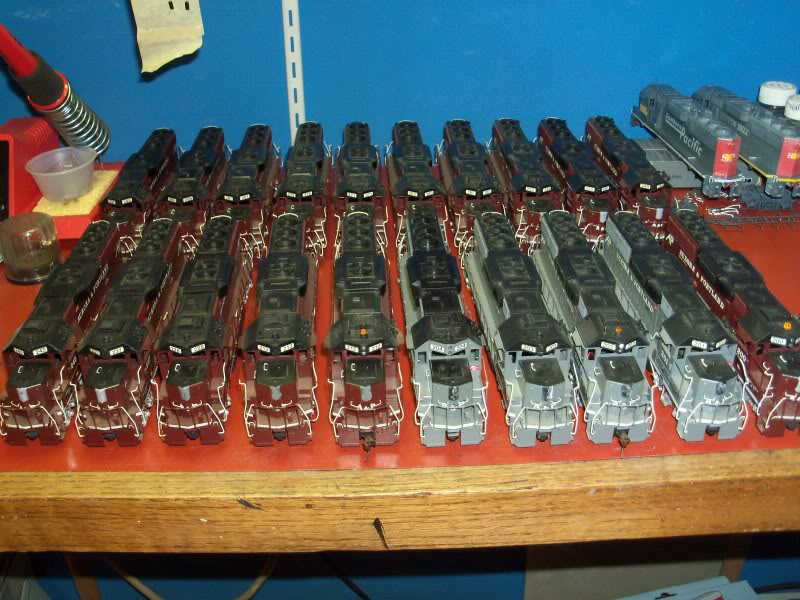 I've got to finish them up sometime soon. I've changed the front lighting arrangement some so I have to go back and redo the paint on the nose. Then add final details on the pilots (plows, MU hoses, air hoses, spare couplers, etc.) The GP0's are going to be used in sets of 4, for the container trains. The series is 200's for GP60's on the A&P roster.

Here's a good side shot to show the different paint schemes for them. The grey ones actually have 2 decals applied to them. First a black, then a white a little off to the side. Gave them a nice shadow affect I think. 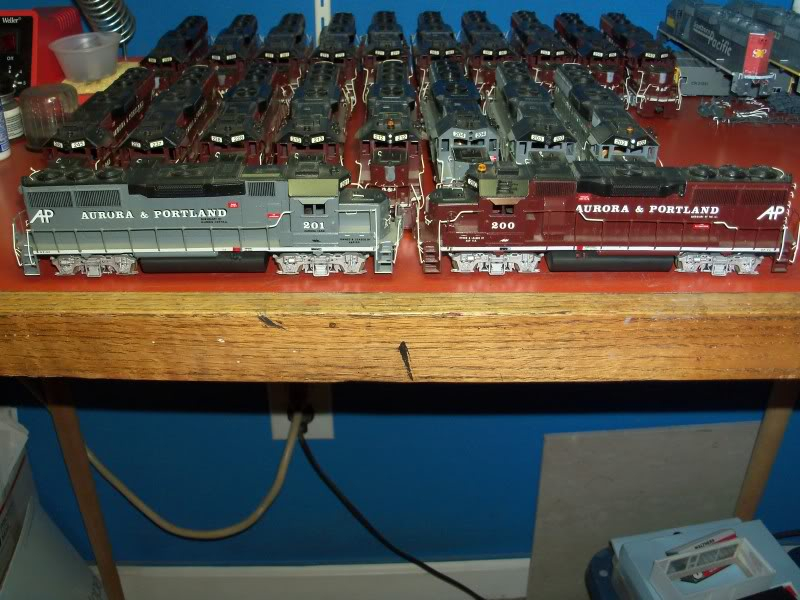 Very nice! Can we get a close up of the lettering on the grey unit?

Rico said:
Very nice! Can we get a close up of the lettering on the grey unit?
Click to expand... 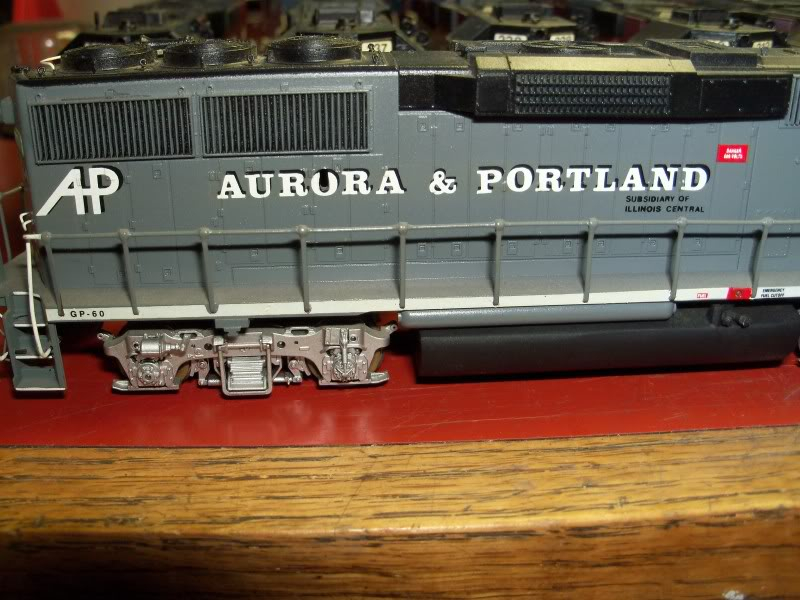 I really like the grey unit as well. I wouldn't mind riding that unit on the point

OK, reviving another old thread. I see all of my old photos are messed up by Crap-bucket, so I'll load some new ones of what I've been working on today. 2 more old SP patch jobs, and a UP one I'll be doing for my wife.

First the original 5 UP jobs. 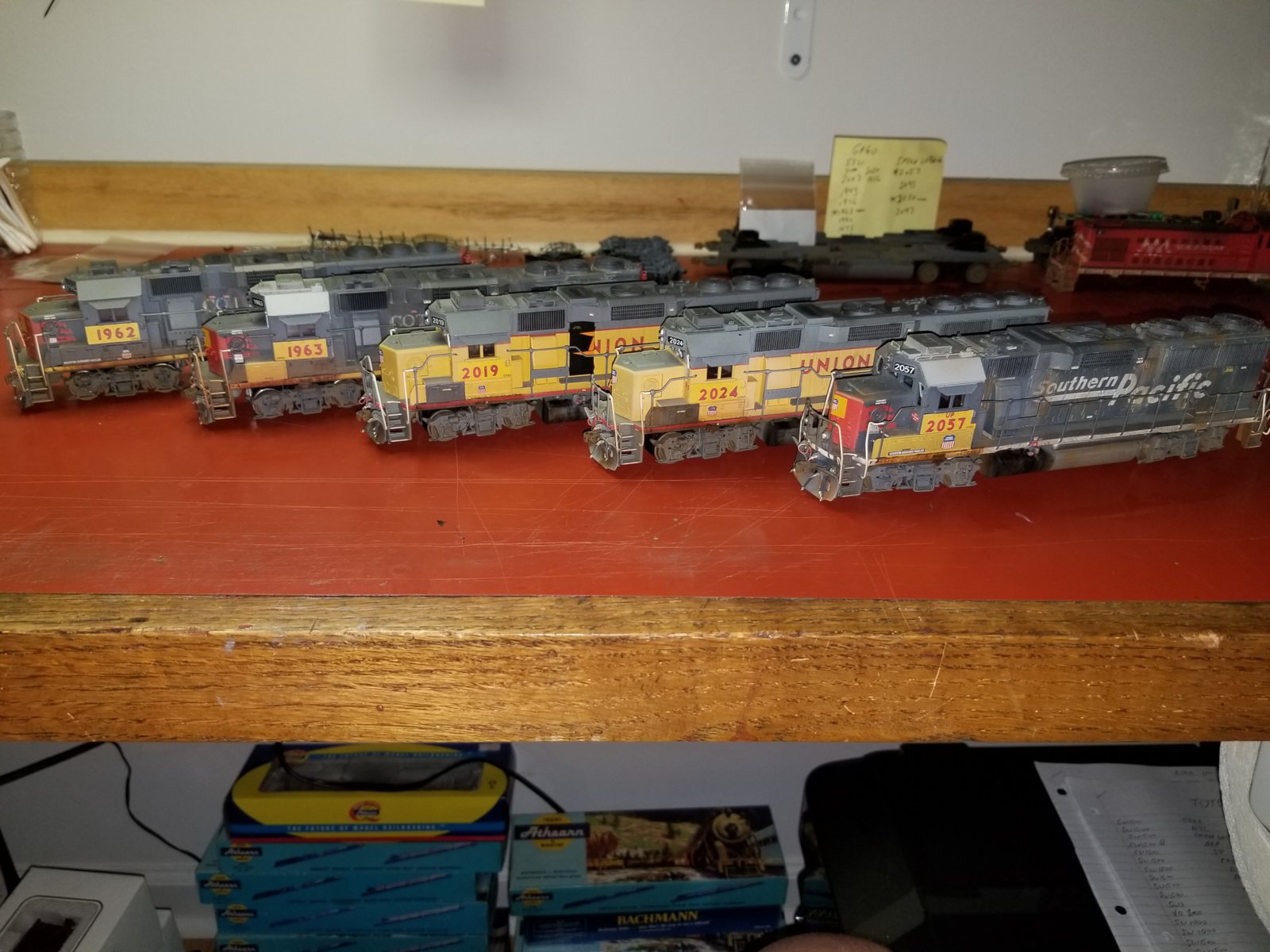 The next 2 are ones I need to clear coat tomorrow. 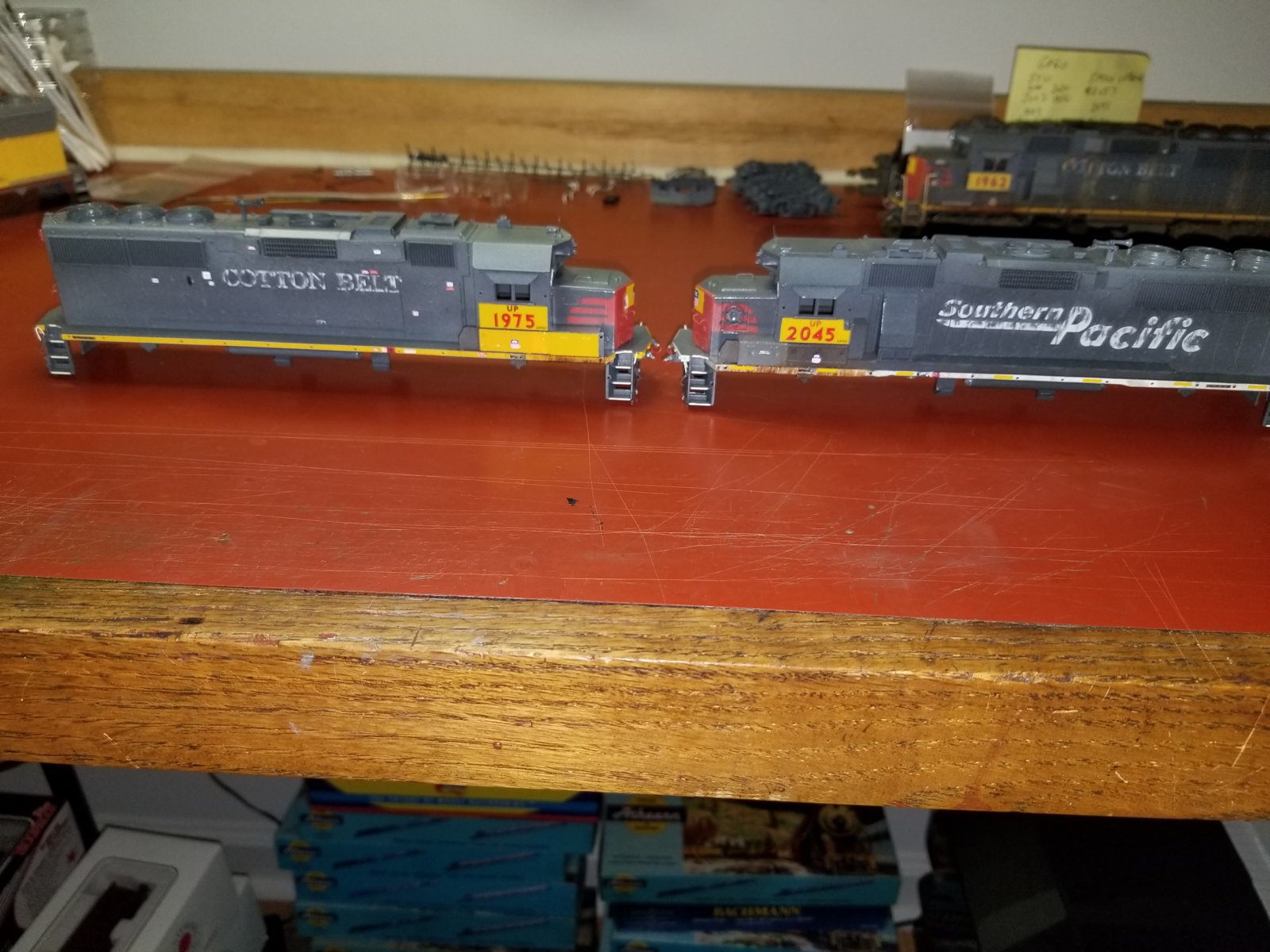 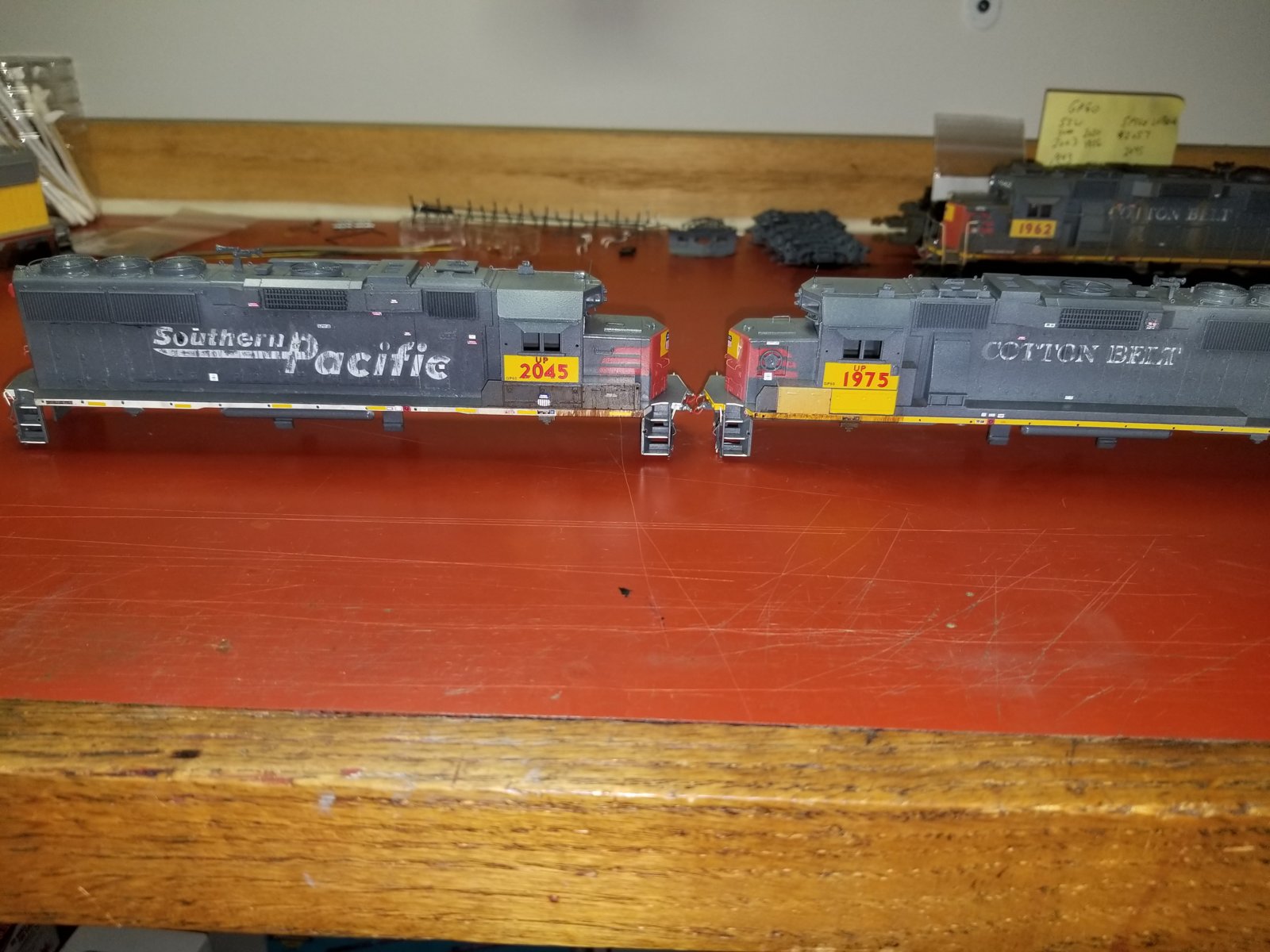 And finally the start of my wife's, lots of detailing to do yet. 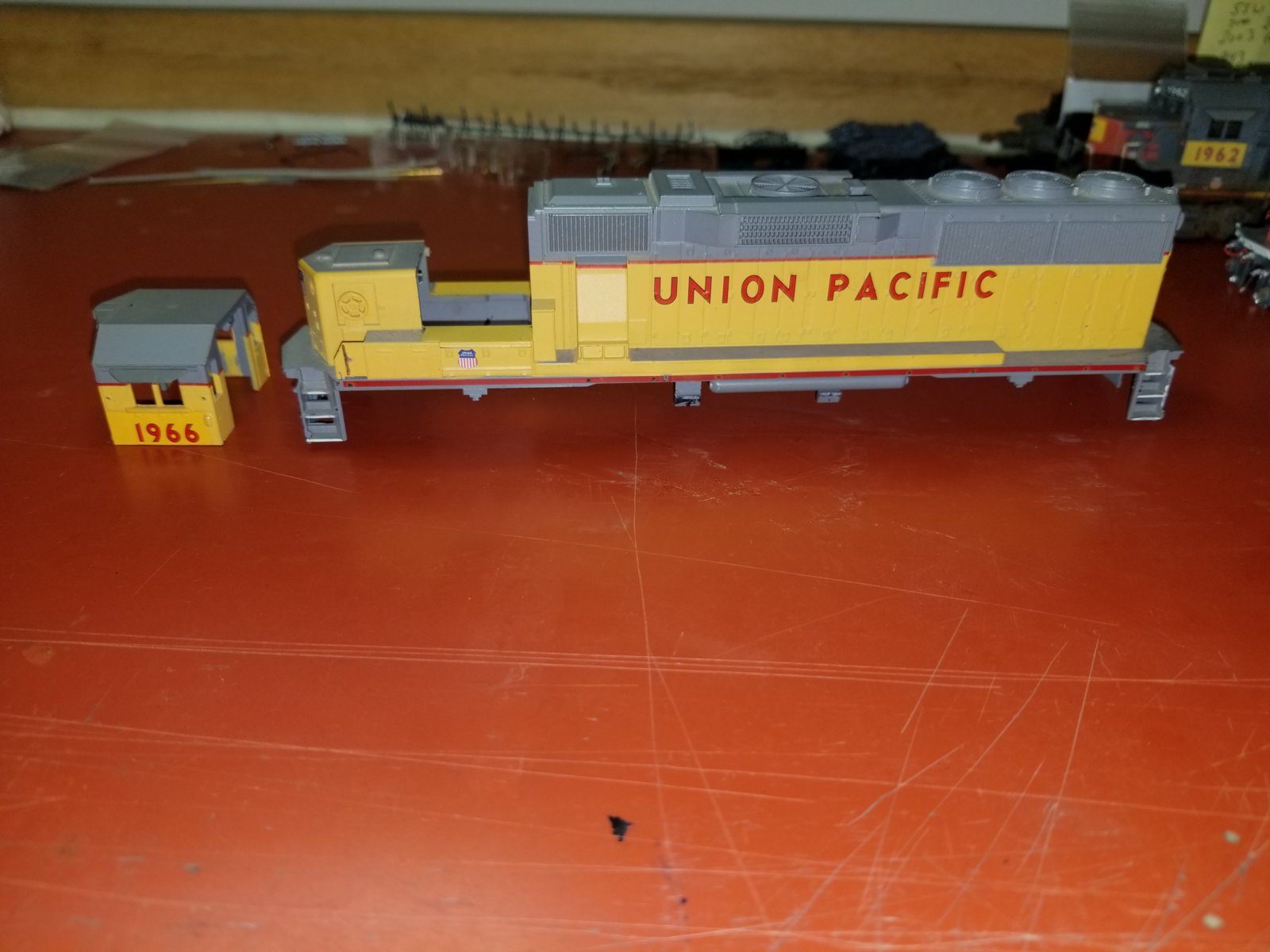 Staff member
P/bucket really did a "number" on them, eh! Nasty blighters.
I've got 2 P2k GP60's BNSF patched, blue and yellow warbonnets. Story apparently is they are lease engines and can only have that livery, even if repainted. Apart from that there is an Athearn RTR SP GP35 in the SP/SF merger scheme, another in PRR and an Alaska RR. Those all have NCE D13SRJ decoders fitted, but rarely see the tracks. There is another P2k GP38-2 non-dynamic in CNW livery, DC only, and 3 switchers, the Atlas SRY #152 MP15DC w\QSI sound, a Genesis MP15AC in CP Golden Beaver/NCE and an Athearn RTR SW1500 Southern RR DConly . And the other P2k UP GP20 that I put Tsunami sound into.

Didn't notice it until I went to clear coat them tonight. I forgot to put all of the small decals on the SP speed lettering one in the first picture. I will correct that tomorrow and start detailing the UP #1966.

Got some goodies in the mail today. They need some light weathering, then I'll be happy. This BN unit came DCC already in it. 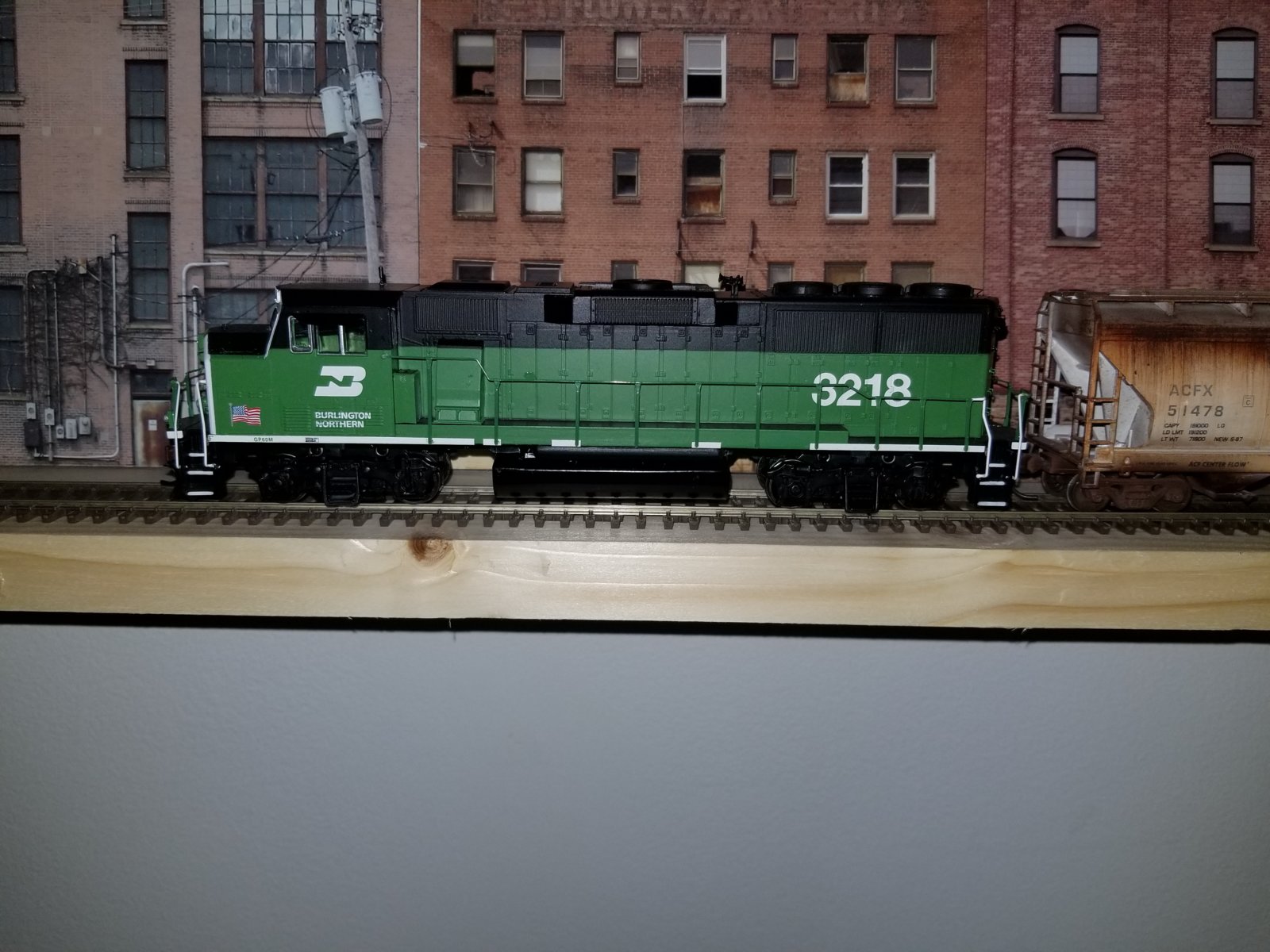 I've been looking for one of these since they came out. I finally remembered to buy one. Brand new, no wheel wear at all. 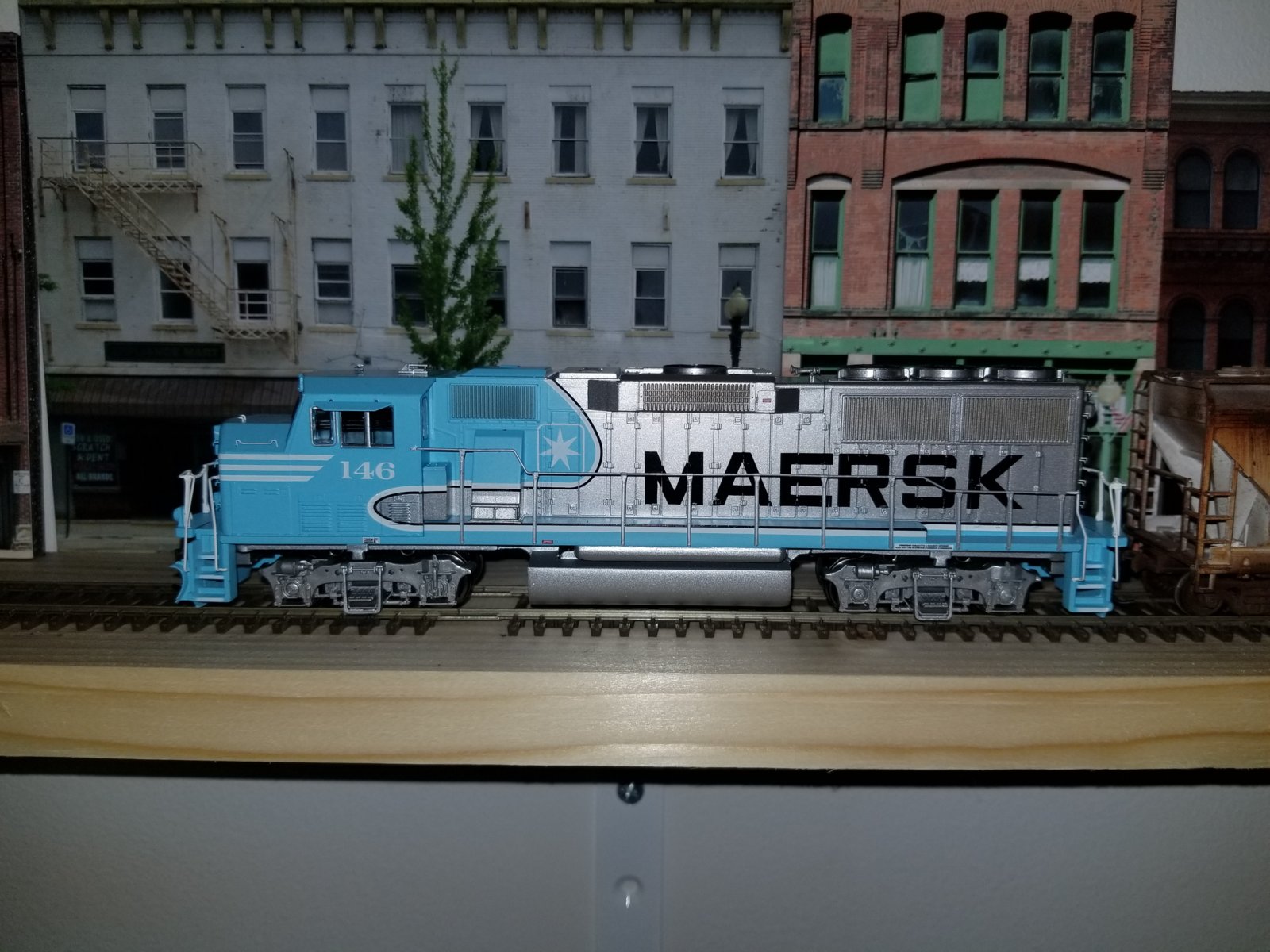 Yes, from the RTR line.

Darkened the grills, a light spray of dirt and rust underneath. Back in the boxes for now. 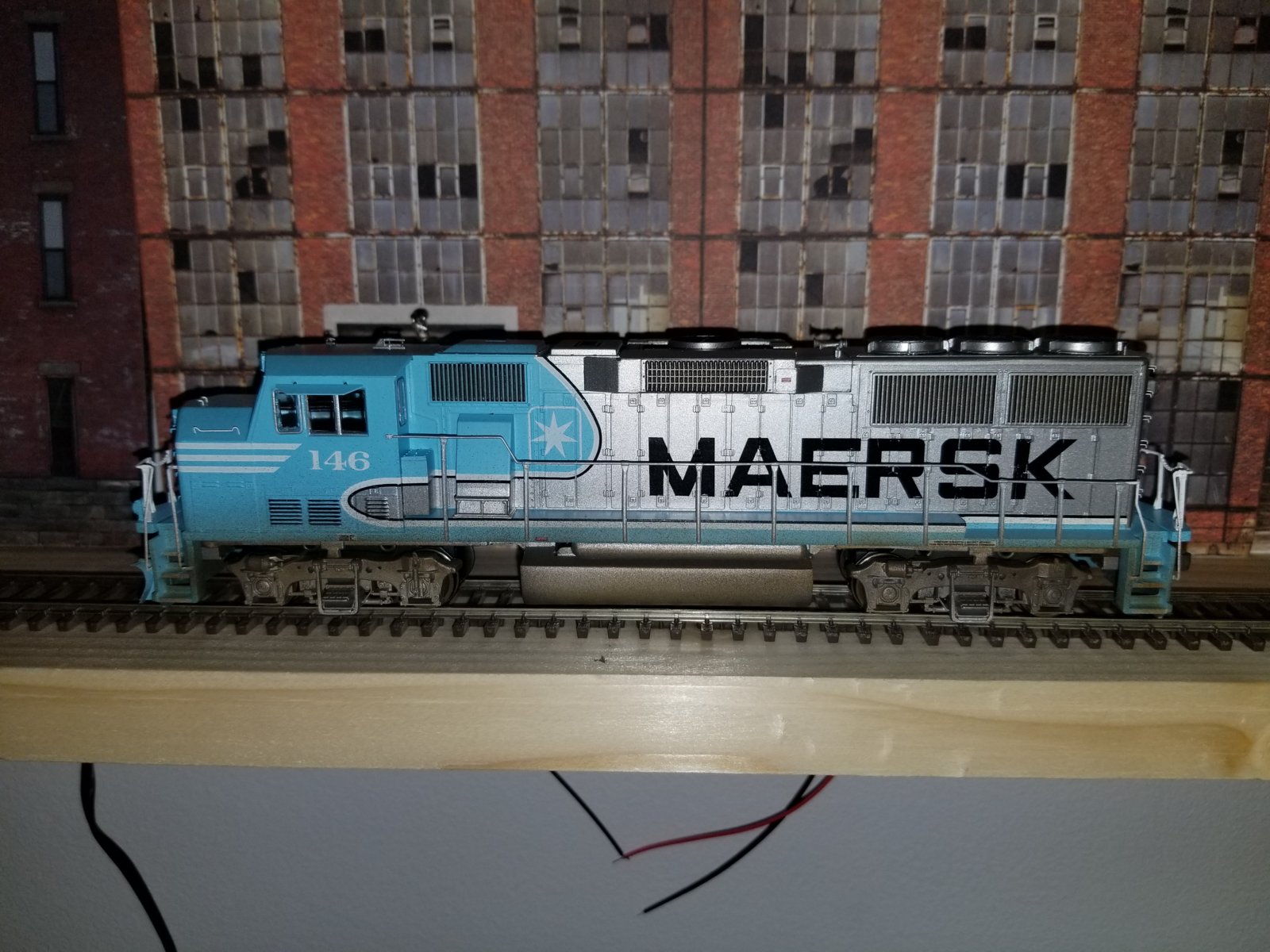 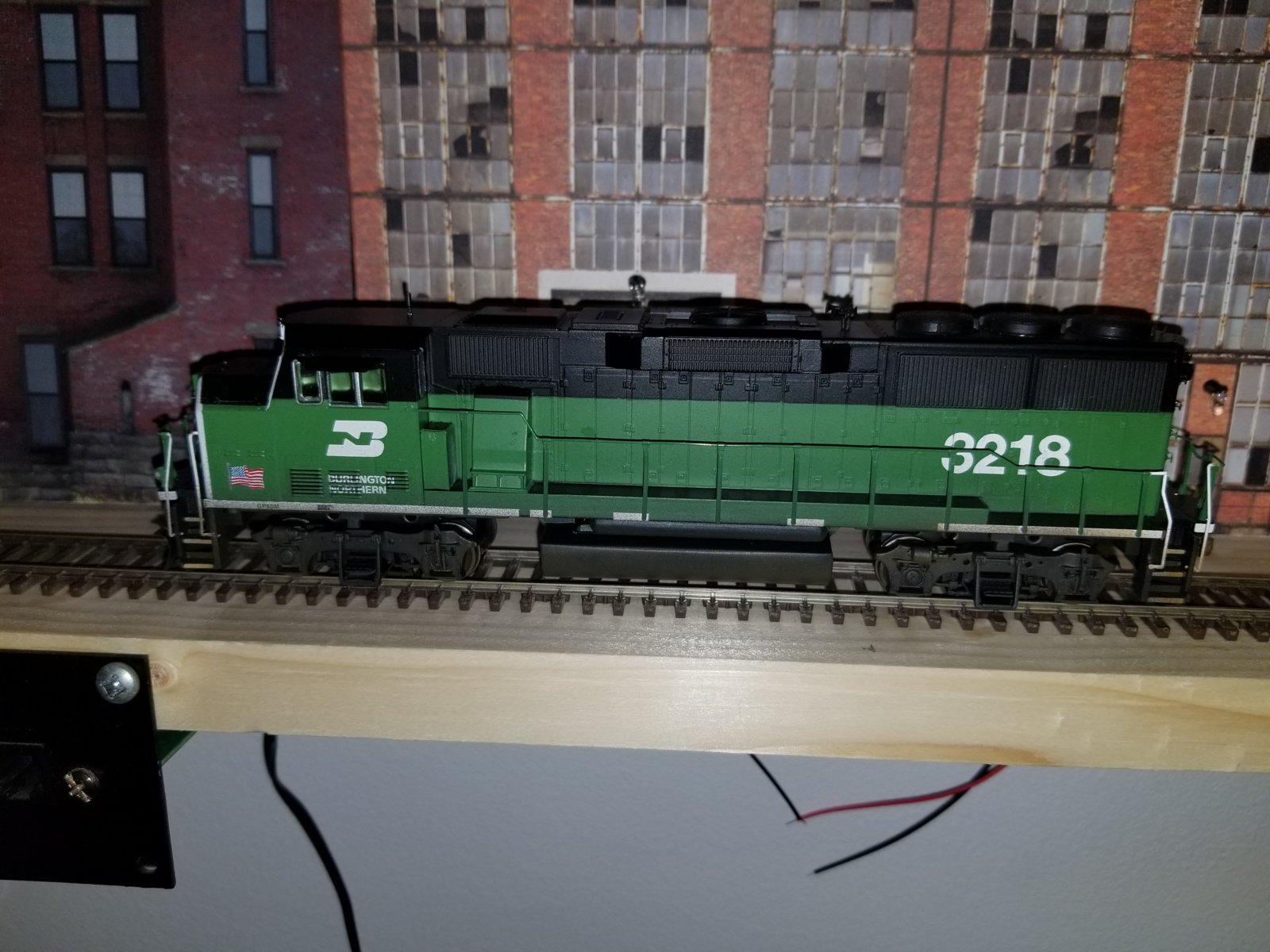 2 more for the Geep Fleet. They need dulcoated then blend the weathering on the body into the frame. 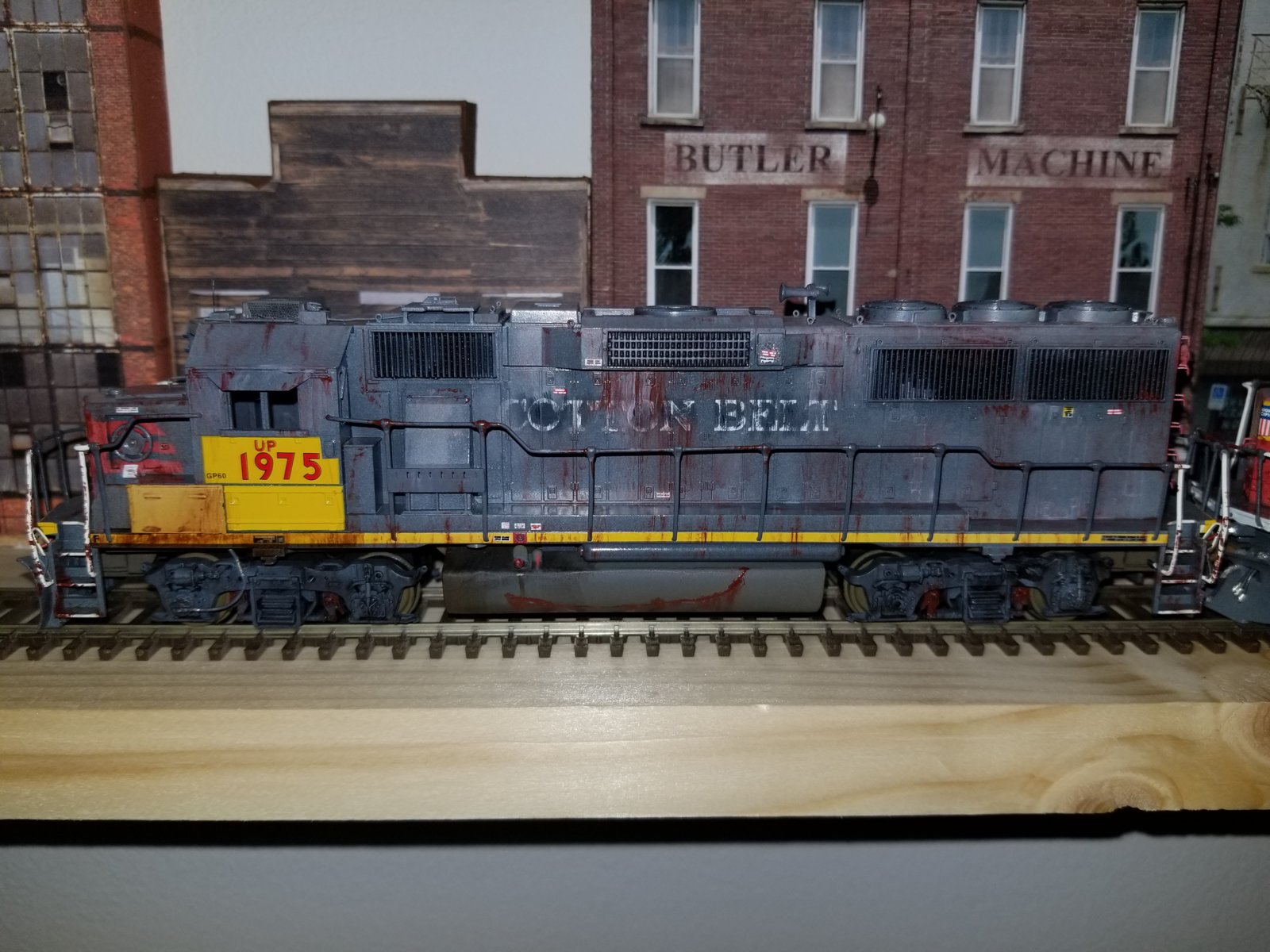 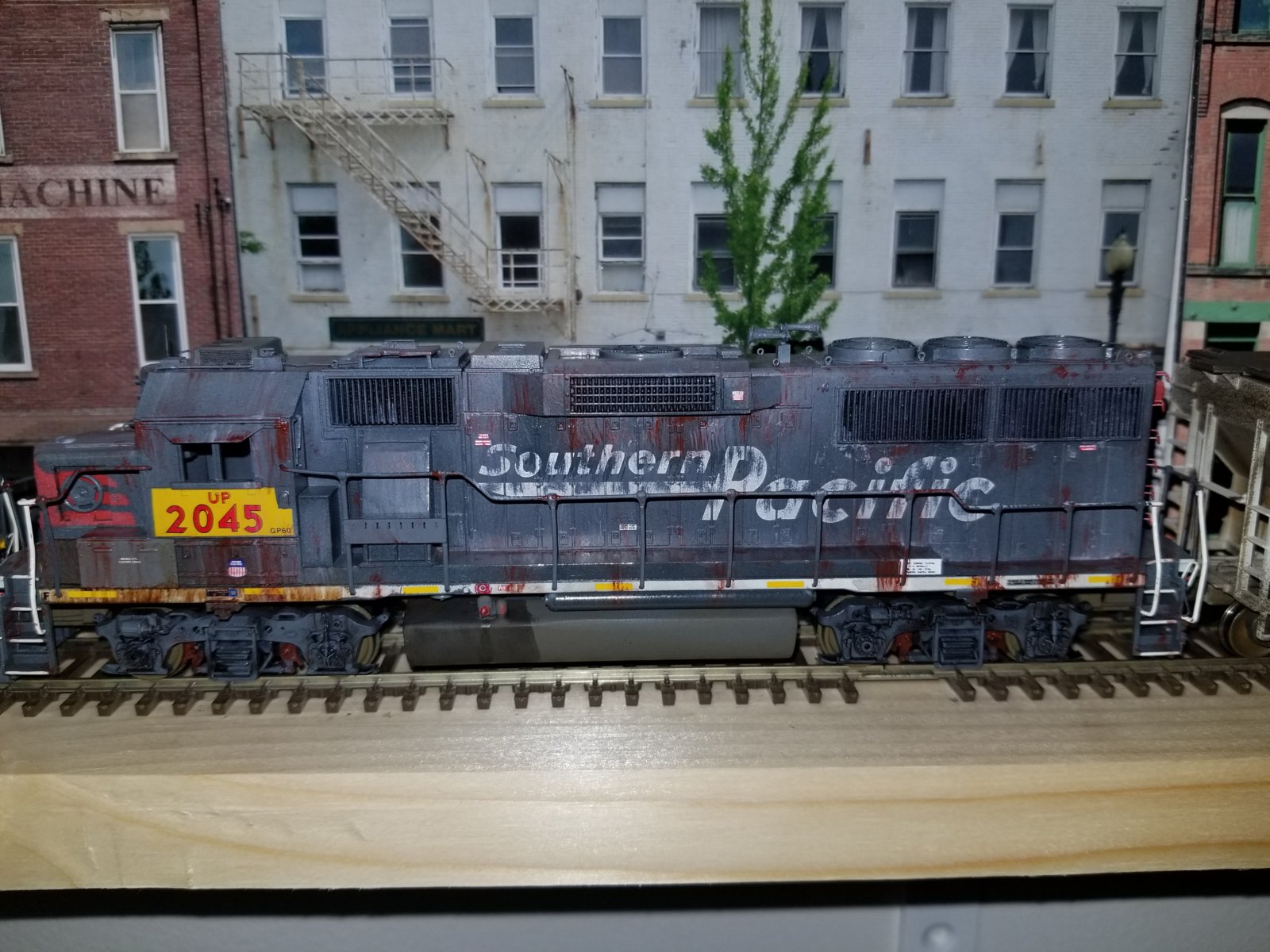 wheeler1963 said:
2 more for the Geep Fleet. They need dulcoated then blend the weathering on the body into the frame.

Going by the last pic of 2045 Sept 2013, some lightening generally will approximate it's appearance too.

Working on some old projects. First up is an old Mopac GP50 that got detailed out then a light weathering job. 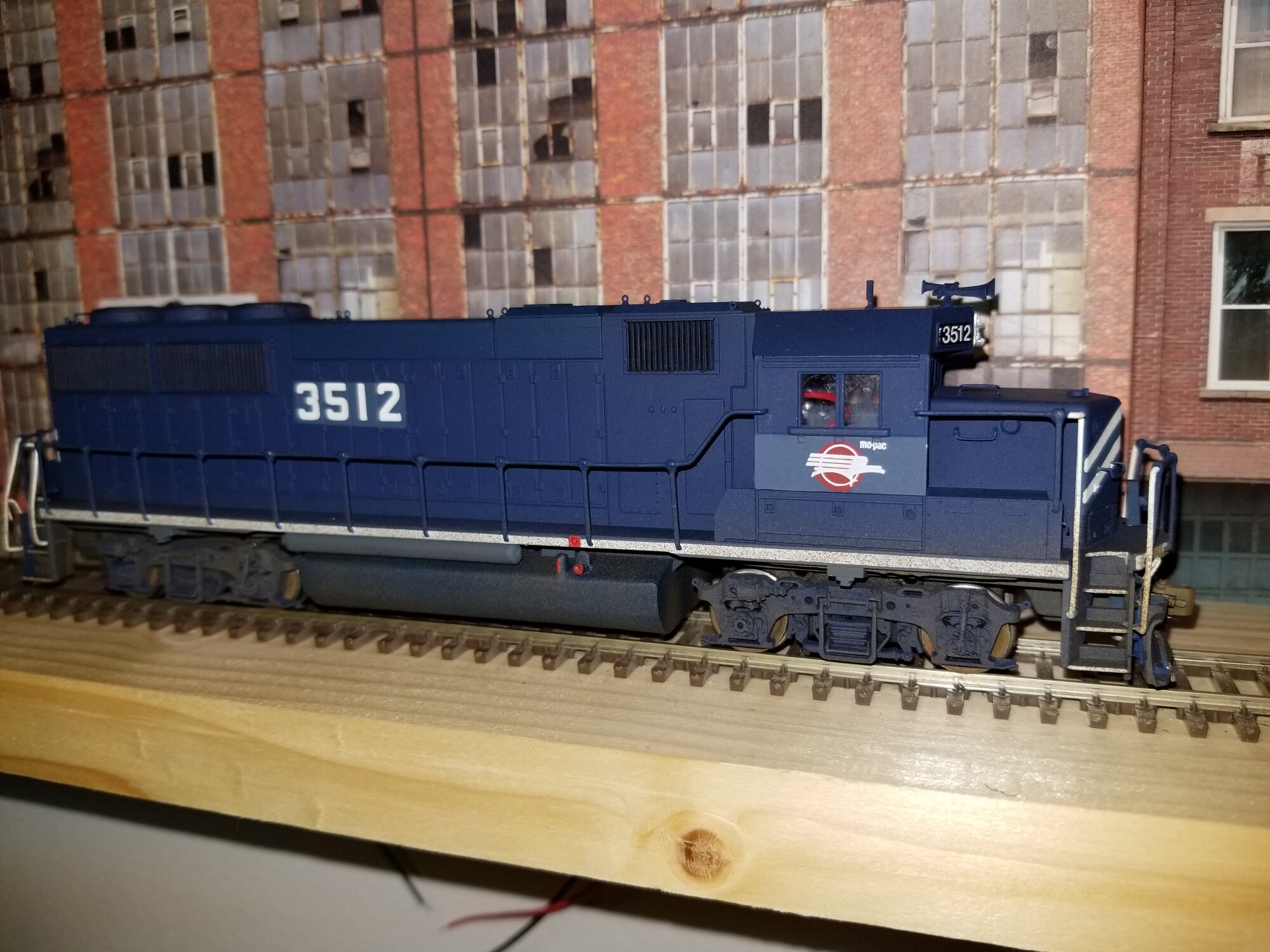 Next up are 2 Illinois Terminal GP38-2's that I bought back in the mid 80's They got details added and a bit of weathering. 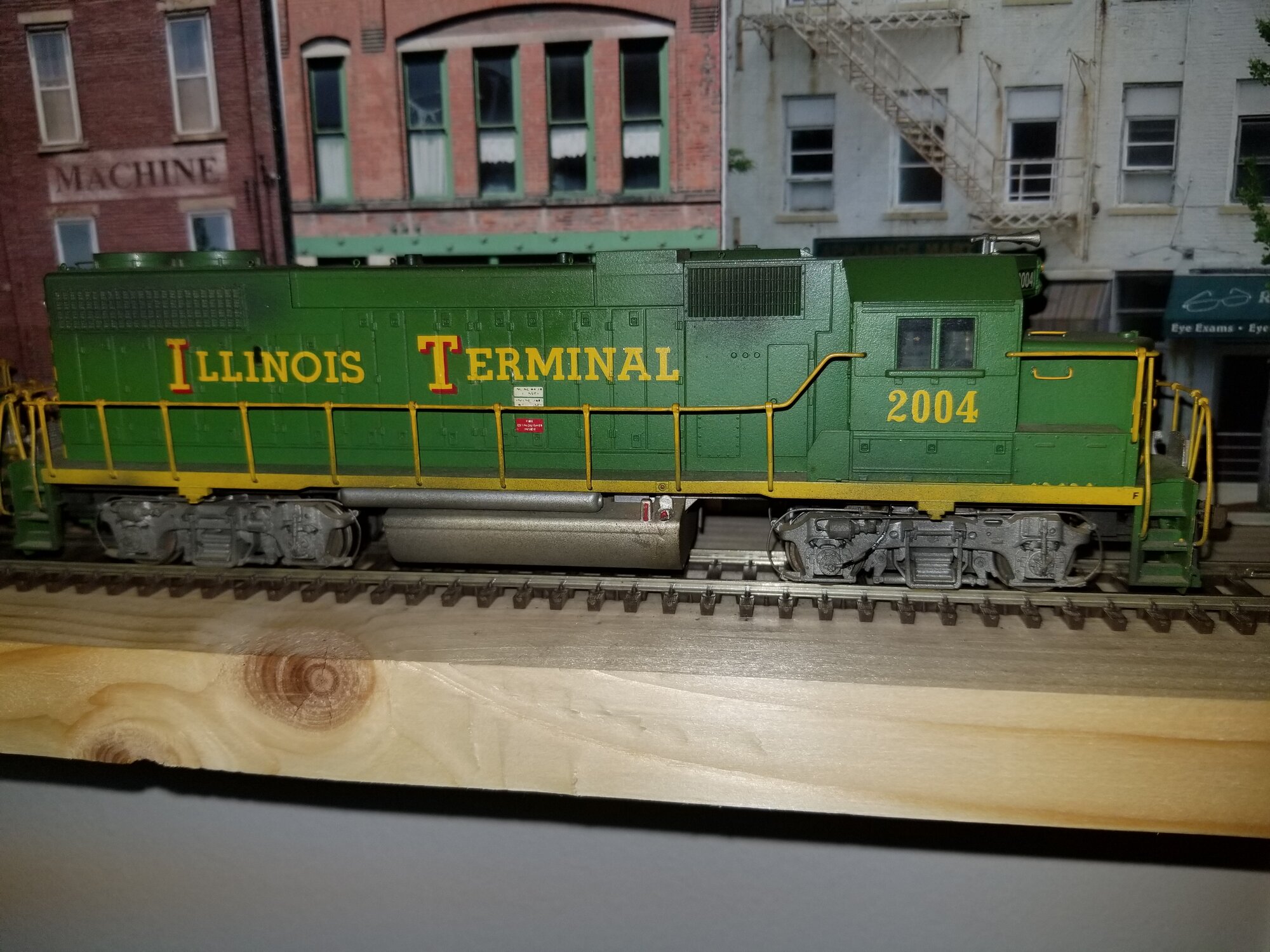 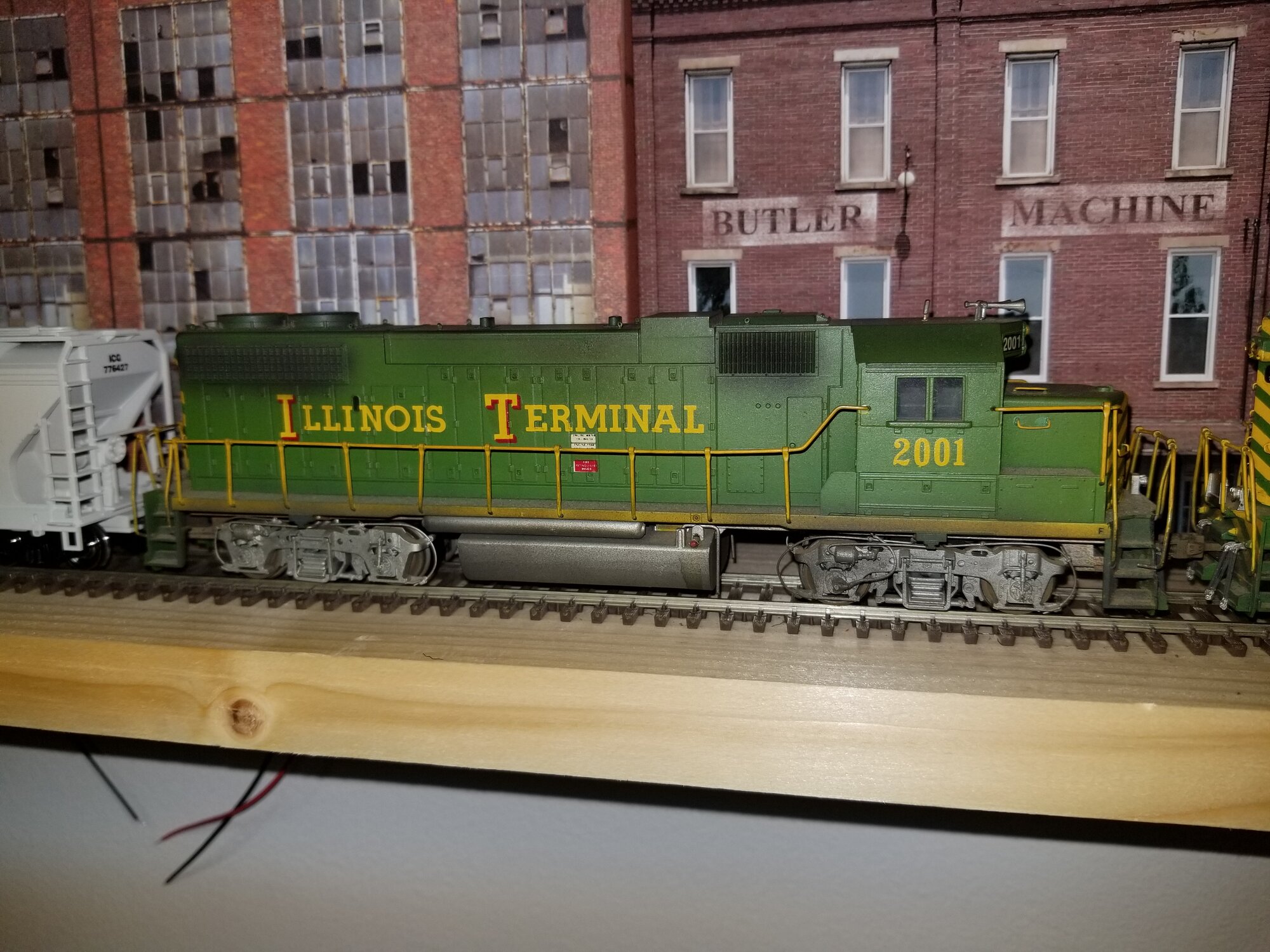 Will have something to add onto the end here in a couple of hours.........

As promised, gotta have something bring up the rear of the Illinois Terminal hopper drag. 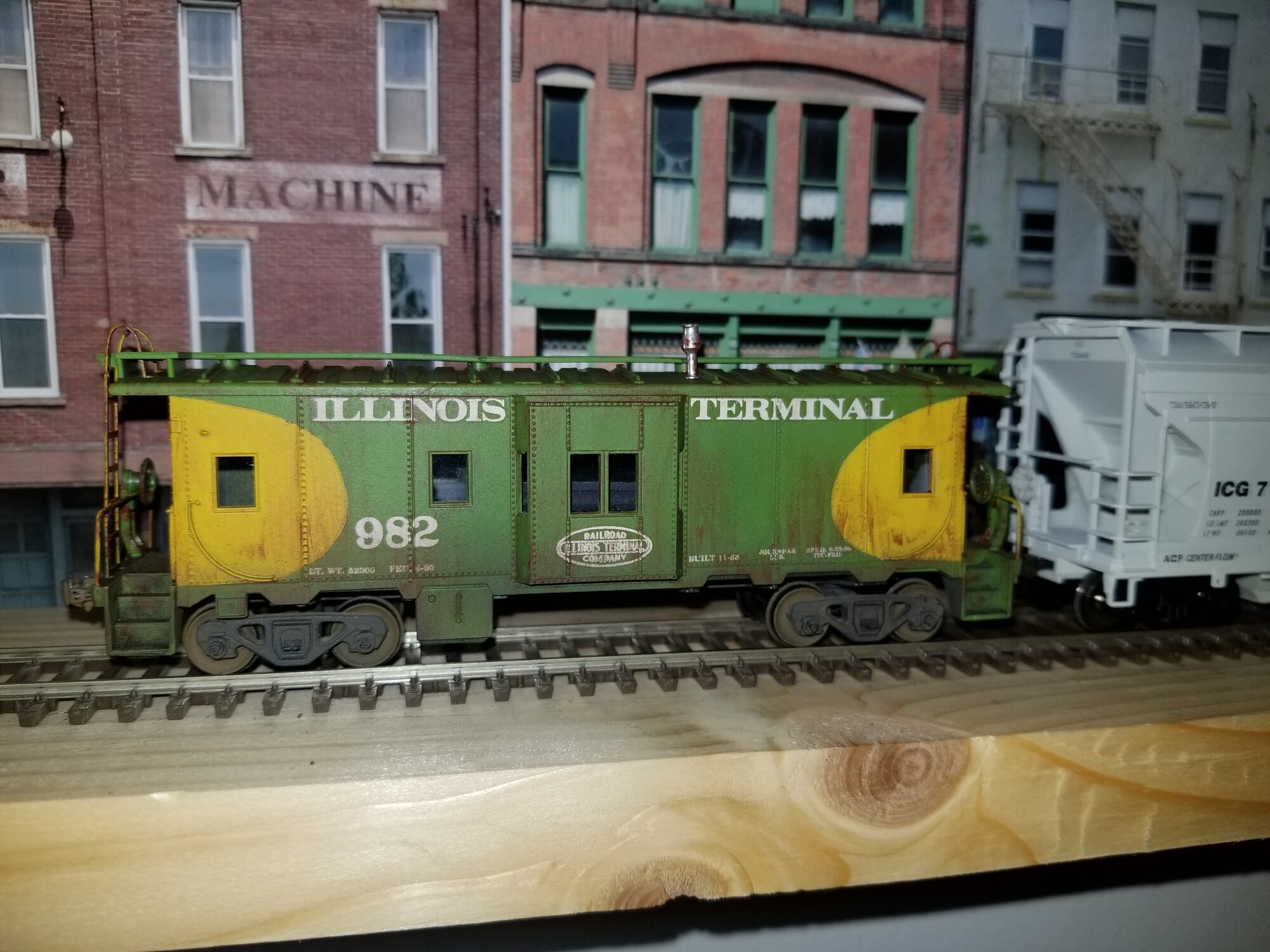