The BC and F Railway

Despite spending hours yesterday trying to get this upper level NOT be so linear, while also desperately trying to make a bridge work in this area, I ended up with this. Oh well. The red square on the left and the red circle on the right are where the lower track will enter/exit via tunnel portals. Once terrain and so forth gets put on, I'll keep an area or two removable so that if there happens to be in an issue in the tunnel, the emergency services can get to it.

Truth be told, I will probably continue to work on a way to make use of the bridge-maybe by cutting the 'earth' out from under the front track. Anyway, in this other picture I drew a viaduct under the track as it crosses over the water. The final design will probably not be fuchsia, but, you never know.

Overall, this has been quite an undertaking for me....and I've had some visions of what I wanted areas to look like, that probably won't look like them as this unfolds. That's okay too, because I'll probably like what I end up with regardless.

With the upper level 'complete', 8205 begins it's slow crawl around the barren landscape. After vigorous track and wheel cleaning it began to run smoother....even pulling a couple of freight cars.

Yes, I know water isn't blue, but I needed SOMETHING to bring some color into my world! Eventually, I'll repaint it a more realistic color, or maybe give a go with som,e water material.Anyway, it's very slow going, but starting to add some terrain as well.

A few hours worth of work this weekend.Not the prettiest, but definitely works. 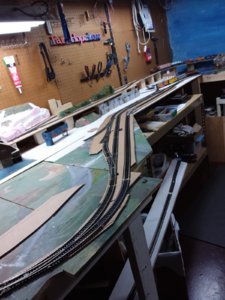 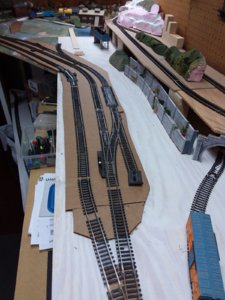 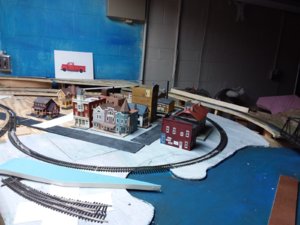 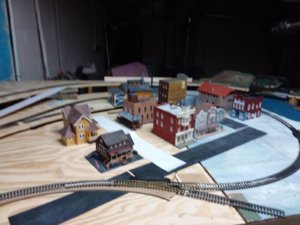 Used some 1" foam to raise the urban area. Plus, it elimantes a terraced area at the back, bringing it to the front where it will add some nice depth and character to the topography. Also, i cut wood out to move the through truss bridge into the urban area. The road and vehicles will pass underneath.

Still not quite sure what to do over here. Playing around with a mine, some possible terrain features, and pretty much overthinking every damn thing.

The green is just the undertone...eventually it will be covered by foliage.