SP Genesis Caboose inside and out

A friend of mine, Josh Delp and myself went to Tacoma Trains. Josh had a DCC version of the new SP Genesis caboose on order, and was eager to get his hands on it. I went because I just want to go to the shop. I had been told the cabooses were sold out, but located two non-DCC versions in the store. Needless to say I also walked out with a caboose. Josh got a roman lettered version while I bought a gothic version. Since Josh had the DCC version, I mostly photographed his model. Supposedly the non-DCC version also has lights in it, but the are just not connected. more on that later.

2&3 closeups of the new caboose. Need to remove the rock screen to see the interior better!

Really love the lights, interior, and etch metal walkways....and all the detail. Josh's caboose has a out of place step seen in the photo above. I had a angle cock/air hose laying loose in the box. And one of the etch metal steps was loose, as was a cut lever on one end.

Here are a couple more in service shots on the OMRS in Lacey, WA Both of our cabs together in the last shot.

I have the non-DCC version. Taking the caboose apart is rather easy. Just remove the two screws that are just inboard of the coupler box screws, and the underframe and interior will slide right out. You will need to free up the truck wires to remove the trucks.

On the trucks, there are brass plates on the inside of the sideframes that are held in place by the brake beam detail part. I've since painted these parts black (except for the axle contact area) and the wheels Rail Tie Brown and rebuilt the trucks. They look much better now. I also painted the belts on the generator black. I will weather the truck separately before installing them on the model again.

On DCC models there is a circuit board above the false ceiling. Non-DCC models don't have that, but surprisingly still have the truck pickups and even the rooftop LED's. So you're only missing the interior lights. The rooftop LED's have a pair of magnet wires running down from the roof, and I suppose direction is based on polarity. I already have a circuit in mind that not only will have the roof top beacon and interior lights, but will also run a FRED (I can hear the hissing now!).

The rock screens on the side windows don't have "glass" behind them. I'm going to try and find something that is a little more see through and rusty to install. Lots of seats but no stove in the car (brrrrr!). Unfortunately the seats are glued such that you can't have the conductor looking forward on the engineers side of the train. I plan to put a Conductor in a bay window seat and a rear brakeman on the rear steps. A little more work and this cab will be the pride of the fleet.

I finally finished and installed my circuit for lighting up the caboose. I did some extensive testing to get the lights just right and found a 3.3K resistor worked for the interior lights and the rooftop marker. The circuit is basically a bridge rectifier, a 470mfd cap to keep the lights from flickering on dirty track, a couple of sunny white 3mm LEDs for interior lighting. The high resistor value knocks down the output of the LEDs so it doesn't overpower the interior. One LED does great job lighting up the conductors desk while the other lights up the rear of the caboose and casts a light out the rear window.

That is a beautiful piece of equipment.

I also opened up the bay windows on the right side of the caboose and put a conductor relaxing in the seat watching the train ahead. I decided not to add the FRED to the caboose (I really had it in mind for a BN wide-vision caboose). Lastly a diagram of the circuit. 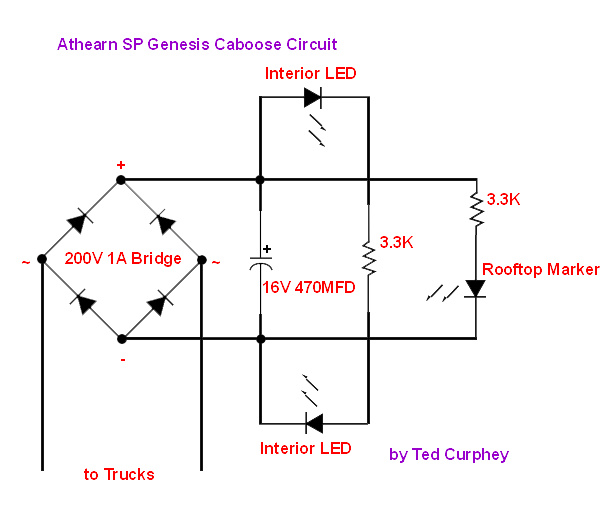 Do your lights reverse when the caboose is turned around?

Hey Alan. In looking at these cabooses,they somewhat look like the L&N 6600 series cabooses,but of course the SP cabs had a longer body,than the L&N's. Now if only Athearn would do the L&N cabooses,I would be happy. Although it would be a major stretch,I wouldn't mind having one of the SP cabs, but can't really justify it..William.

Espeefan said:
Do your lights reverse when the caboose is turned around?
Click to expand...

Nope, it's DCC which is AC current until the bridge rectifier makes it DC. It's setup so the light shines to the back and the conductor is facing forward.
D

I like it. Granted I don't model SP but those are still some nice cabooses.
R

Nice photo's Ted, and while D&RGW is my main squeeze, I grew up in SP territory in Sacramento area and had to get me one of those to go with my SD45''s and tunnel motors!
C

Thats pretty cool. You should come up with a parts list for this build. Where did you source the warm LEDs from?
W

Nice modifications Ted! Kinda sucks sometimes that the late real detailed pieces from Athearn (especially) need alittle work when you get them...Especially when the work is repairing damage incurred during shipment or perhaps earlier .

Tacoma Trains huh? I hit that place up everytime I go visit my mom. She lives out that way. At any rate, great looking models man!

Speaking of reparing, the tool box under my Genesis C-50-7 was angled up rather than parallel to the side of the caboose exterior. I had to bend it back. Otherwise these are gorgeous.
B