Staff member
Good Day All,
I have a dilemma here. I have maybe 20 pair of these trucks that I bought on a closeout from the hobby shop I used to frequent. They are good rolling On3 metal trucks. I am wondering if anyone can tell me who made them and if, IYO, they can be re-gauged for HO track.

I am determined to build a small On30 layout (even if it is only a shelf) and have quite a bit of scratch built On3 cars which, with some slight mods, work very nice for On30. Then I will be able to run also what few HO locomotives I have like the little diesel-electric that I recently purchased. Opinions - anyone? 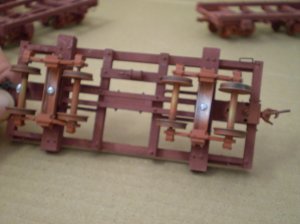 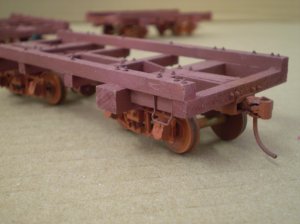 Staff member
I'm no expert on either of those scales Sherrel, but you had me wondering what the difference was between On30 and On3 as far as the track gauge/wheel spacing was. Now I know. Your On3 is wider gauge but both are O scale. To use your On3 trucks on HO track without having to change trucks as well, I would think you'll need to find HO wheelsets with axle lengths to match your On3 ones, so if you can measure the axles accurately, maybe have a look at the Reboxx wheelsets for a match. Here's ModelTrainstuff's pages for that brand http://www.modeltrainstuff.com/HO-S...Y&sort=3&cat=1452&show=30&page=1&brand=Reboxx

Staff member
An additional thought, looking at your pic of the underside the sideframes of the truck to the left appear to have been bent outwards, exposing quite a bit of the axle. I'm not sure how you get on with removing/replacing wheels on metal trucks as their not flexible like plastic ones, so take care. Maybe someone else can enlighten.

Staff member
Toot .. That is a good idea .. I will take one out and measure the axial length and wheel diameter. A good friend uses Reboxx all the time - says they are the best. I assembled these things 30+ years ago and I remember that they were in three pieces. I just cannot remember how I "stuck" them together. Will take a closer look tonight.
I was hoping someone would just say, "Squeeze them together".

Sherrel I think they are OO gauge trucks (1/76) they would probably work ok on a HO shelf layout without any curves, I'm speculating.

King Toot do you think OO would work on HO track? Or maybe the HO locomotives will run on OO track with no curves.
Last edited by a moderator: Oct 18, 2016

Sirfoldalot said:
I was hoping someone would just say, "Squeeze them together".
Click to expand...

Can't hurt to try. You could put them in a vice and use washers to avoid the axels. Watch close to see if the axels are bending.
Last edited by a moderator: Oct 18, 2016

Staff member
From what I read Sherrel, On3 is .75" - 19.05mm gauge and On30 is HO - 16.5mm. The ON3 is regarded as representing prototype 36" gauge, whereas On30 represents 30" gauge on HO track, and sometimes used for other gauges close to that. I don't know if there are any manufacturers of the .75" track, so possibly anyone doing that would hand lay it. They both follow the Scale of "O" = 1:48 which explains why the rolling stock is of the same size. Can't tell from your pic whether the axle ends are pointed or squared off (plain), but as the axles don't have rotating bearing caps, which is the usual reason for having plain ends (axles pass through the truck bearings), it would be reasonably safe to assume them to be pointed. The fact that those ends of the axles that can be seen on that left truck, also are slimmer in diameter than the axle between the wheels, indicates that they are either Intermountain, or Reboxx. The IM's, I don't think offer different lengths as far as I know, but Reboxx does.
Last edited by tootnkumin; Today at 12:21 PM.​
I reposted my post from the Coffee Shop to here to keep the continuity going. Just to comment on whether you could squeeze them together. As it's not the axle length that needs shortening, it will depend on how the wheels are mounted on the axles. As I noted the ends appear to be slimmer than the center part. As it's the wheels that need to move inwards (and even distances) it would depend if the holes in the wheels match that smaller diameter, AND if the wheels are currently resting against the thicker center part (as a stop) to pre-set their gauge to On3. If the wheel center holes are the same diameter as the main axle and those axle tips are part of the whole axle i.e. the axle is one piece point to point, then it may be possible to move the wheels inwards along the shafts by pushing and rotating them to the smaller HO gauge. I believe that some of this type of axle/wheel, larger inner, smaller tip, actually have the tips/points as part of the wheel and the center axle is separate again. Walthers uses this system on some of it's wheel sets, where the metal wheel and tip are 1 piece metal, and the center axle is plastic to give each side electrical isolation. In this arrangement the wheels, which have a recess in the wheel's back that matches the axle size and press onto those plastic axles until they stop, once again setting the gauge. I believe this is also the method used by IM and Reboxx, only with metal axles and insulators in the wheels. A note on Reboxx here, they have sets where both wheels on an axle are insulated in this way, rendering the metal axle inert, and others with only 1 wheel insulated. Probably so the axle can have pickup wipers contacting the live axle and by swapping them end for end in a truck, pick up current from opposite tracks.

Sirfoldalot said:
I was hoping someone would just say, "Squeeze them together".
Click to expand...

Well, They look like two plastic wheels on a metal axle so I would say try to twist them together. Don't just squeeze but twist while doing so. The hard part is that each side has to go in a bit, otherwise the axle won't be centered.

Iron Horseman said:
Well, They look like two plastic wheels on a metal axle so I would say try to twist them together. Don't just squeeze but twist while doing so. The hard part is that each side has to go in a bit, otherwise the axle won't be centered.
Click to expand...

Having a look back at your pic, I would agree that the wheels do appear to be plastic. The black is showing through the paint on the treads, Whether you are able to move them inwards is going to be determined which size hole the wheels have in them, the smaller size of the end bits or the larger size of the center section. If the latter, then probably yes. If the former, the smaller ends, then they are no doubt hard up against the stops.

Staff member
Thanks, Guys! The wheels are metal - very nicely made wheelsets. The center portion is either a sleeve or the actual axle - I don't have one in front of me to look at.
I was able to find them: Wiseman Model Services has therm listed for $29.95 pr.
I need to find the box that I stored them in to see how many I have and measure the wheelsets. I have a feeling that I will try and sell them and then purchase Bachmann On30 trucks. (the simplest route to take) Hopefully there is a On3 modeler out there looking for a good deal - say 1/2 price or so? 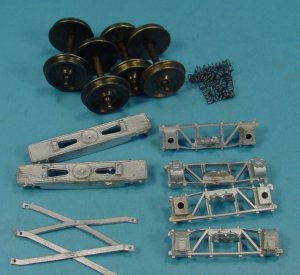 Staff member
Why not contact them, see if they have On30 wheelsets that fit? Looks like they are a plain straight (no point) axle. If they do have a sleeve in the center over the axle to set the gauge, maybe they can supply those to regauge yours. It would be a shame to sacrifice such high quality, good looking trucks. Bachmann trucks are like no other, the hole in the bolster is quite large and they have a flat, thin headed screw that uses that head to center the truck, so you would need them as well. The thread is coarse because it screws into the plastic of the car, like a self tapping type. If your flat cars are metal, you may have difficulty because the phillips recess is very small and shallow. Not much leverage.

If I did not have some HO stuff that I want to be able to run as well -- I would just stick with the On3. Maybe I might just do that anyway.
Last edited by a moderator: Oct 20, 2016

Staff member
Don't give up on it, if there isn't a sleeve on the axle, maybe they could supply the On30/HO axles to swap your wheels onto, writing to them won't even cost you ink or a stamp
You must log in or register to reply here.
Share:
Facebook Twitter Reddit Pinterest Tumblr WhatsApp Email Link