I been watching a series of videos on several layouts and watching recorded ops sessions. In all the videos and different layouts the locomotives are run at a very slow speeds which I believe increases the realism of the locomotive moving rolling to different locations. Also, not once did I see a locomotive stall or hesitate on the layouts.

I personally run my trains at a slow pace on my modest sized layout to make the layout seem larger than it actually is and increase the time it takes a train to cover the mainline. Switching is also done at slow speeds to copy that of a prototypical switcher working the yard. What was missing was the engineers using the locomotive's horn to broadcast starting forward, backing up or stopping, yet some did operate the bell.

I know of some operators who run their trains at warp speed and it sure takes the realism out of the action!

How do run your trains and switching locomotives? 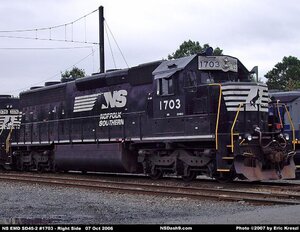 Photo by Eric Kreszl from the internet.

Greg, this is a great thread! I'm not big on prototypical anything, hence my love for Lionel 3 rail.

On the other hand, it does make even my trains more interesting. I find myself buying more and more Scale O trains and less and less of Traditional scale trains.

The more I learn about Legacy, DCC and other command control systems. I find more settings to enhance realism, momentum and others.

I bought a MTH HO locomotive from Terry (the master of CVs) and he had preset the locomotive to run in DCC and like a real locomotive. It was so cool to see how slow the locomotive started from a dead stop and how far it took to come to a stop from speed.

At first I thought there was something wrong, but after I realized what was happening it seemed to bring my train to life!

I agree with running the locomotives slow to make the distance covered seem larger. Warp speed running is something a 7 year old would do. Besides, this supposed to a fun and relaxing hobby!

I run my passenger consists up to 90 scale mph, but only out on the main...and not all the time. Mostly I run them between 65 and 79 mph.

Freight drags run from 5 mph on the Big Hill up to 69 mph. I left behind slot car racing decades ago.

I try to run my locomotives at a prototypical speed - which is pretty slow since I'm switching in town.

I also cranked the starting delay and momentum way up and use the locomotive brake to stop. It really changes things up when you have to plan to manage the momentum and brake.

I started watching a video about operations the other day and had to turn it off. He had no momentum and was just zipping up to the cars and around the yard.
G

This time around I am using batteries in everything and just using the track to charge, some of the locals I may use analog . Sound is way down on my to do list . I'd rather spend my money on track &industies, than the sound of cows farting around in stock car.

Yup I too run my mains at fairly close to proto speeds and slower for the locals.
When switching I usually allow time for the ”switchee“ to walk to or from the train to do their job.
I also set out or pickup cars at a facing point switch by separating the locos like we did with the Central Manitoba Railway on the Pine Falls sub. to keep things interesting.

Staff member
When I belonged to my local club, we had a member we nicknamed "Launchpad Larry"
While the rest of us were running our freight trains at a scale 40mph or so on the main, he was running coal drags at 70. Up the mountains.
E

I have low RPM motors in most of my re-motored steamers, and I limit top speed by DCC in my decoders where necessary. 40 mph or so is plenty fast for freights and 70 mph for passenger trains. Slower is better. Savor the run!
M

Another aspect is that even running slow it's still might be faster than you think.. What looks like 10-15 mph to some is really 20-25 mph.. And what looks like 2 mph may actually be 6 scale mph...

Greg@mnrr said:
What was missing was the engineers using the locomotive's horn to broadcast starting forward, backing up or stopping, yet some did operate the bell.
Click to expand...

In the 1st edition Tsunami, using CV198, you can select the sounds you want to operate automatically, adding their individual values together, and have the forward, reverse, stop, horn/whistle signals, the bell, on/off and brake squeal, all operate according to speed steps, so there's no need to touch any of their individual buttons at all. The grade crossing signal can also be added, but I found that one was too load sensitive on long trains and would blow inappropriately when just advancing the throttle, but otherwise was ideal in switching operations. Doesn't stop the horn/whistle. and bell being used otherwise.

Greg@mnrr said:
How do run your trains and switching locomotives?
Click to expand...

I do not run them very realistically. I discovered a long time ago that 100% realistic operation is both hard (difficult? on several levels) and boring. There is a reason the railroads have to pay engineers to drive the trains.
You must log in or register to reply here.
Share:
Facebook Twitter Reddit Pinterest Tumblr WhatsApp Email Link