A lot of discussions center on Operating Sessions and exactly how the owner of layouts expects his session(s) to operate. If you have Operating Sessions on your layout, does your layout use Car Cards, Waybills, a Dispatcher, a computer generated system or car tabs to name a few ways of operating.

If you don't have Operating Sessions on your layout, but operated on other layouts, what method did you use when visiting another layout?

Did you enjoy being part of an Operating Session and what was your most memorable Session?

When I do op sessions on the D&J Railroad, I use Way Bills for each car that will be moved. Groups of cars, i.e. coal cars or tankers will have all car numbers on one way bill if they are all staying together. When the car arrives at its destination a new way bill is created for the cars next move, either as an empty or as a new load.
I have 14 industries on the layout and setting up an op session typically takes a couple days to put cars in place, write up way bills and assign the right train that will move it depending on which direction the siding is oriented.
I'll typically start an op session with just free running until all the operators arrive then I start making up train crews, i.e. engineer and brakeman then assigning trains to each crew. As the layout fills the 2,000 square foot basement, it takes the crews about 2 hours to complete their assignments and return their train to the division Balfour yard. After that, its free running again until they can't walk anymore. 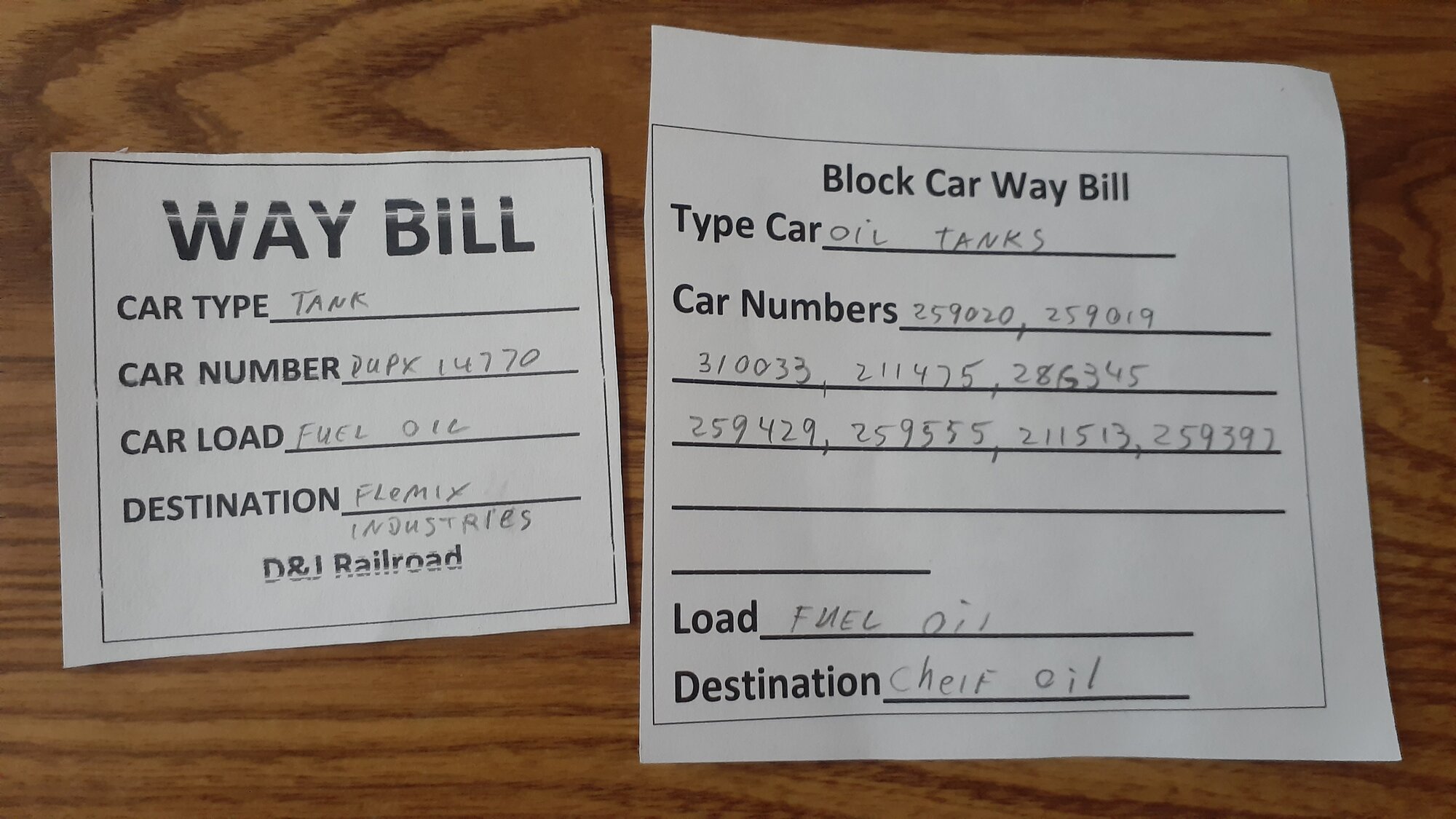 Some guys will come just to watch the operations while others really get into switching the industries. I have one section where three industries are in one area but the train crew drops off and picks up cuts of cars from a holding track. From there a local switcher is assigned to spot the cars at the specific industries. 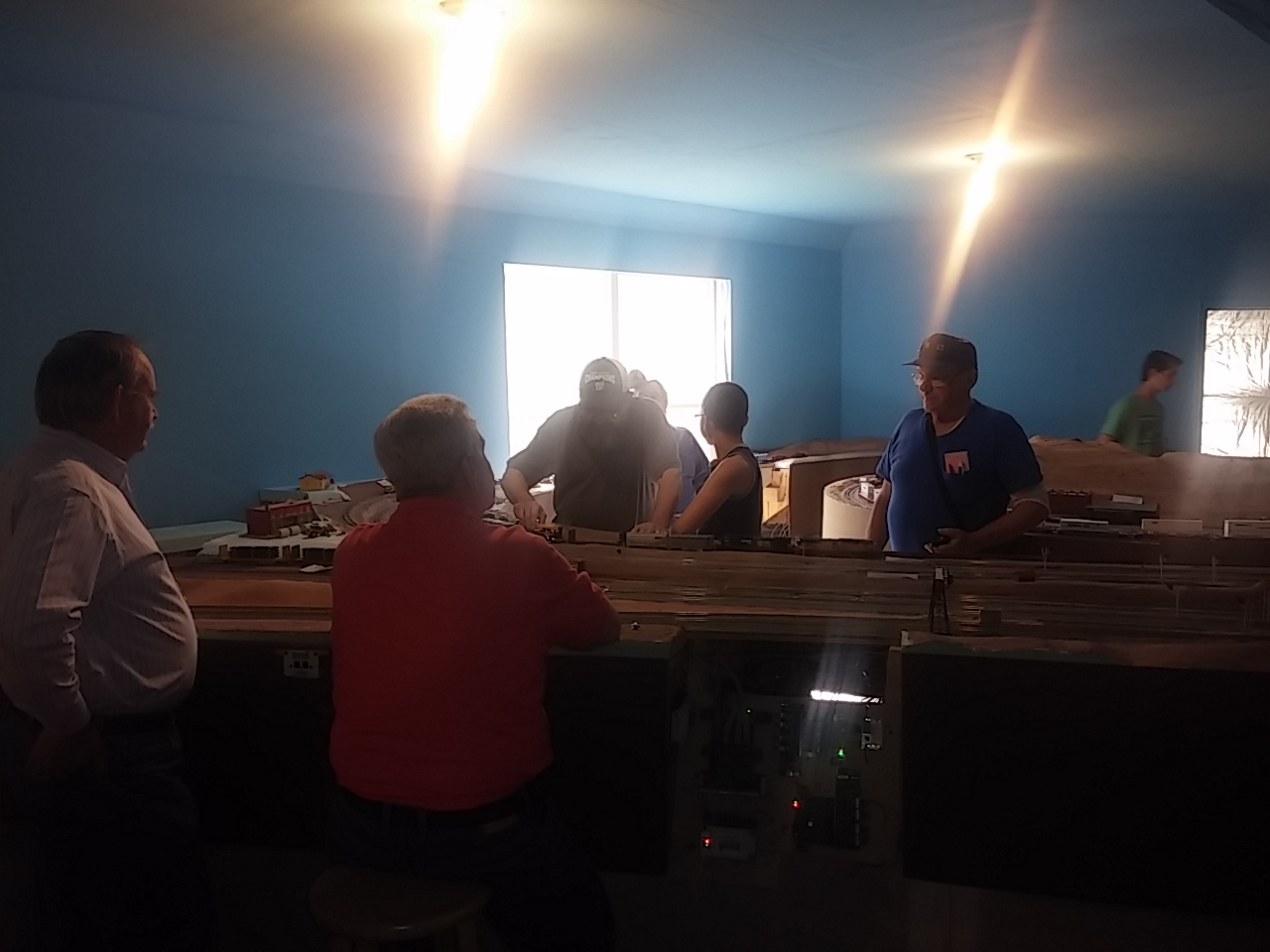 For car control, our club layout uses the classic Car Card + Waybill system for car movements, with some tweaks to how we populate and control the system but that's behind the scenes during setup and not seen by operators during the session although it has the effect of getting very realistic traffic and train consists.

Train control (dispatching) is done with a form of track warrant forms on one line, and the other line will eventually be CTC signalled, although currently that is in the construction and implementation phase and we're using informal verbal instructions to move on the piece that is currently built.

My home layout doesn't exist yet, but will also use CC/WB for car movements, and probably timetable operation with informal "train orders" for train movements.

Two other home layouts I've operated on also use CC/WB for car movement and verbal train movement authority from a dispatcher.

Another local modeler uses switch lists (i think manually prepared before hand) but the layout only handles one train at a time, so no dispatching of any kind. Old school DC block wiring. Essentially a large single loop with a LOT of industrial switching. "Operating sessions" are basically switching excercises for one crew.

Another friend who just has one large industry (paper mill) modeled so far prepares a series of switchlists in advance when he has a group of people over, so a few different crews can run the mill switcher. This layout will be expanded yet into the rest of the room, and I'm not what his operations will look like at that point.
Last edited: Jul 27, 2020

Greg@mnrr said:
A lot of discussions center on Operating Sessions and exactly how the owner of layouts expects his session(s) to operate. If you have Operating Sessions on your layout, does your layout use Car Cards, Waybills, a Dispatcher, a computer generated system or car tabs to name a few ways of operating.
Click to expand...

I have so far taken part in one official operating session at the North Metro club. We use very streamlined car cards which are not loaded with info and are easy to read. We also have CTC with an integrated, but optional, dispatcher's desk. The night I participated, we had someone in as dispatcher.

Did you enjoy being part of an Operating Session and what was your most memorable Session?

Honestly it was hit-or-miss with me. 1/3rd of the people who showed up did not do so to operate like the rest of us and just did the typical loop run stuff like we have at our open house. This is fine, except for the fact that these people did not communicate with the rest of us. This unwarranted traffic made issues for me, as my switching job needed to cross our double-main more than twice to get the job done. I nearly lined some UP biz train on a collision with my MILW switchers because of this.

Normally I do a job or two on other nights when less people are around. Far more pleasant.

DakotaLove39 said:
1/3rd of the people who showed up did not do so to operate like the rest of us and just did the typical loop run stuff
Click to expand...

If you're playing monopoly (I can think of many other board games I'd rather play but this one is more universally known) with a group of people and one person is just moving pieces around and doing whatever they like and not following the rules of the game you're not going to be having a good time.

I've operated on a few different layouts and everyone understood what they were there for. Our club runs formal operating sessions with dispatching, switching operations, and car forwarding using car cards. Everyone knows the intent and are there for it - some operators even come from a few hours away, and we sometimes have guests that come out specifically to experience the ops. Our club isn't shy about positioning itself as the "serious"* prototype/operations so we attract like-minded folks and people that are eager to learn skills in the hobby.

*(that doesn't mean we don't have fun together, and I've made good friendships in that group)
D

I had/will have operating sessions. In the past I have had 3 yard jobs and 2 road jobs, future I will have 4 yard jobs and 3 road jobs (when current expansion is in service.)

I generally use TT&TO, but the volume is so low, that I generally act as the dispatcher. Sometimes we use "verbal train orders". When the expansion is done, I'll most likely have to have a dispatcher.

Generally most of the op sessions I attend at other railroads use CC&WB, a few use JMRI lists and a few use CC&WB combined with handwritten lists. Dispatching is a mix of CTC, TT&TO, a few track warrant layouts and some verbal authority (mother may I).