I have some freight cars I am trying to sell, but I am not sure if they are O-Scale or Lionel. Is there a difference? Can you tell from the trucks? The wheel-span appears, on these two cars, to be slightly less wide than some others which I know are not Lionel. And the knuckle couplers are much smaller. But these cars don't say "Lionel" on them, and the Pennsylvania, at least, appears to be kit-built. I don't want to be selling someone an O-gauge car and then have it turn out to be a Lionel... Thanks for help... 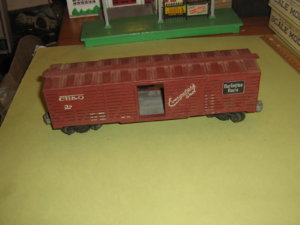 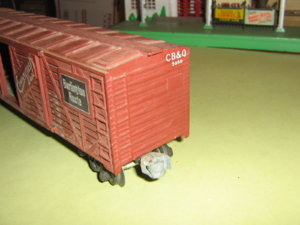 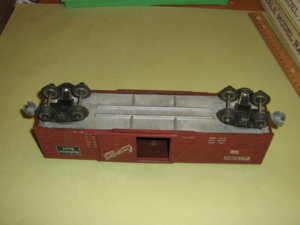 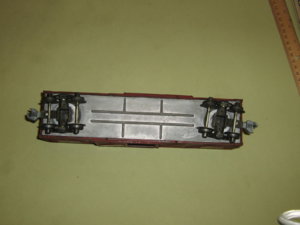 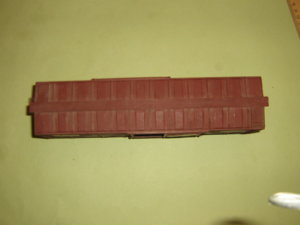 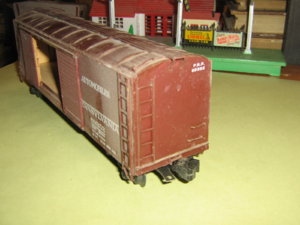 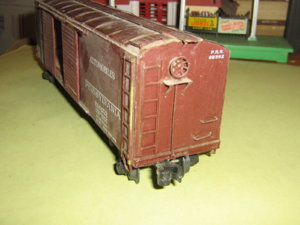 Staff member
The Burlington stock car is Lionel.
The Penn car is a kit, but I cannot recognize, the wheels have a lionel look to them, but the frames and couplers do not?

Lionel is a manufacturer.

O is the scale, of which there are many manufacturers. Lionel is the largest producer of O.

Lionel makes both O and HO, but they (Lionel) are widely know for O. Lionel has made predominantly O, but has made and is once again making HO products.
F

I was under impression that O-scale and Lionel were incompatible, that the O-scale cars would not run (work) on Lionel, because the wheel width is different...
E

I had a friend once who was an O scaler, and he took great pains to point out to everyone that there is a big difference between O Gauge and O Scale. Your cars look to be either Lionel or Lionel compatible. Wheel profile (those Pizza cutter flanges) is a dead giveaway. Also look for one wheel being insulated on O scale wheelsets, where Lionel would not be (unnecessary because of that third rail). Talgo couplers are rarely seen on O scale stuff. *Edit* Some early O scale did use an outside pickup before two rail became popular. There was a wiper on the locomotives that contacted an outside the track conductor. I'm still betting Lionel.

O SCALE is accurately scaled to the prototype, with scale wheels and couplers, and runs on 2 rails, like the prototype.

O GAUGE is Lionel, with oversize wheels and couplers, and runs on 3 rails, unlike the prototype.

This is why I run O Scale 2-Rail equipment...for realism.

Hate to be the bringer of bad news but I am seeing much miss-information going on here. The thing called O is several things.

First is the track. Ninety-nine percent of things running on rails called "O" out there are O-Gauge. According to NMRA standards the width of the standard O-scale track is 1.25" which is 5 scale feet not 4' 8.5". That is why the track is generally called O-Gauge even if the trains running on it are scale. The only O-scale trains that run on O-scale track (1.177") are what NMRA classifies as a Fine Scale and calls Proto:48. Lionel, MTH, Atlas, Rail King, Williams, K-Line, Marx, Weaver, and the old AHM all run on O-gauge track. The only vendors (I know of) of true O-scale track are American Switch and Signal and Red Cliff Miniatures. 99% of people running on true O-scale track have hand laid it. The number of rails is irrelevant to the gauge.

There are differences in track for the more toyish trains such that have wheels with the deep flanges so they are easier to put on the track and can navigate tighter curves, and there for have to have taller rails. Generally the toy track is called tinplate or high rail track. This might be the better designation for us to use. Most -- not all -- non-battery powered High Rail trains also run on center third rail track to eliminate the reversing loop issues that plague 2 rail, and 3rd rail external type track layouts. Even using High Rail as a distinction to designate something as scale or gauge isn't really fair, because both HO and N ran on some pretty high rail as their standard for decades.

In the toy train world there are two major sizes of models. Standard O and O-27. Standard O follows fairly close to normal O-scale sizes of things. O-27 models are selectively compressed models to fit around O-27 curves. The 27 is the diameter of the circle. Standard O is also called O-31. Lionel also introduced larger sized curves for their more prototypical offerings first was "super O" which has a 72 inch diameter. In 1979 it introduced O-54 as a compromise between the standard O-31 and the unwieldy O-72. The issue at the time appears to be a new model of the Fairbanks Morris Trainmaster locomotive that wouldn't work on the O-31. Now a days there are more curve sizes than one can shake a stick at.

Coupler size - another red hearing. The unprototypical size of a coupler cannot be used as gauge as to whether something is called a scale or a gauge. The biggest example is the grossly oversized but ubiquitous Kadee #5. Probably used on 90% of the HO trains out there but still called HO-scale.

Finally in the O-gauge world the adherence to prototypical size is as varied as shades of green. Lionel had some amazingly correctly scaled equipment back in the 1950s. In contrast the import company Oriental made some really compromised (selectively compressed) brass models in that same time period. Now the Lionel company has many lines of products that range from the consumer mass markets junk to some really exquisite models that give a good showing against some brass models. This is no different than the various lines of HO scale equipment from Atlas, Athearn, Bachmann, Walthers. Same manufacturer totally different qualities of product.

The bottom line is we generalize and throw around terms where, when reading, we must be careful understand the context, and when writing be certain to clarify the context, or we are easily misunderstood.

I hated the non-prototypical look of the late 1960s and 1970s Lionel equipment, but when I got some I found it was sooo much fun to play with compared to my hard to wire HO stuff. Multiple trains, bells, whistles, fantastic track plans in a small space, all with just two wires to the rails.

Most manufacturers of O make items comparable to Lionel's traditional scale. Williams by Bachmann calls it Semi-Scale. MTH has their Rail King line and it goes on and on.

The term O gauge has been used to encapsulate all the different items available in O.

Thought I got a great bargain on 3 of these these Lionel-compatible passenger cars, at the auction, until I got home and discovered 4 of 6 couplers were broken. The truck-couplers appear to be of pewter or some pewter-plastic combination. If you ever see any of these Rail King's for sale, be sure to check the trucks! 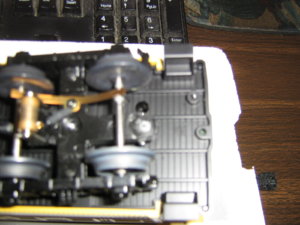 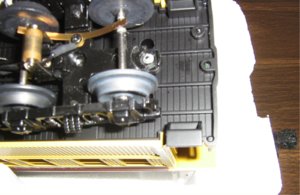 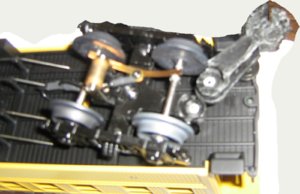 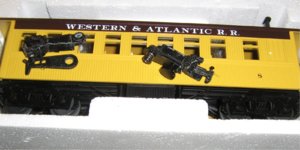 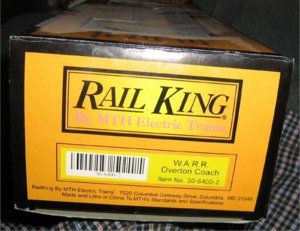 More (better) pictures (from previous message) ...Anybody have any suggestions on what to do with these guys besides wrap them up for Thursday morning trash pick-up?

I can't believe how brittle the pewter or whatever it is, was. The coupler crumbles apart when you put small pressure on it. Maybe there is some corrosive chemical in the air in my house. If so, the Coronavirus doesn't stand a chance! 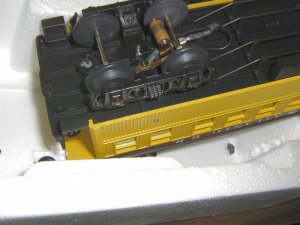 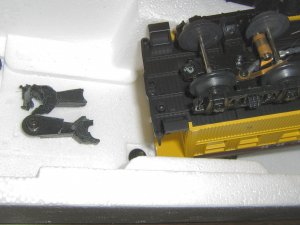 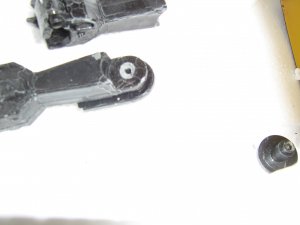 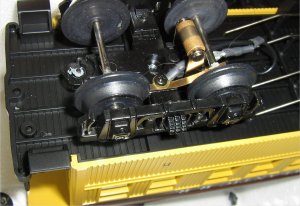 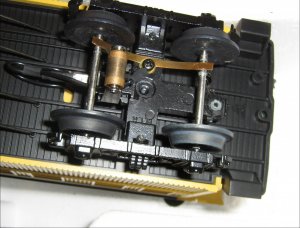 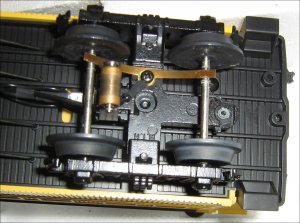 I thought about measuring the distance between the rails, but there is an easier way. The wheels made of metal must be isolated from each other. It is harder to do if the truck is made of metal.


The couplers are aging, over 40 years. One picture shows hair line cracks all over the coupler.

Dub said:
The wheels made of metal must be isolated from each other.
Click to expand...

They don't if they are running on three rail track because both outside rails are the same polarity, so the wheels and axle can all be metal. They only have to be isolated from the center rail roller, which as you said IS harder to do if the truck is metal.
You must log in or register to reply here.
Share:
Facebook Twitter Reddit Pinterest Tumblr WhatsApp Email Link