I have a pair of Athearn Genesis F3s fresh off the boat -so to speak... Both had problems with limited truck swing and I had to trim a bit off the brake cylinders and the pilots side steps.

The worst place was frequent derails on a number-8 curved switch. The switch is a Walth-Shinohara newly installed switch.

All my older Athearn Genesis F7s work fine and scores of GP7 and GP9s too. Even big 6-axle Atlas Train Masters breeze through!

My track and wheel gauge finds no issues. The F3's trucks seem to pivot OK.

So, has anyone had the same problem with these new F3s?

Staff member
I've had similar issues with other Genesis F units. A very close examination found the top edge of one sideframe was getting caught on the frame when it was rotating. I carefully trimmed the inner edge of the sideframe so it would slide, instead of catch.

My unit doesn't have that problem (yet anyway) but every now and then it stalls and goes thru every sound on the list. Gets a little annoying after a while.
R

Rico said:
My unit doesn't have that problem (yet anyway) but every now and then it stalls and goes thru every sound on the list. Gets a little annoying after a while.
Click to expand...

To heck with sound and DCC! Give me the old blue box F-7's for reliability on all sorts of trackwork!

I'm with you trailrider. I do happen to have a Genisis (first edition) F-7, DC only and it is a fine running locomotive.
R

Sorry to throw a cat among the pigeons but Yuk! Bluebox F7's look like they were carved from a block of soap; they are 1950's tooling and look it; windshield looked grossly over sized and had square corners, the side air gills had no detail and were crude - number boards the same. As soon as Stewart came out with their much nicer looking F series in the late 1980's, my old blue box got sold off mui pronto!

If someone is interested in a super FINE running F7 that has good looks AND reliabilty, get a Stewart/KATO F7A (or F3A or F9A). Those puppies purr like kittens and run silky smooth, and the shell looks quite good, even if not up to Genesis level (based on the Highliner tooled shell which is considered the pinnicle of HO F unit shells).

In my humble opinion, the perfect F7 in HO would be a Genesis F7 shell on a Stewart/KATO drive. Looks and best F unit drive ever made.
Last edited by a moderator: Aug 11, 2016

They may look like they were crude, but with a little bit of work, they can be made to look good. This unit started off as an undecorated unit. It was remotored with a can motor, all electrical was hard wired, N/S wheels installed and constant lighting was also installed. A few details were also added. This was done around 25 years ago because at the time no Northern Pacific units were available. It has been beat up a bit over the years but still runs as good as any now modern offerings.

Chet, looks like you did a fine job painting that NP F unit - not an easy job

Nothing runs as good as the KATO powered Stewarts; even with the very nicely painted Genesis F9's and F3's I have, I kept 10 of my Stewart F7's because of their drives which are 2nd to none.

It's the windshields that have always been my biggest beef with the old Globe Athearn blue box shell; American Ltd did come up with a kit to improve them; IIRC it basically filled in the giant opening and framed a more prototypical opening for which the windshield. They also made a standard glass insert but if you used the other kit, it look tons better.

The Kato drives are second to none. My Alco fleet is all Kato drive units, first edition when they first came out some time in the 90's. They still run like new. I had looked at the Stewart F units, but I already had my Alcos all custom painted and detailed. The Athearn Genesis locomotives do have a little bit better detail than the original earlier Athearn locomotives. I picked up 2 A units and a B for my North Coast Limited. They are excellent, smooth running locomotives. 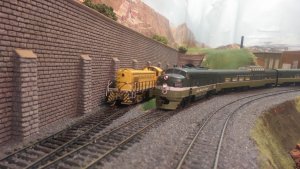 Unfortunately, I don't run the entire train. Just us one A unit and a few coaches and dome cars for my tourist train. It waas the only excuse I could think of to have the NP train on my layout. I do use a few "leased" NP passenger cars and and RDC for a local passenger train.
R