Did the Milwaukee Road ever use F-units on the Hiawatha and other passenger trains in the 1950's? I've had two LifeLike/Proto2000 E-7 models break down. Not the first time, regardless of road. Intermountain shows a number of Milwaukee Road FT's, F7's and FP7's (which may or may not be available until later this year). Did the prototype every use these on passenger trains in the 1950's period?
M

Milwaukee Road used FP7's on the Hiawathas in the 50's..........in fact, the FPs came in with the '52 orange and maroon paint scheme. Never say never, but they never used any other F units on the Hiawathas that I've seen. I believe they had some FTs with steam generators but they were mainly used as backups.
T

Much obliged! Have to see when I can get an Intermountain FP7A-F7B set. I'd prefer the '52 pain scheme, as I have the Sky Dome observation car, the full-dome, and a heavy-weight baggage car in that paint scheme. I also have some Con-Cor passenger cars in the later UP yellow and gray scheme with the Milwaukee Road lettering. I suppose I can run the mixed consist as being around 1956 or so. As my Milwaukee Road train is "down the list" from most of my roads, C.B.&Q., NP, GN and a single Santa Fe switcher (in the Denver yard), I can wait for the Intermountain FP to be available.
Thanks, again!

I rode on the Hiawatha in the 50's when I was a kid. Loved the Sky Dome car. I can't recall if I ever saw a FP7A at the head end. When we left, Joes were at the head end and I do remember the Erie Builts and E units taking over at Harlowtown. I didn't really pay that much attention being a kid, but I imagine that F units could have been on the head end too. Here's a neat picture taken at Deer Lodge a couple of years ago of a restored E unit. 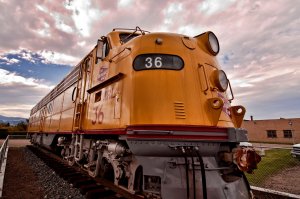 I have to ask a question here. Which Hiawatha are you trying to model? The Olympian Hiawatha, the Morning Hiawatha, Afternoon Hiawatha?

What was the nature of the Proto breakdowns?
M

Did some looking thru my books and the loco consists are as clear as mud............basically if they had it, they ran it, so you find E7A, E8A, E8B, F7B, FP7, And Erie Builts in all kinds of combinations. I found E8A, E8B, FP7; E8A, F7B, FP7: FP7 , Erie Built booster, FP7; E8A,F7B,E8A as well as traditional FP7, F7B, FP7; E8A, E8B, E8A; ect........basically mix them any way you want. And I found multiple references for GP9s used between Othello and Avery (the gap). The Electrics were normal power between Hawlowtown and the coast, but I also found references to the Erie Builts and FP7s running from Minneapolis all the way to the coast.

I also found quite a few pics from 1956 of Olympian Hiawathas with mixed UP/orange and maroon trains, so you can run your mixed consist and be prototypical Trailrider
T

photoman475 said:
I have to ask a question here. Which Hiawatha are you trying to model? The Olympian Hiawatha, the Morning Hiawatha, Afternoon Hiawatha?

To be honest, I'm not sure. I rode some Hiawatha from (IIRC) Madison, WI, to Chicago a few times when my boarding prep school got out for holiday vacations between 1956 and 1960. I honestly don't recall the paint schemes on the trains at that time period. Probably was the later "UP" yellow and gray, but I vaguely recall seeing the orange with the wide brown stripe on a train I rode to visit an aunt in the Wisconsin Dells when I was younger. I bought the Skydome observation car off e-bay, along with a Super Dome like the one I rode in from school. Both are in the Hiawatha scheme, and, while I also bought a few Con-Cor cars in yellow and gray (the Hiawatha scheme was cancelled for lack of interest!!), I probably won't run them much. I just received the Intermountain FP7A and F7B. I bought them both without sound, but they run on DCC. The headlight and Mars light are controllable from the MRC Tech 6 6.0, though the Mars light doesn't blink. I have a few sound equipped trains, and for the $200 I saved on the non-sound units, that's fine. They run like a fine Swiss watch!
T

thaddeusthudpucker said:
What was the nature of the Proto breakdowns?
Click to expand...

The one unit had been running fine, when all of a sudden it refused to run more than about three-quarters of a turn forward or backward, and then stalled. I disassembled the unit to the point that I could try to turn the motor by hand, and did NOT feel any resistance when turning the motor (by the flywheels), but the beast just wouldn't run. The sound module worked fine regardless. Don't know if there is something electronic that is bad or what! I didn't take it down to the point where I could determine if there are cracked axles or some other problem in the drive train. I did remove one drive shaft to see if that solved the problem, but it didn't! This unit had previously broken down and I had a professional rebuild it several years ago, but didn't run it much as I hadn't obtained the cars.

He also rebuilt the second unit (DCC but no sound). This one runs okay, but the frame is different and sufficiently narrow that the trucks won't swivel enough to make it around two points on the layout. The first unit does NOT experience that problem, however. I don't have the time or patience to further troubleshoot these units. The "logical" thing would probably be to completely disassemble both units and see if I can "cannonball" (canibalize) two of them into one working unit. Both now reside in a storage drawer. I had problems with two other DCC Proto2000 that the gentleman fixed. So far, they are still working and make it around 18" curves without problem. Keeping my fingers crossed, as one is my E5 created from an E6. Sound is nice...but I'd rather have reliability than bells and whistles!
P

Photoman475-
Much obliged! My Intermountain FP7A/F7B in DCC but without sound arrived, and work beautifully. The only objection I have is that neither unit has any instructions, other than changing CV's for sound equipped units, which, of course, I do NOT have (purposely). Included as separate tiny packages were some plastic parts which I presume are to go somewhere on the ends, but I can't figure out where. The couplers are already mounted. The front coupler pilot doors are included separately, and I'll probably mount them in the open position. Also included are winterization hatches, but I'm not sure which fan they are supposed to cover. I think it is the rear one, but can't locate any photos. May just leave them off. Also, I need to attach the tiny, delicate windshield wipers to the cab windows. If I break one or both, they will be replaced by homemade wire ones. I really like Intermountain's F-units. I have another FP7A/F7B set with sound in Raymond Loewy NP North Coast Ltd green, which I run with my shortened version of that train. Depending on what geographic locale I am imagining, I can also hook up my C.B.& Q. E-units to the Ltd or the Empire Builder, for runing between Chicago (off layout) and St. Paul. Love these post-WWII northern & midwest roads!
P

Those MILW Fs that had winterization hatches had them over the last fan. Here's a link you can check out:

The RR Picture Archive site is great for finding photos to answer questions like this. It also has freight and passenger car photos.