I have been wanting to start my switcher junkyard for a long time now. Well with the garage now built, I started building the bench work today. I have four 4' X 6' sections and one 4' X 6' that will be rounded. Right now the height is 44" high once the plywood gets put on tomorrow, but I'm thinking about lowering that another 4". So here's today's progress shots. 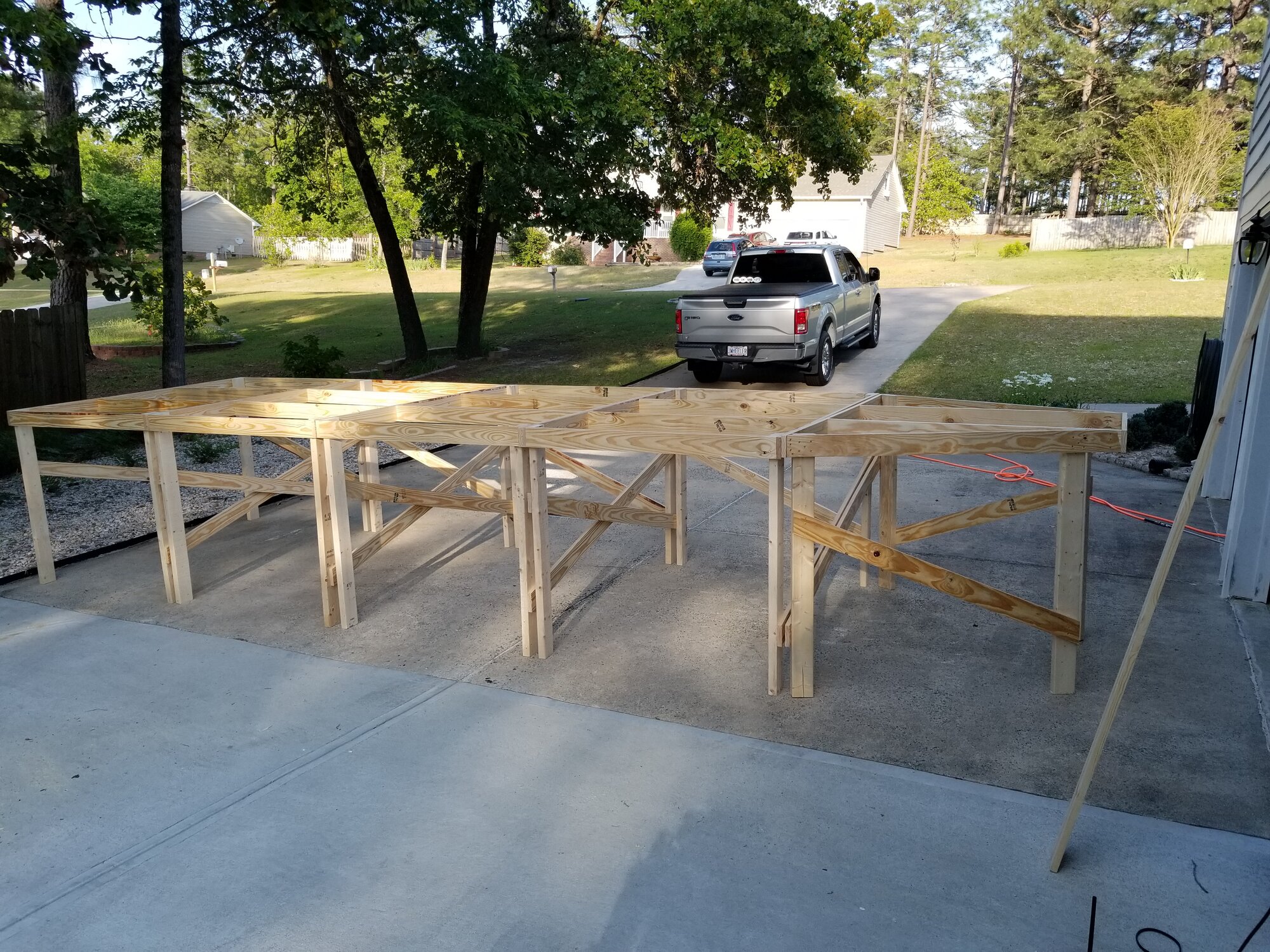 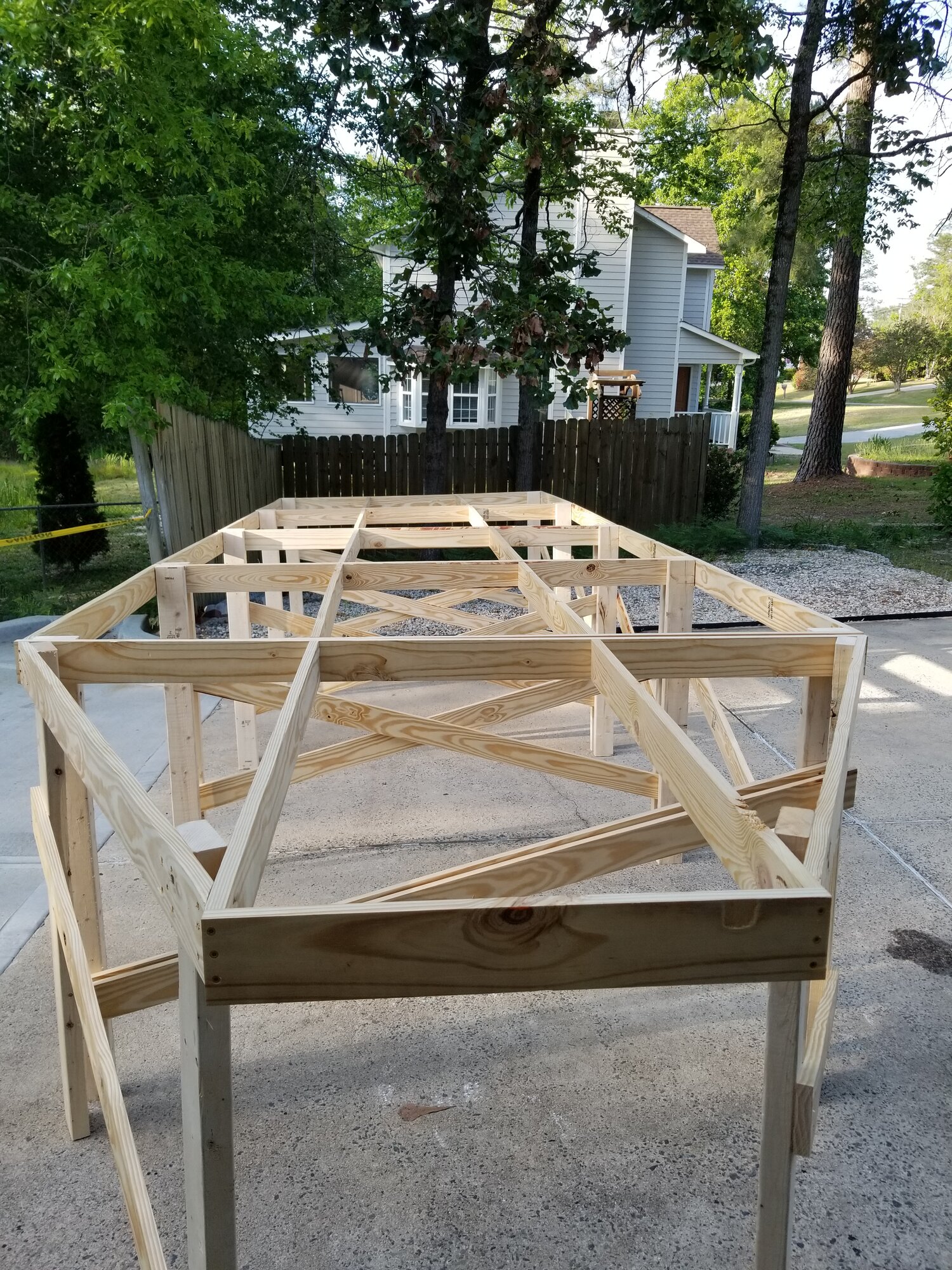 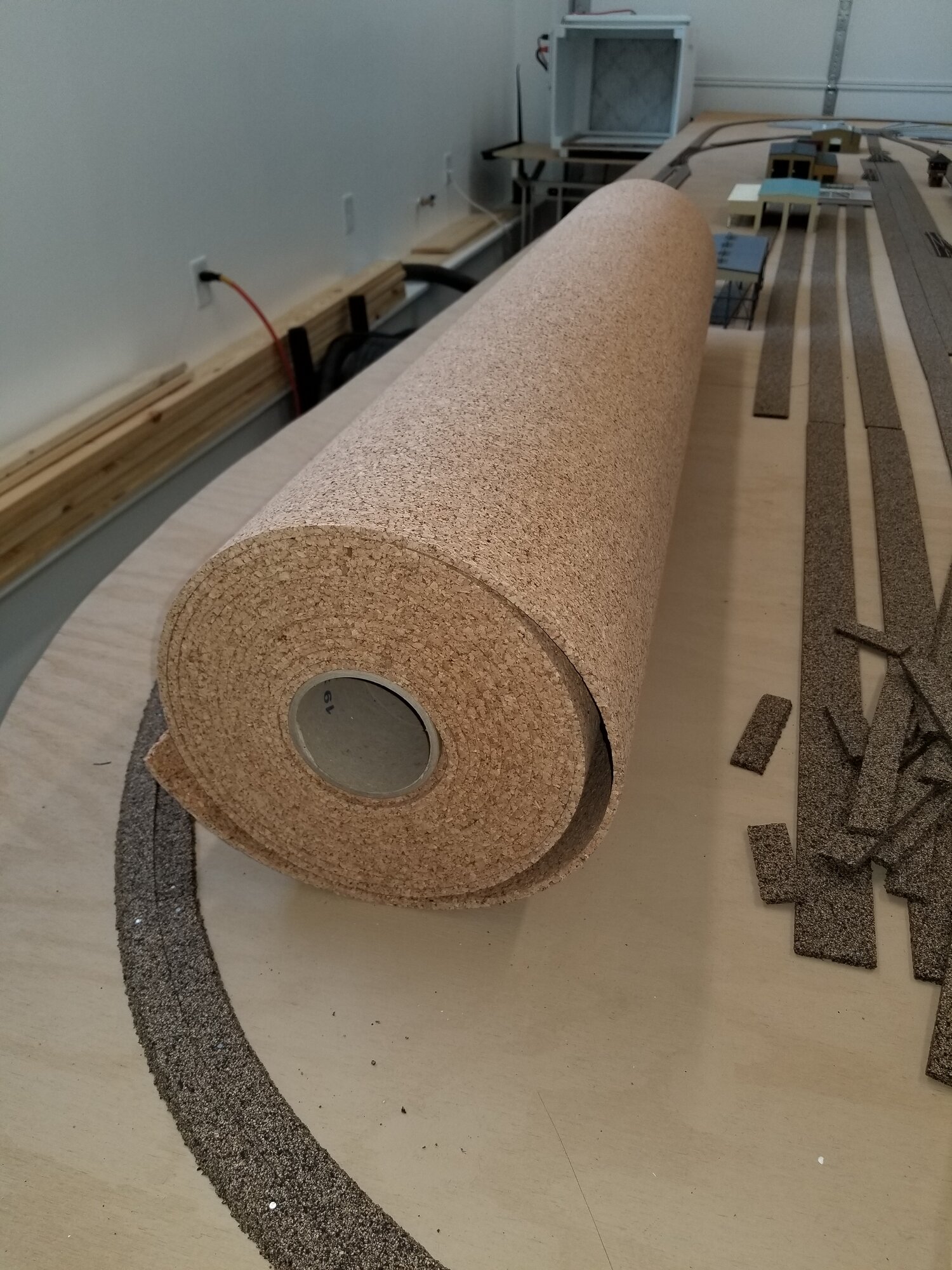 OK. I guess that's the permission I needed..So
1) I still say you will have a tough tough time reaching across (unless you're meaning to split it in half later)..But from the trackage and all I don't think you're intending to do that..
2) With all that space I'd have angled the trackage so as to not be following the rectangular edges of the top.
3) Not sure if cutting a rectangle in the ply for the diorama to go down into was mentioned..If new track doesn't line up with its tracks it'd be simple to realign the new track to match up.
4) All your structures look very good..Not so for the Atlas turntable..In fact if you're going all diesel you don't even need a TT; just a runaround track or two; especially if your going to have only one or two small switchers working the scene. Passenger train yards use TTs to reverse locos so as to be pointing forward. And cars without flip over seat-backs need to turn cars (Though this was probably more prominent 40 yrs ago)..
All in all I think you're going to have an enviable MRR once the along the wall portion is in...

How ironic ! The post above was mine from yesterday..But I had left out that it's best to lay a sheet of cork for the whole yard instead of individual cork under each track.. And here you are, doing just that today !!! I guess you realise/d that yard track is mostly right on the ground with ballast, but not shouldered; especially the ladder tracks.. And the cool thing is if it's the same thickness as the main line cork it becomes so easy to make the transition from the shouldered main into the yard ! M

Last edited: May 24, 2020
Ok, all good points and much appreciated advice. I will probably tear the diorama apart as suggested earlier. It is just being a pain in my butt to get it fit in. One thing you are missing, A Switcher Junkyard. 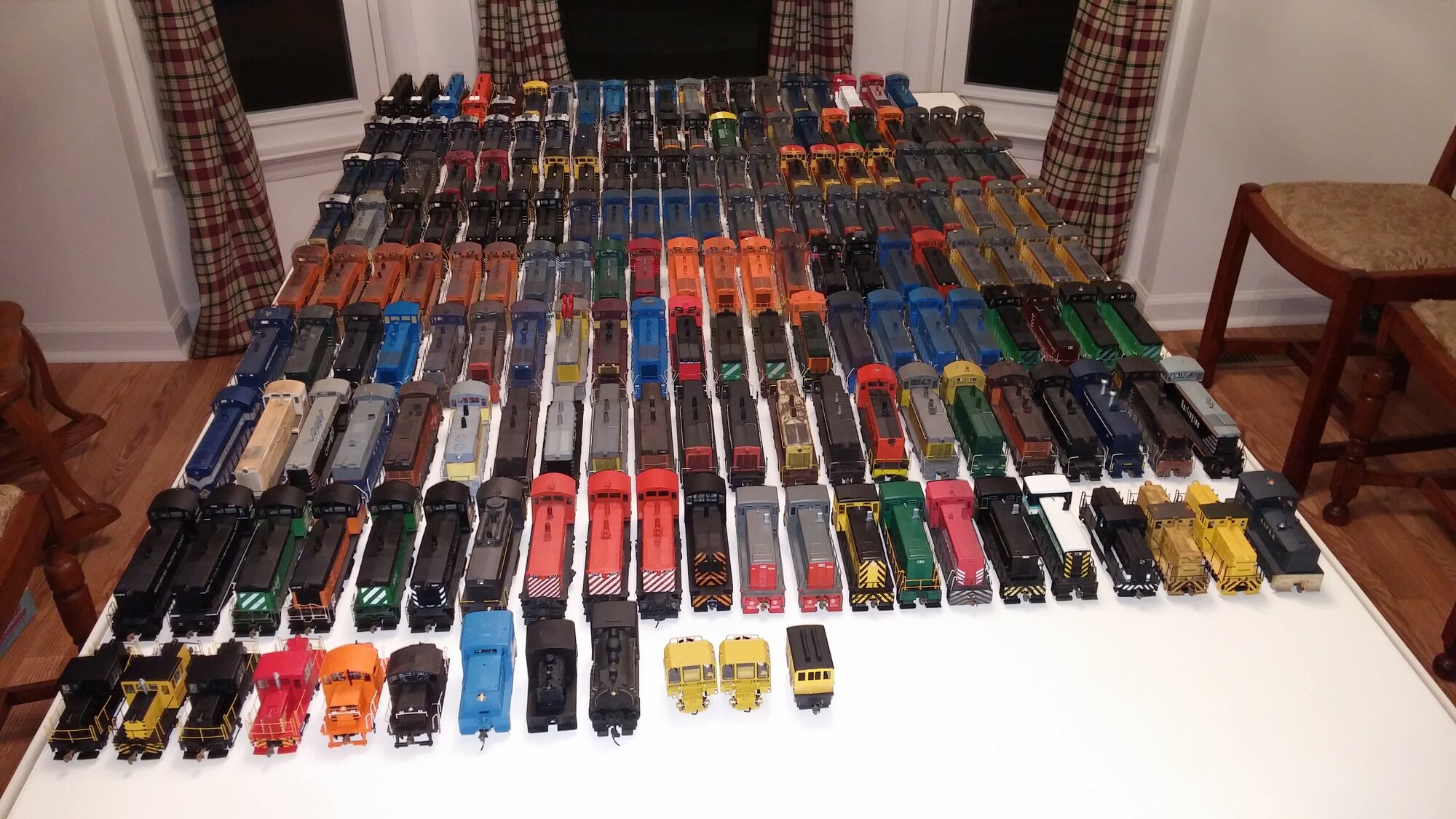 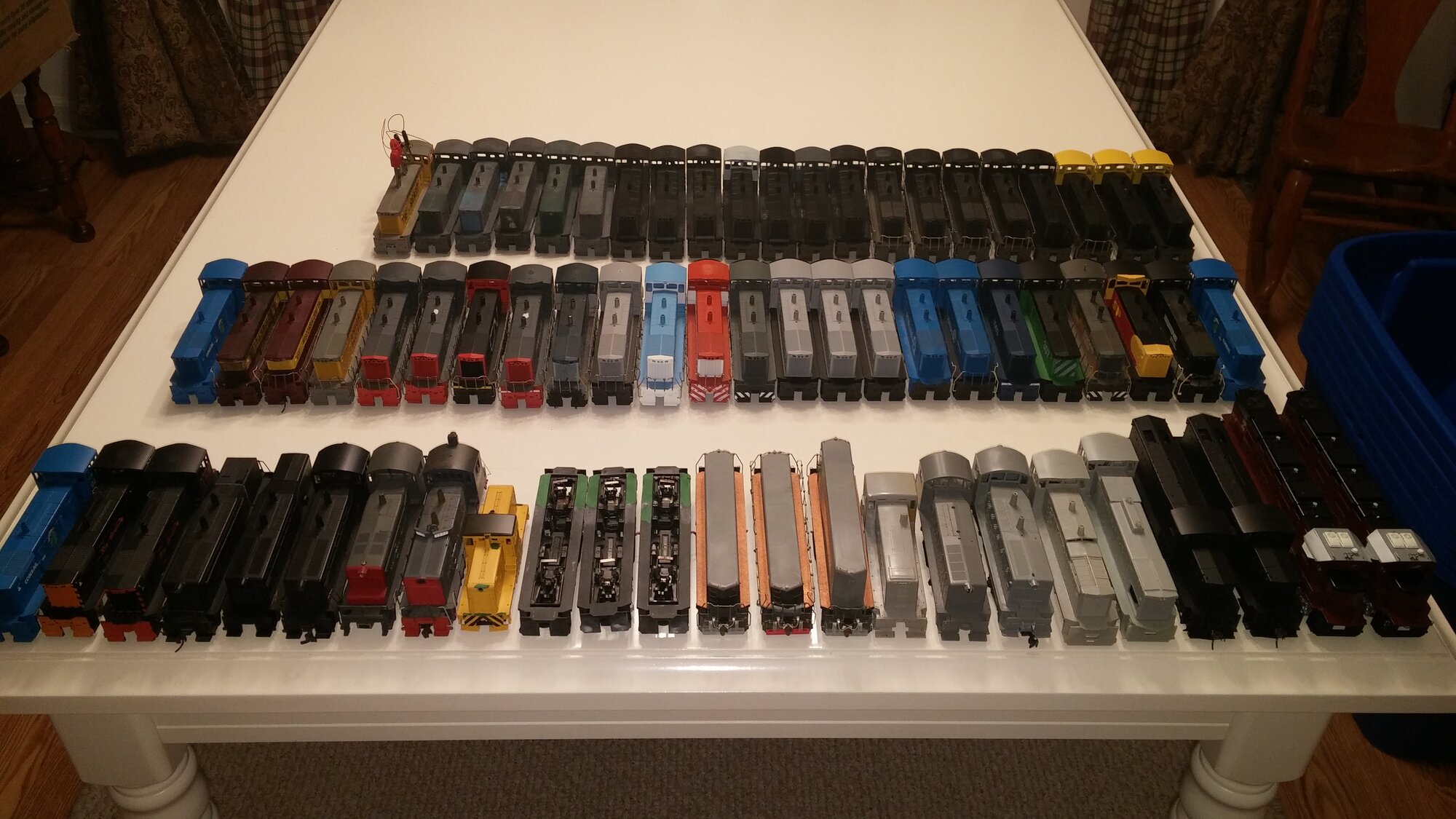 Think of LTEX in Ohio or NRE in Silvis Illinois

White glue for the cork.

Now maybe all of these long dead end tracks make sense??!! Half powered, half dummy. Just sitting on deadline tracks either waiting for purchase/rebuild/scraping etc etc. I did a piece with staples came out pretty good. Ballast/concrete/dirt road should hide all of the staples. 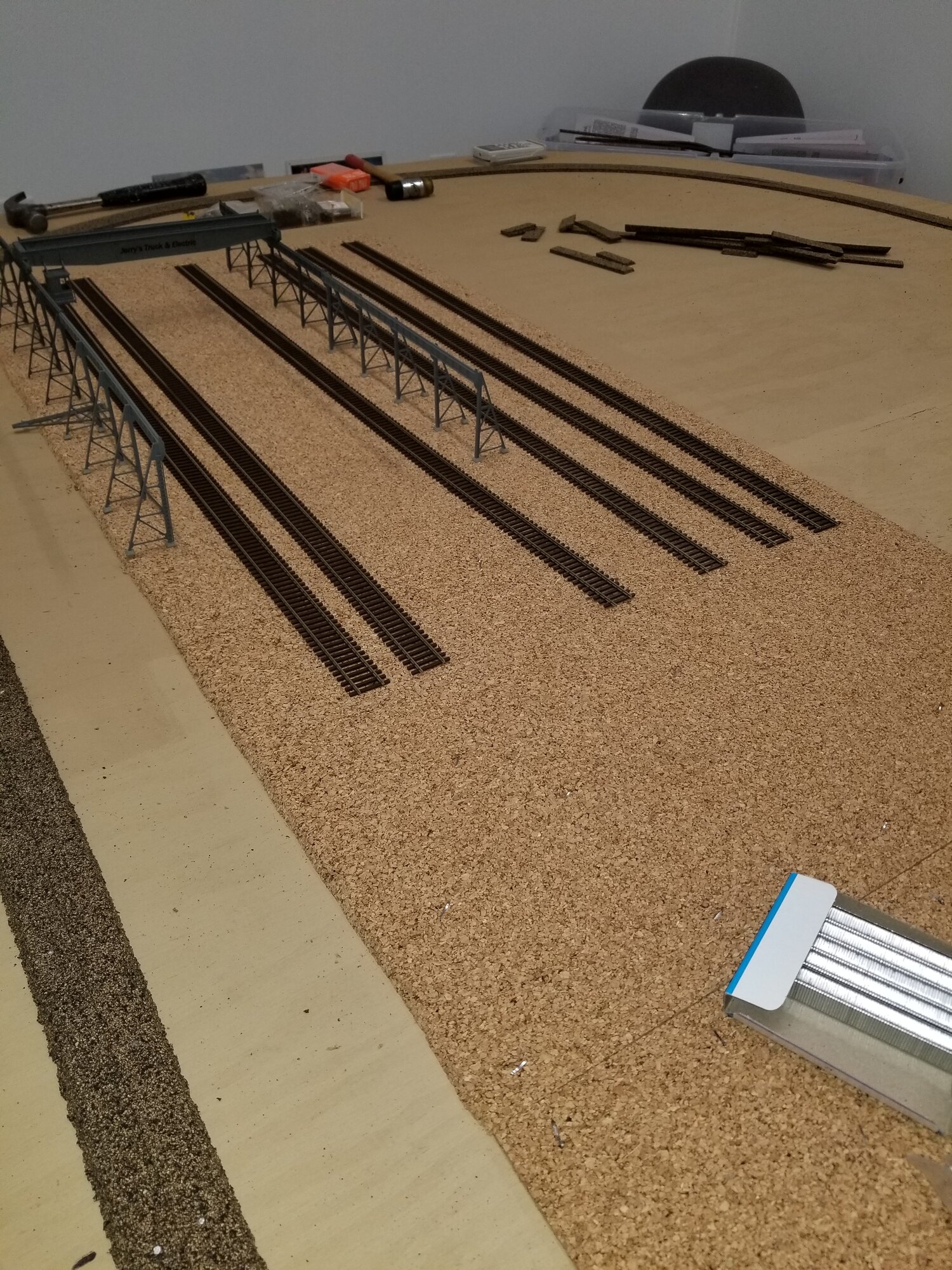 Ok 2/3s of the layout is corked. Laid the track out to see how it all looks, not to bad to me.

The last 1/3 needs a lot of figuring out. First I will take the Allied Rail Rebuilders diorama apart tomorrow and see if I can't figure where to fit all of the older structures in. 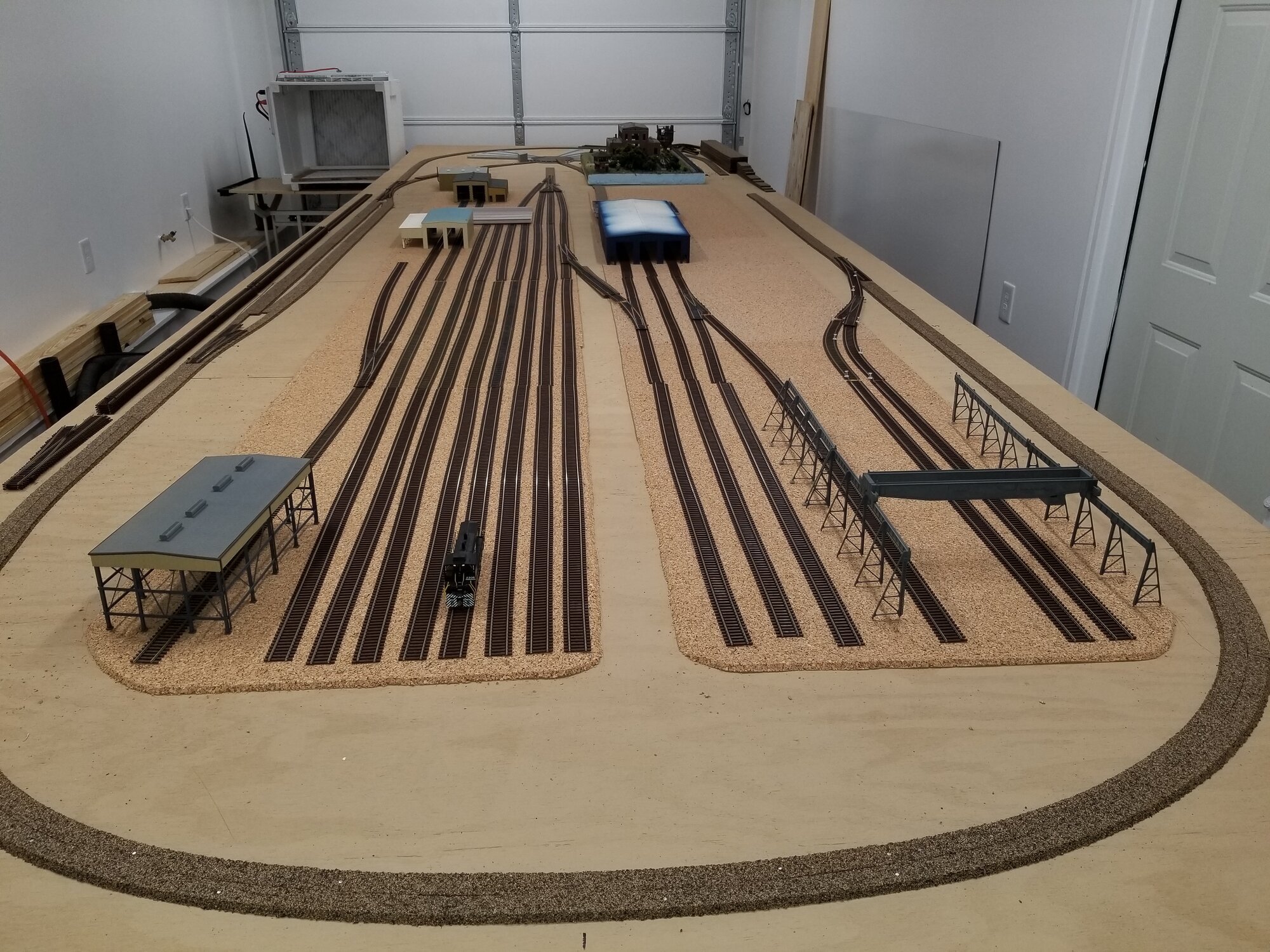 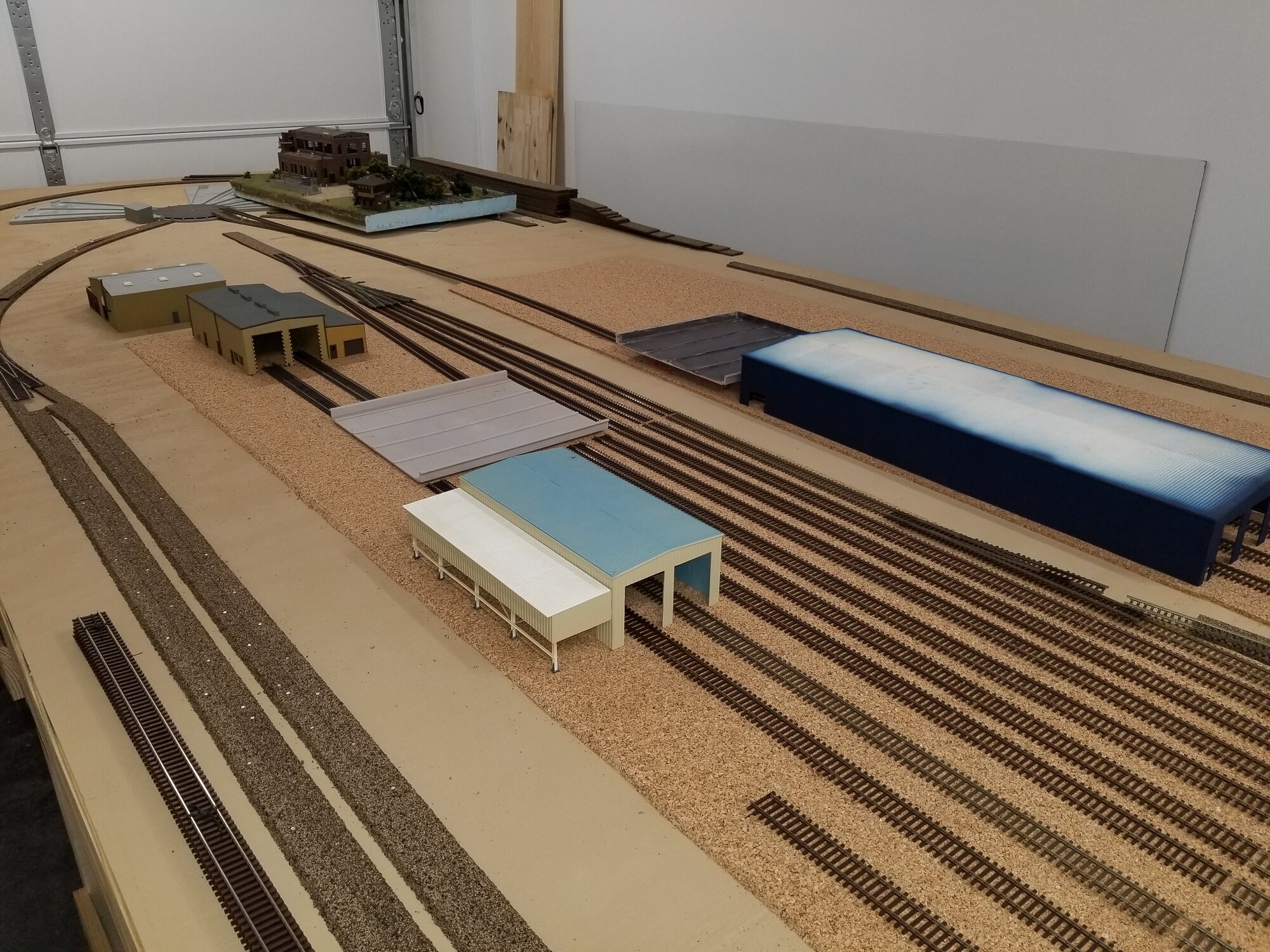 The last 1/3 needs a lot of figuring out. First I will take the Allied Rail Rebuilders diorama apart tomorrow and see if I can't figure where to fit all of the older structures in.

Jerome if you have not permanently laid any track....spray paint the cork......

I did this on my old layout when I was in Arkansas....plan to do it again my new layout I am doing now......see ppics not the best pics because it was taken in 1992 with a Sony Mavica 3.5 disk drive camera lol. This what it looked like before ballast, I used plain old grey primer then I used Fleckstone and the added ballast. This time I think I will just use primer then ballast.

Last edited: May 23, 2020
James, no the track is just laying there for now. Painting the cork a gray color is pretty clever!! Thank you for that tip.
Where did you purchase your cork from? That's a great price.

migalyto said:
Where did you purchase your cork from? That's a great price.
Click to expand...

I did a search on Amazon, this came up. Matches the regular cork roadbed we all use perfectly. 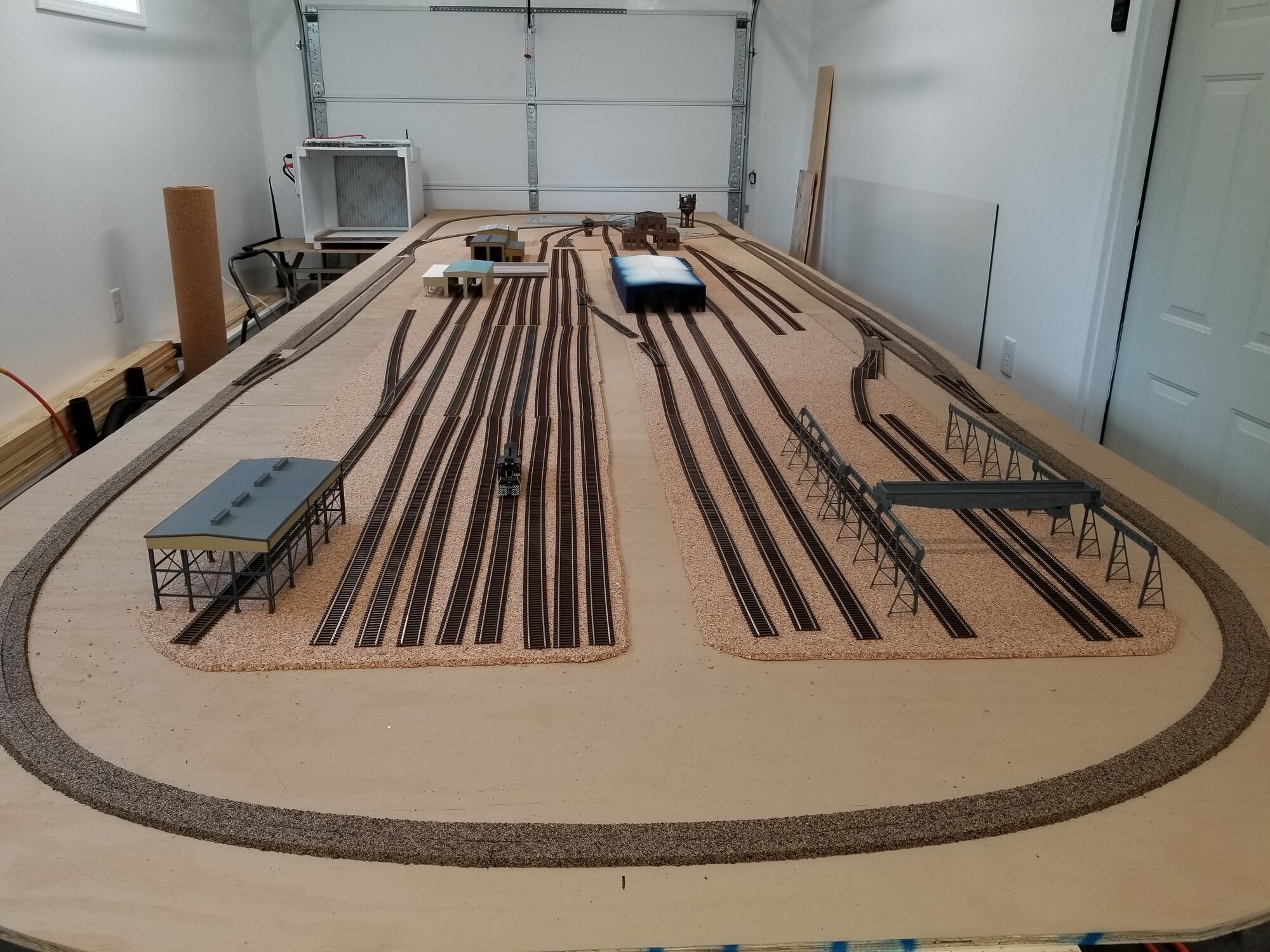 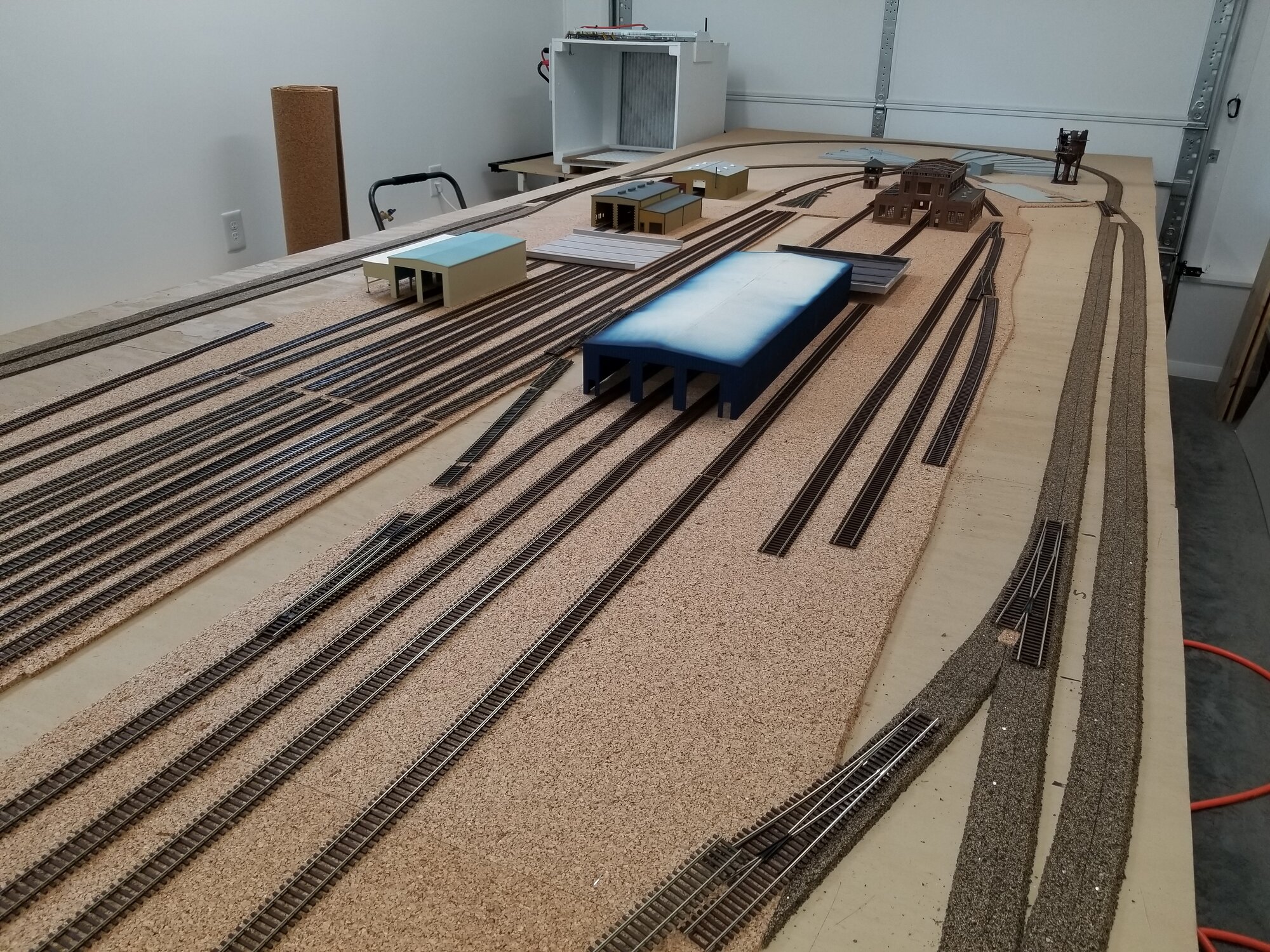 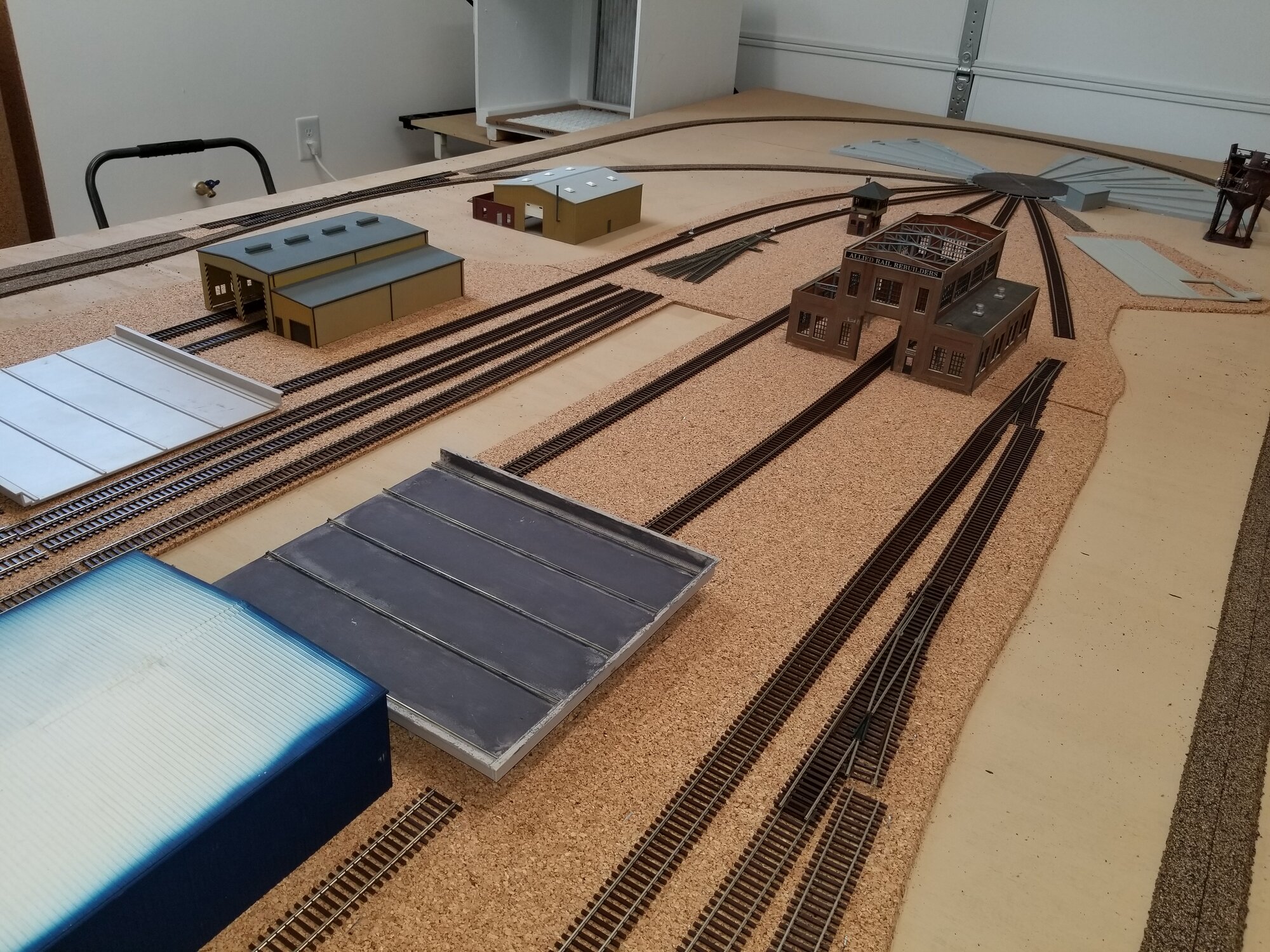 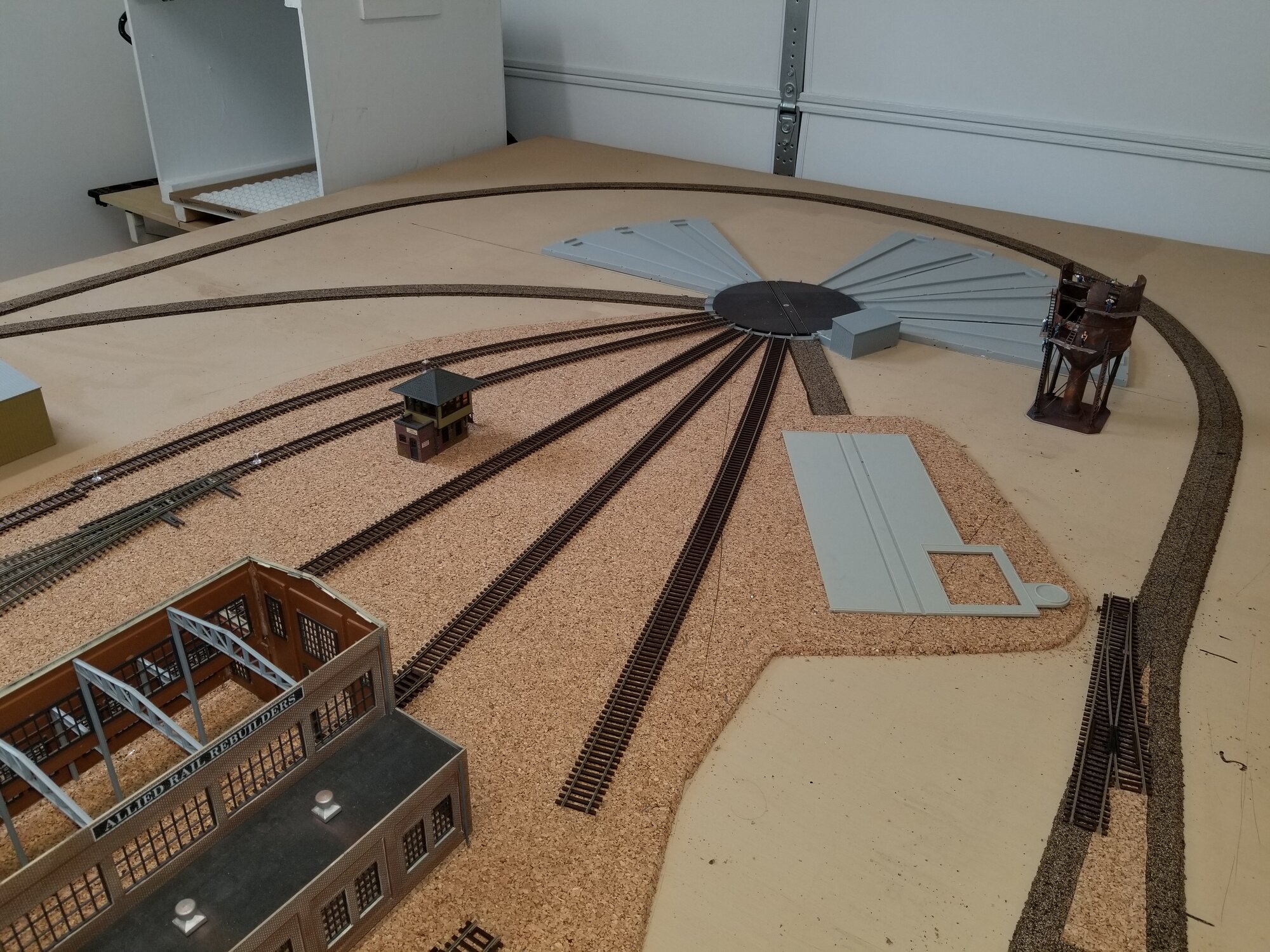 wheeler1963 said:
I have a set up I actually like now. I need to remove everything now so I can vacuum and paint the cork.

Very nice! Exciting times buddy! I think you got a good handle on this 2.0 version I really like it!
James, do you think I need to paint all of the top of the cork in the yard area or will the ballast cover it being that it's all flat?? 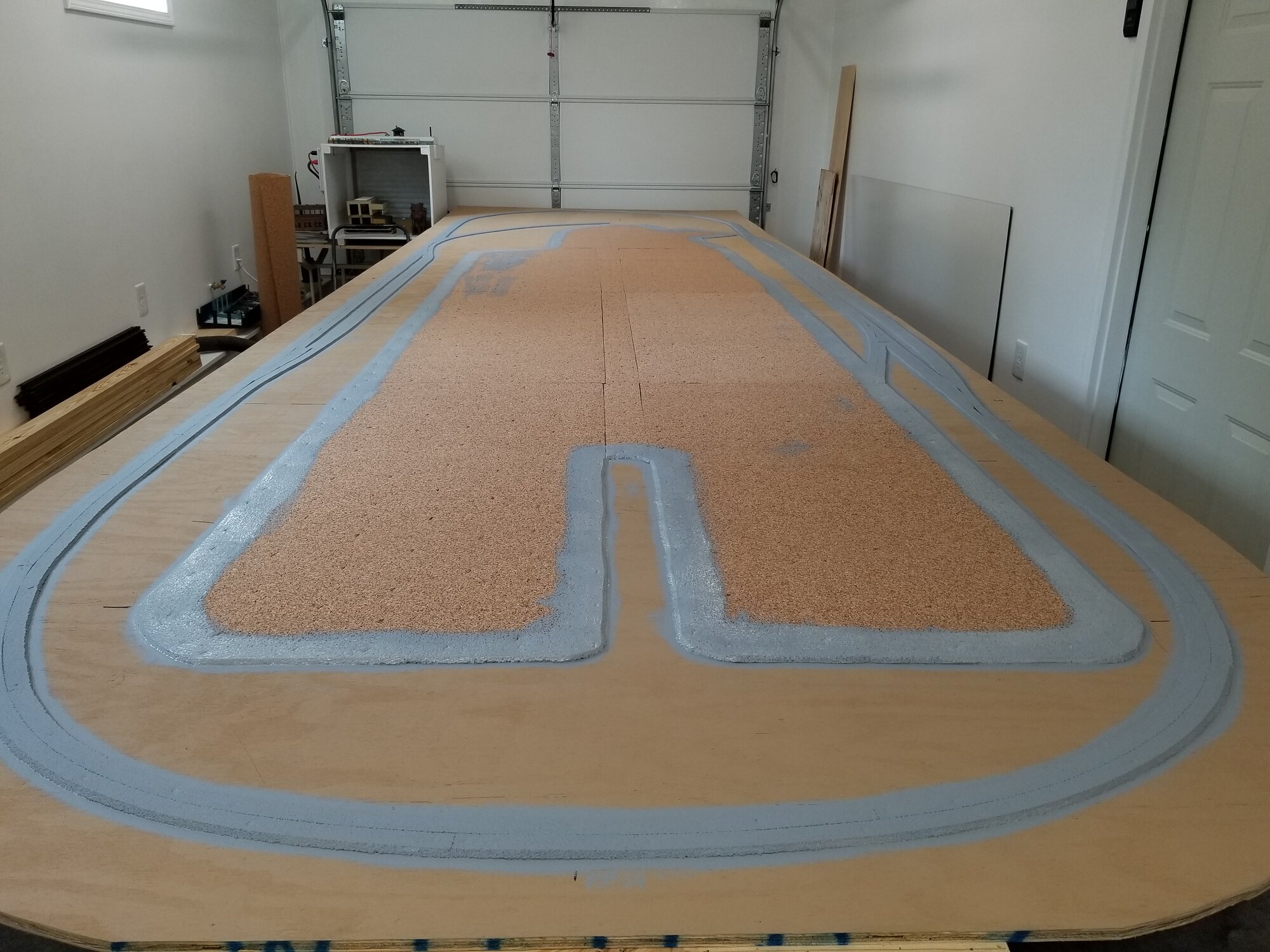 wheeler1963 said:
James, do you think I need to paint all of the top of the cork in the yard area or will the ballast cover it being that it's all flat??

Well that depends......if you want to show different types of ballast etc or just have variations. But if you are asking my opinion I would paint it with primer- flat colors grey or even some spots of rust red/brown.....the thing is seeing cork brown is annoying to me. I like to paint it then I or you can save a ton of material and cost on ballast. It will still turn out great.
James, sounds like a plan. A trip to Lowes tomorrow.
Well no train time today. The wife noticed that the down spouts were backing up with water the other day. So ok no biggie, disconnect one and flush it out right? Oh nooooo, after digging up the yard in 4 places, I found the problem. 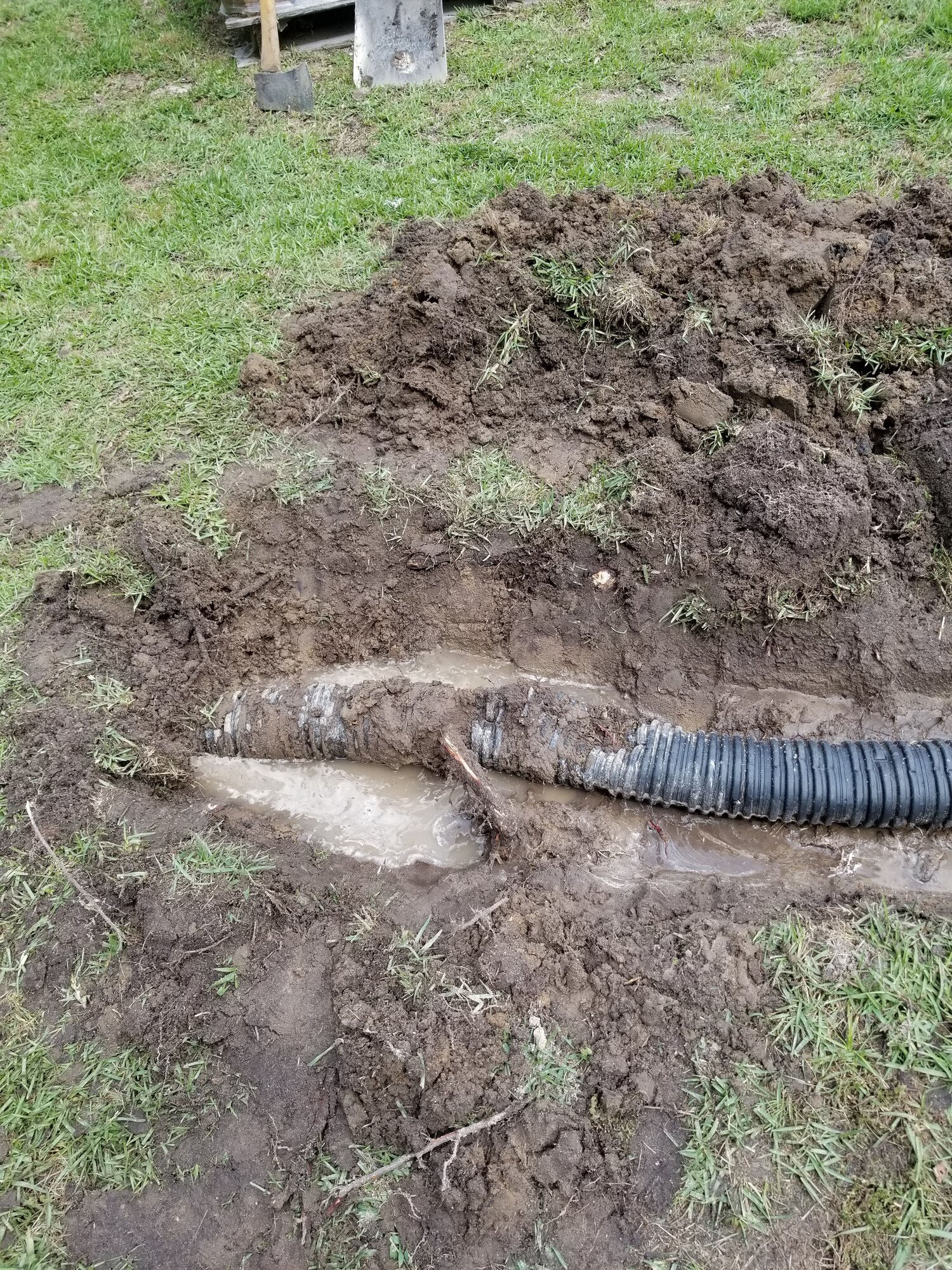 A crushed drain tile with a root growing in it. Major clog in the line. 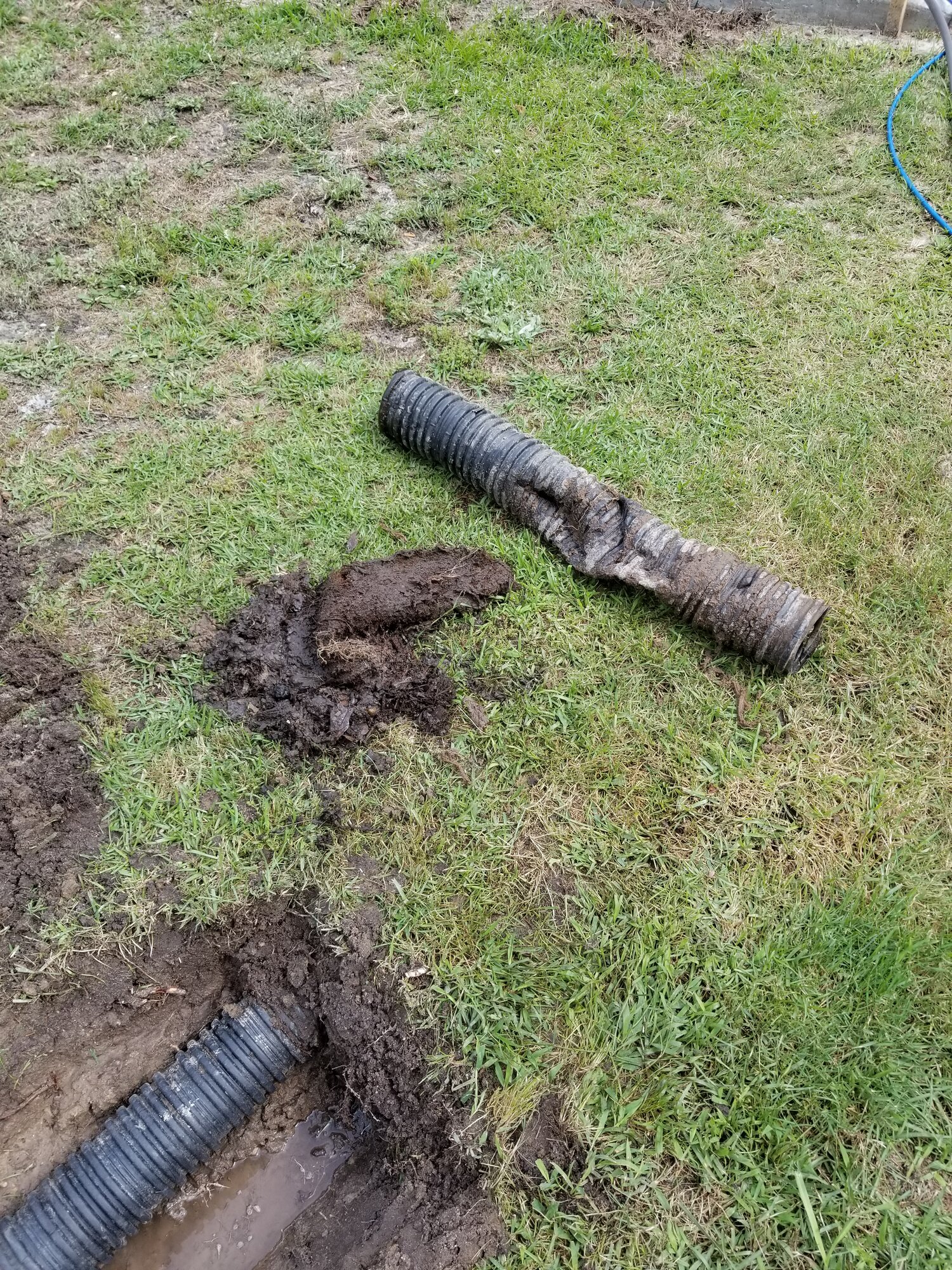 So that was my day in a nutshell. tomorrow I'll fill in all of the holes.
Jerome, your progress is amazing, so much done in such a short time.

wheeler1963 said:
Ok, all good points and much appreciated advice. I will probably tear the diorama apart as suggested earlier. It is just being a pain in my butt to get it fit in. One thing you are missing, A Switcher Junkyard.

Think of LTEX in Ohio or NRE in Silvis Illinois

Next question for you guys, attaching the cork sheets, staples or glue??
Click to expand...