Back last summer when I was just getting some knowledge of the layout world I heard something among the tumult about dinosaurs hidden on a layout as a 'thing' that was started by one of the legends in the hobby.

Anybody that could flesh that out for me that would be cool, I thought it was a neat idea!

That was on John Allens Gorre & Daphetid layout. Emma 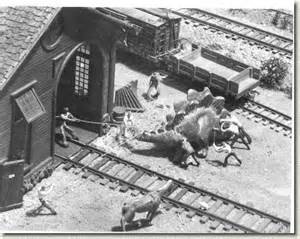 Tanks, it eluded me. What was the intent? Just a lark? An interesting thing that would 'jump' out at you as you looked closer at the scenery? Whatever, I'll be hiding one or two in the woods and maybe in the river, swamp or lake, I like the idea.

Anybody got any pics of one on their layout?

He had a few whimsical scenes in the layout. I did have the opportunity to have operated on his layout a number of times when I was stationed on instructor duty at Mare Island. What a layout.

John Allen originated the idea, and I have seen them on many other layouts in the last 25 years. Two public ones that come to mind are the old Lockheed-Martin club layout in Ft. Worth TX; and I recently saw this on the Foley Alabama Railroad Museum on their 60' x 22' O scale layout. There are several home layouts in the Dallas-Ft. Worth area with dinosaurs on them as well.
Wow Chet. Small world regarding John's layout. Did you by chance operate with Andy Sperandeo there? Andy was my "go-to" guy regarding ATSF operations.
Willie

Andy was never there when I was operating. I heard mention of him from John but we never got to meet.
T

I have a "dinosaur park" with a (what used to be called) brontosaurus at one end. Supposed, I guess, to be made out of concrete. I could have put a model of a Martin Matador missile (if I could find one), as is actually the case in a playground park in Littleton, Colorado, but thought the dino more whimsical. The park is across the tracks and down the street from an alley where four men are kneeling, one with hand raised. Of course, you can't see the dice in the guy's hand. But then neither can the cop directing traffic around the corner.

new guy said:
Anybody that could flesh that out for me that would be cool, I thought it was a neat idea!
Click to expand...

Emma isn't just a dinosaur, Emma is on the locomotive roster. I'm pretty certain dinosaurs existed on layouts long before John Allen. I know I had dinosaurs all over mine long before I ever heard about John Allen. But John is the one who made it a legitimate "thing" In the model railroading community. I guess it sort of helps to make a thing a "thing" when you are a professional photographer and writer.

See the 7th post down on this thread -
http://www.modelrailroadforums.com/...2-The-7-Wonders-of-the-Modelrailroading-World
Last edited by a moderator: Dec 11, 2015

Excellent! I'll be doing that for sure! Thanks again guys!
Y

I had a "Ymir" from Ray Harryhausen's "20 Million Miles to Earth" in the woods on my layout for a few years. The woods in back of the Bates Motel, and Addams family house that is.
W

Y3a said:
I had a "Ymir" from Ray Harryhausen's "20 Million Miles to Earth" in the woods on my layout for a few years. The woods in back of the Bates Motel, and Addams family house that is.
Click to expand...