I've started enjoying N-Scale model railroading about 18-19 months ago -- I guess it was a mid-life crisis or something. I've always been interested in N-Scale but never did anything about it it until recently. When I was younger, I had no money and no space. Then I had kids, no money, and no space, and the kids were young enough to not enjor and respect model railroads -- so we got them started with TOMY PLA-RAIL. I still have the kids (but they are pre-teen and teen aged now), and no space, but had a little bit of discretionary funds to start a new hobby in Dec 2017 . I concentrate exclusively on model railroading of Japanese trains and European (meaning mostly German/Swiss/Austrian area) trains. The Japanese trains, as my wife is from Japan and we go there about every other year to visit, and we ride lots of trains while there. So trains == vacation == fun times. The German area trains because I lived in Germany a few times in the 80s and early 90s, for about 4 total years, and have been back a few times since, and especially in the 80s for 2 years, I rode trains very regularly, and later I rode them for vacations and trips (living there early 90s again I had a car so did little rail travel but have done it in trips since). So the model railroading for me is due to the emotional attachments of the locations, memories, and current and future travels there. I respect and appreciate detailed modeling, and engage (and will engage) in modeling, but primarily, for me, the fun is in running the trains, and "just enough modeling" to evoke the location the trains are running in. As a "nerd", I also like the technical aspects, DCC, conversions, wiring, etc. so have done a lot with DCC conversions, designing a low cost light board, etc.

My current "layout" is a 4' x 8' frame covered with 1" x 4' x 8' blue foam insulation, and a green table cloth. It is mostly for learning about wiring, DCC control, running and testing trains (with a few buildings and other decorations put out). I am slowly working on a more permanent layout plan for the same physical space while I play with wiring and learn about it. Eventually we should move into a new house next year where there will be actual dedicated train space for a more detailed, and permanent layout.

I currently reside in Utah with my family, and work in the software engineering field.

Attached are a few of my trains. The Osaka Loop Line (Power Loop livery) JR 103 from Greenmax, the Hello Kitty JR 500 Shinkansen by Tomix (technically this is my daughter's), and some Fleischmann DB Regio (regional train) double decker passenger wagons from Germany (and a heavy hopper car from Fleischmann as well). 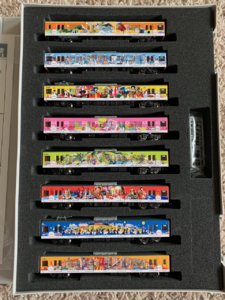 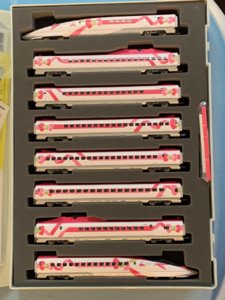 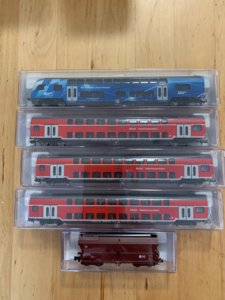 Welcome aboard chadbag. Pull up a chair and sit a spell. Lots of people here that are very helpful as your learning the ropes of DCC wiring etc. Nice Photos, we all like to see pictures of others work.

Staff member
CHADBAG -- Welcome to the Forum! Very nice INTRO there. I'm sure that you will enjoy the place, and be sure and visit the latest edition of "Running Bear Coffee Shop" in the ANPL section ... bring pictures (we like photos).

Welcome to the group Chad!

Welcome aboard the forum Chad. We've got a friendly bunch here and all are willing to answer questions if you have any.

Welcome to the forum Chad. You have an interesting collection of locomotives and cars there. I enjoyed riding the trains touring Europe when I was in the service back in the late 60's. Really got interested in the different equipment there. The National Train Show id in Salt Lake City in Julyand as close as it is, I was toying with the idea of attending, but other things came up.
You must log in or register to reply here.
Share:
Facebook Twitter Reddit Pinterest Tumblr WhatsApp Email Link