Well I've done it, really done it this time - irreparably ruined the appearance of my main line track!

It seemed so simple*: pour a teensy bit of ballast in between the ties, making sure that it did not go above tie-top level, wet it with alcohol and soak it with diluted Elmers. But somehow, some way, the ballast expanded (or floated up?) to cover the ties and the inner sides of the rails, and now it's ugly as sin!

I wish I didn't have to be here at the office, because I'm anxious to see if I can grind away the excess crap from the top and re-expose the ties. I don't have the time or money to rip out all this track and do everything over again!!! I figure if I'm really careful, I can use my Dremel with a wirebrush attachment to eliminate the excess; failing that, it looks like I have permanently relegated the Iron Belt to the realm of mediocrity

*I know, I know - "You shoulda read a HowTo book about it first." True, but I have this terrible habit of never cracking a book unless I actually have a question about something. That approach works for me 99% of the time...

Sorry that happened, Ken. It sounds like you didn't have the ballast soaked thru with the alcohol. Actually, I use "wet water" in a spray bottle and diluted Elmers to glue ballast. Maybe this will help. http://www.modelrailroadforums.com/forum/showthread.php?t=2964

The joy of ballast work. I hated it the first and second time around myself, hopefully I can figure it out the 3rd time!

Sorry to hear that Ken, i'm sure you can rescue the track, i have some that's been ballasted and taken up 3 times and it's still OK

CSX_road_slug said:
..... I don't have the time or money to rip out all this track and do everything over again!!! I figure if I'm really careful, I can use my Dremel with a wirebrush attachment to eliminate the excess;......
Click to expand...

Ken, My friend, If I may offer a couple of suggestions from my experience;

Be very careful if you do the dremel thing. It's very easy to melt the plastic clips holding the rail on your flextrack(and/or switches) . I know, been there, DONE THAT !! I have found in the past to take a regular screw-driver and scrape away the crap between the rails, if what you said is true(every thing floated up) you should have some loose ballast between the ties after you do this. You should be able to re spread this ballast and re-use it as well. Me being cheap, I would also re-sift the stuff you scrape away to re-use as well .

I have found that I prefer water vs. alchohol for my wetting agent. The key for me is to use warm water with a couple of drops of dish soap in an old PUMP hairspray bottle. These bottles produce a VERY fine mist and are less likely to disturb the ballast you just spent a lot of time on grooming!! When you do wet it down, WET IT DOWN, SOAK IT, I mean GET IT WET!!! Then for my the adhesive(I use matte-medium) mix- your elmer's with about 1/3 glue to 2/3's water , shake it well and add a couple of drops of dish soap to this as well.

When applying this mixture I use pipe-ettes, eyedroppers, to dribble the adhesive on. it should have a mirky, milky white appearance when you are done. The dish soap is the key(as is the thorough soaking) to getting everything to behave like good little ballast should

I sure help this dribble helps Ken, I know the frustration. Good luck !!

Don't need to Dremel as you'll be able to pick it off with a dental pick. Why I should know these things? Let's just say I've been down that RR.

The trick to ensure your ballast doesn't float is the spray on the wetting agent as it will soak through and not be enough to float the ballast, which is, by the way crushed walnut shells. As I said before I go with half cup of water, a good swig of rubbing alcohol and a couple of drops of dish soap or laundry soap, the soap being the key. And I also add a few drops of water based burnt sienna and india ink to make it look grimy. Steamers weren't the cleanest machines around.

Ken, I would think that soaking the area with water would loosen everything up to where it could be lifted? Done it with normal white glue a few times, I'm assuming Elmers would do the same?
I did the same thing on one section of track on my old layout, my solution? Dump more ballast on top to represent track waiting for a tamper, as on the real thing! On the Central Manitoba we had the boss dump a whole car through a switch, now that was fun!

Thanx everybody for 'listening' to my rant ...

Eric, I remember that excellent thread of yours from several months back, and as a matter of fact I did use a leftover Elmers jar to apply the gluey mix - that part worked very well.

My real problem was that, other than the turnouts (which are OK I did do those slowly and carefully, thank God!) - I dumped ballast indiscriminately over the track and simply 'flattened' it to tie-top level, A$$uming that the stuff would simply stay-put when I soaked it. I overlooked one important fact: WS ballast is not stone, but crushed walnut shells - IOW, lighter than water!

Johnny - not to worry, in a moment of clarity I remembered how my Dremel sprays dust everywhere [in addition to the bad side-effects you listed], so I did the jewelers-screwdriver-between-the-ties thing even before I read your reply. The stuff is loosened, now I just need to vacuum the debris off the layout - I'll try to reuse it if my Dustbuster is strong enough to suck it up - but no way, if I'm forced to use my Shop-vac.

The main lesson I've learned from all this is: Put the ballast in between the ties sparingly, the same way as I do on turnouts. Takes alot longer, but at least it will be 'right' the first time..!
Last edited by a moderator: Apr 14, 2006

Ahh, Fergie and Rico, I see you guys just now joined the discussion! As my post above indicates, I think I know how to avoid this trouble in the future. But thanx for your input!

Since some of you have been asking for them, here are some pix - unfortunately NOT the greatest quality because I had to use a flash; I was in a hurry and didn't have time to setup the tripod. Also, since this is only a 'demo' stretch (never intended to be photographed), the rails were not painted - painting should always be done before applying the ballast.

Image #1: I put the various fluids in different-sized Elmers containers so I'll know which one to grab at the right time. [I learned about the trick of using leftover Elmers Glue jars from an eralier ballasting thread posted by our own GrandeMan!] At the bottom is the 1-inch diameter paint brush I used. 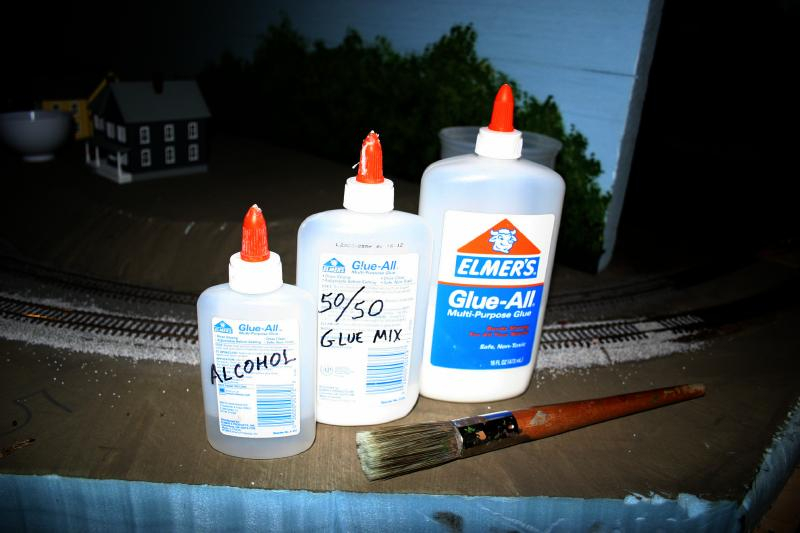 Image #2: Finger-pinched piles of ballast carefully dropped between the rails and beside them. [The track in the background is an industrial siding, I couldn't keep it from showing in the pictures] 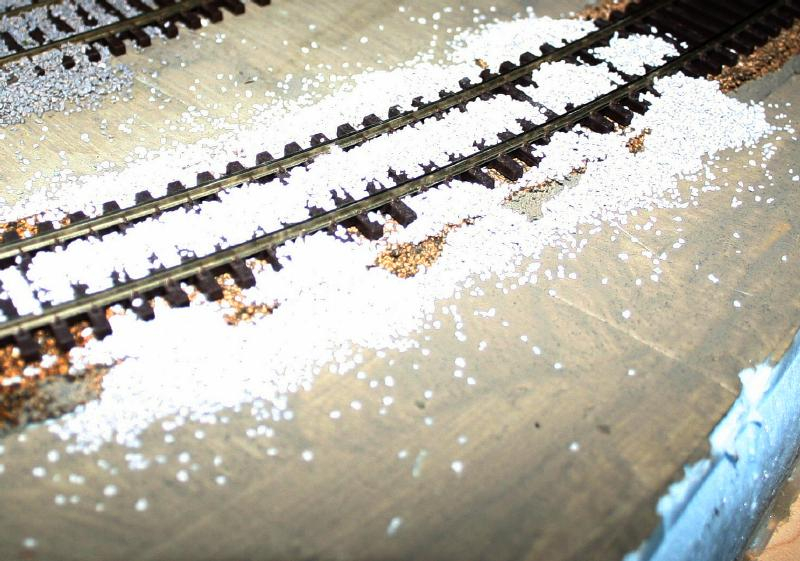 Image #3: Gently sweeping the mixture in the direction of the un-ballasted area, trying to keep the tie-tops clear. 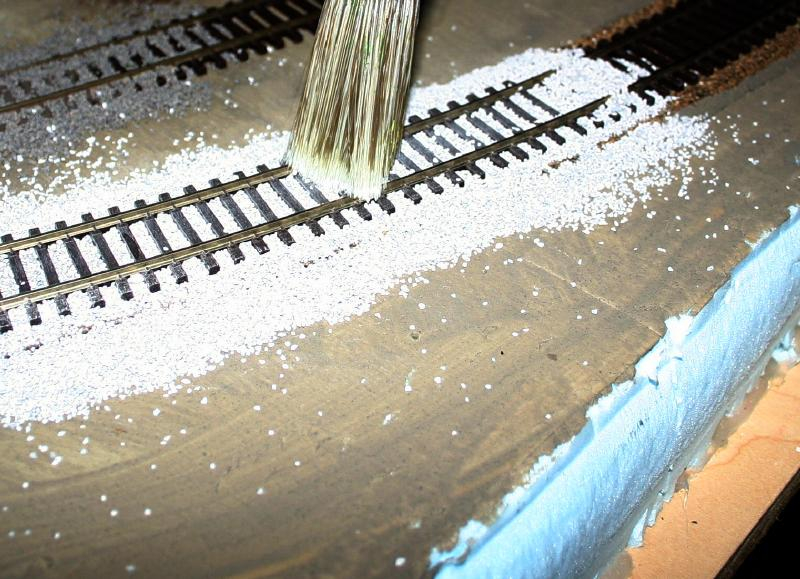 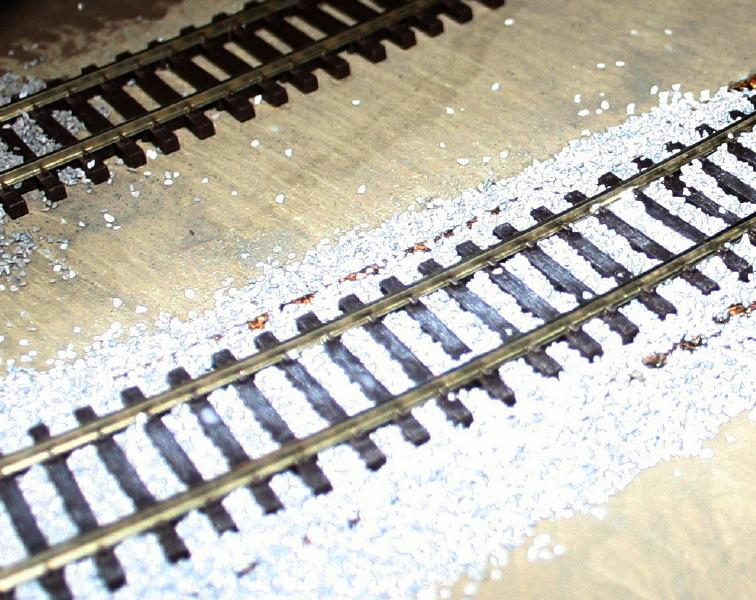 Image #5: Here is a section of track I did on Saturday which has already dried. I still need to cover some bare spots beside the track. [The bright flash made the ties look much lighter than they actually are.] 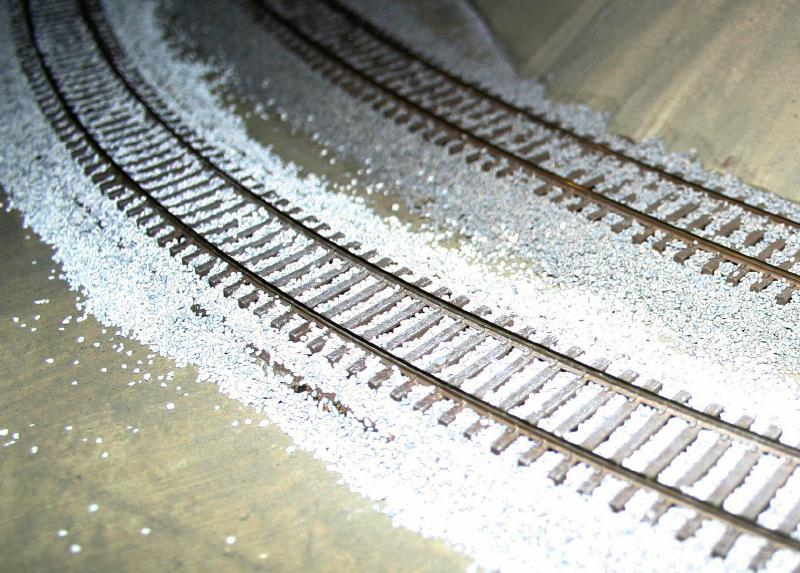 ...and that's how I did my ballasting. Probably not everyone's idea of 'the best way', but it works OK for me, for now...
O

Ballest?Don't need no stinken ballest!!!!!!!!!LOL I hate ballest,for over 40 years I've tryed it off and on,It's an shame we cant get track allready done?Alas!! like every one says , it takes time , wet water , and good old elmers white glue!!
JIM