Burlington Bob- Since you asked, and I finally got the better camera out... 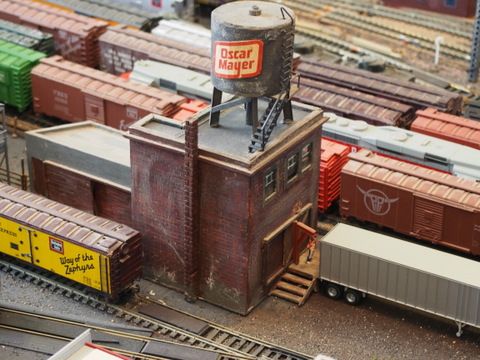 Oscar Mayer meat packing plant I scratch-built from an article in MR about 62 years ago. Building is all balsawood, with the bricks inscribed with a pencil. It has resided on every layout since.
Below. E-5A/E-7B tow the Denver Zephyr up the 2.5% grade out of Galesburg on the Grashhook, Galesburg & Western Division of the C.B&Q. 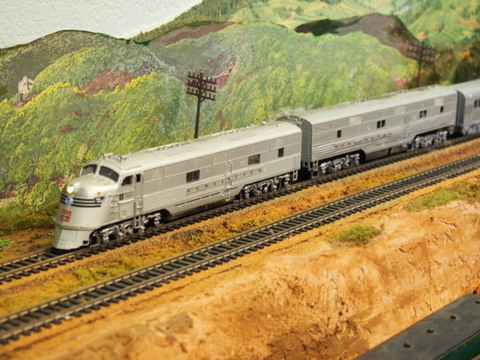 Burlington M-4A prepares to leave the Galesburg engine yard to hook up with a heavy coal train. Engine was kitbashed from two Mantua Mikados, remotoreed with a Canon coreless motor and equipped with Soundtraxx Tsunami decoder. Central drivers are blind, and locomotive will handle 18"R curves with ease! 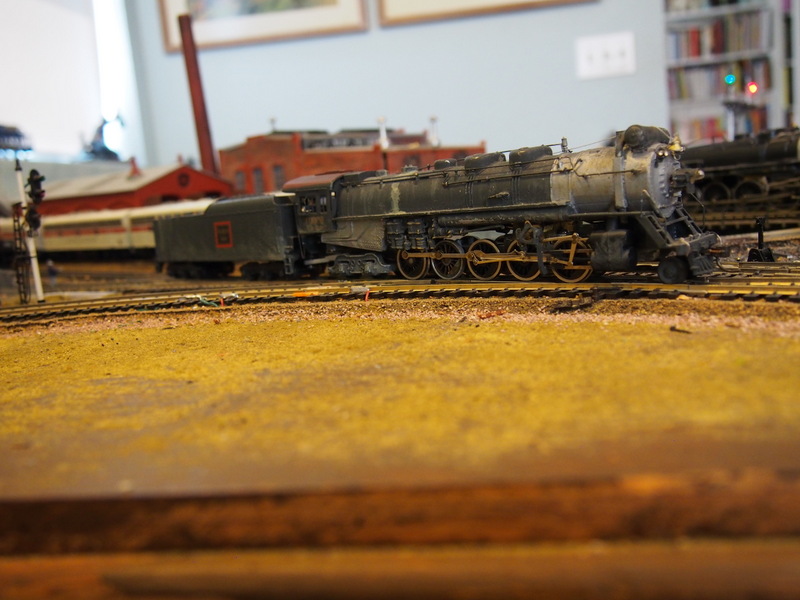 Thanks! I have more, but will hold off so as not to overburden the forum for a while!

Those are great, Trailrider! Don't hold off too long!! Thanks for posting them!

Post away! I love to see pics of other people's layouts.
T

A Burlington M4a climbs the grade with a string of hoppers bound for the Midwest Electric Plant on the Grashhook, Galesburg & Western Division of the C.B.&Q. 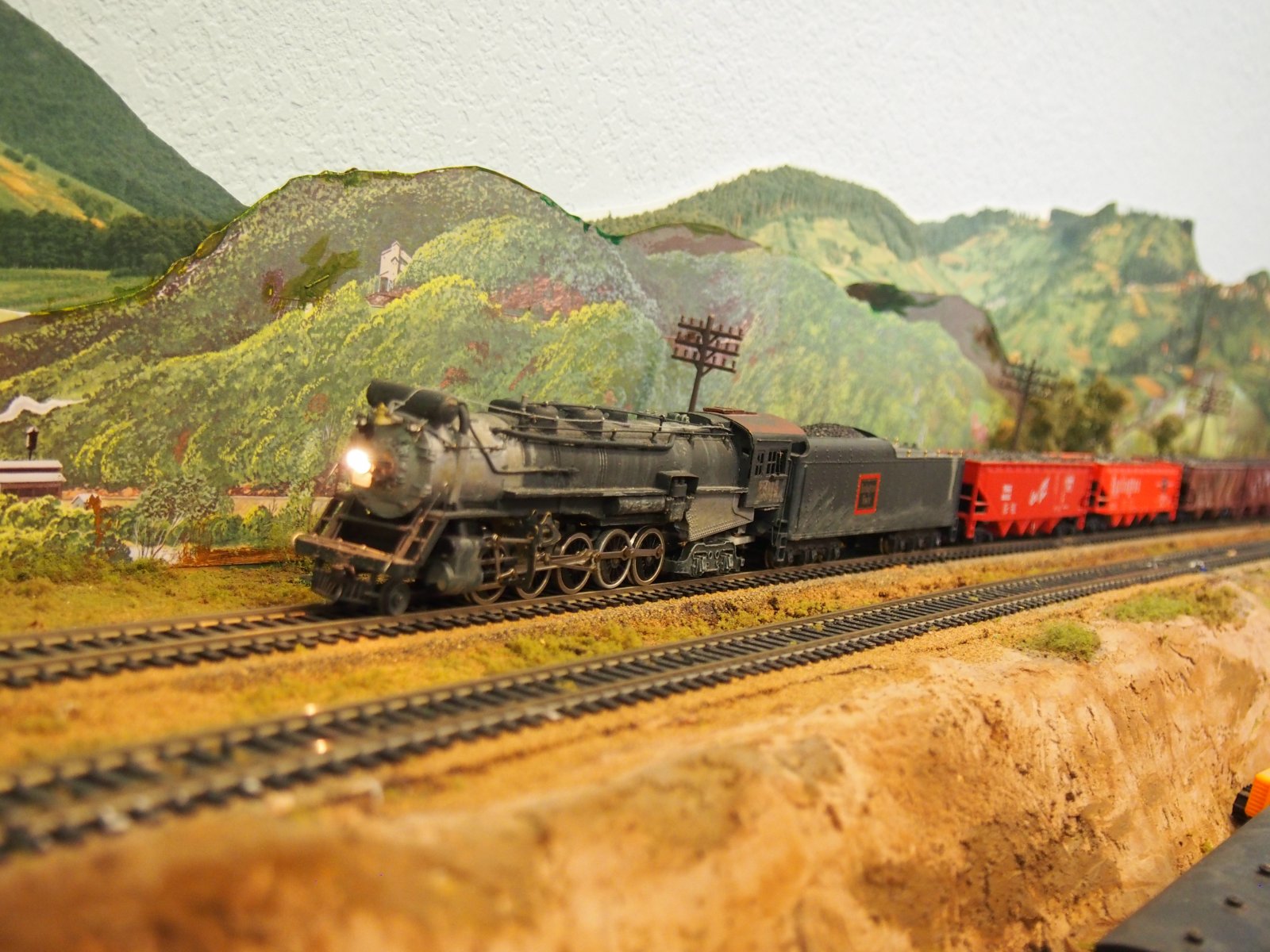 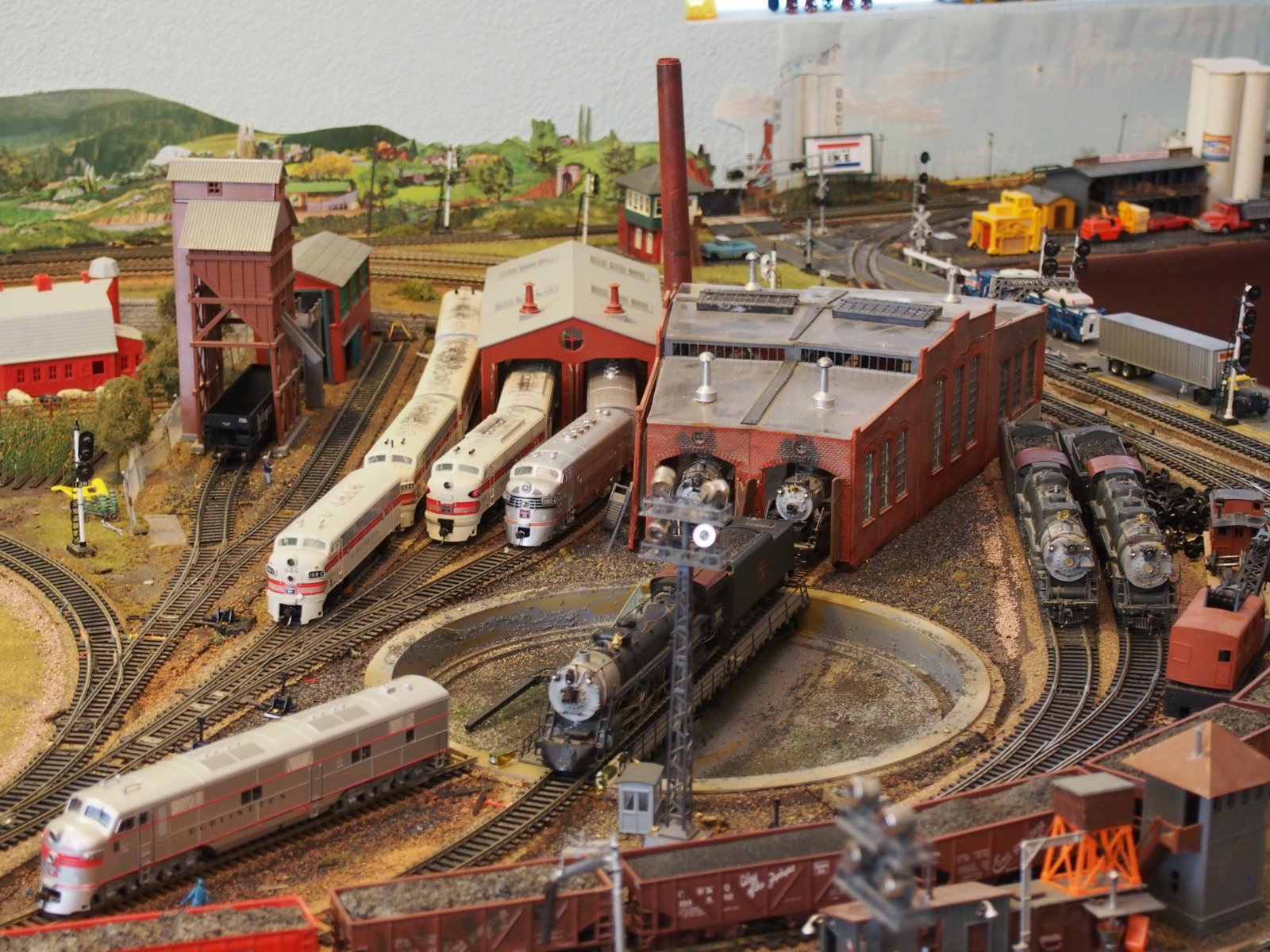 Galesburg yard. The 90 ft. turntable was too small for some of the bigger steamers, so a turnout was installed leading to the two stalls in the engine house. The locomotive on the bridge is a Burlington 0-5a. The two locos on the right, near the big hook are a "Q" M-2a and a Colorado & Southern E-5-A, basically an M-2a leased from its parent railroad. To the left of the engine house are a bunch of F3 and F7 "graybacks" in freight livery, except for the A-B-A F3 in passenger paint for the California Zephyr. Left foreground, is an E7A. In the foreground the string of hoppers shown in the photo of the M4, await the highball to start for Midwest Electric. In the steam engine "roundhouse" a 4-6-4 #3000, Aeolus rests sans streamlined shroud. To its left, blocked by the light tower is a 2-8-2 O-1.

Most excellent! Thank you, I really appreciate your time and effort to post these pictures. Hopefully, sometime later this year, I will be able to post some pictures of my fledgling layout. Thanks again for the inspiration.
T

Bob, you are certainly welcome. I appreciate your comments. I use a photo-editing program called Picasa. For some reason, it can sometimes give me fits in transferring photos to this forum. Eventually, though, I get it done. Stay well!
T 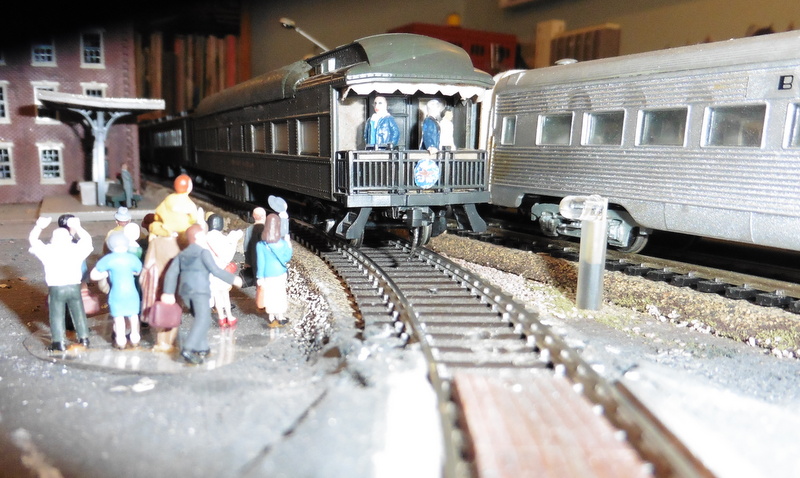 It's election year, 1948! Mom and Dad and I are on our way to see Mom's parents in Quincy, Illinois, riding on the Burlington Zephyr. But when we got to Galesburg, our train was stopped because President Truman's "Whistlestop Special" was coming through. Although Dad didn't plan to vote for him, he thought his six-year-old son (me) should see The President. So we got off our train and he put me up on his shoulders so I could see the president. In reality, the crowd was much larger, but I just don't have the room. Not sure how close we actually got, but I did get to see President Truman. I need to find some loud speakers to mount on the roof of the "Ferdnand Magellan" over the observation platform. That's President Truman with his hand on the rail, and Bess to his left, with an aide watching the crowd. (I usually have the crowd on the other side, as I remember that's how it was, but to get this shot near the station, I had to put the "crowd" on the other side of the tracks.) I had to remove the words, "United States of America" from the sides of the car because the prototype had the lettering removed for security purposes. A number of years ago, I was able to go through the car at a railroad museum in Florida. Talk about a real heavyweight. I think they had about 200,000 lbs of reinforced concrete in the floor of the car! FDR also used it when he toured the country. I seem to recall that things seemed so much simpler then.
Stay well!

Really nice recreation of a historical event and even cooler to have been a part of it!
T

Burlington Bob said:
Really nice recreation of a historical event and even cooler to have been a part of it!
Click to expand...

Thanks, Bob. I can still see the actual scene in my mind's eye. The president's train was actually on a track that was about 45 degrees from the one our Zephyr was parked on. Funny how a little kid can remember stuff. I was only three when my Dad came back from overseas when the war in Europe was over. I can still see him coming from the DC-3 to the gate in the chainlink fence at Midway airport in Chicago! Later, when he went to get formally released from active duty, my Mom and I had also gone to see her folks, and we came back on another "Q" train, with heavyweight sleeper. I saw this man coming toward us and got scared and started to cry because my Dad was dressed in civvies and I had only seen him in uniform! Long time ago...maybe in a galaxy far, far away!
Stay well!

Some more G.G.&W. Division scenes. Sugar beets being unloaded at the Great Western processing plant. Below that, looking southwest at Denver. Below that, looking northwest toward the sugar processing plant. President Truman's "Whistlestop Special has pulled in behind the suburban Aurora commuter station. Rear two cars have been uncoupled so as not to completely block the grade crossing. Lots of junk laying around. 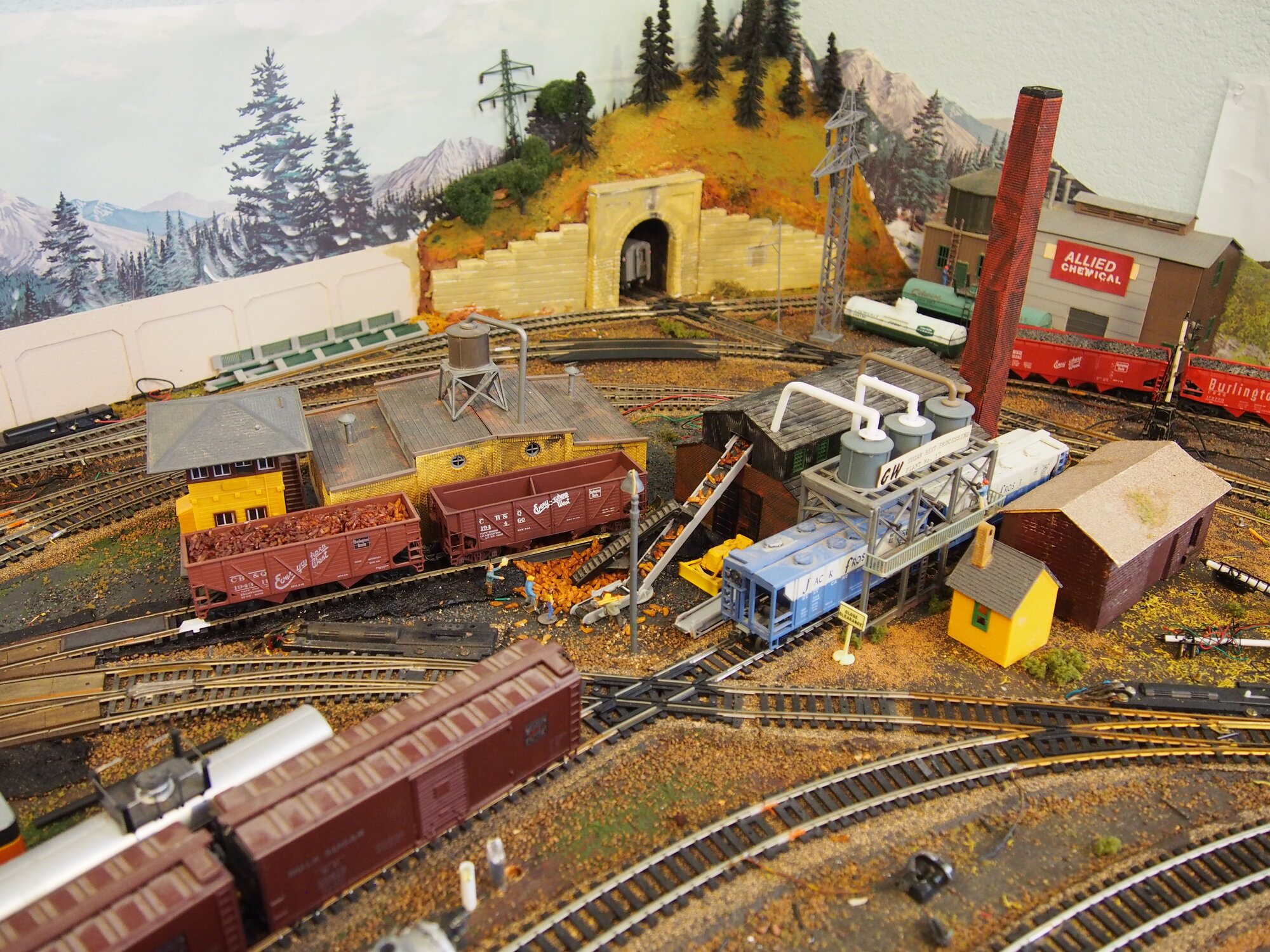 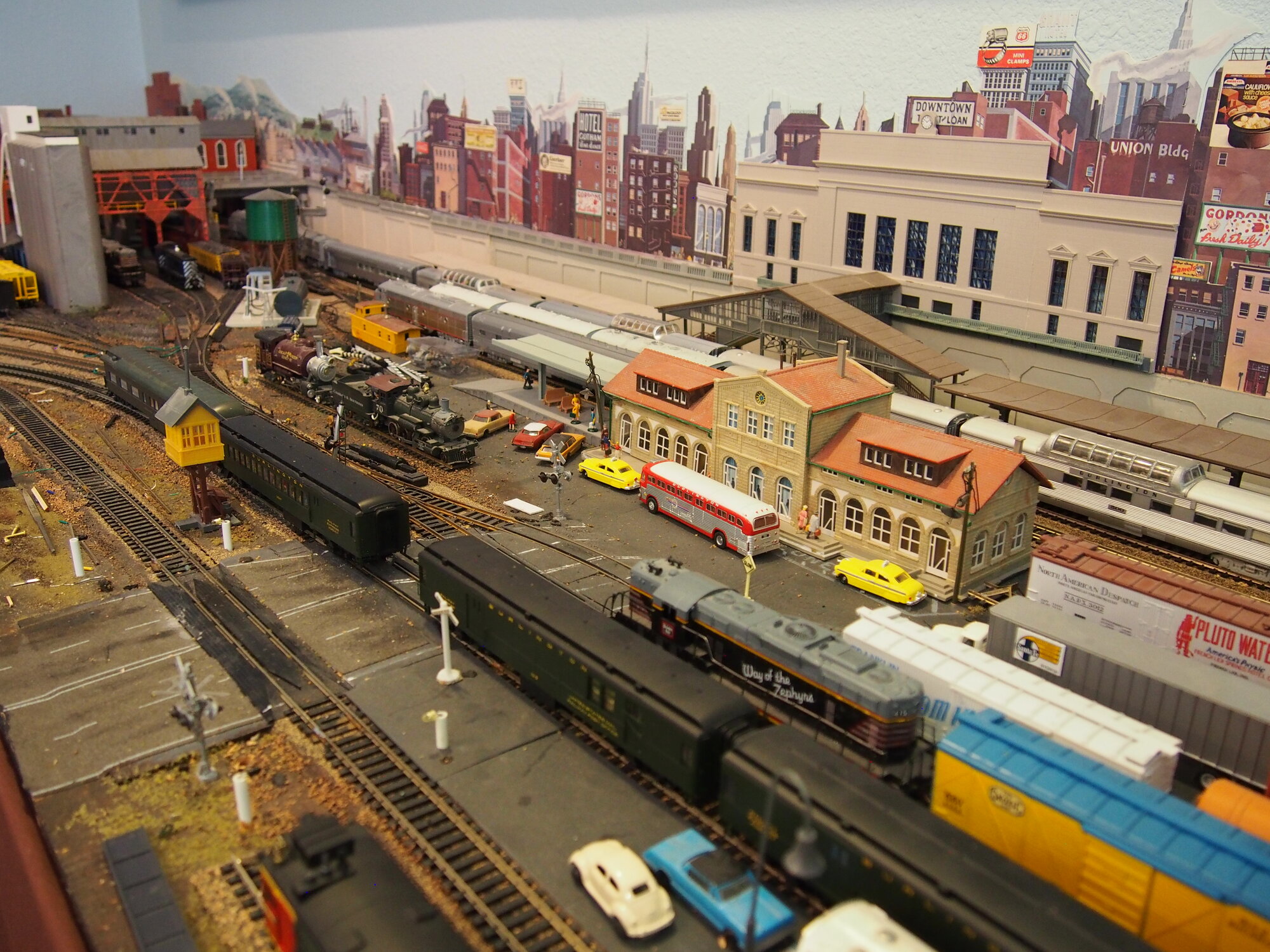 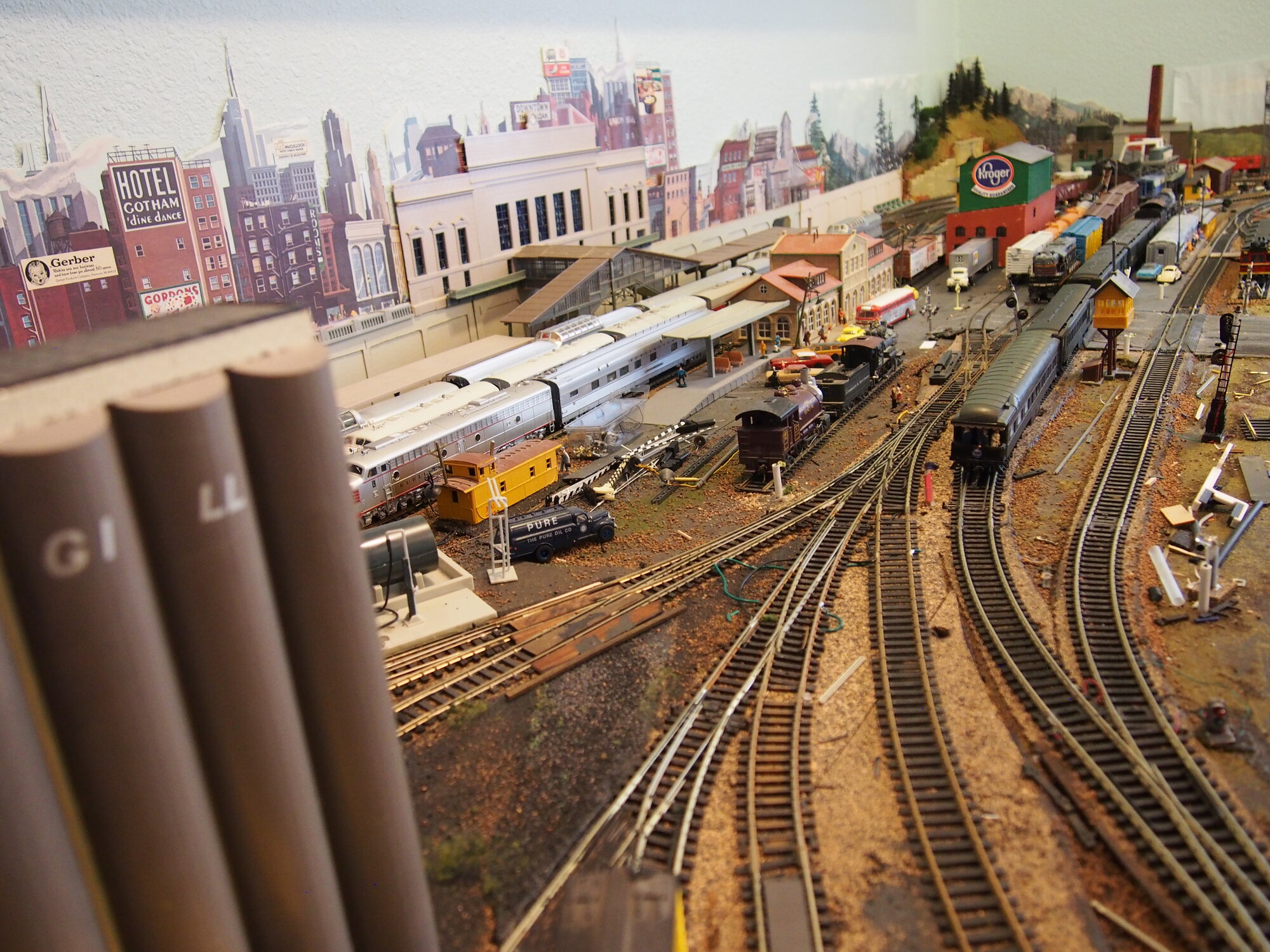 Trailrider, I know exactly what you mean about remembering something from your childhood when really young. I have several memories from when I was very young and they are just as vivid as if they happened yesterday! They are very special and I hope they never fade!
T

Burlington Bob said:
Trailrider, I know exactly what you mean about remembering something from your childhood when really young. I have several memories from when I was very young and they are just as vivid as if they happened yesterday! They are very special and I hope they never fade!
Click to expand...

Hey trailrider,
Reviewing your posts again this morning, is there a track plan/ layout dimensions of your layout by chance ?
T

You know, I never drew up a track plan. I wanted a continuous loop main line, in the form of a folded dogbone around the inside of a purpose-built 13'-7" (14' x 14' less the thickness of the walls), with a doorway entrance in the middle of the fourth wall, prohibiting just running around the perimeter. Needing access to a window to the right as you enter the room, and wanting a big yard in the space in the middle of the room, the result was something like the letter G, but flopped upside down and left to right. If you look at the photo of the Galesburg yard, in the upper righthand corner is an 18-wheeler on the road that is along the edge of the table. Note a curve forming part of a wye (the left leg of the wye is the northbound part of the main partially hidden by the engine house). The righthand curve of the wye runs behind the lumber yard and curve around to run along the "south" wall, leaving a 30" aisle, with a two-track terminal spur in front of the Grashhook station (not visible in the photo).

The photo of the M-4a shows the "black diamond" train climbing the 2.5% grade along the "east" wall. The track closest to the view is the return of the dogbone. Both tracks will curve to the left in a sweeping curve of a radius I haven't calculated, and the tracks run on a 13" wide bluff that overlooks the rest of the 2 ft. wide table. The doubled main crosses a "river" that is only the "length" of the width of the bluff as it runs at right angles to the track. There is a passing siding on the outside of the westbound main curve that has a small ski resort in the corner of the room. A tourist train, pulled now by a Heisler can haul people up from Grashhook station, and the west end of the siding is a parking place for a work train.

The "double main" tracks diverge after crossing the "river", curving around to the portion of the layout along the "west" wall of the room, becoming the Denver/Aurora (or St. Paul, MN...I've never decided which it is), which is shown in two of the photos. The main becomes a three-track station which then loops around to go back eastbound. A 13-inch aisle space is between the end of the main layout, with a stub spur on the south wall, that ends at a bookcase. This aisle allows easier access to display racks on the west wall of the room, and there is an oil depot in that corner of the room. The pike "jess' grew", with about as much "spagetti" as my pitchfork could handle!

Time permitting, I'll try to take some more photos and maybe try to draw up a diagram of the layout. I appreciate your interest.