Every once in a while, I'll be looking through folders and come across older(early pics) of my models and modeling. You know, the good, the bad and the downright UGLY. Feel free to show your stuff as well. I think this could be kind of fun. When I first started building modules, they were in dire need of improvement. I even tried adding photoshoped skies and the likes to them just to dress them up. For me it is a learning process. Some thing I continue to use and others have fallen by the way side.

The first engines I ever painted after getting my airbrush, were 3 geeps that I got from a guy here in town. He is a big BN nut. I got all three for a song and figured it wouldn't be a big loss if I screwed them up. And now they are about tp be re-painted into the MadCoW scheme.

Here they are after finding out that I was looking for them. Dumb place to hide :

And after stripping them down to bare plastic and painting and details they looked like this:

Talk about being in the right place at the right time........I was GIVEN these two athearn engines from the same guy I bought the BN engines from. I was down at Grand Crossing and he showed up with them and asked if I had a use for them. ARE YOU NUTS? I am the KING of recycling. I saw in these units the engines I had seen on weekends in Madison when I was a boy. (BTW I was also GIVEN 2 Proto-2000 E-8's from a guy who's brother had died and wanted me to paint them and give them a good home) any way, here are the Athearn F's as I recieved them:

And after they became commuter service F's on the MadCoW:

Here is a photo of a scratchbuilt sanding tower. This has since had more work done to it and will be at the new engine facility:

Well that's all for now, I've got some other stuff I need to resize before I post it. As i said, this is an open thread to just share our 'naked ' works. Have fun and happy modeling!!

I think those geeps would have gotten away with it if they had just shut the doors. You know what they say, geeps are useful, but they're not the brightest bulbs on the pavement.

Im likin that sanding tower. great idea! thanks for sharing!

http://members.trainorders.com/pmack/gp39e/bn_gp39e.htm is the story about what happened to my model of the BN 2223.

Paul Mack
the man at Mahan

Johnny,
I love the photos. The last one of the sanding tower makes me feel like I am standing trackside.

Paul,
Mighty fine job with the Geep... that's some skills you have there!

Here's one from my "Old Files". It's another little scene I'd like to try and salvage for the new layout. That was my first attempt at carving foam. It ain't "Johnny caliber" but, it passes for erosion. Dave 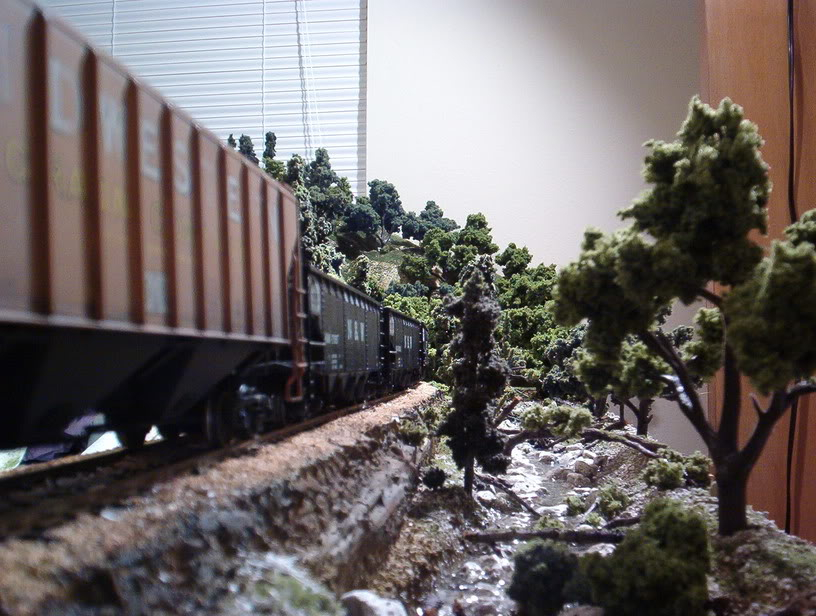 Here's one from my "Old Files". It's another little scene I'd like to try and salvage for the new layout. That was my first attempt at carving foam. It ain't "Johnny caliber" but, it passes for erosion. Dave
Click to expand...

Actually Dave, I find the scene quite believable. The Large rocks and the fallen trees are good examples of what you would see in that area. And from what I've seen of your new stuff, I'm inspired.