Hello everyone. Today we ran a first trial operation session using a simplified train schedule and the Digitrax fast clock. It was a fun (and educational) experience. We've run the RR many times since the staging was completed, but the schedule adds a whole new dimension! While the first drafts aren't fully developed, the schedule worked quite well. David provided some additional info we're looking into incorporating into the plan, so I know it'll become more refined as time goes by. We used some real Rio Grande 1960's Joint Line train numbers and made up the rest. Ten trains were packed into an 8 hour (4:1 clock) shift. That's some pretty serious traffic density, but we're in this to run some trains.

We also identified a few items that need to be addressed. We need 10-15 more coal hoppers, another loco set, and possibly a new crossover. The crossover would help prevent "log jams", but careful scheduling can do that as well.

During normal operations, the Sedalia local will dodge mainline trains while performing it's daily switching duties.

Here's a depiction of the loaded staging yards. We did something a little different on the set up today. Note that the train numbers were listed in addition to the loco number. That will help in the identification of trains when they're on the layout. Certain trains will be setting out/picking up cars, and need to be identified by train number. 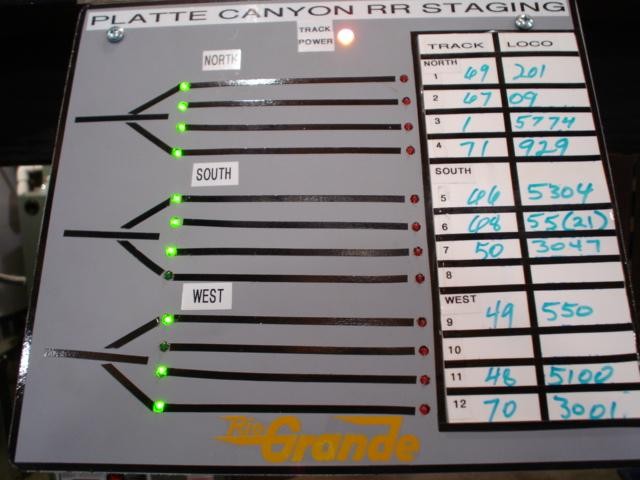 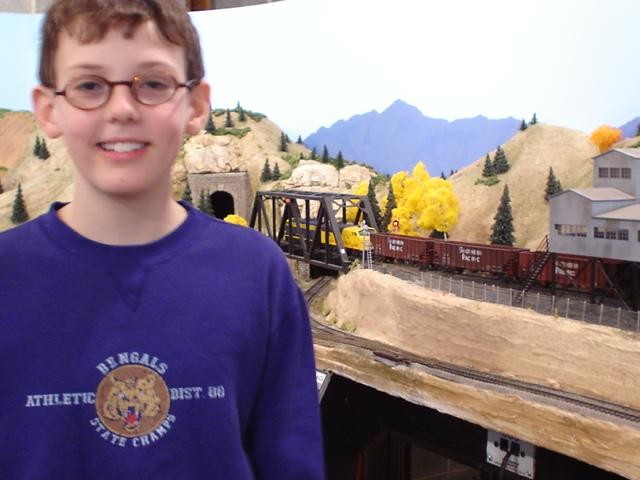 Northbound train 70 (Platte Canyon /Denver) waits on a siding south of town for a clear main. 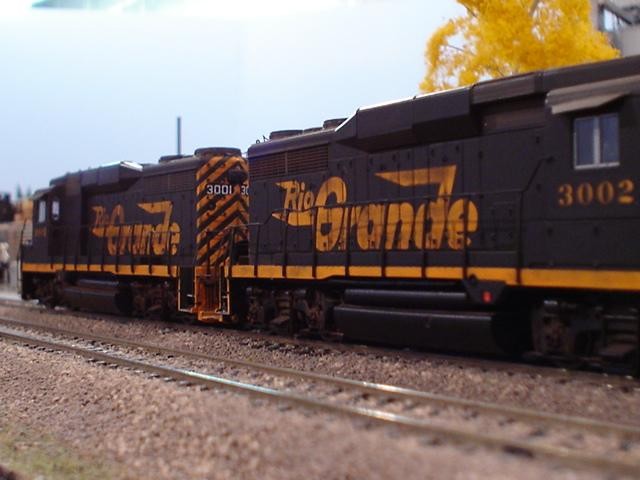 The wait's almost over. Southbound train 67 blurs by on it's trip to Pueblo, Colo. 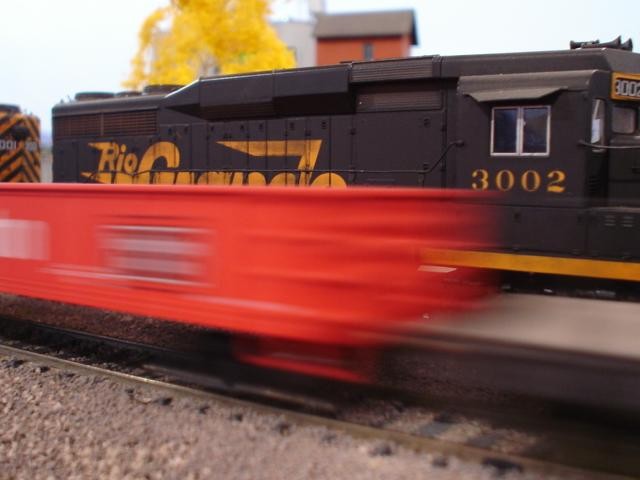 We're open to any and all comments as to how we can more realistically operate the RR. There has even been talk of setting up a dispatchers desk and having radio communication between him and the engineers. That would only work when we could get a third operator involved though. Thanks for reading and happy railroading!

Sounds pretty intense Grande man!!!
I've always wanted to use a fast clock and have an operating session, but that's light years away for me!!
Keep up the good work.
D

Yep, straight off the joint line. The trailing unit is UP. We've only got two ATSF units. One is the P1K F3, it's a great little loco. The other is a Walther's Trainline GP9. It's gone as soon as I can get a replacement! The other added color on our RR is CB&Q. We just ordered a new P2K GP30 to go ith our GP20. Other than that, it's all Grande.
D

You know you could get a couple SD24's to handle that coal train, they were pretty well in use for your era. They are mean looking units, but then again, you may not want six axle units tearing up that main

Something else you may want to look at is the sigOps site, they cover a lot of what you are doing.

Lots of stuff to make your head swim...

Cool, the sigops site is great! You've been a huge help here Dave. Thanks!

As for the SD's. That's a good idea. We've got some tight curves, but our SD7 runs fine on them. We're getting close to having everything together, we just need to buy a few more things...

Old 97 said:
I've always wanted to use a fast clock and have an operating session..
Click to expand...

I wonder if you could find a group to do that with while you work on your RR. That way, you could be practiced when the time comes to operate your own layout. Right now, we'd like a third operator so we could add the dispatching job. I bet there's someone else out there needing folks too.

grande man said:
I wonder if you could find a group to do that with while you work on your RR.
Click to expand...