I previously built the Tichy jib crane and installed it on my freight house dock. It turned out really nice. But I decided that the scrap metal dealer needed a crane too - they are such useful things.

I didn't want to just build another copy of the Tichy model so I looked around for a different jib crane. There are not very many out there. But Durango Press makes one that I thought would suit. The local hobby store was sold out of them, so I mail ordered one. It came today and I started building it.

The first thing that struck me was the fact that the box says "pre-cut strip lumber", but all the pieces they included were actually longer than the full-sized drawing indicated they should be. So I cut them all to length. At least there were enough pieces included - not like some kits I've built.

Then I stained all the lumber dark brown. I'll hit them with a grey wash next to make them look aged. 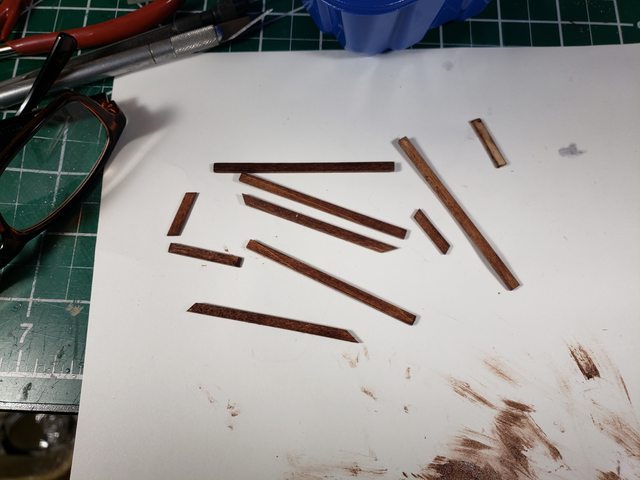 While that was drying I started cleaning up all the teeny-tiny metal castings. Holy cow they are small. I got the winch castings all cleaned and decided there was no way I was going to be able to paint them before assembly, so I put it together. 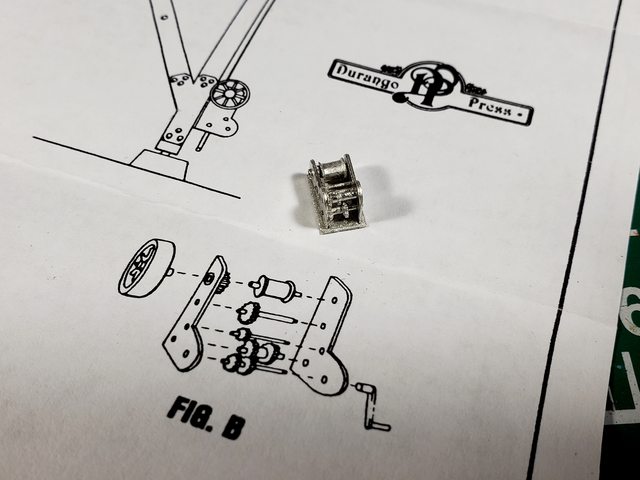 It does make a nice looking winch, and I only dropped one part on the floor - it took me five minutes to find it!

I'll finish cleaning up the rest of the metal parts and then paint them. It shouldn't take too long to build this model and I think it will look pretty good when it's done.

I'm interested in seeing this! I'll have a scrap yard on my layout, and this may be something I'll want to add. Thanks for sharing this!

I have this kit in my collection for future build... watching as well!

Today I painted all the little metal parts (well the first side for some of them anyway).

Then I cut the notches in the beams to lap them. That wasn't difficult, but I took my time to get it right. 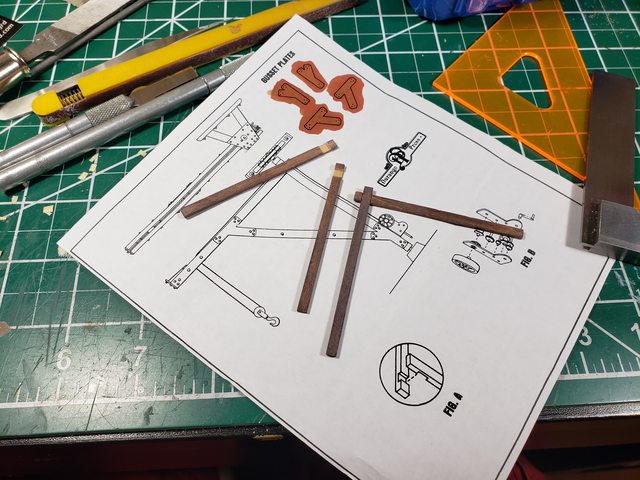 I glued them up using my magnet plate, but I could have just pinned them to the template I suppose. 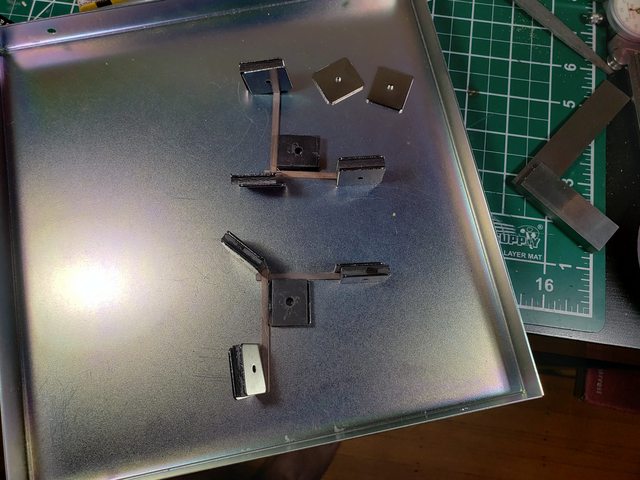 After that dried a bit I glued on the first brace. After I finish writing this up I'll find another piece of foam so I can glue and pin down the second brace. I also cut out the gusset plates. I like this idea of just using paper for gussets and since paper is .004" thick (or so) that's about a 3/8" thick iron plate, so it's about the right thickness. I gave the gusset plates a preliminary coloring with some markers, but I'll add more rust with paint after they are glued on. 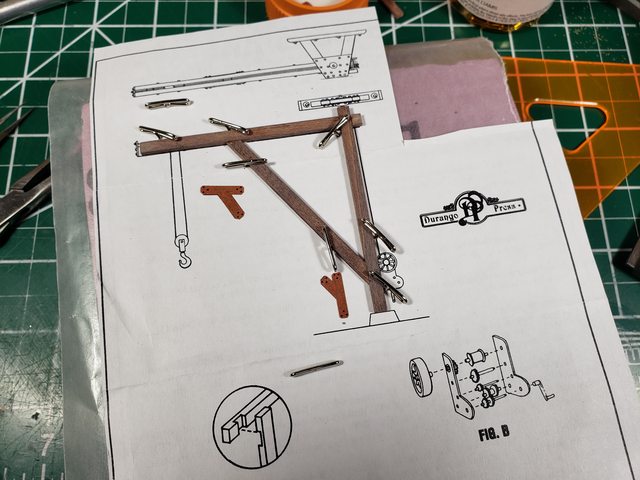 Re: "... I could have just pinned them to the template I suppose."

JazzDad said:
Re: "... I could have just pinned them to the template I suppose."

As anticipated, I hit the other side of the metal parts with some paint. Then I painted the concrete base with some concrete color, and then added rust streaks and black grease stains. I also hit the winch with some black to suggest that it might have been painted black originally and then some more rust. 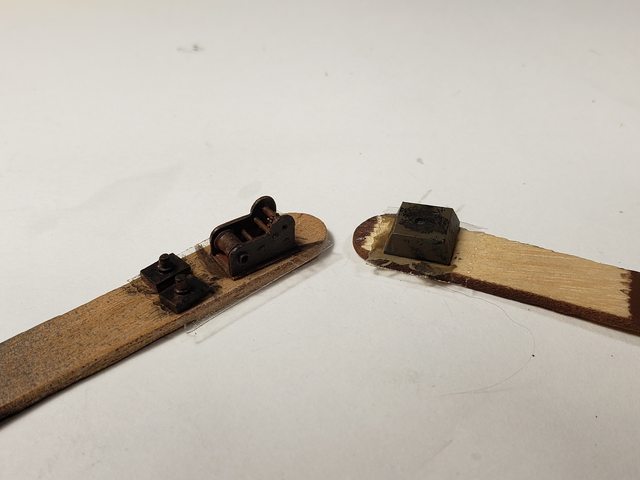 I also glued on the gusset plates. 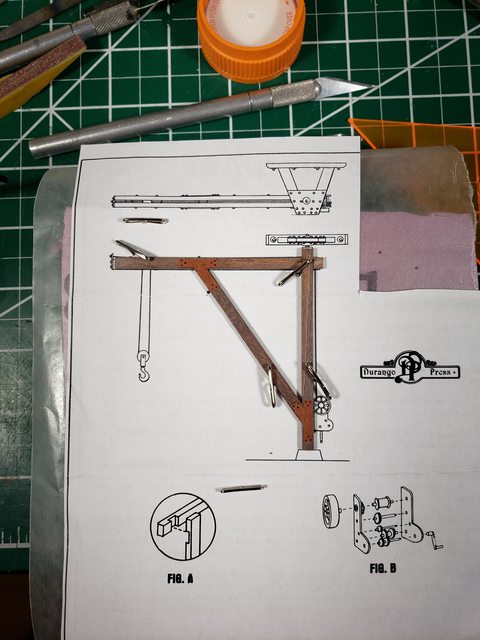 I let those dry while I prepared and ate dinner, then I drilled out all the holes for the NBW castings. There are a lot of them.

Installing the NBW castings is a pain in the butt. The small ones tend to shoot out of the tweezers and disappear. I probably lost at least 6 of them. Luckily they provided a lot of them in the kit. I managed to get all the NBW castings installed on one of the sides before I decided I'd better quit before I went crazy. 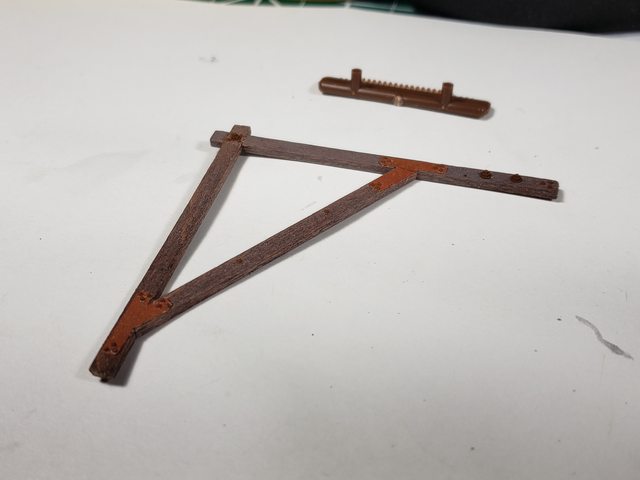 Go ahead, count them. 27 small ones and three larger ones. Per side. Oh, btw, there were no large ones in my kit. Luckily I bought a bunch of different sizes the other day, so I just grabbed some of the ones I had.

Almost finished up. I installed all the NBW castings (feels weird to call them "castings" when they are injection molded, but whatever) on the other beam assembly.

Then I started installing the "cable". They provided some black thread and I just used that.

I pulled a length though the winch and wound it onto the drum. This was also tedious, but I figured out that I could put small dots of canopy glue on the drum to stick down the thread. I should have pulled just a little more through to get a couple more turns on the drum, but it came out good enough. 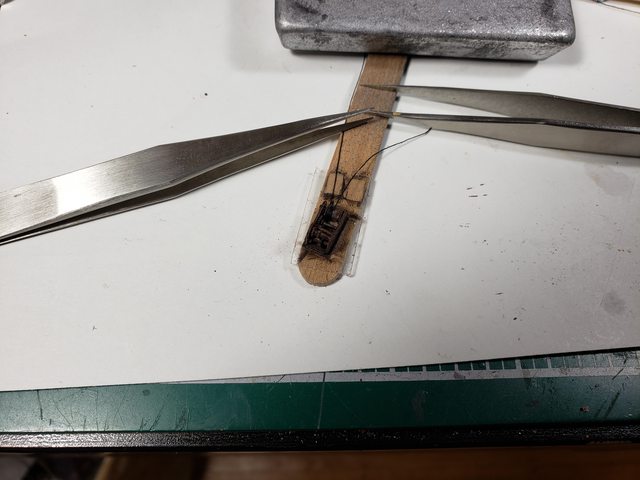 I glued on the end plate, the winch assembly and the two bearing blocks. I also glued up the upper support. 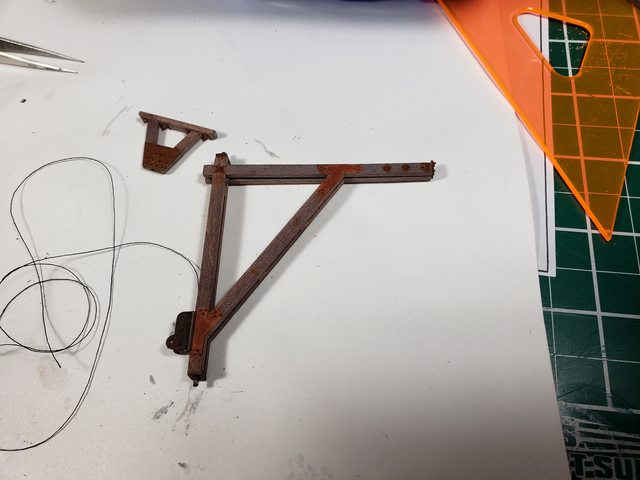 After that dried I noticed that the thread was twisting so I pulled it tight with some weight (a pair of tweezers) and applied some thin CA to the thread to stiffen it. 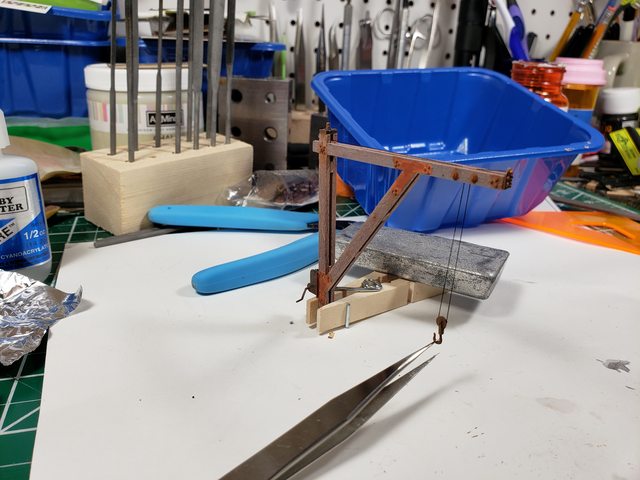 I had a little wiggle room, so I popped off the two bearing blocks, cut the vertical beams a little shorter, and glued them back on. Hopefully this will be enough to make it fit. If it's still too tall I'll probably make a bearing plate to replace the cement block at the bottom.

It's just barely short enough, but since it's my railroad I'm going to run with it. I installed it this evening, here are a couple of pics. 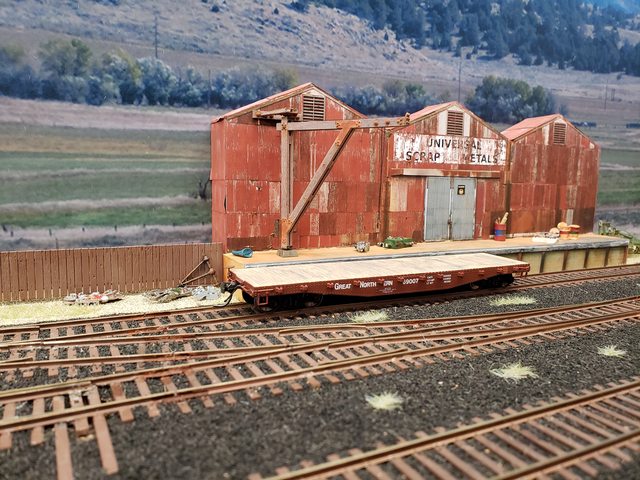 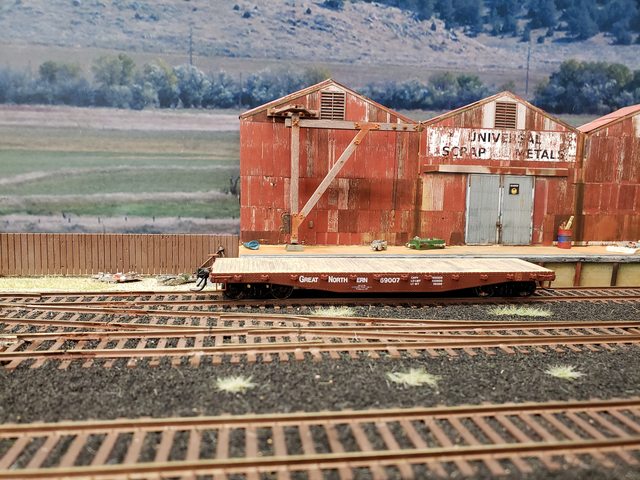 I left the pivots unglued so I can swing it out for photos. I could probably even suspend a load from it. I do see that I need to re-glue the winch crank handle.

Very nice!
Thanx for posting the build, so what’s next?

Rico said:
Very nice!
Thanx for posting the build, so what’s next?
Click to expand...

Thanks. Still need to finish up Tylick Tool. I have a box car and a caboose I need to complete.

I just ordered four more car kits, and I have a truck to assemble that will be my first resin kit.