Does anyone share my view of not needing scenery?

I am back after a twenty year absence, and I am just about finished with my fourth layout.

This time around, I have zero scenery. I built my layout on plywood (painted a light green with paint left over from painting the bedroom) with cork roadbed and Flextrackwith # 6 turnouts. I just like to see the engines and cars run. I like tinkering with the electrical components in the engines and keeping the rolling stock in good operating condition.

My previous layouts had scenery, and I spent too much time cleaning, dusting and repairing, not to mention the electrickery. Plus, when I looked at someone else’s in a magazine compared to mine, I would not be pleased with myself. In time, it just got old.

Now, I just play and enjoy it.

Your layout is whatever you want it to be. Do not let anyone tell you it is not good enough because you didn't do X or should have done Y. Having fun with it is what counts.

Not me. I became a scenery person at a mall show that I exhibited at. Me and a friend had a pink prairie foam top layout. His didn't even have roadbed. Track was glued straight onto the foam. Anyway for this particular show (2nd or 3rd) I had painted a portion of the pink with some mis-tint brown paint (see other thread) and sprinkled some green ground cover material on the wet paint. My wife had stuffed in a couple sprigs of some dried plant she had left over from some craft project to represent big weeds (small bushes actually). As I sat there and watched the train circulate (hour after hour like one does at a show) I noticed a huge difference in how the train looked going through the small section with dirt, grass, and weeds vs the rest of the pink loop. For the next show I painted the whole surface brown but still noticed a difference and an "increase in enjoyment" as the train went through the weed field. I even commented to my co-exhibitor about it and he said he had noticed the same thing. From that point forward I became a scenery person.

One can still see what is left of the "original" weed field near the top left. The brighter green around the corner and down toward the camera were added later. I believe these photos are about 2 shows after my story (the skirts were the new thing being installed when the photo was taken). 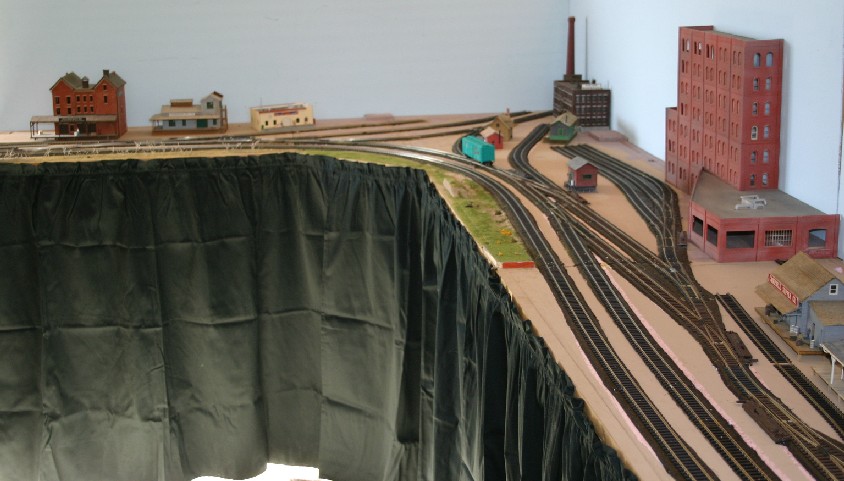 Staff member
I belong to two clubs, one with an older scenicked layout (being refurbished both track and scenery wise ) and the other that is in the throws of building a new 2 level one with broader curves than the other but in the plywood stage but with the lower level now working. I was running on the new one today and although it is a good design (but lacking much in the way of grades), it gave me the opportunity to think about the lack of scenery.

Cuttings, tunnels, towns, industries, countryside, trees and bushes etc along the track give meaning and purpose to a layout and a sense of watching my model train in as much as it can, would appear in the real world. One of my favourite spots on the older layout is where the track climbs a quite steep grade and passes through a deep cutting and then reduces grade, a great spot for videoing, especially with a sound loco on the point, labouring under the load (BLI AC6000's are good at that). While I enjoyed today's effort, scenery will for me, add immeasurably to that.

So, I'm definitely in the "No" camp, but as IH said, it's your layout to do whatever which way gives you enjoyment.

Staff member
What Nathan said - it's YOUR layout so you have it anyway you want it, with scenery, without scenery. Prototypical or completely fantasy, it doesn't matter so long as it is what gives you enjoyment.

Personally, where scenery/no scenery is concerned though, I have to join the No group with respect to your question.

To me, it is the scenery that makes the layout and gives it perspective and rationality. That, and the part of building a layout I enjoy the most is the scenery. My wife, on the other hand, would agree with you. She doesn't care about scenery, (or more the mess and time it takes) just watching the trains

Staff member
I tend toward minimal scenery on my layout. I have some areas with trees and grass, a few spots with ballast, and quite a few buildings, but I don't go all-out on scenery.
E

There are "minimalist" modelers who do nice bench work, flawless track work and no scenery, and concentrate on operations. Industries are represented by cards at the various locations. It's about what you like to do.

Add me to the "It's your railroad, do it your way, no one is ever wrong group". I'm scenery challenged. So, scenery goes beyond track, electronics and operation. On the other hand, scenery brings continuity to the layout. Why do those layouts "featured" in magazines look so good? It's because the scenery acts as a binder to bring it all together.

A coat of dirt brown or dirty green and a plain blue backdrop go a long way, but are not difficult. Add in some ground cover, some uneven terrain, a few buildings and trees, and it looks a whole lot better, without going crazy about it. Look at photos of an real life industrial area, what do you see? Elaborate rock cuts, or plain ordinary dirt, mud weeds and uncultivated trees, surrounding the siding and building. simple stuff.

I have seen some of the MR project layouts displayed at major train shows. These were designed to be portable. The scenery, in the photo layouts in the magazines looks a whole lot better than the scenery on the actual layout. But....it's the same scenery. 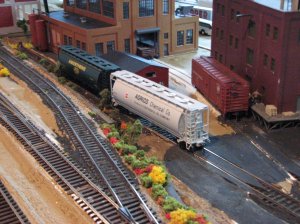 Stoker said:
Bill, you have my whole hearted approval to make and run your layout any way you want. Issues only arise in personal choices like this when those that choose one route to enjoy this hobby try to extoll that view upon everyone else.
Click to expand...

I will chime in and agree with what others have said. It is your layout and you can what ever you want with it.

I operated for quite a while without any scanery but as time passed, I started putting scenery in and, for me, I really enjoyed putting together buildings, scratch building and making a town with its industries look the best that I was able. As time passed, my skills improved and I was a lot less worried about doing scenery.

You layout is your workd and you can make it what you want.

My philosophy is to each their own. I personally like working on scenery but have a close friend that has a layout with absolutely no scenery. As far as I am concerned we are both model railroaders of the same skill level, we just like different aspects of it more. Have fun with your railroad the way you like it.

but when the model railroad scenery committee comes to your house to check the layout progress, what are ya going to tell them?

Thanks for coming but don't let the door hit you on the way out!

My philosophy is to each their own. And that applies to any hobby. I've seen car guys rip on each other for their choices but at the end of the day it's your car or layout or model plane collection etc. My scenery skills are not all that great but I can do simple stuff which is perfect for the locale that I model. So I'm not going to judge someone else's work or choices.
M

D&J RailRoad said:
but when the model railroad scenery committee comes to your house to check the layout progress, what are ya going to tell them?
Click to expand...

Offer em a beer and tell em it's a new estate waiting to be re vegetated! Then tell em not to let the door hit em on the way out and the beer was a fiver!

Espeefan said:
There are "minimalist" modelers who do nice bench work, flawless track work and no scenery, and concentrate on operations. Industries are represented by cards at the various locations. It's about what you like to do.
Click to expand...

There are people in all camps, I understood the question to be which are you? And personally I like to add, "Why?"

Staff member
I too try to add a "why" as there is nothing more aggravating than reading something that either agrees with, or refutes, whats being said but fails to say why. It is very easy to be critical of something, anyone can do that. It's a lot harder to justify the criticism with something substantive and supportive.

For what it is worth, I know one person who has a "massive" layout, well massive compared to mine, and he doesn't have a scrap of scenery on it, noting, nadda, nicks. I like scenery, to me it makes the layout but when I see this guys layout, it is so expansive and impressive that you almost don't even notice that there is no scenery. In fact, in this case, I think him adding any detailed scenery would detract from the impression of the layout.

I like the signature slogan used by "IRON ROOSTER" across the street: "If you're having fun, you're doing it the right way." Amen!

I completed my most recent layout infrastructure [benchwork+track+wiring] about 18 months ago and it's still mostly bare plywood [except for the steel mill which I was able to keep intact]. I decided I need some time to decompress and have a few op sessions to identify any weaknesses in the trackwork or the general design. But I want to eventually get scenery on it, that's just my preference. I doubt it will ever qualify for inclusion in Model Railroader, but that's ok. I'll just do one little section at a time until (1) the whole layout is finished, or (2) I am "finished" - whatever happens first!
Last edited by a moderator: Jul 26, 2014

Great thread, it is a good example of the great people that use this forum.

I originaly believed trains and tracks was all I wanted, it's still about all I have, not counting stuff in unopened boxes.

After seeing many examples of what can be done in other layouts I decided to add scenery to the to do list.