Just wondering how our members here like their models, focusing mostly on Locomotives here...

I voted Ready to run detailed but I'd also put super detailed. I like using manufacturers like PROTO as they have the usually standard details (Grab irons, handrails) pre installed. But I then go and change things around to fit my prototype. For instance, my newest project will be a GP-7 which requires me to install a new horn, rerail frogs, spark arrestor, and a gyralight.

Staff member
Well I voted "Scratch built, normal quality" but that is wrong. Should have been a choice for "KITBASH & Detailed" I guess that's where mine would fit in. I use enough details to make an acceptable likeness of the prototype but there's no way I'm going to try to replicate in miniature the real thing. I've been at this several years now and I want to run some trains shortly, but there's so much left to do before I can.
Cheers Willis

I'm pretty much with Willis on this one. I voted Super Detailed, but Kitbash and Detailed would best describe what I do.

I don't go all out on my models, but I probably put more into them (in terms of detail parts) than most. That's just one of the pitfalls of modeling Southern, N&W, and NS. Their locomotives were covered in external details like horns, bells, antennae, step lights, etc. Of course, the same is true of ATSF locomotives through the late 80s/early 90s and Southern Pacific locomotives from the 60s through the 80s. Fortunately, my ATSF collection is small in comparison to the NS stuff.

But anyway, I pretty much stop at the underframe. Once I acquire enough fine gauge wire to do sanding lines on my locomotives, I'll take it that far but I'm not interested in traction motor cables, full air lines, etc. Just the things that "stick out" to my eye, and that includes grabs, horns, bells, antennae, eyebolts, beacons, sunshades and the like.

Now, since my interest in locomotives leans so heavily toward NS and predecessors, kitbashing is a necessary evil. Not that I don't enjoy it. In fact, I probably have a great interest in these roads because of the need to kitbash models of their equipment. I'd say that of my 50 or so locomotives, less than half are box stock with details added. Most have seen paint scheme changes, either by stripping and repainting or by painting undecorated models. And there's a fair number of them that started out as RPP kits or were cobbled together from various components.

I must admit that I do have a few Atlas locomotives that really needed very little attention. Nice to be able to start with a model that's so close to being finished, but if I bought all my stuff RTR or just left it alone, I'm not sure I'd know what to do...

Without a doubt, Super Detailed!!!!

Nice to not feel alone with the detailing, I defalted my answer to Super Detailed, but I vary from kitbash, to scratch, to RTR with missing details added. I'm not the SUPER super detail man yet, as I've kinda avoided most of the underframe so far, but the pilot, and body, oh yeah... Building one from scratch/kitbashing provides its joy in that you "built it" but getting a RTR model that needs little work, ease's the operation.

Dang BNSF and their low headlights.

I'm beginning to get into the details on our locos. This is not so much that I enjoy it, but because it bugs me that some of them are so far removed from the prototype! The P2K versions are pretty good out of the box but others aren't. 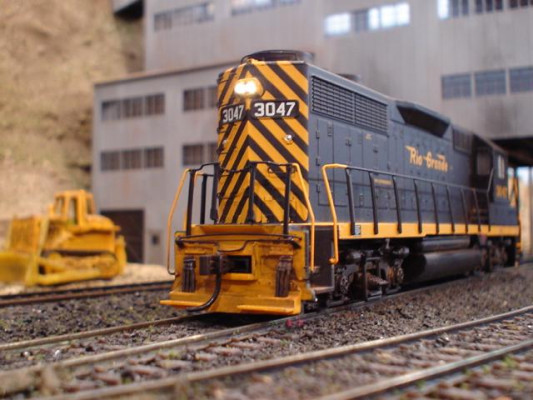