Ok guys so I bought a group of csx engines from a member here on the forum and one day it end up in my two year olds hands so I went ahead and turned it in to this so tell me what you think dislike’s or share your own wreaked engine’s.some I added smoke some have none tell me what looks better.. Thanks for looking (photo heavy)….. 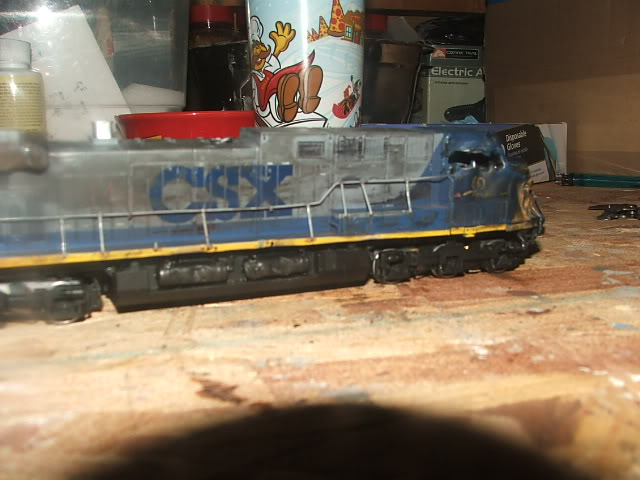 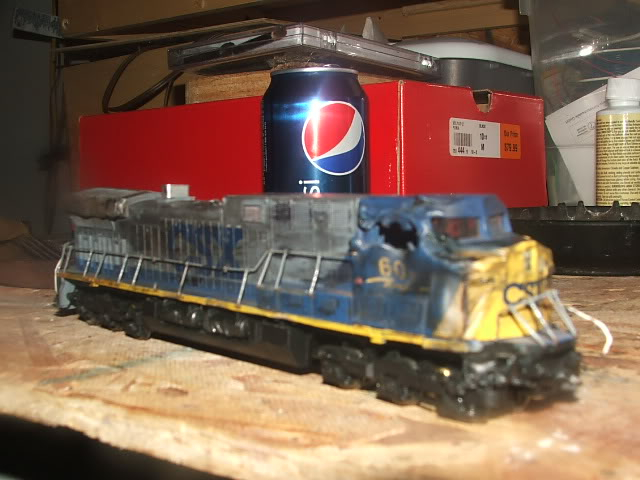 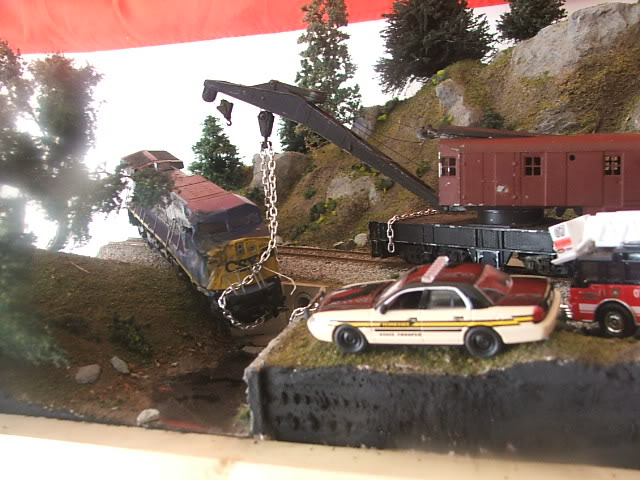 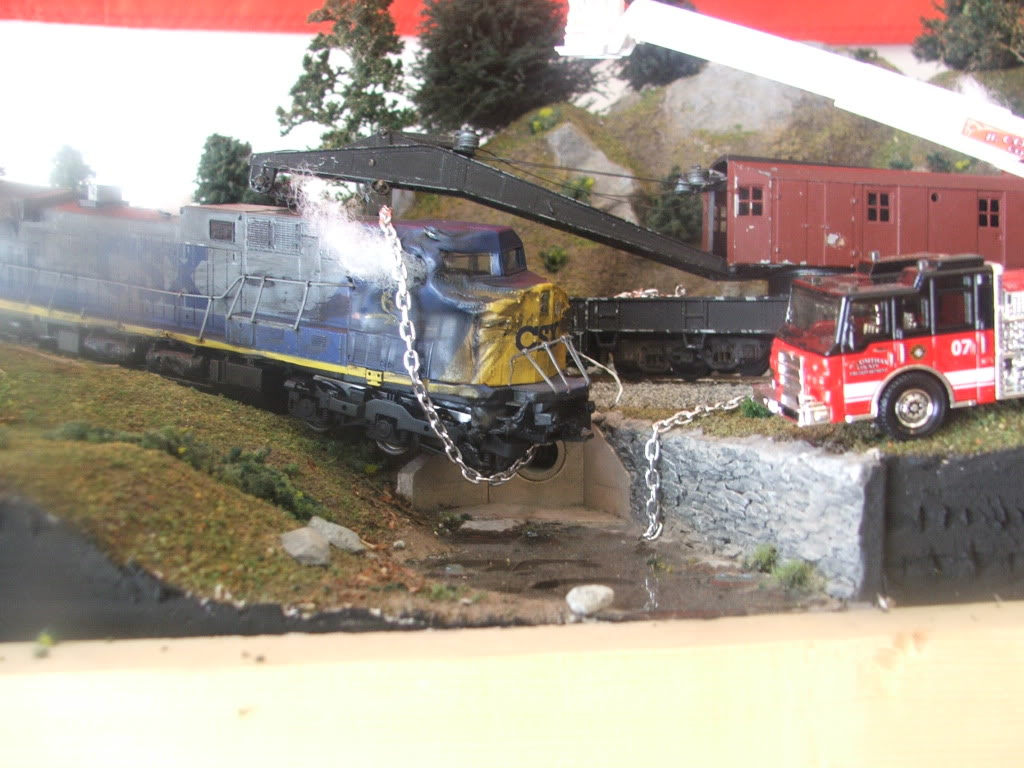 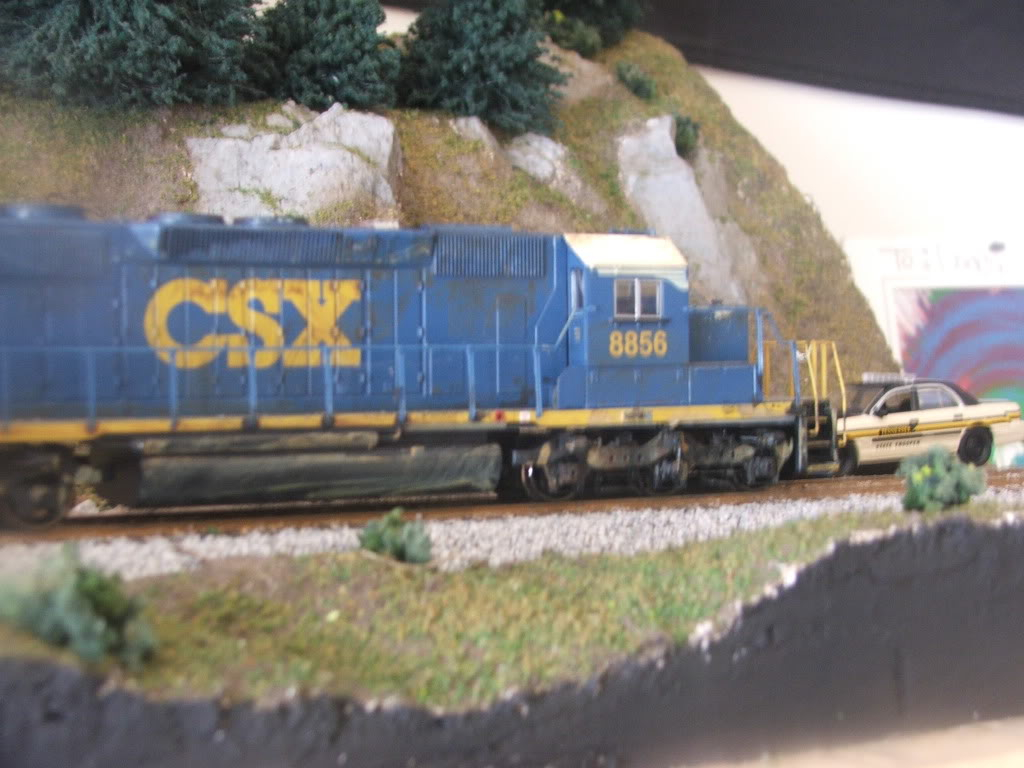 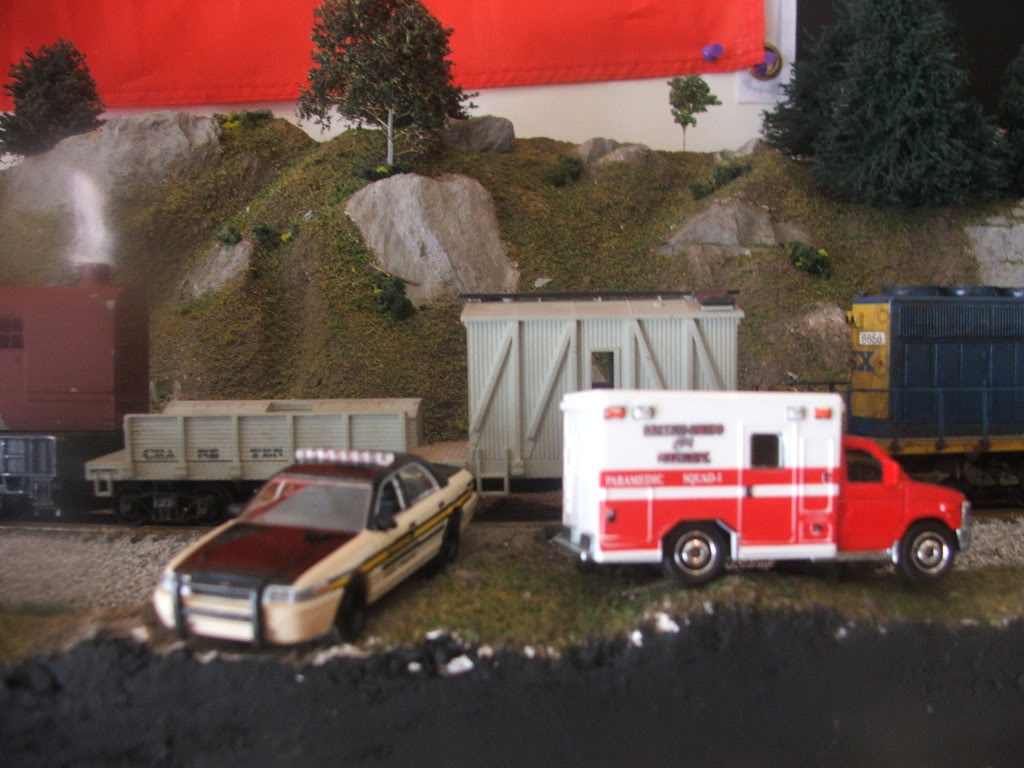 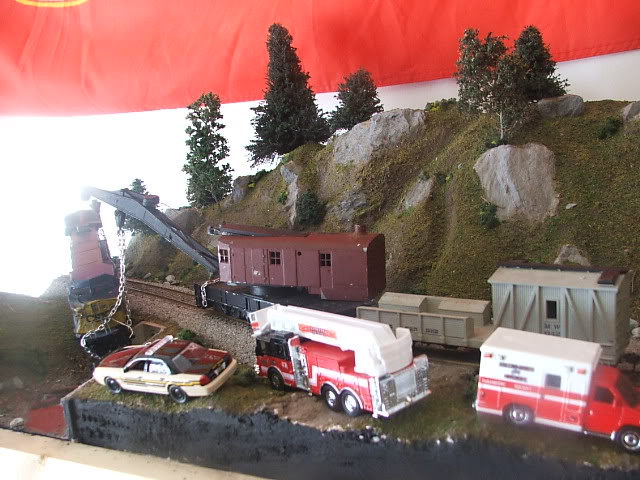 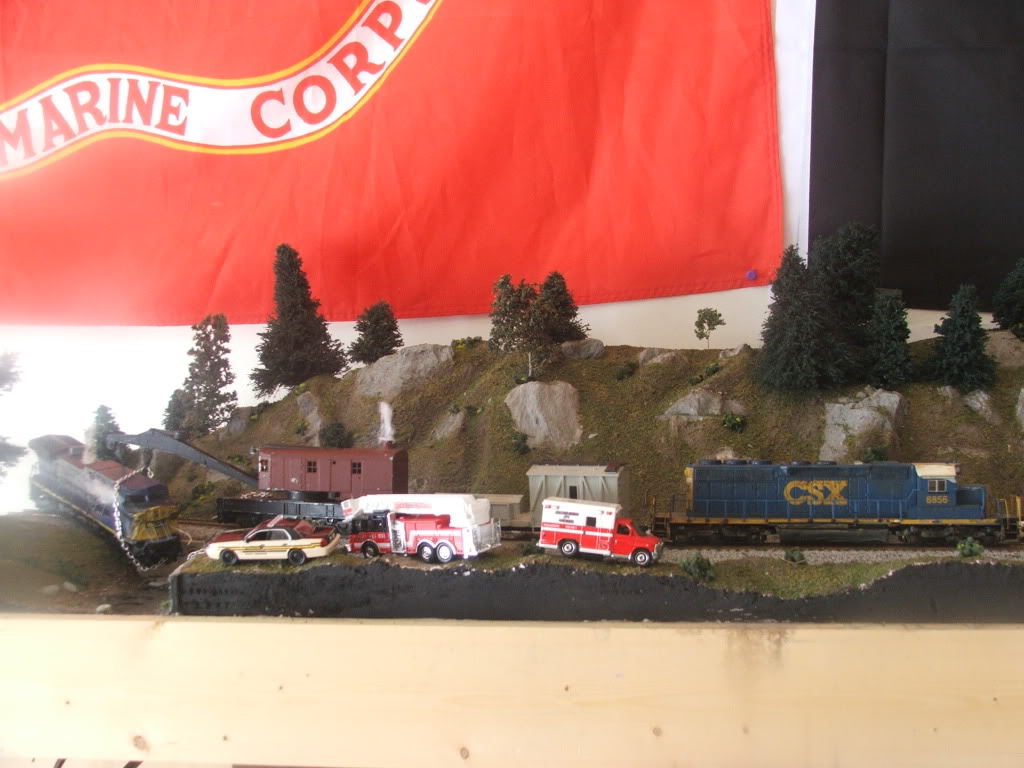 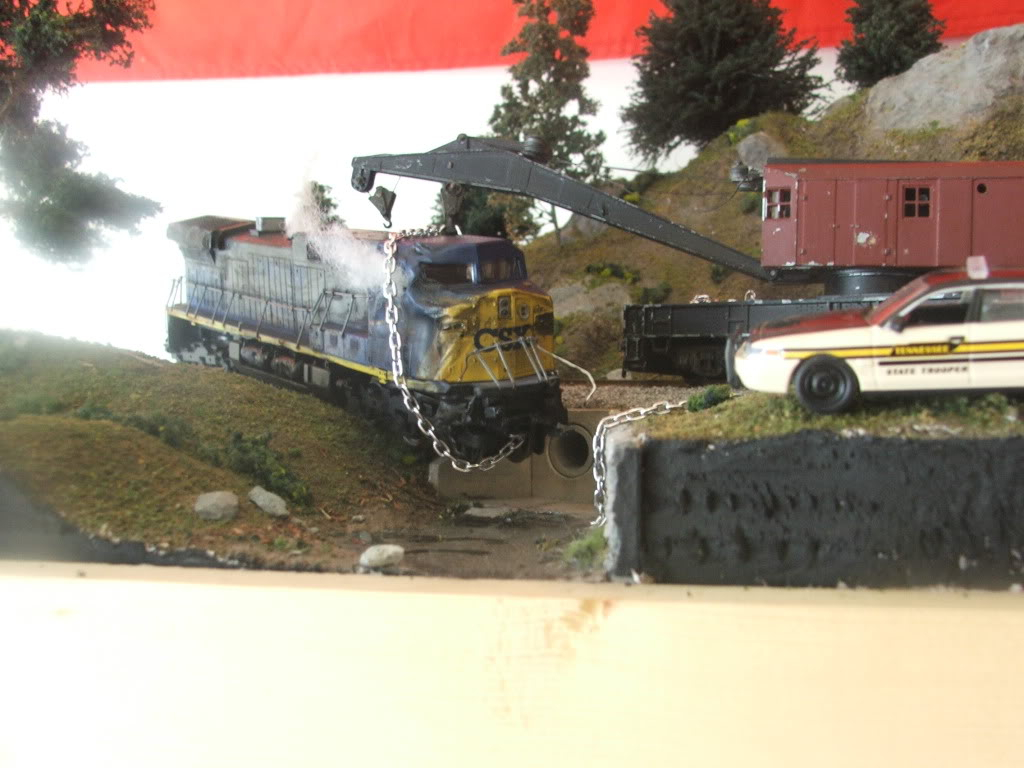 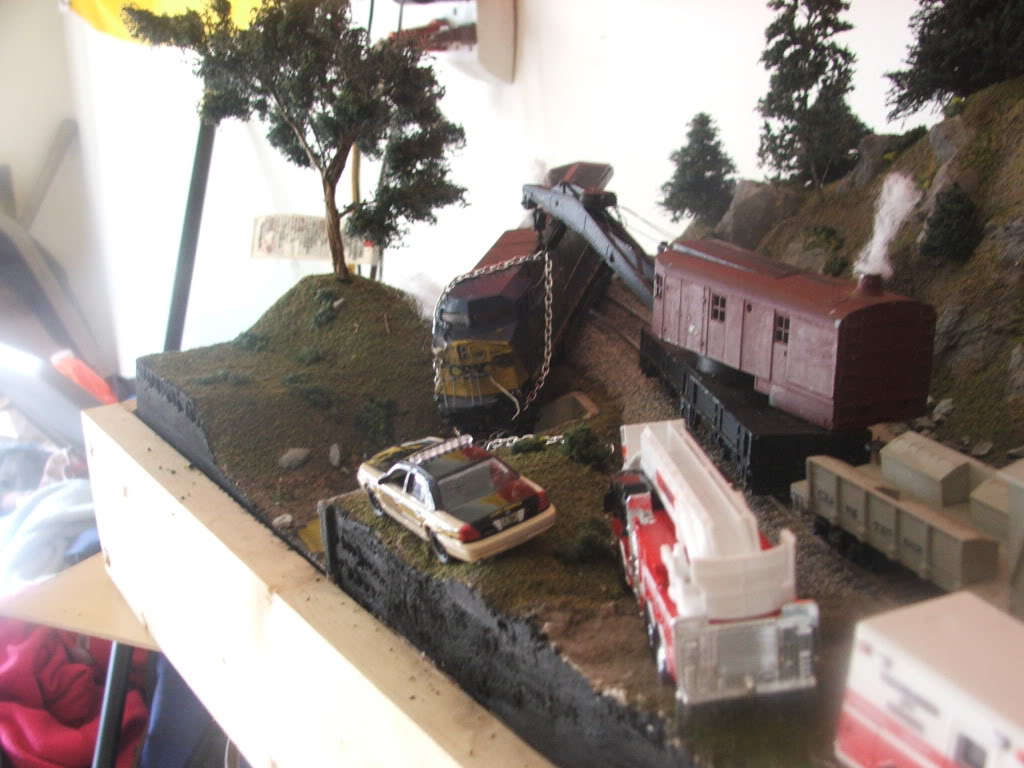 Kevin, I think it looks absolutely fantastic!. Great job on crinkled bodywork. It looks very real. And I like the scene also.

And good idea for something that was probably headed for the trash.

Well thank you micheal was starting to think no one was going to say anything on it.

I like it too! Nice job on the engine looks very realistic. My only suggestions is the chain looks too big for the scale to my eye. Just my .02.
-Art
T

Personally I think the frontal cab damage is good, but the side of the cab looks suspiciously like it's been held over a lighter (very smooth deformation). My suggestion would be to heat it so it is soft somehow, maybe by holding it under boiling water, then deforming it with some pliers or something. Using a naked flame afterwards would be good though, as the burn marks it'd leave would make it appear as though there had been a fire! On that note, your weathering gets a 10/10 from me.

Also, I agree that the scale of the chain is a little off. It's not terrible but there is always room for improvement. My suggestion would be to buy a cheap necklace with very small links. Oh look, my partner has been kind enough to "volunteer" some of her jewellery.

That loco is N and the links are a bit ornamental, but you get the idea. She has another necklace with the standard shaped links such as the chain in your picture, but as small as the ones above - it would be perfect! If you poke around in the female section of any large department store (K-mart, etc) you're bound to find something cheap & useable.
Last edited by a moderator: Sep 29, 2011

Thanks guys for your thoughts. I do have other chains just went for the heavy duty chain look.The weathering was done with artis chalk.As for the smoke I would think there might still be alittle smoke or not. Just couldn't thin that stuff out and still catch it in the photo. Thanks again guys!

Kevin, I liked your idea so I went out with my diorama and took this quick pic. ^wow! Looks great Jerome your chains look way better than mine and that caution tape really sits it off too nice fast display Jerome .

Kevin, just some extra chain I have in a drawer. I save everything!! LOL

Kevin, just some extra chain I have in a drawer. I save everything!! LOL
Click to expand...

Pretty neat pics. Got distracted by the Marine Corps flag though.

Pretty neat pics. Got distracted by the Marine Corps flag though.
Click to expand...

thank you.. yea been in going on 7yrs now.

Looks really good and like said above, you need a smaller chain.

Keven, in addition to being smaller, the chains need to be a bit toned down with a little rusty color. Great idea you had.
V