I've had this train show treasure boxed up in the storage tote for a few years, and I think it's time to do something with it.
I have already done the mundane tasks, such as adding Kadee #148 whisker couplers, and Intermountain metal wheels. It's very smooth rolling now and couples and uncouples like a charm. 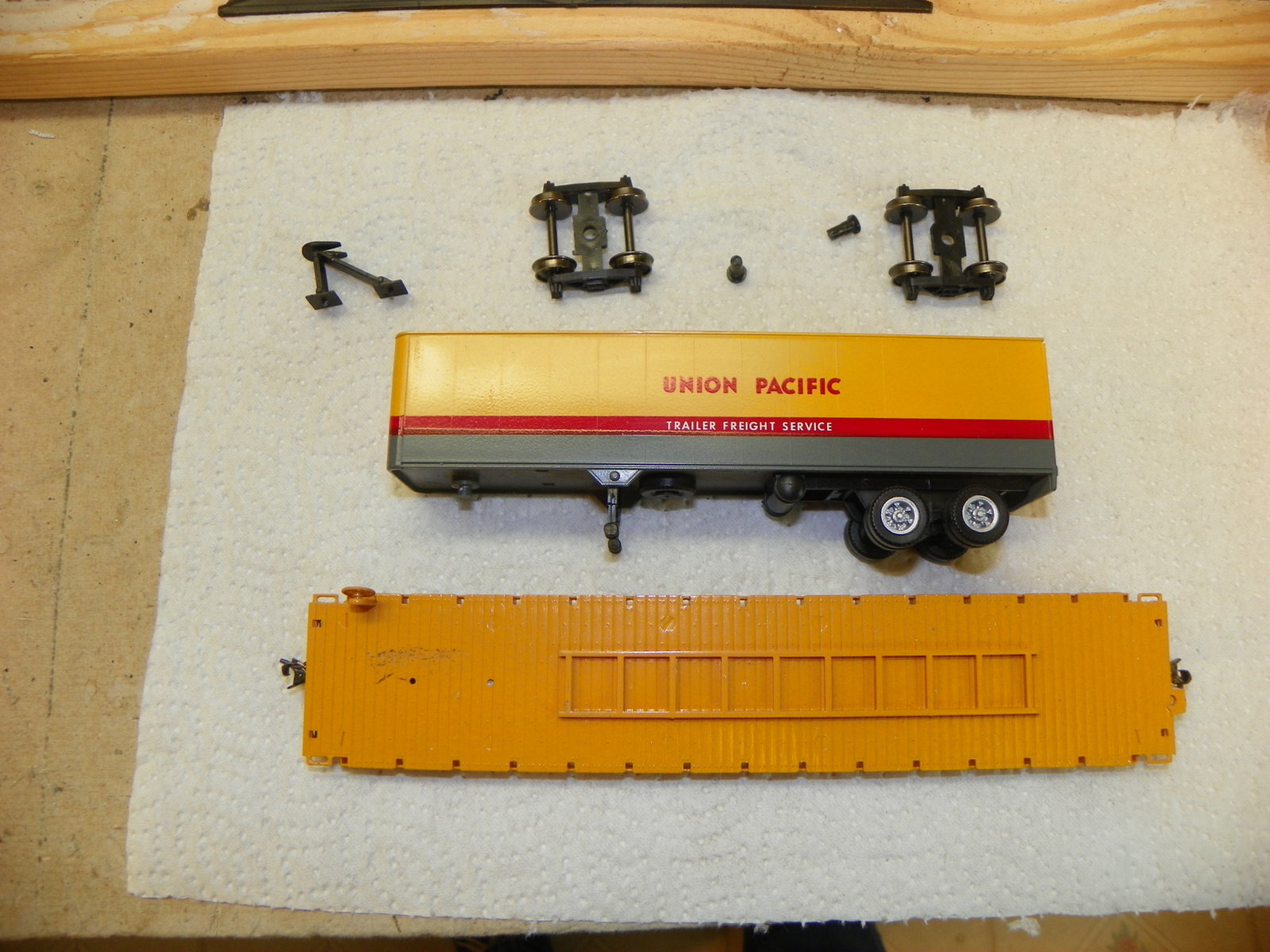 I put it on the scale and it was 1-3/4 oz. too light. I was a bit concerned about where I could hide that much weight on a flatbed, and then discovered that the top of the trailer can be removed. So I added 1-3/4 oz. of Harbor Freight Special wheel weights inside the trailer. Adding weight that high above the deck is not the best way to do it, by any means, but my options were pretty limited. Ya does what ya gots to! 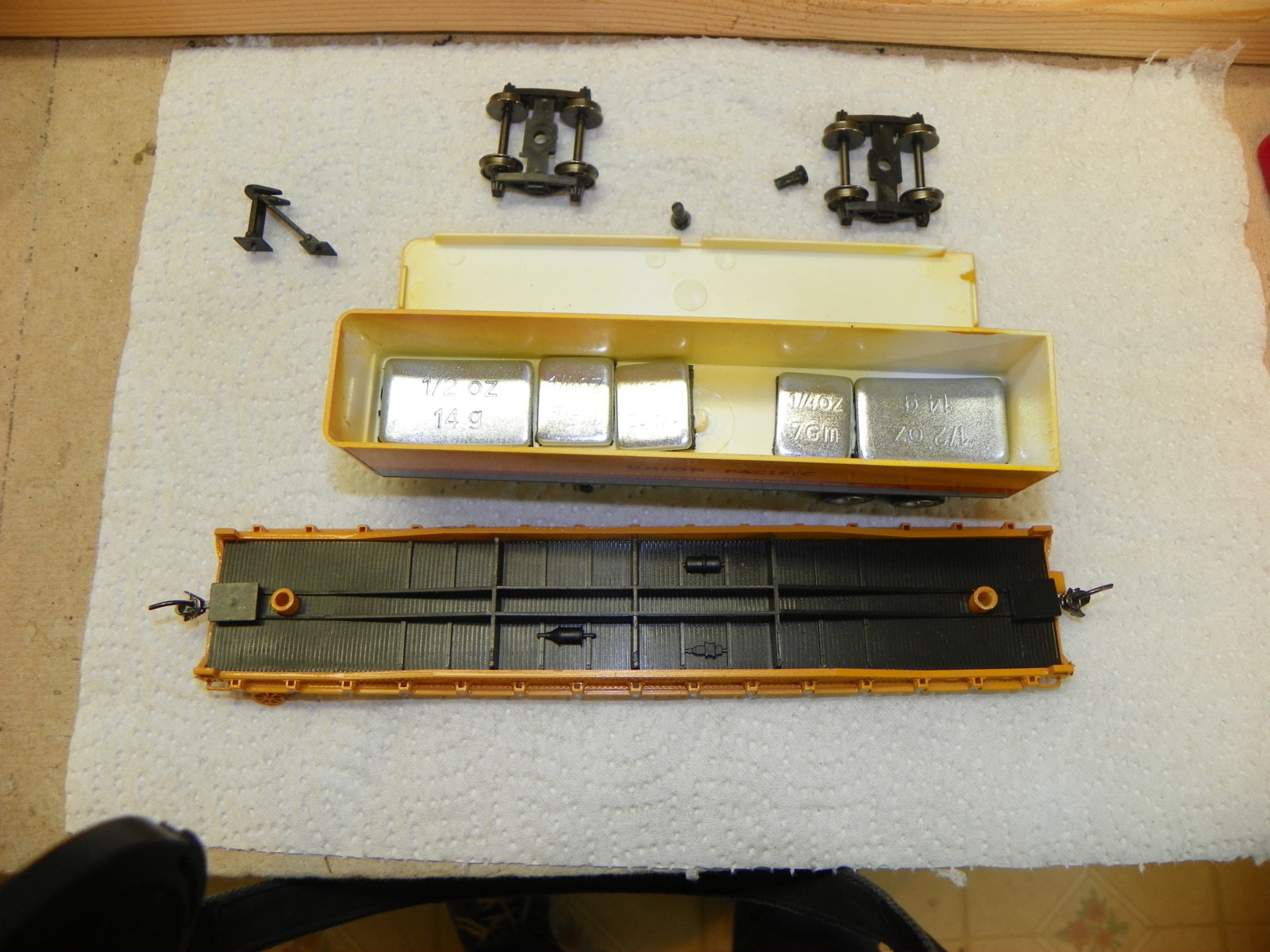 The coupler box covers are held on with a friction pin cast into the center of the cover. You can see the molding mark on the covers in the above pic. I think what I am going to do is add a couple drops of white glue on the side of the box, one per side, just to keep the cover from falling off, but still allow for removal if needed.

Here the car has been washed with soap and water, and rinsed thoroughly. From this point on, until final sealing with a flat clear coat, the model will only be handled with gloves on my hands. This keeps fingerprints from showing through the paint, which can be a problem particularly for acrylics, which is what I use. I will sometimes paint small details by hand with enamel, but I never spray enamel. 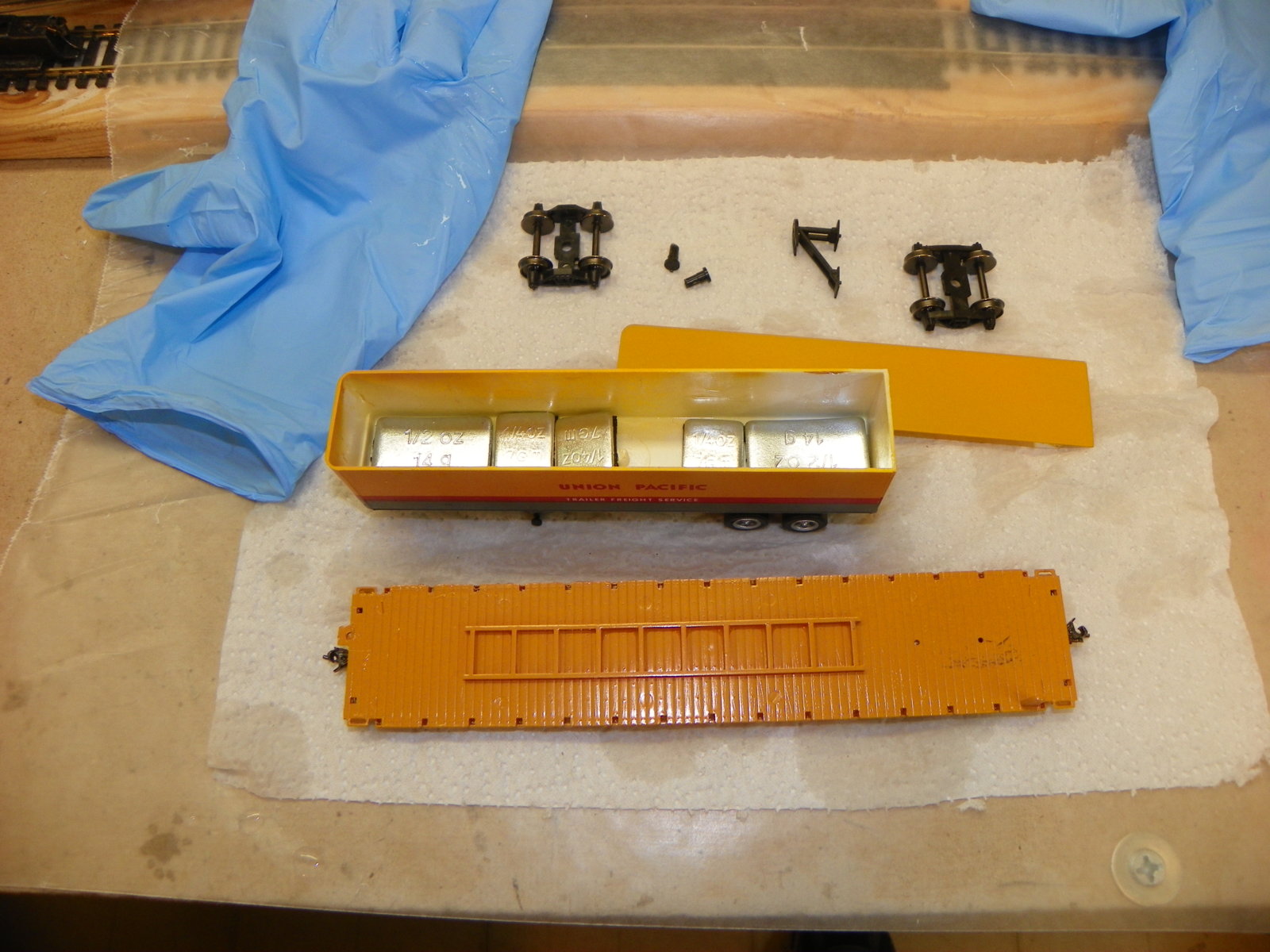 I will allow this to dry overnight, then it will get a fade coat of 50/50 thinner mix and Testors Light Ghost Gray acrylic. I don't plan to fade this car too heavily, as it would have been fairly new in the late 50's, which is when my layout is loosely based. (Extremely loosely! ) 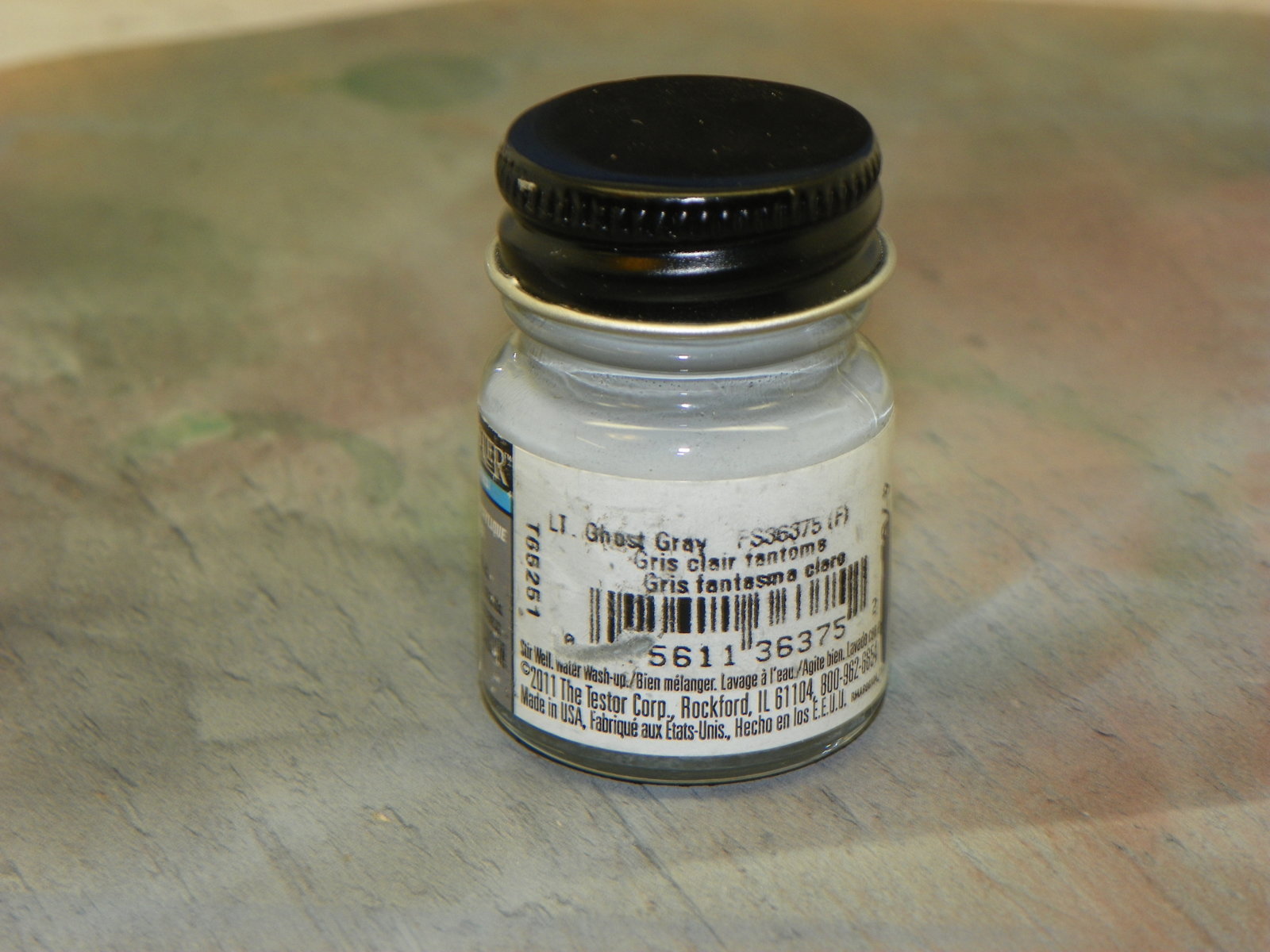 I pick up a bottle of this every time I go to Hobby Lobby. I have this bottle, and 5 more unopened in the bin! My LHS doesn't stock this color, so I get it from Hobby Lobby. Might be time to lay off for a while.
The trailer will get a light fade as well, but not much dirt. Trailers are generally kept fairly clean.
The deck will be weathered, though not heavily, and some black marks made to indicate where the tires rolled. The sides of the retainer on the deck will get some black scuff marks from the tires.
This should look good when it's done!

I got the fade coat on the flatcar and trailer. It came out pretty good on the flatcar. The paint spattered some on the trailer, though. I deviated from my normal practice of shooting the paint at 30 psi. I had it dialed down to 15. I don't think that was enough to properly atomize the paint, plus I may have been too far and the paint had partially dried before it hit the model. The little trailer was done at 30 psi, with the paint diluted with 25% distilled water, no alcohol. The isopropyl alcohol, even diluted 50%, may have been causing the paint to dry too fast as well. But I think the lower psi was the main culprit. Oh, well. Live and learn.
The flatcar deck will get a wash of gray, and then a very thin wash of India ink. It's not going to get all scarred up, though. 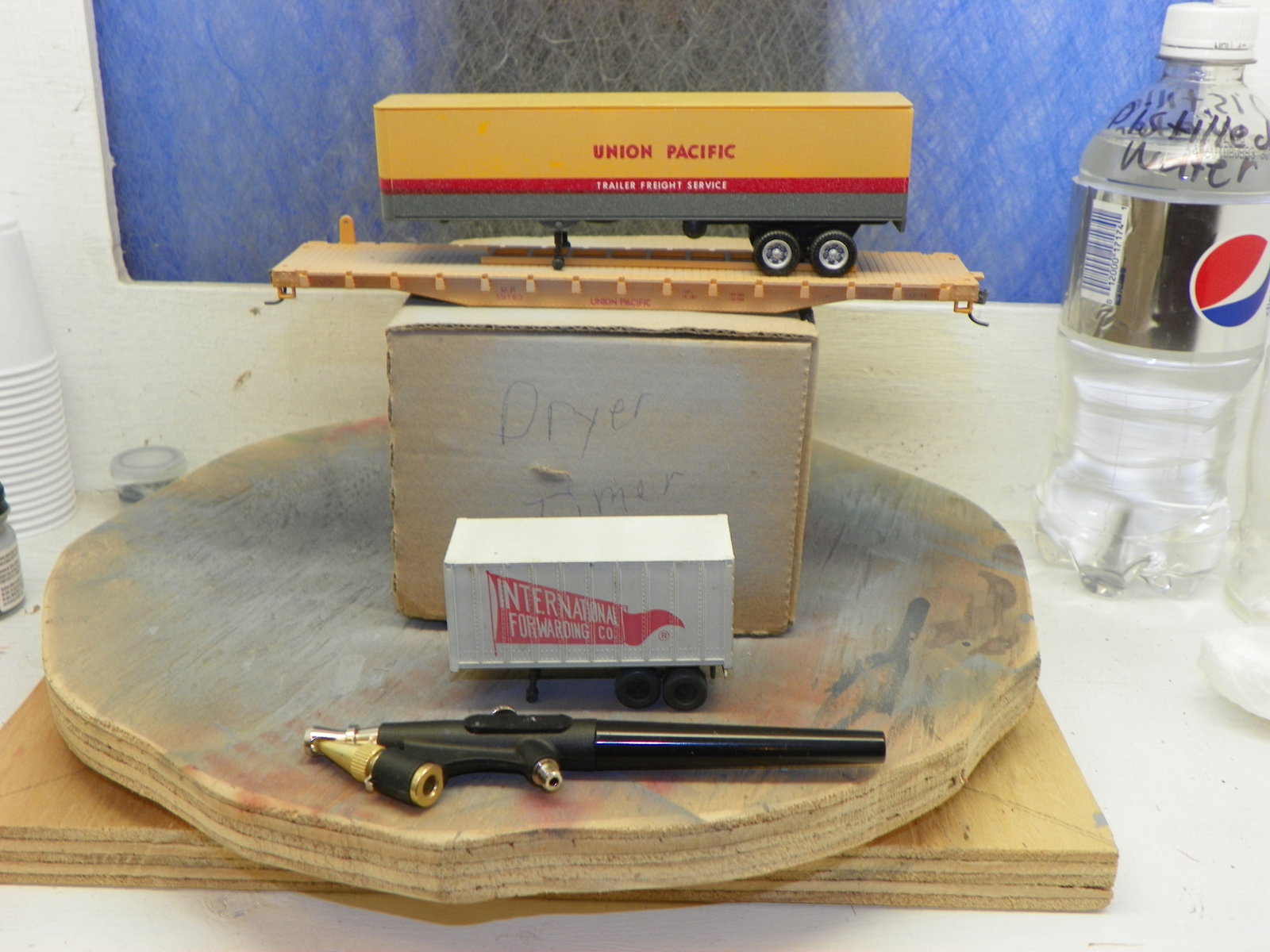 I also did some experimentation as to what would remove dried acrylic paint from a model. My first try was acetone. I do NOT recommend it!
It stripped the acrylic, the decal, the original paint..... All instantly with very light pressure. Use at own risk on models you dislike! It did a great of removing a dried acrylic paint ring from the inside of the airbrush color cup, however! 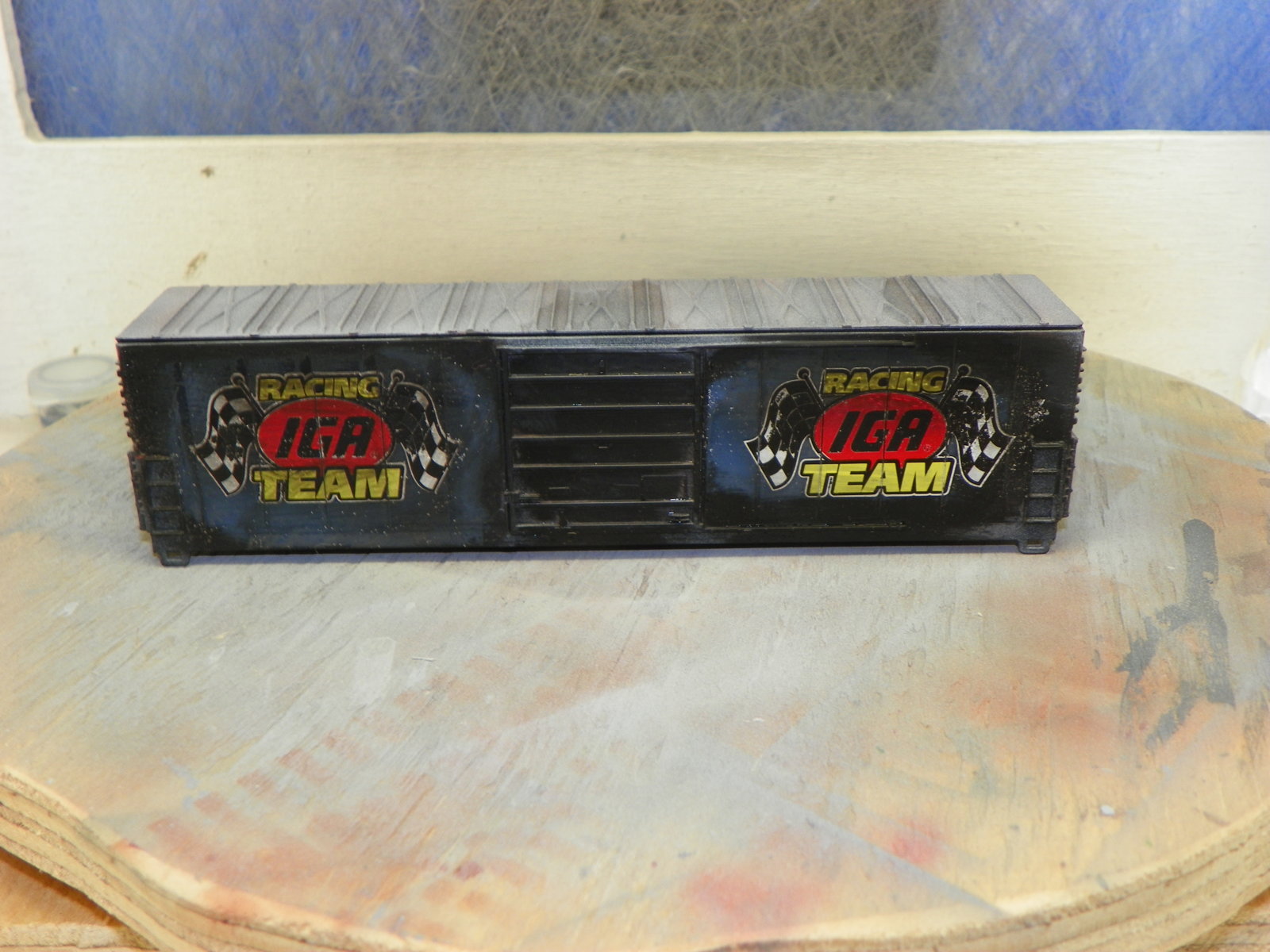 On the opposite side, I actually tried three different chemicals. On the right, I used straight 91% isopropyl alcohol. I had to scrub a bit with it, but it did remove the paint. It also discolored the decal.
In the middle, I used low odor mineral spirits. It didn't do anything.
On the left, I used denatured alcohol. I barely wiped the surface, and the acrylic paint came right off. It did not affect the decal, however. You can see the difference in sheen of the decal between the two sides. Both of the alcohols did dull the paint, though. I do not know if this model was painted with a gloss black paint, or if it has a separate gloss clear coat. It's a Life-Like model, so I'm guessing it was painted gloss black to save money at the factory. 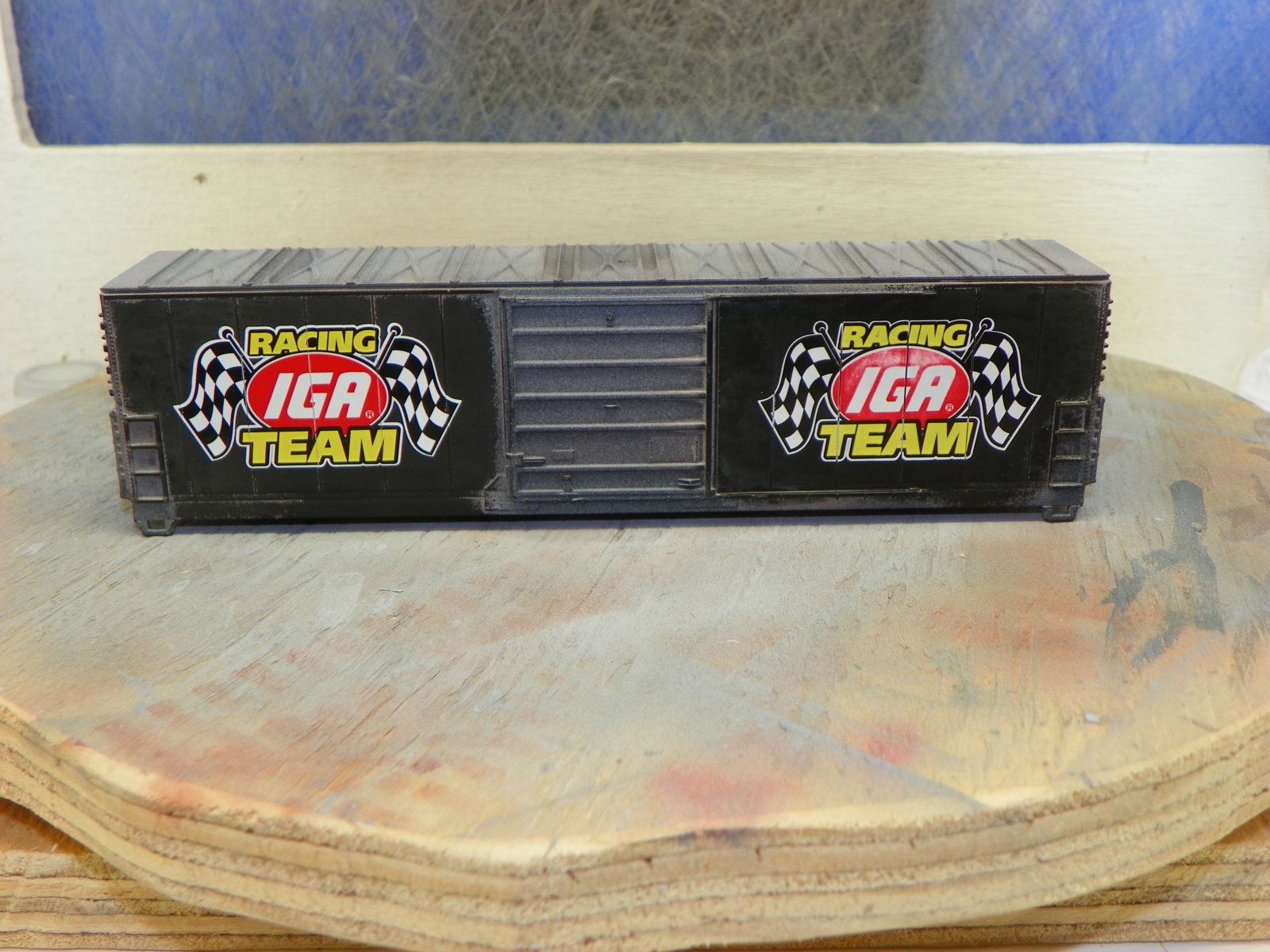 Maybe someday I'll strip this down and do a repaint and decal job on it.

I gave the flatcar deck a wash of light gray, followed by some India ink. When that was dry, I gave the deck a good dusting of gray pastel chalk. I know it looks pretty heavy in this pic, but it will tone down a lot when it's sealed.
Before sealing: 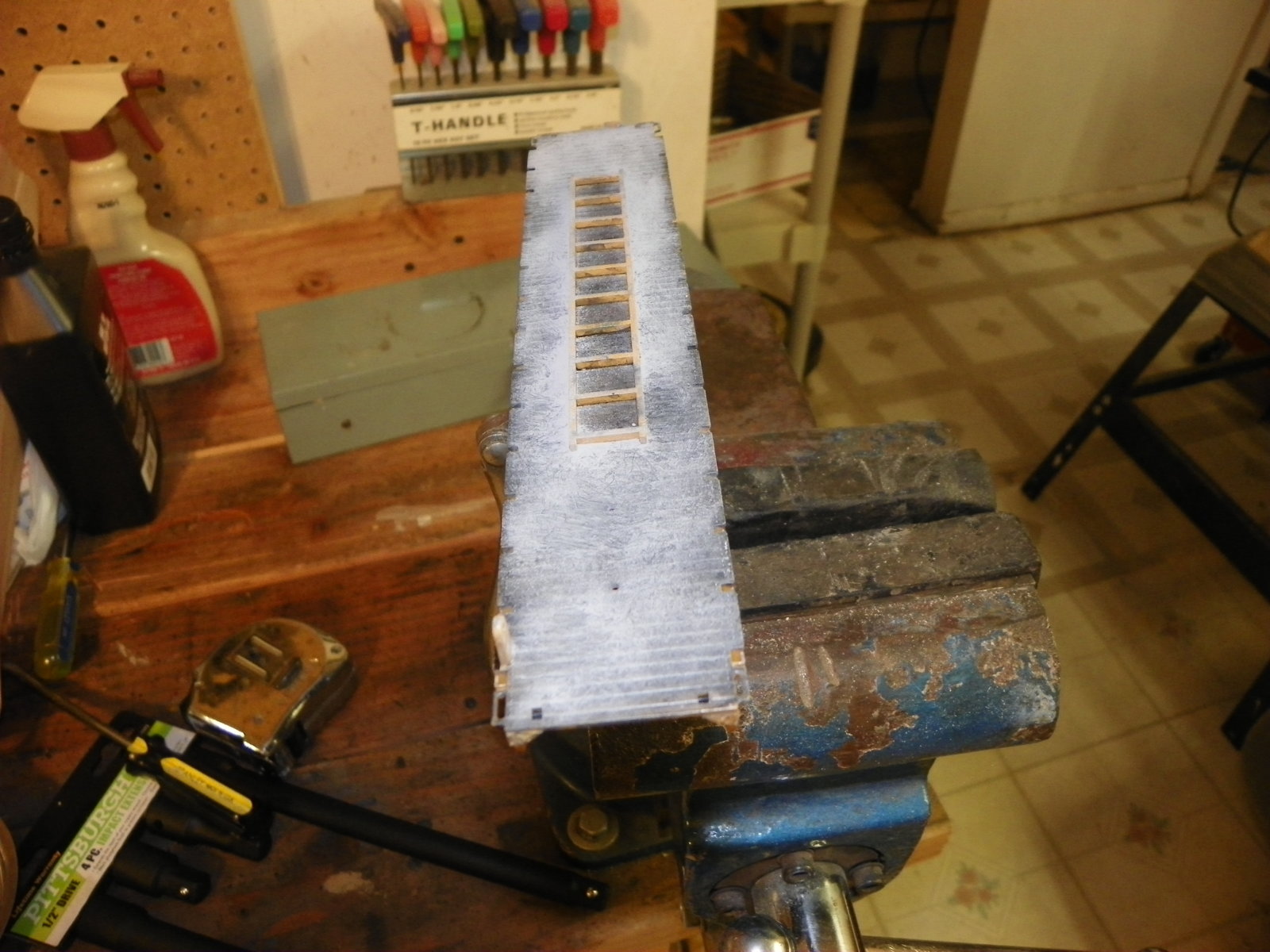 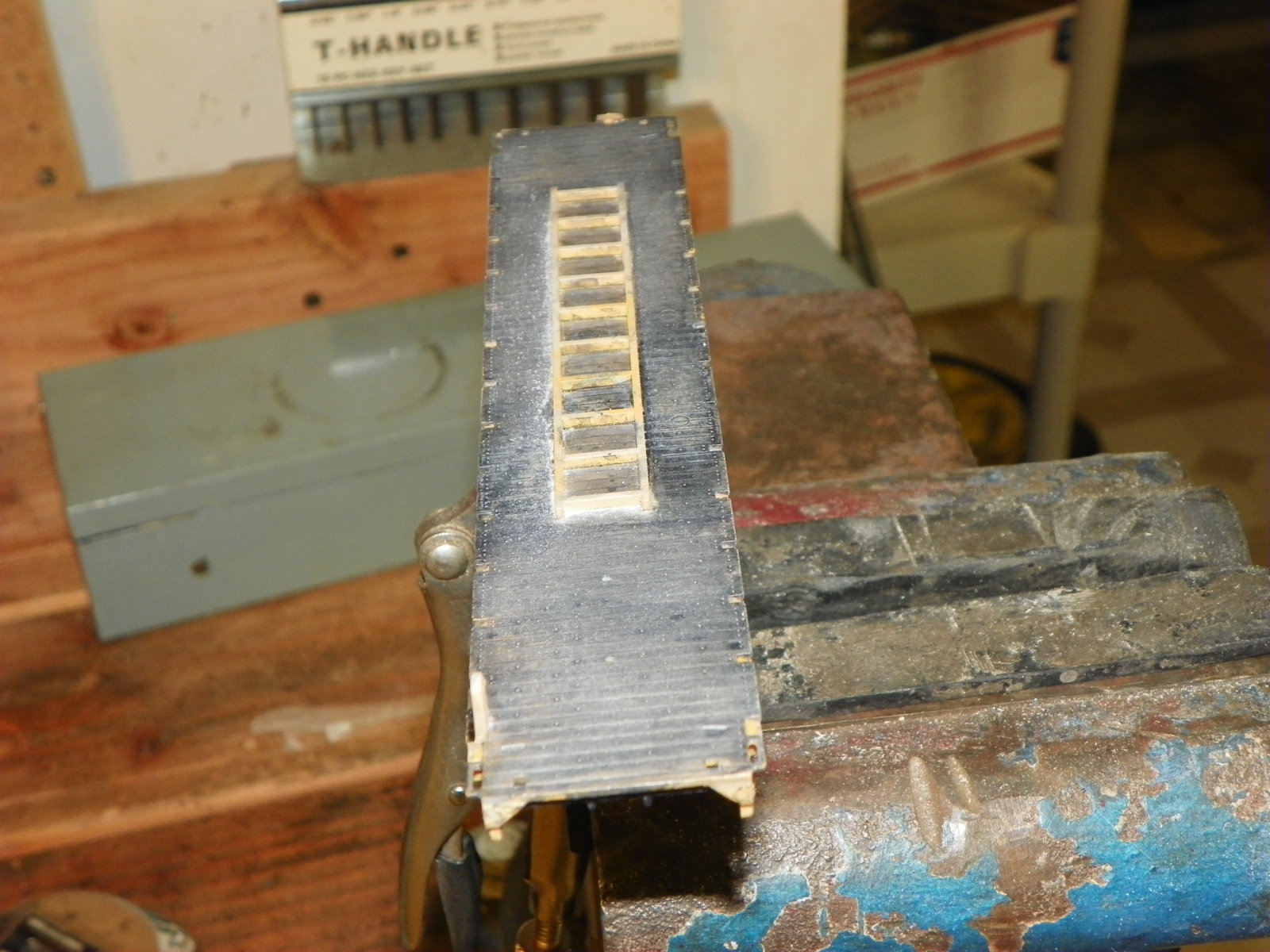 Nice and weathered and dusty!
I gave the trailer a good dusting as well, but most of it faded when the clear coat was applied. I think the Rust-Oleum matte clear didn't agree too well with the paint on the trailer. 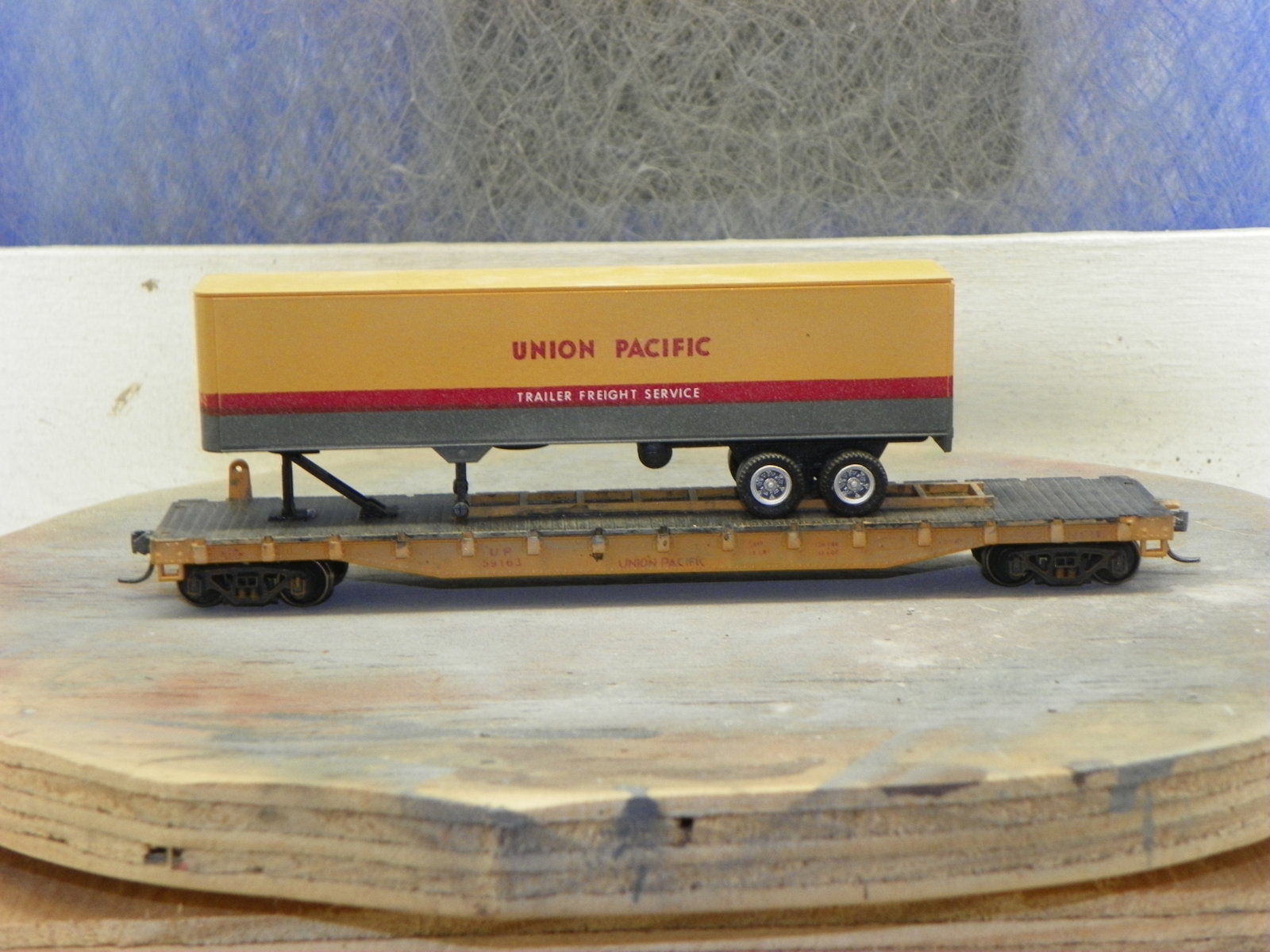 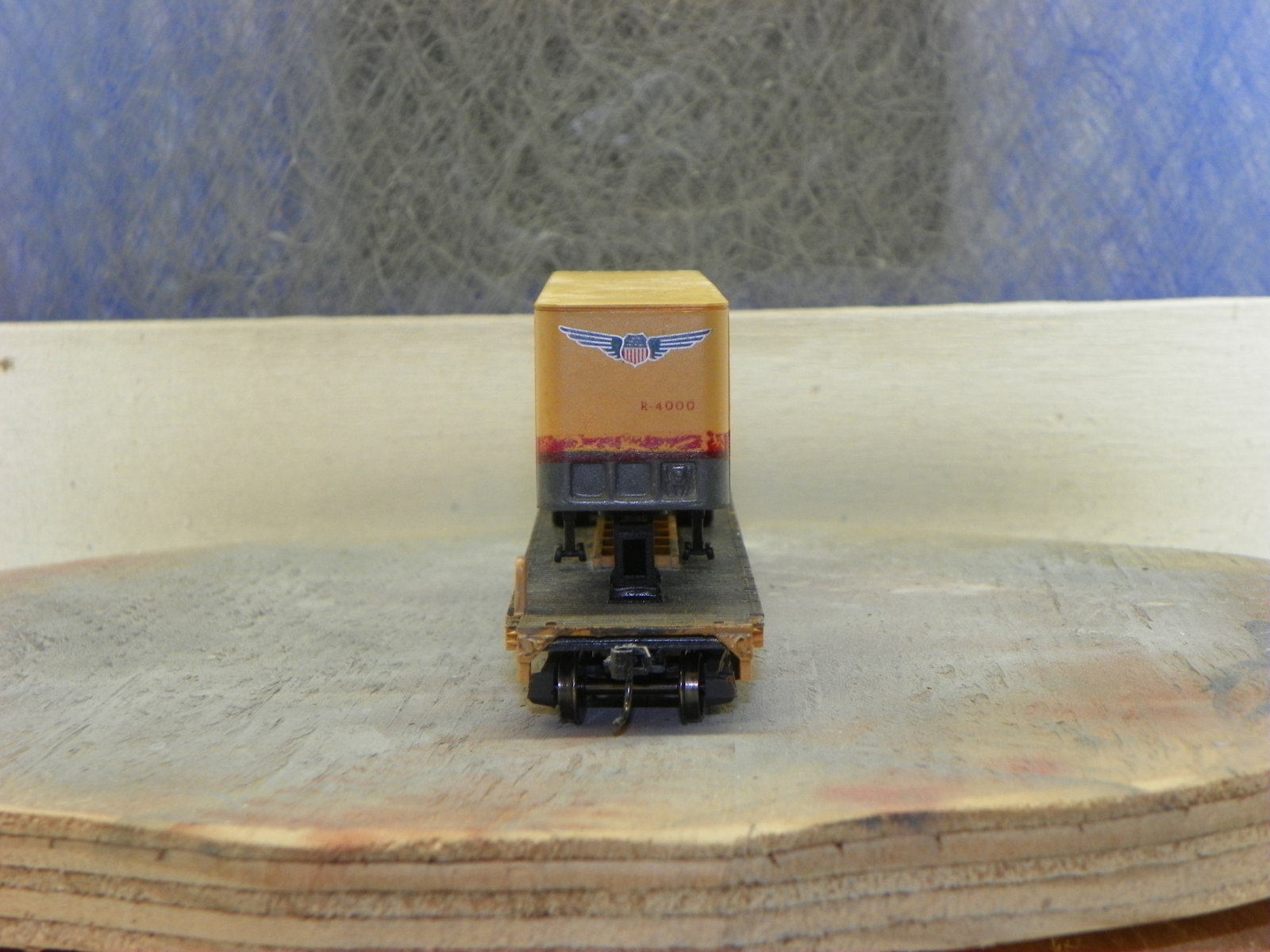 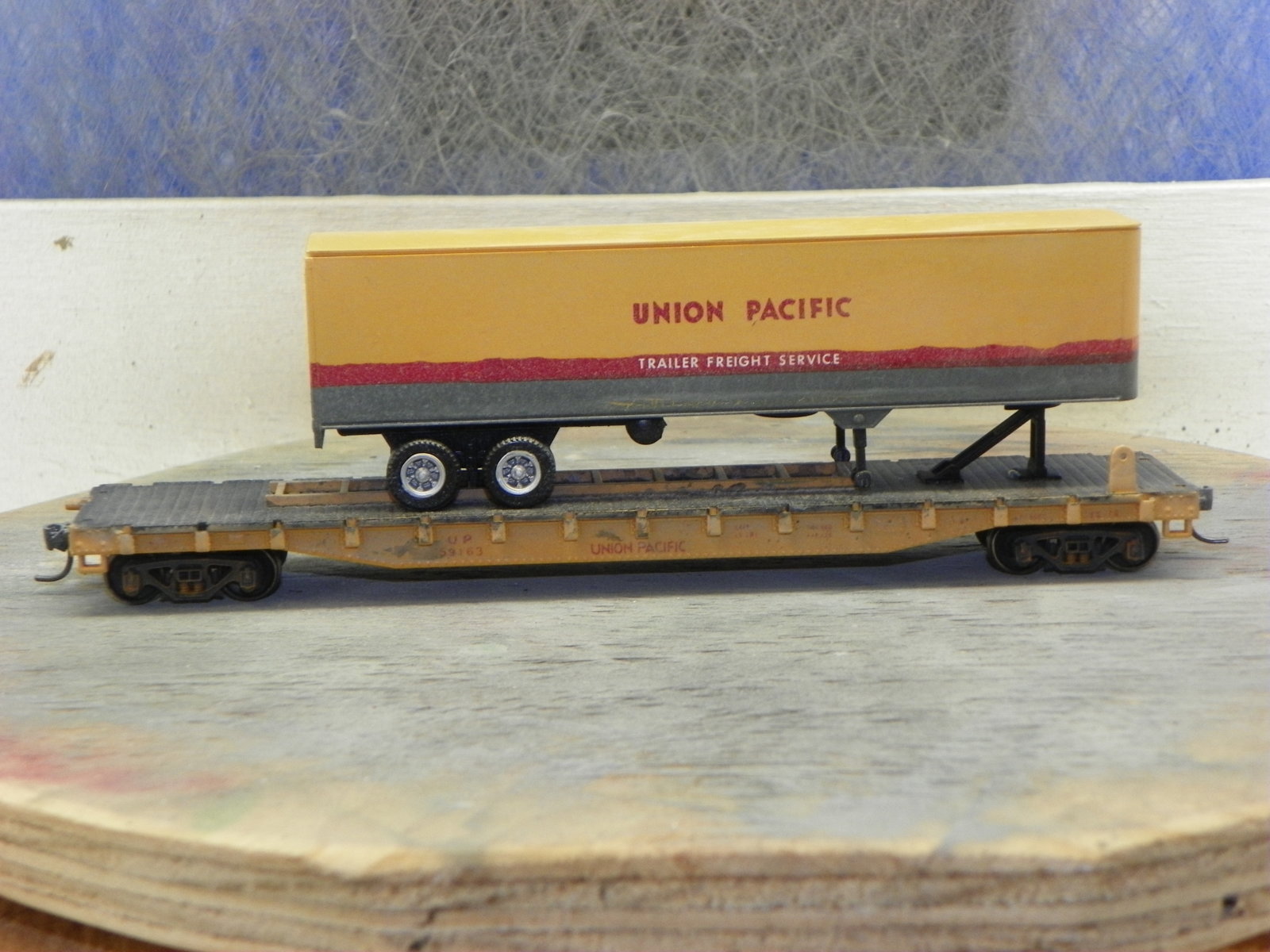 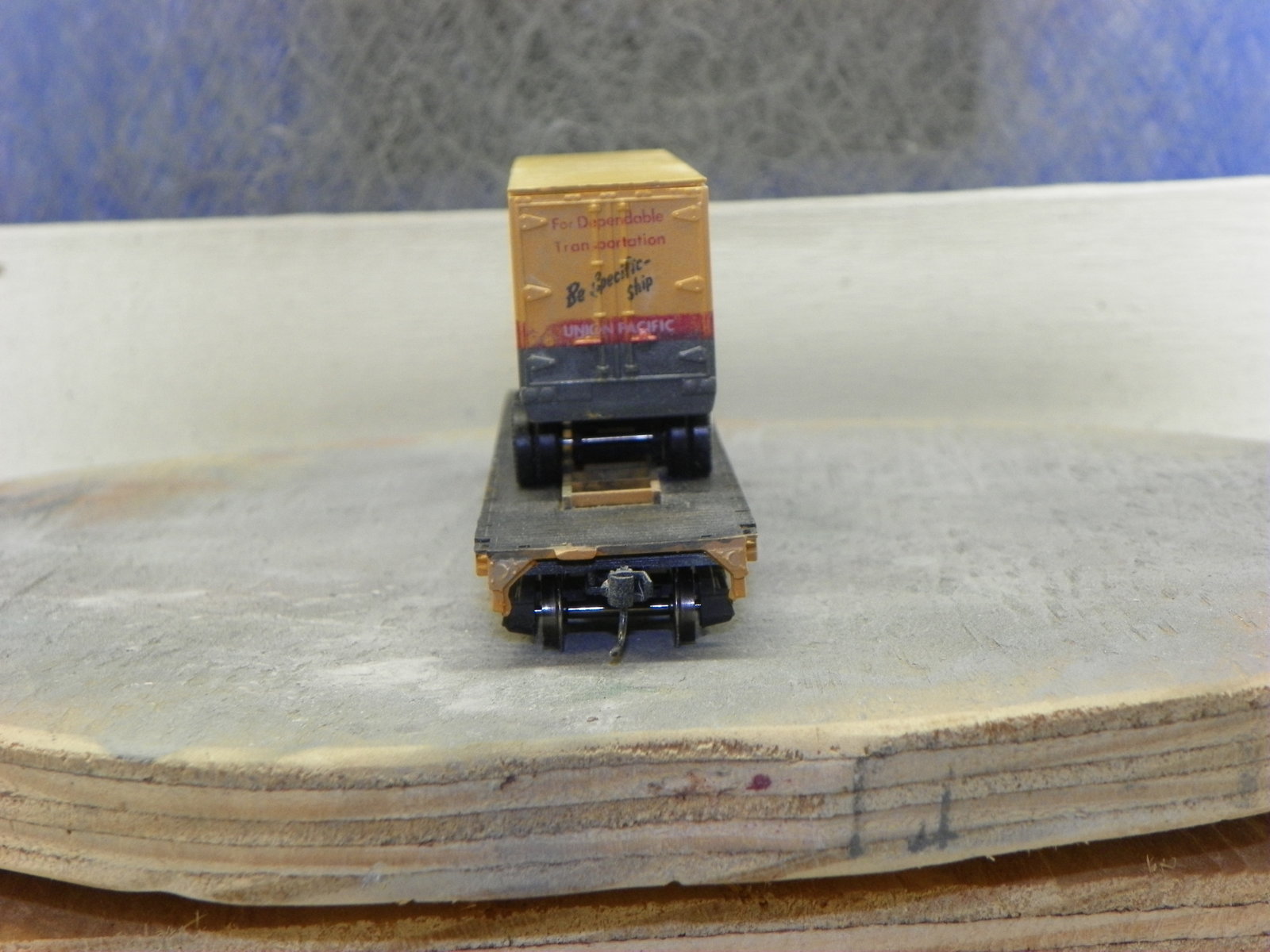 I still need to do some hand painting on the trucks. The 5th wheel support will get a coat of grimy black, and the tires will be dry brushed grimy black to tone them down some. I need to do some painting on the couplers as well. It also needs a brake wheel. I don't know where that went. It wasn't in the box when I bought this at a train show.
I know these were circus loaded, where the trailer is backed onto the flatcar by a tractor, but what I couldn't figure out was how they got that 5 wheel support under the trailer. Those things have to be massively heavy! Then while doing some research I found this pic, and got my answer: they folded flat! 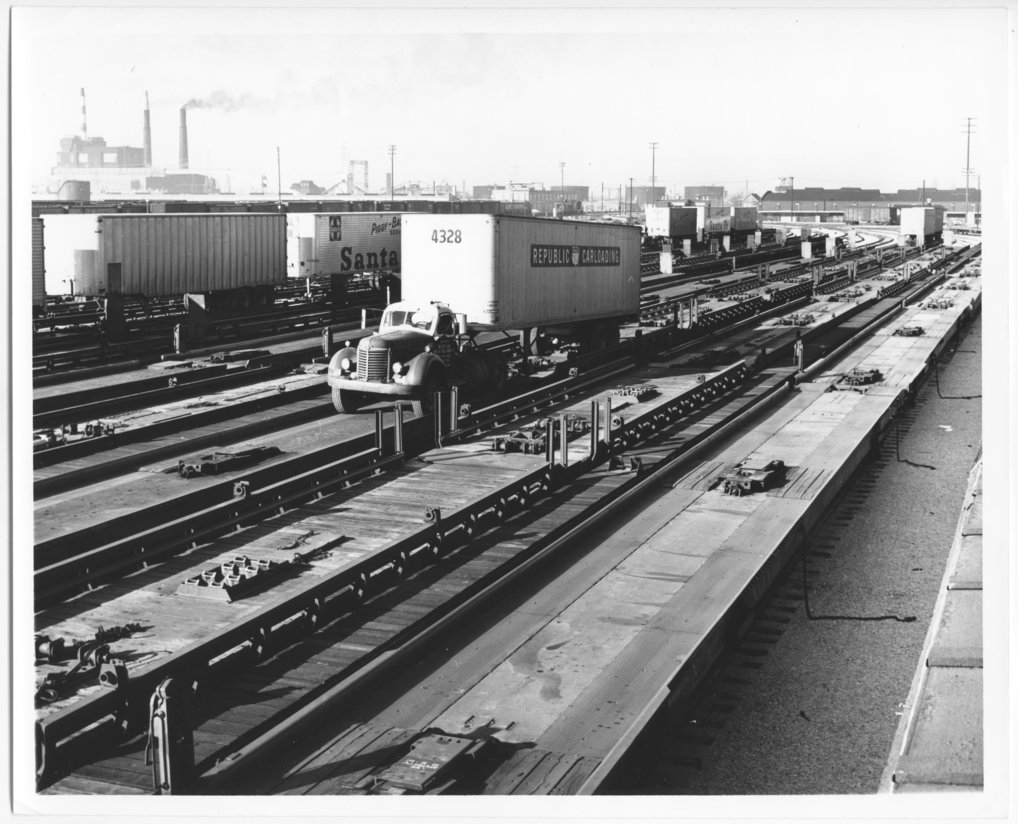 You can really get a good look at the one in the lower center of the pic.
I hope they had some powered method of raising those! I'd hate to be the poor schmo that had to do it by hand!
E

Suggestion/question: Will you add the folding ramps that connected the cars for circus loading? There were two per car on opposite corners. 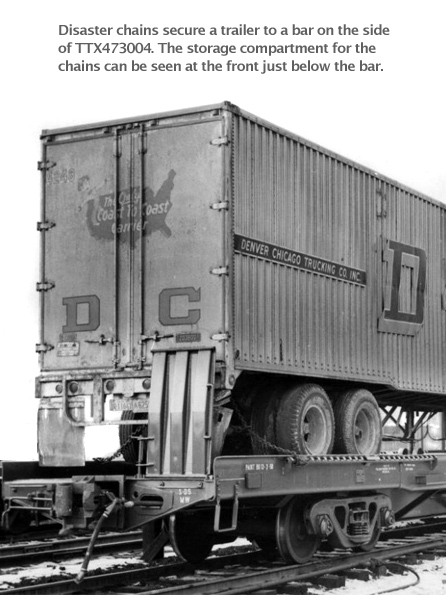 If you have problems derailing or the trailer falling off with the weights that high, you could put them on the sides of the trailer down low. Just distribute them equally.

Espeefan said:
Suggestion/question: Will you add the folding ramps that connected the cars for circus loading? There were two per car on opposite corners.
Click to expand...

That's a good idea about the ramps. I hadn't thought of that. I'll have to think about the chains, too. Thanks for the suggestions!

josephbw said:
If you have problems derailing or the trailer falling off with the weights that high, you could put them on the sides of the trailer down low. Just distribute them equally.