Coming back to the hobby

I have been into MRR and trains since I was a kid. I've had a few layouts, a 4x8 when I started out and then went onto a modular point to point when I was in the military. I got out of the hobby for a while due to all of the usual stuff, kids, work, space etc.. Now that I have been authorized some space, (13' x 18'), the most I have ever had for a layout, and I have the time, I have decided to reenter the hobby after a 15+ year hiatus.

I have always modeled the UP and other western railroads that they interchange with. After thinking about what I want to do, which is mainly operations, I dug out a few of my old MR magazines and found Jim Hediger's article on the UP's East L.A. subdivision in the August 1986 issue. After reading it and studying some of my other UP books and magazines it really struck me that I can now model what I have always wanted to, yard and industrial operations along with a true mainline run. I have only been able to do this when on a club layout when I was in the military. Now I can build my own!

A lot has changed in 15 years. I found AnyRail and have been playing with it while also brainstorming ideas. So here is a start to my rendition of UP's East L.A. subdivision. I'm more than likely going to freelance a lot. So this will really be more "inspired" by the UP's East L.A. subdivision. This is the upper deck. There will be a lower level (never had that before, lol) along the perimeter. I haven't decided if I want to double deck the whole thing to include the center peninsula. The track plan is still really being thought out. What I have here is really me playing with AnyRail and checking radii. But at least you can get the idea.

Again hello. And if this is like any other forum, I'm sure it is a vast storehouse of knowledge. 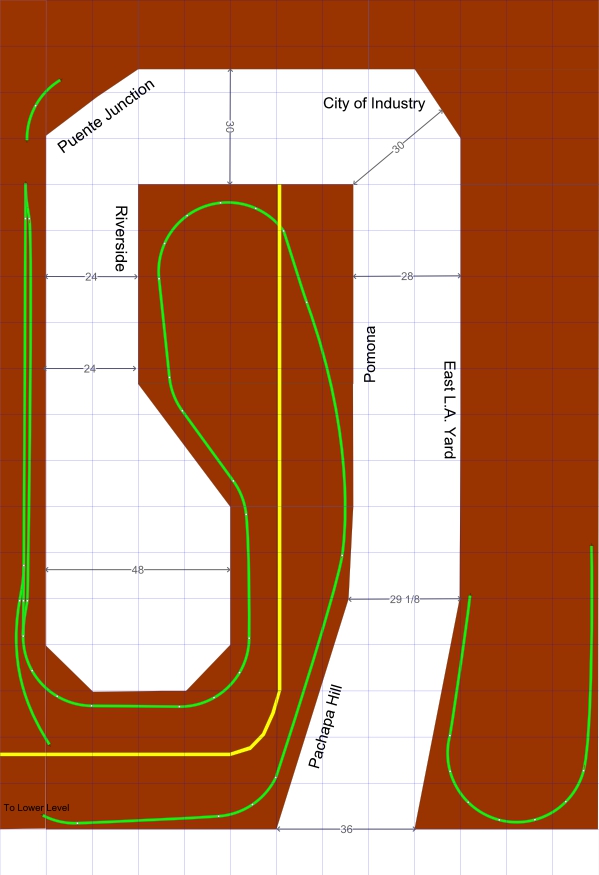 Welcome aboard Z. I see that you have actually been a forum member since 2012, don't be so shy!
Benchwork plan looks good, although that aisle on the left is going to be a little tight if you have fellow operators. Looking forward to your progress.

Ha! Thanks guys. I guess becoming "active" is more accurate. The trains never really let me leave their orbit I did join the forum in 2012 thinking maybe that was the time, but alas it was not.

Now there is a "fee" for this space I have been granted. I have to clear out a bunch of stuff from the basement and take down some shelving put in by the precious owner. Hopefully I can repurpose some of that lumber and I guess this provides motivation to get it done. You know what I'll be working on today.

Welcome back to the group! Looks like a nice amount of space to accomplish what your after. About what era are you shooting for?

Migalyto- I am looking at modern era, Mid 80's to 90's. I like the locos and operations of that era and it is the time I grew up watching trains. I guess we tend to gravitate to those times we remember growing up.

I have always been fascinated with the Centennials and Fast Forties. I even modeled them in the past and still have my heavily kitbashed Athearn SD40-2 "snoot" that I built. Just need the pair of DDA40X bread to make the "sandwich".

Welcome back to active modeling.
I can understand your plan to remodel your layout space. It looks like you have spent a lot of time planning.
Look hard at the existing shelving to see if you can use it as you start construction, either as temporary storage space or as recycle material for bench work.
I moved into a new home a couple years ago and had a 4' wide x 10' long x 5' high stack of boxes and material from previous layouts. The rest of my basement train room was full of moving boxes and furniture. It took a year to start building new bench work. I built shelves and storage to organize myself. I even found some structure kits I "lost" about 15 years ago.
Don't spend all your time planning, make some sawdust and screw together some lumber!

Welcome back Z, your mrr story sounds almost identical to mine [although I'm a generation older]. I got the 'bug' when I was 12 and read my first copy of RMC; amassed a nice collection of Athearn Blue Box locos which I ran on the club layout (no space for a layout in my parents' house). 15-year hiatus started when I joined the Navy, went to college after my 4-yr enlistment, fell in love and got married. The "light bulb" came on one day as I was walking past a hobby shop, that with my wife's and my combined income - I could once again actually afford trains!


zkr78 said:
. . . I can now model what I have always wanted to, yard and industrial operations along with a true mainline run. . .
Click to expand...

That's what I'm modeling in my 24x24 semi-finished garage...two 'heavy' industries, main yard with a loco terminal, and ~30ft of main line with a bunch of smaller lineside industries hanging off of it. But my pike is based on the B&O in Cleveland, OH.

Looking forward to seeing your build. I see you're planning to represent the town where Plastruct is manufactured.