Broken switch - is it repairable?

So to set the background on this situation, I purchased this layout and my skill level is novice.
Whomever designed this layout really never thought much about doing track repairs. The lower level has a reverse loop and is unfortunately constructed such that it is nearly impossible to get to the lower level. The boards for the track are continuous and access to the rails on those boards is nearly impossible to reach. The rails are so high up against the next level that you can't see them without using a mirror and even then access is very, very tight.

So, the turnout on the lower level reverse loop is broken. I believe it to be an Atlas turnout but I'm not certain. It's operated by a Tortoise. The hinged point has come undone and the point on the sleeper ties where the actuator slides is also come lose from the small metal clip. I'm hoping to attach some photos (done with mirrors I might add).

I'm certain I can get the joiner and "squared" end of rail reconnected without too much problem other than cussing a blue streak at having to work in such a confined environment. The bigger issue is reattaching it to the clip on the actuator. I don't believe I can realistically reclip it because I just don't think I can get to it well enough to do so. Alternatively, can I superglue the rail to the clip? Or can I tack it with solder (and not melt the plastic actuator throw where the clip is mounted)? Or am I really screwed and going to have to cut it out and replace it altogether? 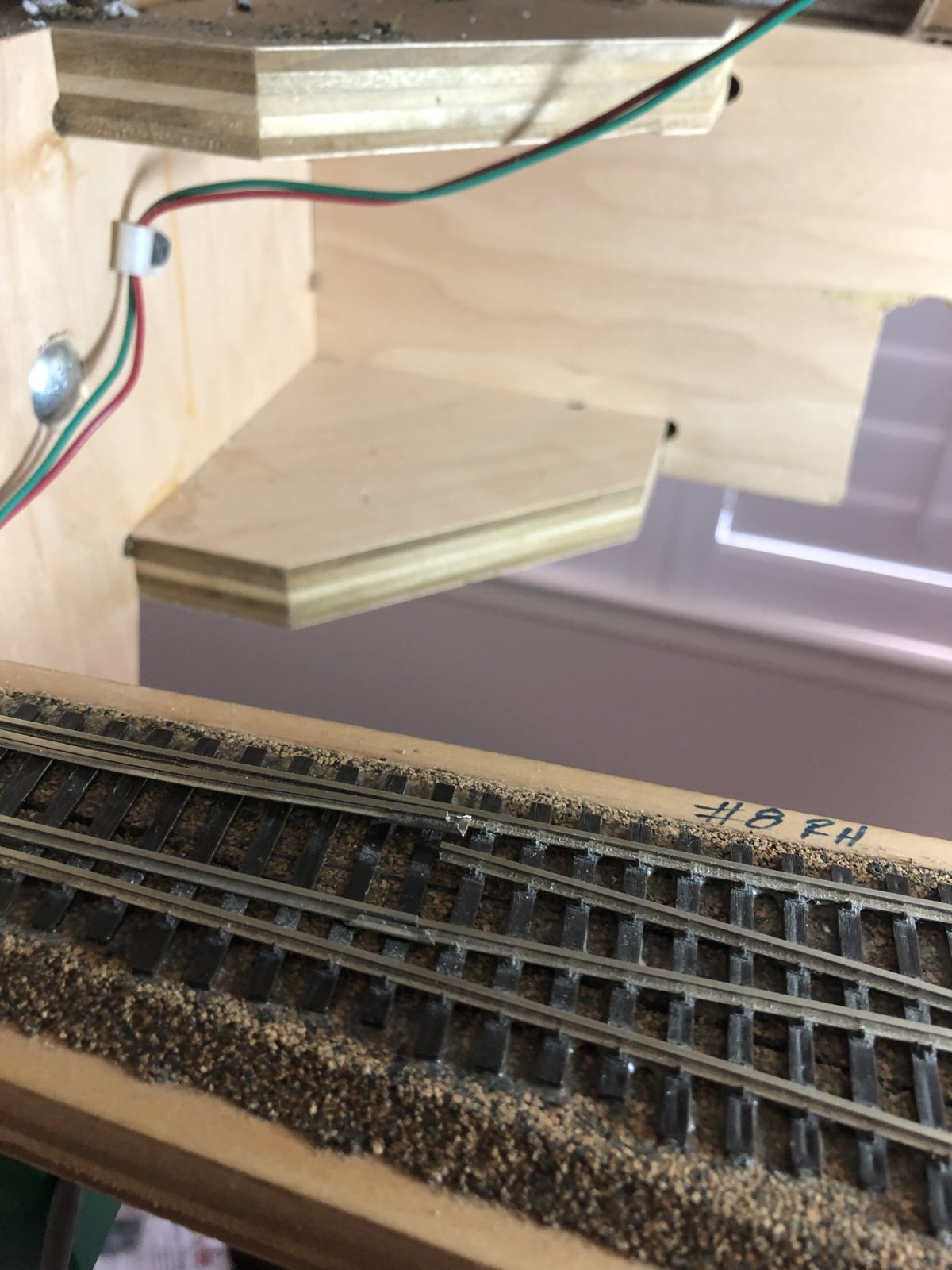 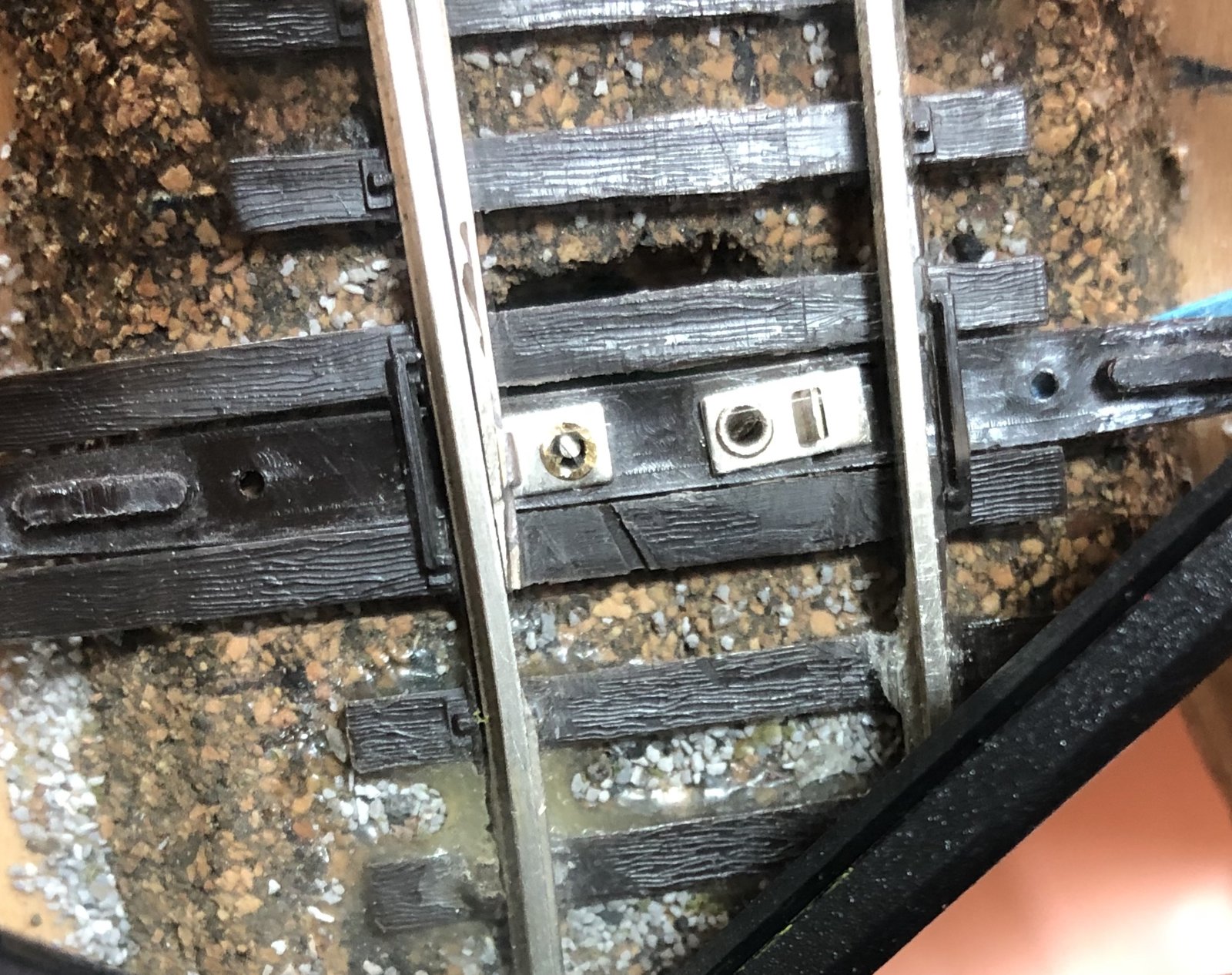 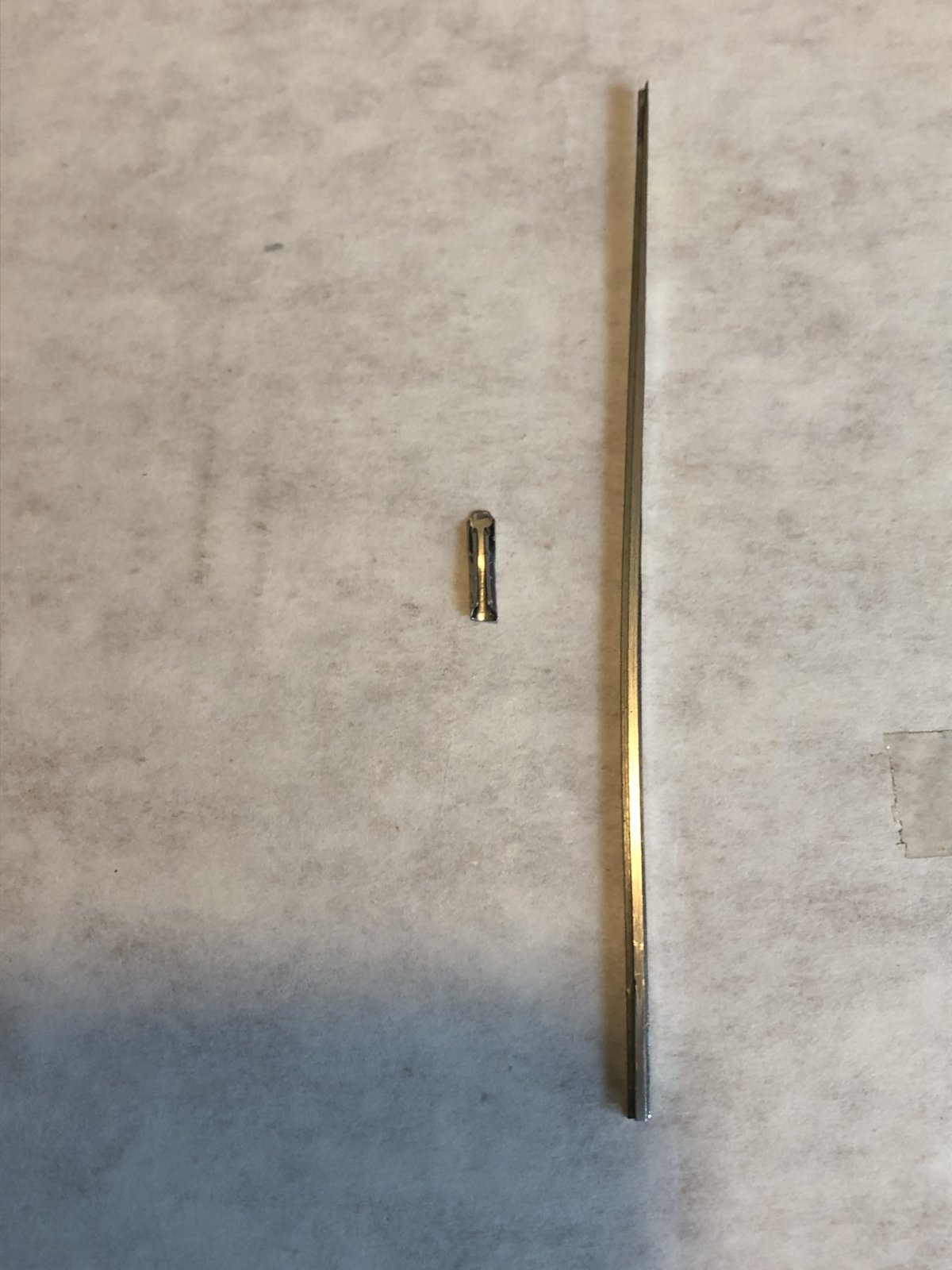 You have an interesting dilemma. I have to first say that I have never seen a manufacturers switch that uses rail joiners to connect the switch point rails to the closure rails. I don't see why it wouldn't work though. Your greater problem is getting the switch point rail reconnected to the actuator. Since the rail joiner should provide an electrical path, I don't see why a dab of Super Glue wouldn't work on the actuator end. Set the rail into position under the metal clip first and possibly use the blade of a small screwdriver to press down on the metal clip. Given the confined quarters, this is not the ultimate answer, just a beginning. Then carefully dab some glue using the tip of a toothpick on the joint, being especially careful not to get the glue on any other components.
Good Luck.
T

You probably could reconnect the point rail to the closure rail. Reattaching it to the throwbar is going to be a challenge, given the close confines. You might be ahead in replacing the entire turnout. It apparently is a number 8, but the fit will depend somewhat on the brand. If that is an Atlas, it is a much older one. Best of luck with it.

it would be easier to replace it, depending on what it is ...
but you can get individual parts to repair that, or just take apart a donor switch

Can you get us a couple pictures of the area you have to work in?
I see the switch is glued in too.
I'd take a razor saw or Dremel, or whatever and cut it out. You should be able to get a new one in and slide joiners in place. Looks. Like an older Atlas code 100?
Personally I believe a repaired switch may give you trouble down the line.
E

I could fix that, but I'd solder the point to the throw bar, not glue it

I couldn't get a full size soldering iron between the roadbed and the bottom of the upper level.

Fixed with SuperGlue. How durable will it be ??? Who knows ...

StevieWonder787 said:
I couldn't get a full size soldering iron between the roadbed and the bottom of the upper level.
Click to expand...

I use a 40 watt pencil iron. I take the broken point rail off, clean it with a file and tin it with solder where it sits on the throw bar, then I tin the throw bar. File off any excess solder. Replace the throw bar, and throw the switch so that the throw bar is against the stock rail. Apply heat to the point rail at the throw bar. Use paste flux. Voila! I've done many this way, but super glue will work...for a while. Unfortunately it is best in tension, and terrible in shear. Good luck!
T

Espeefan said:
I use a 40 watt pencil iron. I take the broken point rail off, clean it with a file and tin it with solder where it sits on the throw bar, then I tin the throw bar. File off any excess solder. Replace the throw bar, and throw the switch so that the throw bar is against the stock rail. Apply heat to the point rail at the throw bar. Use paste flux. Voila! I've done many this way, but super glue will work...for a while. Unfortunately it is best in tension, and terrible in shear. Good luck!
Click to expand...

Had a similar problem with a Shinohara turnout! I also used paste flux containing solder, and a small pencil iron. So far so good! The Shinohara turnout (at least the one in question does use rail joiners where the point rail connects to the closure rail. I also just had a problem with the throwbar on an Atlas Mark IV #4 LH, which connects to the point rails by a small projection on the underside of the throwbar. For some reason, the projection came out of the pivot hole in the point rail on one side of the turnout. I looked all over for a replacement turnout, but after removing a pair of overpasses, and the turnout, was able to reconnect the point to the throwbar. We'll see how long that lasts. Probably have to order one from Walthers or TrainWorld, just in case! LHS, which normally carries a great variety of stock, is temporarily out of the lefthand Mark IV. Plenty of righthand ones, of course!
R