Another "Design my Layout" thread?!

Hi everyone, I need a layout designed for me. OK, GO!

Just kidding. So I joined here a couple years ago and had planned on being more active both on this forum, and on working on a layout. I just haven't managed to find the time since then, but am working on remedying that starting now. For now, I'm looking for advice on an HO design concept I've worked up thus far. I have done basic plywood-table layouts before when I was a kid, but this will be my first foray into a true layout with benchwork and scenery. I'll try and provide some info to help with the design, and explain some of my preferences:

The Space: Spare bedroom measuring roughly 21' x 13', however that includes two closets, so the useable space is more like 14' x 13'. I don't plan to live here forever, so I'm not planning on knocking out walls or removing a closet to make more room for now. There are two doors that access this room, both on the west wall, one between the closets.
-Also, I need room for my hobby workbench in here as well, so I effectively need to leave a corner of the useable space open, preferably adjoining a window (north or east walls) for venting the spray booth. 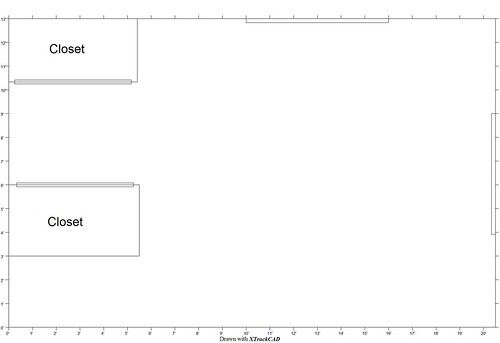 Requirements:
-Target of 28-30" max radius curves (yeah, I've got some long rolling stock), although I can deal with slightly smaller ones for industry siding leads, etc. Easements: yes, I've been using the "Sharp easement" calculations on XtrkCAD.
-Max continuous running. Yeah, I know, where's the realism in that. But most of my friends who would be coming over to play trains probably won't understand a switching layout, nor would (someday maybe) the kids.
-Code 83 HO rail, probably Walthers, Peco, or something similar for flextrack and turnouts.
-DCC, probably with an NCE system. This will also be something new for me, but I've been studying up on it.

Era: Well, let's call it "generic modern." I'm not particularly attached to a specific era. I already have a closet full of rolling stock and locomotives, and most of them are post 1980's. I've generally collected stuff with the intention of putting together a train that is realistic by itself in terms of power and cars (i.e. not mixing modern auto-racks with wood boxcars and pullman sleepers), but I do have a few lashups behind E and F units that date from the 50s. So in other words, I'm planning on doing scenery that mostly fits modern freight equipment, but won't look too out of place if a CB&Q mail train goes rushing thru behind an E8.

Features I'd like to have:
-Double-ended yard. Yes, I know that the space is not conducive to such a thing, but I figure a small pocket-yard might be possible. Staging will likely be on-layout. I've placed the yard below in the area with the best reach from the room. Don't fixate too much on the yard design below, I just threw together a basic diamond yard with a couple bypass/departure tracks. Exact yard layout TBD.
-Lumber yard or transload facility; I have some wood-products equipment that need this.
-Small grain silo or grain bin facility; for grain car fleet.
-Small intermodal container facility; for small intermodal fleet. (Something like this, nothing fancy: http://www.railpictures.net/viewphoto.php?id=299134 )
-Rock quarry, gravel pit, or some sort of similar industry.
-Not too complicated in terms of construction. Originally, I sketched out something that had an additional mainline loop, but I was concerned about all the cross-overs that would entail. As it is, I'm a little concerned in the concept below already, and haven't exactly worked out elevations yet.
-My knees are still ok, so I don't have any problems ducking under the layout to access open centers yet.

So this is what I've come up with so far. I'm not an expert with XtrkCAD yet, so consider the dimensions, exact curvature, yard design, etc. just as estimates for now. Also, I might go with a compound yard ladder, but for ease of creation on the program, I just have a basic diamond one for now. The exact layout of the yard and service area/industry tracks around #5 are just rough for now. (The numbers on the layout are just for ease of reference to a particular area) I may also add more sidings/spurs etc. as the design evolves. 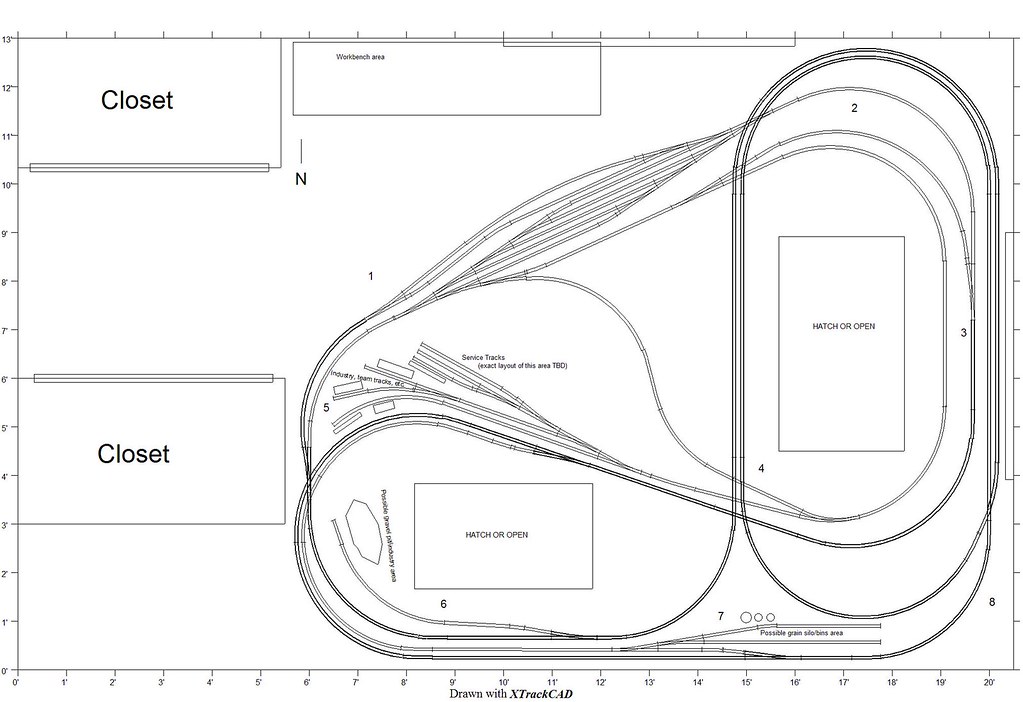 I haven't worked out all the elevations yet, but I'm planning on the yard and service area to mostly be level, with the N-S running main crossing over it.

Think of this as a general concept for now, but what comments do you experts have?

Potential negatives I see:
-No staging area. For now, I'm ok with on-layout staging, but in the future, I might consider the bottom SW corner for future staging. However, that will block off the main access door to the room (the other door, between the closets, requires passing through a bathroom).
-A fair amount of mainline track crossing over itself, in particular over the east end of the yard. However, I figure I can make it look somewhat like a yard "flyover," although it won't serve quite the same function as a true flyover.
-It's a little boring. Mostly wide curves and straight segments.

First question from me: There is a reversing loop coming out of the yard/service area. I understand that with DCC, a reversing module is used for that. Will that work, in this sort of arrangement, where the reversing loop also has other tracks branching off from it?

Thanks for any insight,
Eric

I am not an expert and I don't mean to "rain on your parade"; but one word, accessibility. You will not be able to reach any of the southeast corner, the northeast corner or the center of the layout. Anything over 32"-34" reach will be very difficult. It appears that you have several areas close to 48". Murphy's law says that's where you will have trouble. Depending on your layout height and your age, the trips to the hatches could also be a problem; especially if like many modelers, you store stuff under the layout.
Your negatives are not really negatives if just running trains is what you like to do. But if you consider them negatives before building, you might want to think about it some more.
willie

Yep those access hatches will get old real quick. Ask me how i know. I had those for two years and I finally got rid of them, and opened up the entire middle so I can operate from the middle.

You have a nice space for a layout. Don't do too much track, it looks like a spaghetti plate with your design. Less is more. Open up the middle and operate from within the middle section. A good place for a rail yard would be along the bottom 20' section. And add some industries so your trains will have a purpose on where to unload/load cars. 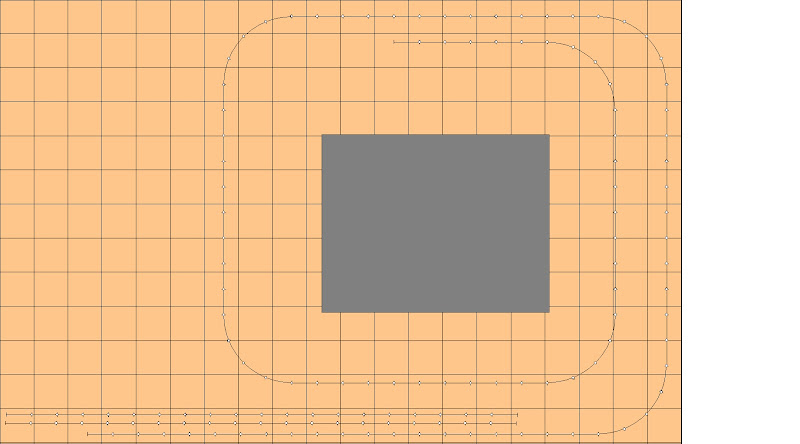 Yes.. accessibility is a problem in this trackplan.. but the elevations seem problematic, too.

As I look.. I just can't see how this all works; elevation/clearance-wise.. short of a "roller-coaster" appearance..

As advice.. I'd consider utilizing the "south" closet. No knocking of walls, just a couple of portals. It looks like the "south" door area is already compromised, and you can really open up the space..
B 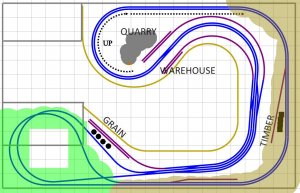 Just a rough idea, with lotsa operational potential.. a big, folded dog-bone, with both ends hidden in a mountain.. giving the look of two tracks entering a yard, than leaving as a double-main, that makes a climbing curve up to a scenically "seperate" upper level.. back into the mountain.

The lower area would have a few industries justifying the yard; making for some interesting local/switching work.. and the upper "level" would have a couple of spur industries serviced by either a local from the yard, or a mainline train.

Two operators could easily keep two, 30-car trains running safely apart.. and/or one train running/waiting, as the other works in the yard.. and so on.

Yeah, good points. Let me go back to the drawing board and see what I can come up with.
C

I have a 4x8 layout table bulit, but having a hard time design my layout. Could someone please help me. First time building one.

CP what scale are you in? There are a number of books and websites with 4x8 trackplans. Try the atlasrr.com website and do some searches on google.
T

I would suggest a point to point shelf railroad, make the shelf (or freestanding with legs) about chest height and no more than 24" deep, less if possible. That would give you room underneath for furniture and work surface. Use a narrow, easy to remove bridge for windows, doors, and walkways. This would give you large radius turns, easy reach to all locations. If you go with narrower shelf, 12" or less, you may have the ability to make it a doubledecker if you don't mind the long grade.