A visit to Seaboard's Hardwick Tunnel

After yesterday's ARG meet, Glenn suggested that we take a short trip to find the Seaboard's historic Hardwick Tunnel that's located between Odenville and Wattsville, Al. This track was home rail to the Seaboard's Silvet Comet passenger train. We had both read about it's facinating history in the journals of EL Voyles (MOW foreman 1912-1952) and the problems associated with the 180 degree curve on the eastern lead in to the tunnel. A road trip has been in the works for several months, so we thru together an impromptu trip. Interestingly, Glenn tells me that a train each way runs thru the area pretty much every day.

Some interesting background info from the journals of EL Voyles. http://www.rofilms.com/page62.htm

As Seaboard’s construction crews traversed their way west of Broken Arrow through the mountainous terrain, it became evident that two tunnels would be necessary to reach Irondale. In early 1903, Hardwick and Roper tunnels were bored. In an effort to save time and money, the big brass at Seaboard’s Richmond headquarters decided to build Hardwick and Roper tunnels to minimum standards. So the tunnels were supported by wooden frames cut from trees in the area. Keep in mind that in 1903, Seaboard had no tunnels anywhere on their entire system, so tunneling through mountains was not their forte. And they didn’t consider the consequences of using wooden frames positioned within feet of steam engine smoke stacks blowing out fiery cinders when an engine was pulling at speed. Seaboard ran its first train into Birmingham on December 5, 1904.

In 1909, they realized their mistake concerning tunnel construction when an eastbound coal burning freight highballing through Roper tunnel at track speed spewed an abnormal amount of fire and cinders. The huge wooden tunnel support system caught fire. Within minutes, the wooden supports were consumed by fire and collapsed onto the tracks. The Engineer stated that the firebox and stack were operating properly, so railroad officials blamed the incident on inadequate ventilation created by the narrow roof and side clearances created by the large wooden roof and sidewall supports. In early 1910, they hired an Atlanta firm to re-bore the tunnels and reinforce them with concrete, but because of the extra space created by removing the extensive wooden frames, the height and width provided an unheard of train to tunnel wall clearance at the time. Seaboard did not realize how important big tunnels were back then. But when some of America’s first joint railroad piggyback freights from the Frisco / Seaboard partnership rolled through the tunnels in the 60’s with clearance to spare, they realized how good planning in 1910 had paid a profitable dividend. I took over maintenance duties for both Roper and Hardwick tunnels in 1912, shortly after their reconstruction
The section of track between Wattsville and Odenville gave us fits. Seaboard was a powerful railroad with southern roots but when they built the railroad through the area known as Backbone Mountain west of Wattsville, they utilized a rail construction method known as “follow the contour” rather than merge the track with the terrain. This was great when they operated short trains, but when a 100 plus car freight pulled by four or five diesels snaked through the 180 degree turn and the back-to-back high angle curve tangents of Backbone Mountain, a tremendous amount of tension was placed on the tracks in both directions. Our crew constantly monitored the track in this section for breaks in the rail. One on occasion, several of our engines and about a dozen cars slid down the embankment when a rail snapped while the train was navigating the section between Hardwick Tunnel and “The Rope” as we called the 180 degree turn. We had a low speed limit on this section but the rail was prone to break after consistent high stress loads, especially in very hot and very cold weather. This short section of track helped spell the demise of Seaboard’s popular Atlanta to Birmingham line. When the merger between Seaboard and Atlantic Coast Line occurred July 1, 1967, this section of track was labeled as difficult to maintain by the home office and permanent low track speeds and multiple rockslides only added to the problems. We had installed slide indicators over the years between Wattsville and Roper to signal the Engineer of a dangerous rockslide. Slide indicators were made up of large cables connected together to trigger a red signal when a major slide occurred. But the newly formed Seaboard Coast Line started looking for ways to permanently eliminate the problem. The final blow came when a decision was made to route all Atlanta to Birmingham traffic on the old ACL route though Talladega and Roanoke and abandon the original Seaboard line east of Wellington. This happened long after my retirement.

The track alignment going through Hardwick Tunnel was also a tough section to maintain. Seaboard operated three tunnels system wide and two were in Alabama. Hardwick Tunnel enters with a slight curve going east into the tunnel portal and has a curve midway through the tunnel. So, it was always damp inside. We constantly checked the rail for deterioration created by long periods of moisture that accumulated inside the tunnel. By the time an Engineer could spot a broken rail inside the curved part of the tunnel, it was too late.

A famous St. Clair County train wreck happened in the 60’s at the cement plant at Ragland. That was a mess to clean up because several of the cement cars were buried completely underground by the impact caused when a mainline freight train collided with a local cement train working the plant.

Seaboard was forced to abandon the Coal City to Pell City branch line when railcar transfer negotiations with Southern Railway stalled. After several years of neglect, the line was pulled up and the ties and rails were scraped to businesses in Pell City.

Before I was assigned the Birmingham division, I handled the Roper division and my family lived within sight of Roper Tunnel. An elderly man who worked for me lived close by and he made homemade muscadine wine for all of us railroad workers to enjoy. In those days, Seaboard was running four passenger trains a day and six to eight freights.

Odenville was a flag stop for local passenger trains 5 and 6. Wattsville was a regular stop for mail. The conductor for eastbound train number 6 would drop-off lunch orders at Wattsville when the train stopped to load and unload mail. By the time the train reached Piedmont, a café located next to the tracks would have the food orders ready. The train would stop and pick-up food for its hungry passengers. The Silver Comet seldom stopped from Atlanta to Birmingham. By the early 70’s, most passenger trains in Alabama had been discontinued with the exception of Southern’s Crescent.

To give a bird's eye view of why this area was such a problem, check out the USGS topo of the site. The area circled in red is where the rail pics were taken. That's some convoluted track! 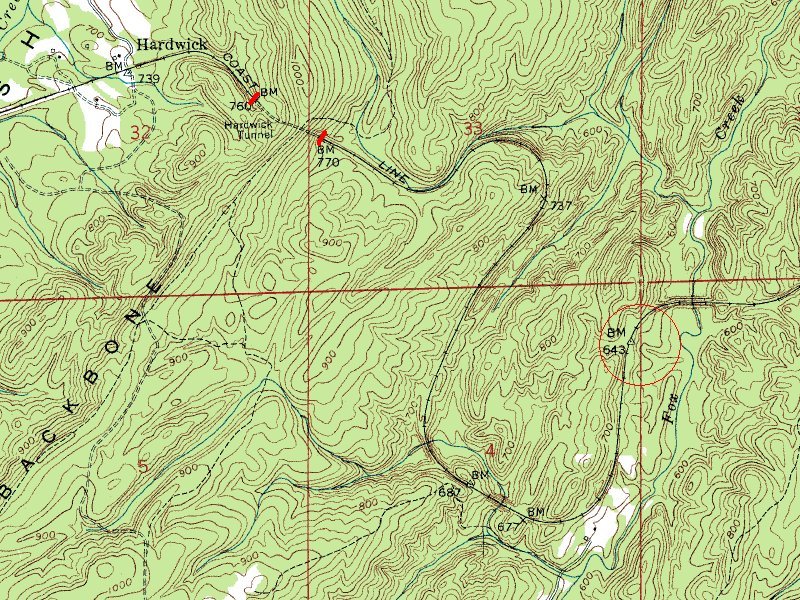 Tunnel west portal. Note the dates. The journal carefully explains the rebuilding of the original wooden tunnel of 1903 by a firm out of Atlanta in 1910-11.

Rail damage. There's some SERIOUS flange wear going on despite an oiler in the area. This is the rail on the outside of the curve.

Here's a shot of the inside rail. What a pounding it's taking. Can you imagine what steam locomotives did to this track?

Oh my, that has to be the worst track i'v seen in a long time, imagine a fracture in the rail here, it's what's on the cards pretty soon i recon.

Steve B said:
Oh my, that has to be the worst track i'v seen in a long time, imagine a fracture in the rail here, it's what's on the cards pretty soon i recon.
Click to expand...

It's pretty hammered, but I'm guessing the structural integrity of the rail web is as good as can be expected under such use. As you can determine from the link, this area has a historical reputation for rail breakage, slow orders and train derailments. That's why Glenn and I have been wanting to put footprints on it. It's a cool historical site with a lot of background info thanks to the foresight of EL Voyles to record it.

Hey Josh. Actually, I think the route is now part of the Alabama and Tennessee River Railway, but don't quote me on that.

Wow I thought that was CSuX track! I always wonder how FRA allows them to run any trains over 5 mph on some of their track! What is it Class 1, 2 track? CSuX is like the NE equivalent of CNW...

BNSF dude said:
Wow I thought that was CSuX track! I always wonder how FRA allows them to run any trains over 5 mph on some of their track! What is it Class 1, 2 track? CSuX is like the NE equivalent of CNW...
Click to expand...

Hum, I'm a CSX fan (but then again, I like them all ), and haven't really seen the track problems described in our neck of the woods. Folks on the CSX have been very good to us in our railfanning adventures... As I said, this section of track isn't owned currently by the CSX and is lightly traveled. I'm sure it has some serious speed restrictions and has had track problems throughout it's history dating to the early 1900s. I guess it's just the nature of the beast. I posted this not because the track is in rough shape, but because it's an area historic site.
Last edited by a moderator: Aug 24, 2006

Eric, does Glenn know what type of train runs on that track each day (coal, grain, mixed frt., whatever)? It would be great if he could catch one on film.

CSX_road_slug said:
Eric, does Glenn know what type of train runs on that track each day (coal, grain, mixed frt., whatever)? It would be great if he could catch one on film.
Click to expand...